At the Wooden Canoe Heritage Assembly there is a row of tents with different vendors set up, most if not all are canoeist's and some more famous and some not so in the wood canoe world.
I'm not sure where the pack basket lady ranks, and that name probably isn't on her letter head or shop door, but Wendy makes pack baskets of all sizes and prices.
She does it all by hand and even initials the bottom with the date. Last year I bought 7 of these and gave 6 away as Christmas gifts to my children and their spouses. $15 for a nice gift, and every one was well appreciated.
Her email address is wendyek at embarqmail.com, she lives in Warsaw, In.

yup. I think she makes big ones too!
http://forums.wcha.org/showthread.php?9918-Basket-weaver

Ok, so I recently posed this queston to Robin the other day, I will ask the board as well ... how many of you use packbaskets for tripping. I love them and have used them ... but anymore, the Duluth packs are all I use, I just find them handier. I sure love the look of a packbasket in my boat however.

So, anyone here use them for tripping?

Nope but I still like them. Mine hold a lot of yarn!

If you have ever had a hankering to make one. Adirondack Folk School has courses!

My godfather/uncle/scoutmaster (same guy) made one from oak splints a long time ago, and he used to use it once in awhile on trips (both personal/family or with scouts). I do know that he liked how it could stand up by itself and kept stuff (mostly food) from gettting crushed. We also used them at scout camp in the summer, to carry food from the commissary to our patrol cooking areas. I was a small, bony kid, and they never fit me, and rubbed in all the wrong places. But i don't think they got as popular as they were for no reason.

I also had a friend in middle school/high school who used one for his trapline... I carried it once in awhile when i walked it with him, or tried to, but once again, it rubbed in the wrong places. for him, it was a good pack because he had a lot of odd pointy things in it (traps mostly, but some stakes, a trowel, and some other tools, etc) and they didn't stick through it into your back, which would have been worse with a soft-sided pack. but he was a lot bigger than i was (he could set a trap bare-handed... i had to step on it to compress the spring).

I carried army packs (Alice and Lowe) for several years, had a kelty trekker, and something by a company called alpinlite (not alpen. alpin) All were uncomfortable. I picked up a used GoLite Gust at some point, which is a no-frame pack made of dyneema. I love it. perfect for my longer trips (i tend to pack light if there are portages), say up to 4-5 days (i know... infantile compared to some of you.) I also discovered an old german army 70s-era canvas pack, which is also frameless, and my favorite daypack. It's heavier than the dyneema, but i really like it. both frameless packs kinda hug my lower back, and they carry comfortably below 35lbs.

Bob B. said:
So, anyone here use them for tripping?
Bob.
Click to expand...

I've just used mine for light day-tripping especially when looking to harvest stuff for carving. Great to just throw cut branches in there and not worry about the accumulated dirt. Used it extensively when I was scouting around & harvesting spruce roots for a bark canoe build - a very messy process. In the off season it's used to carry most of my akward shaped tools - crooked knives, awls, saws, that kind of stuff.

There's a outdoor school ( Kroka Expeditions) in Vermont that gets the kids to make their own baskets and then use them as part of their 600 mile ski and canoe journey.

Some of their pics in action... 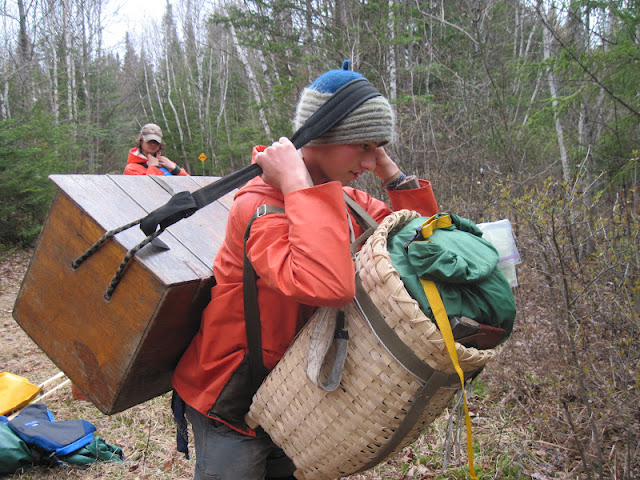 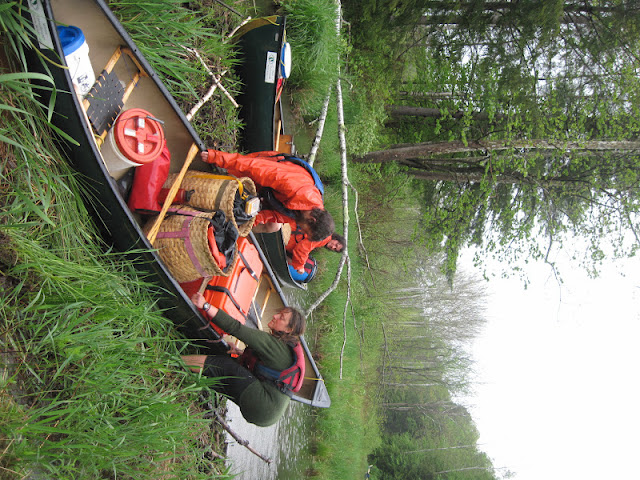 Thank you Robin! So glad for the input and your support!
G

I love the traditional look and feel of the classic Packbasket. I use mine for packing tools, picnics, photo equipment, etc. They are easy to use, rugged and they last for years.
..here's a few snaps of Packbaskets in use, from the woods and waters of the Adirondacks.

Basketlady said:
Thank you Robin! So glad for the input and your support!
Click to expand...

Your Welcome. Every one I gave to my kids is on display, mantel, by deer heads, and when not on display, well, the apple didn't fall far from the tree there, they get used to hold a cold beverage!

Toothlessannie:
Welcome to the site, and thanks for sharing those pictures, that's what they where made for.

Morat: Great pictures too, nothing like younger folks tripping in open canoes with traditional gear, Thanks, some real nice stuff coming to life here.
G

They're great for grocery shopping by bicycle without a cargo bike. But I'd rather use a soft pack for boating since I can squish it around to trim/fit stuff in.
You must log in or register to reply here.