Multi-purposing a tumpline and wanigan lid

While dabbling around on the net, I stumbled on this thread regarding lightweight camping tables on the BWCA forums. Seems like some folks have come up with neat plywood tables that setup on trees to get some basic gear off the ground.

I'm also familiar with the much more elaborate Mason Kitchen designed by Paul Mason. It's described on his site here. Saw it once at the Ostrom Outdoors booth at a trade show but not sure if they're selling them anymore. 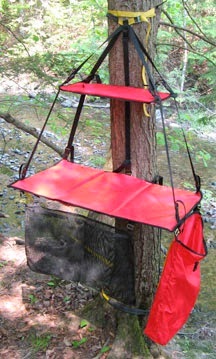 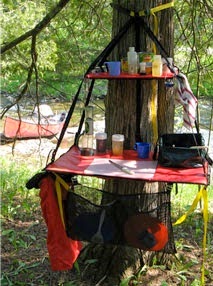 
Kevin Callan & crew often feature them in their many canoeing adventure videos. Here's a youtube video of the gang using it in Woodland Caribou Provincial Park. Don't know if it survived the stick stove usage...


Anyway, while dreaming about future backcountry trips I thought about the idea multi-purposing the tumpline on the wanigan to suspend the lid as a sort of tree shelf. I'm sure seasoned wanigan trippers have done something like this before, but haven't found any pics online.

So did a little experiment on the cottage property where I often set up my Hennessy Hammock to get a bug free afternoon snooze. Slipped the leather tumpline off the wanigan without untying the knots and threw the headband over the hammock's suspension straps around the tree. Suppose a low level branch could've done the same thing. The remaining tump loops went under the wanigan lid and the result is a functional & sturdy elevated table.

Here's a view from the side... 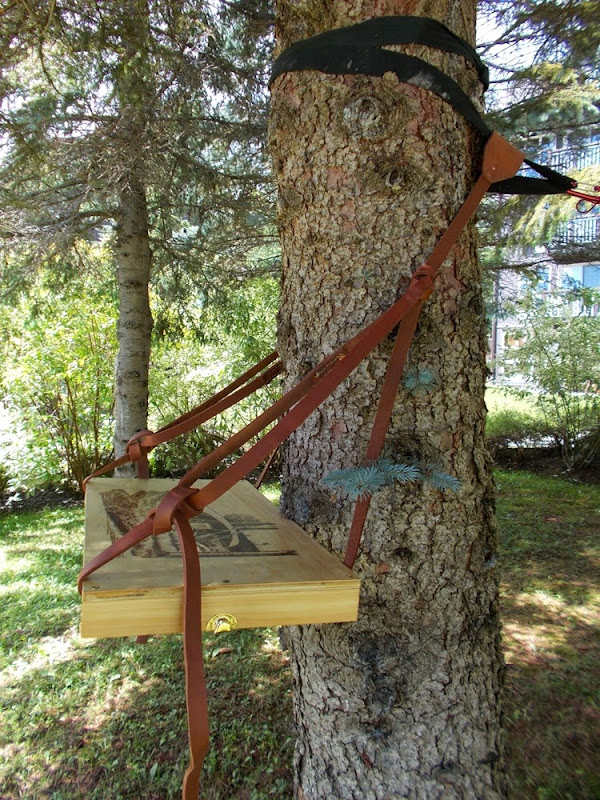 Loaded up the new shelf with some gear. On the left is a Trangia Mini cookset with an extra stainless steel bowl found at a thrift store. On the right is a separate SS kettle I like to use for the constant boiling of water for hot beverages. Can't tell, but there is a homemade alcohol stove underneath it along with the SS plate. A full flask of bourbon to round out the shelf. 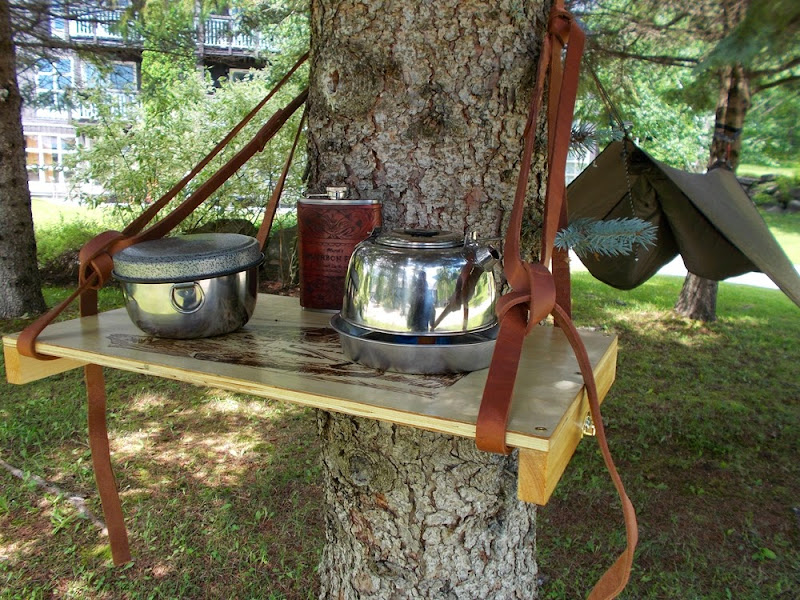 Anyway, it seems like a feasible way to temporarily rig up some usable work space in camp. Of course, the lid would have to go back on at night to prevent the critters from getting into the food supply. One of the excuses of lugging a cumbersome wooden box on a trip is the flat surface in camp. Put it on the ground and you have an instant bench for food prep & entertainment. Now that there's this hanging shelf option, I'm looking forward to getting some more usage out of it.

It's great when something can be used in more than one way.

I bet that leather smells great.

Cool, I just built a wanigan/seat for the 20 footer, it's an ugly thing, made out of treated plywood, but I might try that hanging trick later this week. Thanks for the idea!
You must log in or register to reply here.