Learning Experience - now, what should I have learned?

Took my light SOF build out on a new creek the other day, and created a bit of a pickle.

The creek I selected is a little pushier than what is normal in my area, due to an unusually high rate of drop. 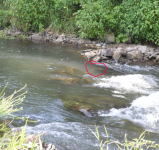 I tried to run the pictured riffle, and you can see the results below. (Stream is 25' wide at this point, the ledge itself is about 18" high) 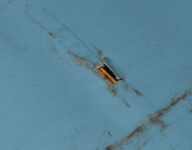 This is the worst of 4. Hit the middle four frames right in succession. left-down is forward on the hull.

I suspect that a hard-shell hull would have slid right off with not much more than a cosmetic scratch, but I'd rather avoid the run-in entirely.

1. I did (try to) scout. The circled area is not where I would have chosen to run, but current kicked me over at the last minute.

Any thoughts (other than "practice" or "try not to do that?")

Pictures of moving water are often deceiving, but possibly the green slot in the middle would have a little more water. The rock you circled doesn’t look to have much water over it on the downstream side. Locally here, my main paddling is on rivers and they are very low right now. I haven’t cut the grass here in 7 weeks it’s been so hot and dry.

In low water conditions I will usually upsize to a bigger canoe that will draft much less water. I might leave the solo with 350# capacity and take a tandem with 700# capacity and paddle it backwards. Than, I can paddle past the kayakers who are hung up on the rocks with out a single scratch. I only need about 2” of water to avoid scratches in a 16’ prospector.

I also find that if a boat is lightly loaded, kneeling in the dead center rather than sitting can get you through some skinny water.

Sometimes you just got to get out and wade the shallow spots. I don’t know anything about SOF skins, but I hope it’s an easy fix and you can try that middle slot and see if you fare any better. Did you temporarily duct tape that hole to finish the paddle?

Yeah, pictures are hard. I took four from slightly varying angles, and played with my polarized filter a bit, and that's the best of the batch. Let's try this with a different crop/scale, just to see if that makes a difference: 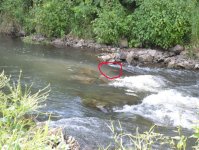 I run into issues handling my tandem without load, though I've never tried it on a stream like this. There were a couple of other areas where a shallower draft would have been handy. You're about right on that water depth...

Perspective is also playing with us here a bit. If I'd been 4-6" closer to the right, I think I would have missed the rock entirely.

My preference would have been for the center slot as well. but I got caught by something in the current about 10 yards upstream, and kicked over hard. Only time for a couple of paddle strokes, and the only thing I could do was line up as best I could on what was in front of me.

No duct tape along. (I will not make that particular error again) I did finish the (short) section that I had planned. Had to pull out and dump water 4 times in an hour. About 150# each time. I'm still thinking about a permanent repair. (The build was intended as a quick prototype for a hull shape, so I may just rebuild as strip/composite.)

The really ironic thing is that this is about 30 yards upstream of where I put in. Means I deliberately sought this one out...

The pointy uppy thingy to the Left of the suspect (right looking downstream )looks even meaner, You don't need me to tell you how clear the center slot looks. I would have wound up where you were too!

The thing I learned when I busted a hole in a stripper on a section of river that was too steep and pushy and shallow to maneuver is that you either have to scout really good (which may not be possible) or get out and wade. You have to play the game a little different than you would in a royalex or tuff stuff boat or it may be crap shoot.

If the water had been slightly stained, that rock wouldn't have been visible. That sucks!

sailsman63 said:
Any thoughts (other than "practice" or "try not to do that?")
Click to expand...

Yeah, but it's going to sound rather blunt.

That's looks like a pretty trivial rapid -- easy 2 at most. A paddler shouldn't run any whitewater in a SOF unless he or she has the technical boat control skills to dominate the river rapids at issue. God invented wood-canvas, then aluminum, then various plastic boats for banging down boney rapids that are at or above the paddler's skill level. I'm not clear, however, why god let Royalex go extinct, which was the best of all for that purpose.

If something knocks you off your line before a drop, the back ferry is an important skill to move laterally onto a better line. A solo back ferry requires a very strong backstroke and cross-backstroke, often alternated. Here's a guy doing it sort of okay on flatwater at the beginning of this video. His boat is inefficiently plowing the water while going in reverse, resulting in poor control, because he's seated too far astern, bow seat backwards. Ideally, you should be in a centralized solo seat when back ferrying (and doing just about anything else) in river currents.


Experience will eventually improve the ability to read squirrely and murky waters, but comes at the price of many misadventures. You've made a down payment.
S

Glenn MacGrady Thanks for the feedback. I appreciate the directness.

You're right that that should be a fairly simple rapid. I'd be shocked if it even made a class II, but I'm not one to be able to judge.

I definitely will be working on some of those skills in flatter water. I'll also be retiring the SOF to quieter locations, as the internal setup has me to high off the bottom for this kind of thing anyway.

I'm thinking that I was getting overconfident about what the SOF could take, based on some previous experiments in less... active circumstances. It's also a fairly flexible hull. Too flexible, I think, so it sometimes does not cut through the water the way I expect.
S

yellowcanoe The perspective here is fooling you. The "Pointy uppy thing" is about 3 feet to the side. (measured perpendicular to the flow) I still think I would have preferred the next slot over, but I'd have to take a closer look when I'm not on an adrenaline high.

Waterdog lowangle al One of the tricky thinks about wading here is that these are not really ledges, per. se. They are artificial fish weirs to improve the trout habitat. Basically "We're going to build a mini-dam out of loose breaker boulders with no sealer on the upstream side."

The water half a canoe-length upstream from the weir is probably 5' or 6' deep, so nothing to wade on.

The rock you hit was the insidious type I call "hiding rocks", which lurk just below the surface. Even the best of us hit them. I've done so even in apparently smooth water after rapids.

One hiding rock knocked me over into a potentially fatal pin on a bigger wrapping rock in class 1 water when I was an experienced class 4 whitewater boater 30 years ago. I was seated on a kneeling thwart and when the hull began to wrap and collapse, the kneeling thwart grabbed my calves like a vice. I escaped only because I was able to tear the entire kneeling thwart off the hull to which it was epoxied. I vowed never again to sit on anything other than a pedestal or saddle in whitewater. I kept that vow until a few years ago when I did run some class 2 rapids in my dropped seat Hemlock SRT.

I've never paddled a SOF, but I understand their flexibility to have some advantages in soft (rockless) water waves. Obviously, they are less than ideal for hitting hard things.
Last edited: Aug 22, 2020

From looking at the picture only and being unable to see the immediate downstream I would probably have taken the right channel.

Of course it should be known that if there is a rock to be found I can usually find it and that is why some "friends" refer to me as The Canoe Killer!

Don't try that with a skin-on-frame.
M

Mike McCrea said:
Don't try that with a skin-on-frame.
Click to expand...

I think canoes are made to be used, w/c included. I have paddled a lot of miles in an Old Town red cedar on white cedar. A little Ambroid cement and a patch and down river you go.

I know if I get knocked off my line and I'm out of options and things look grim, I point my bow into the teeth of the monster and paddle hard with a Mohican Whoop. God help any dinky kayaker who chooses to stay on the wave! If you always carry a water bottle, wrap some quality duct tape around it so you always have some. It's a common tip, but one that I've found to be simple yet brilliant.

dougd Ouch! I hope the people involved were okay...

Waterdog Thanks for the duct tape tip. Unfortunately, I've been experimenting, and found that this hull material does not like duct tape at all (Or Gorilla Tape) I'm really not that vocal when things go belly-up, but otherwise, that's about what I had to do. Maybe two paddle strokes from the time I got kicked over till I was in the chute.


Several people asked about the right channel and downstream context. I should have taken a picture from the footbridge that is just downstream, but here goes:

Right Channel: There was a largish rock sticking out from the bank just to the right of frame, and would have been hidden below the grass level anyway.

Downstream: This is about it. Clear channel for at least a couple hundred yards, and what's after that is more sand/gravel bar, not worth worrying about.

Upstream: About 30 yards upstream, there was a smaller drop, with a turn in it. That one I was able to run without trouble, which probably contributed to me being a little overconfident...
You must log in or register to reply here.