Part by plan and part by Covid I have not done much paddling this year. No early Spring day trips and only an 11 day trip on the Riviere Noire (Ottawa Valley) in early June with my usual partner Sam82.

I have been thinking about September, getting out for a few weeks of solo tripping, something not too difficult but with at least a few decent rapids and hopefully some nice campsites. A route that offered simple logistics would be ideal and to that end I pulled out my copy of The Canoe Little Atlas of the Little North. I have previously been to the Pickle Lake area of Northwestern Ontario; in 2016 I paddled the lower section of the Otoskwin and the Attawapiskat to James Bay and in 2017 From Savant Lake via the Albany River to James Bay. I decided on a route that starts from Lake St Joseph, 58km south of Pickle Lake right off Hwy 599, I will paddle the length of the lake and then via a series of lakes upstream on the Cat River. Many of the river sections between the lakes have swift water and/or short rapids, which may require portaging or wading.

Once I reach Cat Lake I will portage and pond hop the height of land to reach the headwaters of the Otoskwin River. This half of the trip will be mostly river travel, there are about 30 sets of rapids on the Otoskwin, and some will be mandatory portages, others I may be able to run or line. I will end this trip at Badesdawa Lake where the river meets Hwy 599 about 50km north of Pickle Lake. This was the starting point of my 2016 trip and means I will have paddled the entire river.

Water levels will likely be on the low side, this may be helpful during the first half upstream to Cat Lake, I am hoping that September will bring enough precipitation to cover the rocks during the second half. Temperatures will be somewhat unpredictable, mid to high teens with cool single digit nights would be the norm but extremes at either end are expected.

In addition to the information in the Canoe Atlas, I have some additional information/notes from two previous trips over the same route, one from 2012 the other from 1988. In most years one or two camp groups paddle this route or parts thereof, there is local traffic on the Cat River section between the Native communities of Osnaburgh, Slate Falls and Cat Lake. On the Otoskwin side, there are a couple of fly-in outpost camps that might be occupied but with the Canada/US border closed I expect the area to be very quiet.

It seems that most groups take +/- 18 days to complete this 430km route; I will be paddling at my usual slow place and taking layover days when conditions are unpleasant or I find a particularly nice camp. I am planning for 22 – 24 days and expect to start paddling on September 8th or 9th.
I will be tracking via InReach again this trip; I will post a generic message when I depart in the "morning" and again when I reach camp in the evening. Every day or two I will post a lengthier (but still short) update on what is going on.

You can follow my InReach track and messages here:

That page will default to the current active track so click the "See All Tracks" button in the upper right to see the complete tracking from the Put-In. Click on Messages in the left sidebar to see all of the messages and use the "layers" button in the upper left of the map to switch to satellite view.


You can view my entire planned route here:

Click the Map Layers button to modify the layers of the map to view Topo maps (taken from the original printed Government of Canada printed maps), Satellite imagery and a few other available layers. The default view shows a satellite view with a 60% layer of topo map on top, you can play around with this if you are so inclined with the slider percentage to show only the topo or only the Satellite of a combination of both. 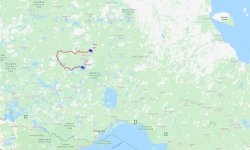 Water levels have been very low this summer. However, the rain has been coming down in a very steady fashion for the last week, and it looks like it is going to continue. Pickle lake is supposed to be getting 35 to 45 mil's tomorrow. The local rivers are bone dry right now though.

Sounds like a nice trip. Thanks for posting the links. It will be fun to follow your progress. Be safe and have fun!
C

@recped How did this trip go? I haven't come across a trip report. Looks like a great route and would love to know more about it.
Cheers, Camerai

The trip was a complete failure but still quite enjoyable!

Lake St Joseph is a big lake, September is a windy time of year in that part of the world. The trip started out as planned but on day two I was blown off the water after covering less than 2km (still within sight of my first camp). On day three I made some good progress and camped on a small island where I became windbound for two days. it should be noted that on these long solo trips I often lay over when conditions are unpleasant, one of the benefits of having not having a firm schedule, no worries, I just assume "I'll make it up later".

I had originally figured on five or six days to reach the end of the Lake but I was now at day eleven. The wind had diminished but was replaced by steady rain and once again I was delayed. While waiting out the bad weather I decided that I was so far behind schedule a change of plan was necessary.

Instead of continuing north on the Cat River I spent the next 10 days touring (basically circumnavigating) Lake St Joseph and returned to my put-in on day 22. It was an enjoyable and relaxing trip, the fall colours which were just starting on day one were in full display by the end. The combination of the end of season timing and Covid meant there was almost no one on the lake (met one motorboat in three weeks) so while a failure it was still a pleasant trip.

@recped thanks for updating/reply. Glad you still found the silver lining in the abysmal weather. I’ve watched a few of your vids and read your various trip reports, you have a knack for making do with whatever comes your way.
What a long strange trip its been
Cheers, Camerai
You must log in or register to reply here.