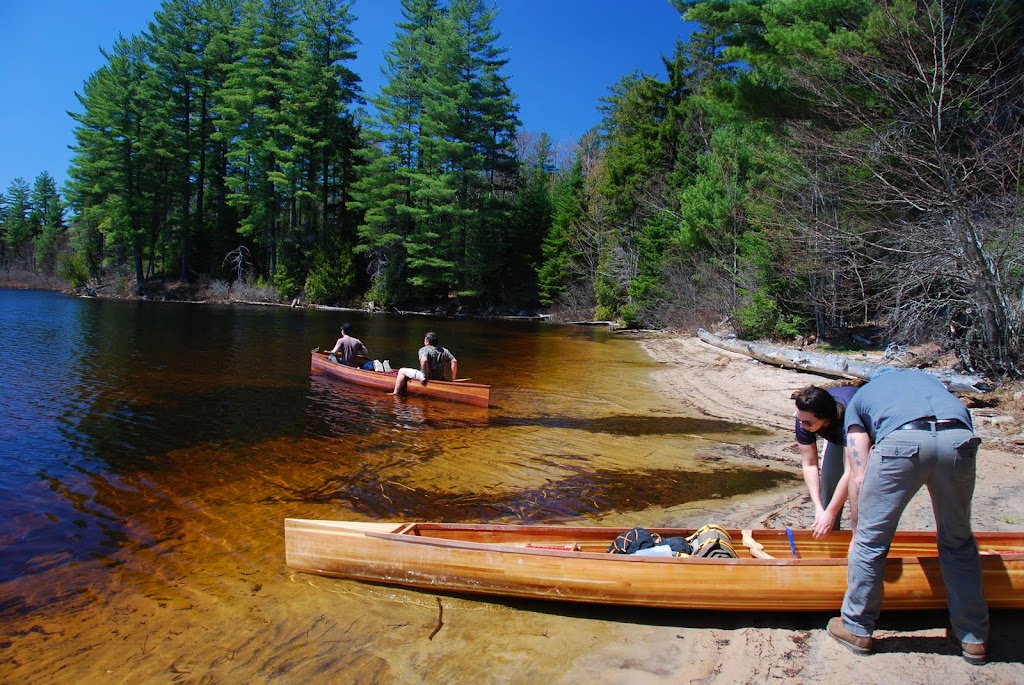 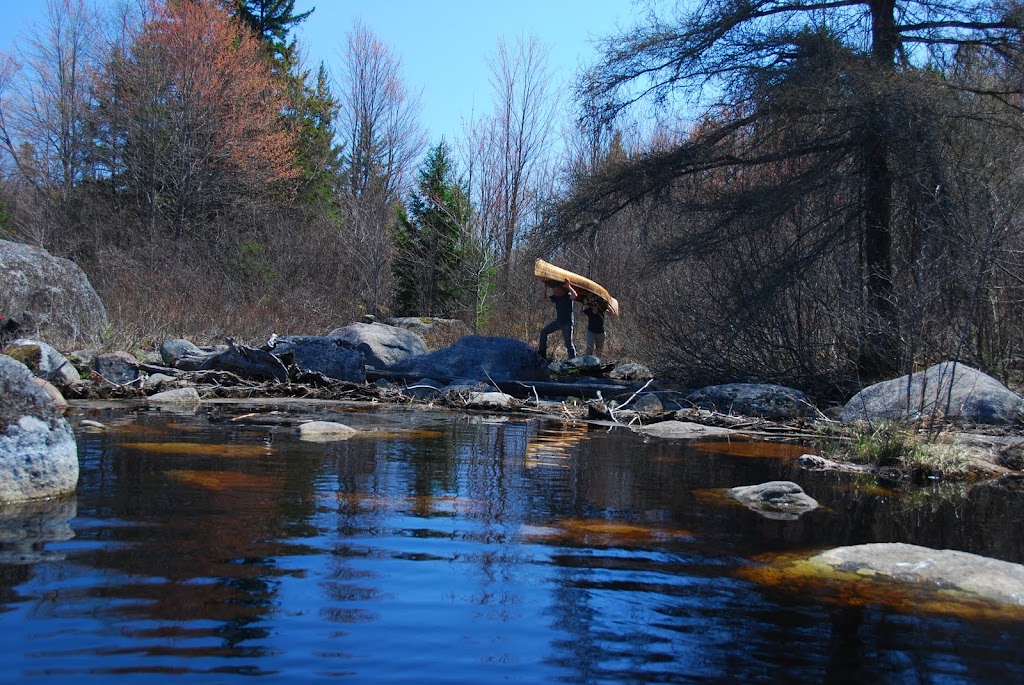 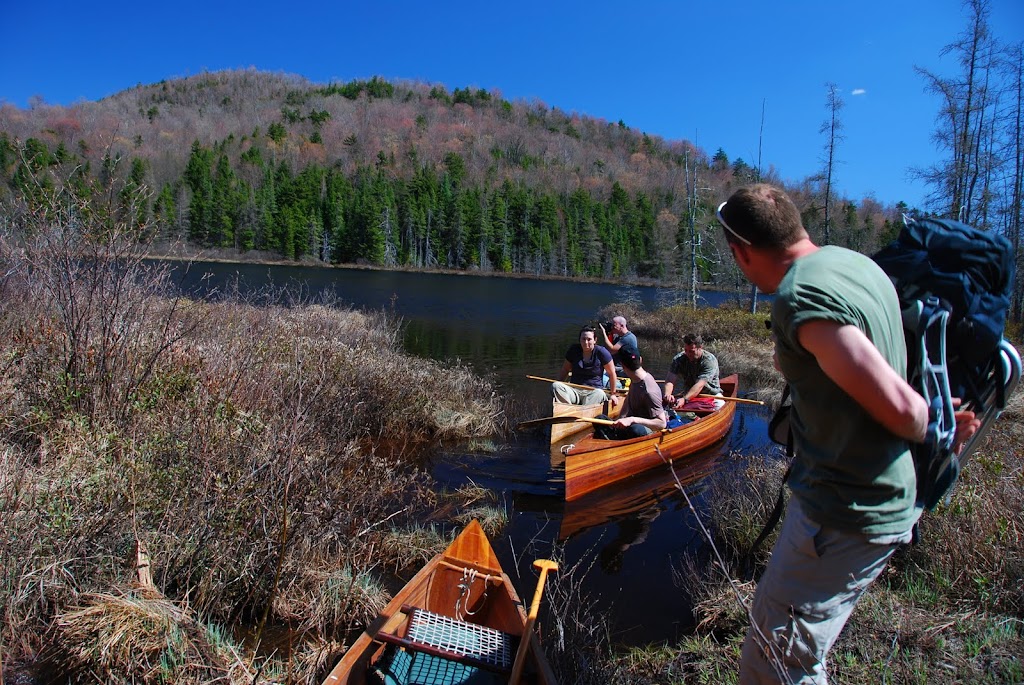 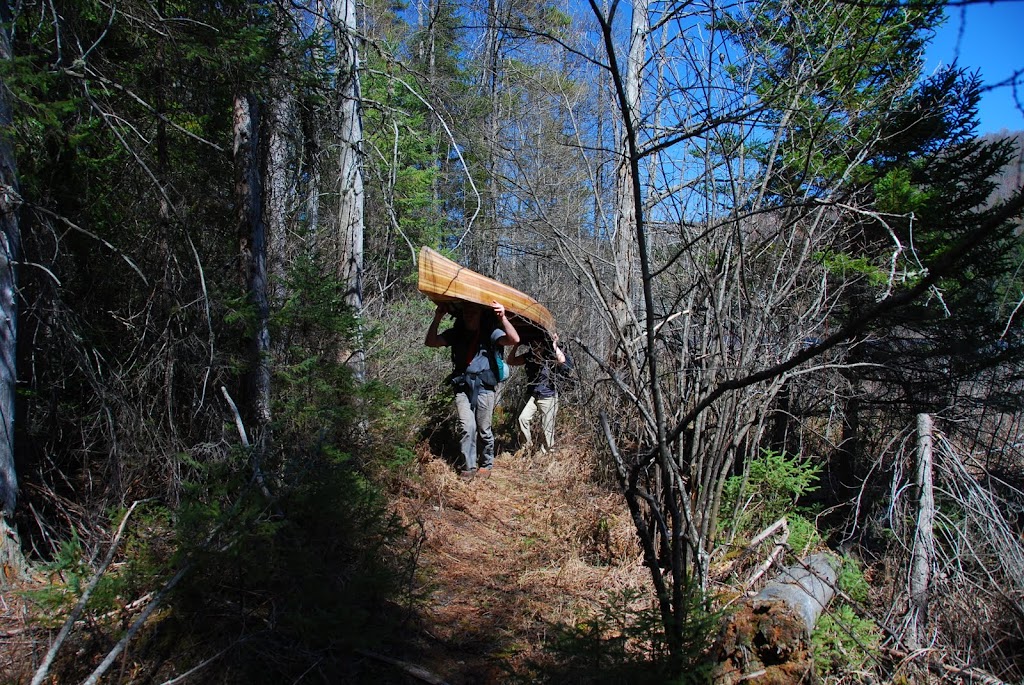 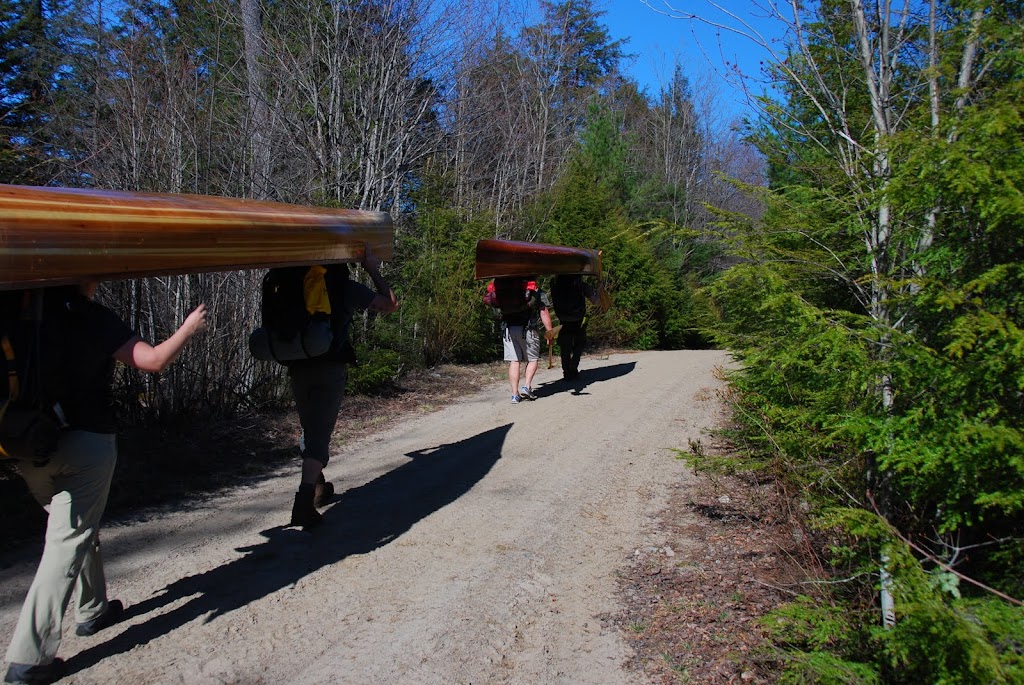 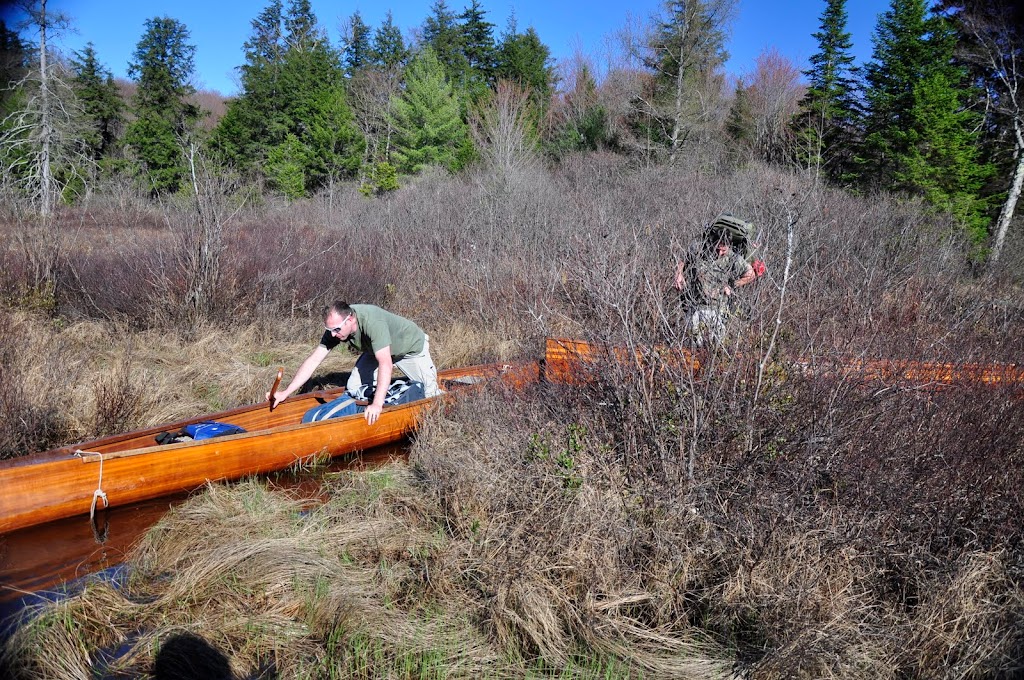 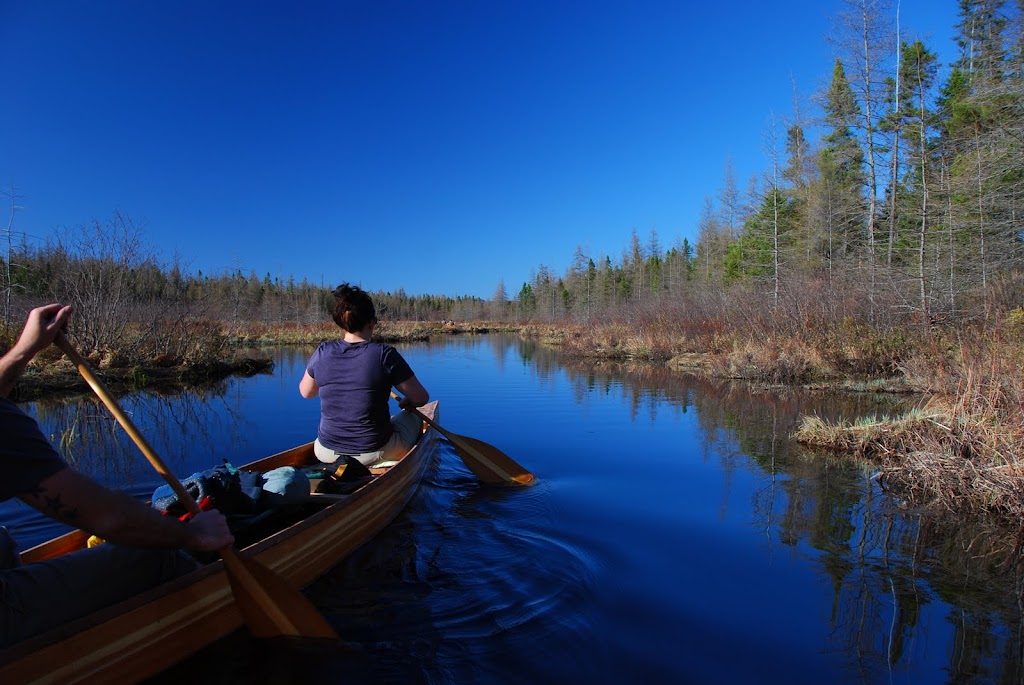 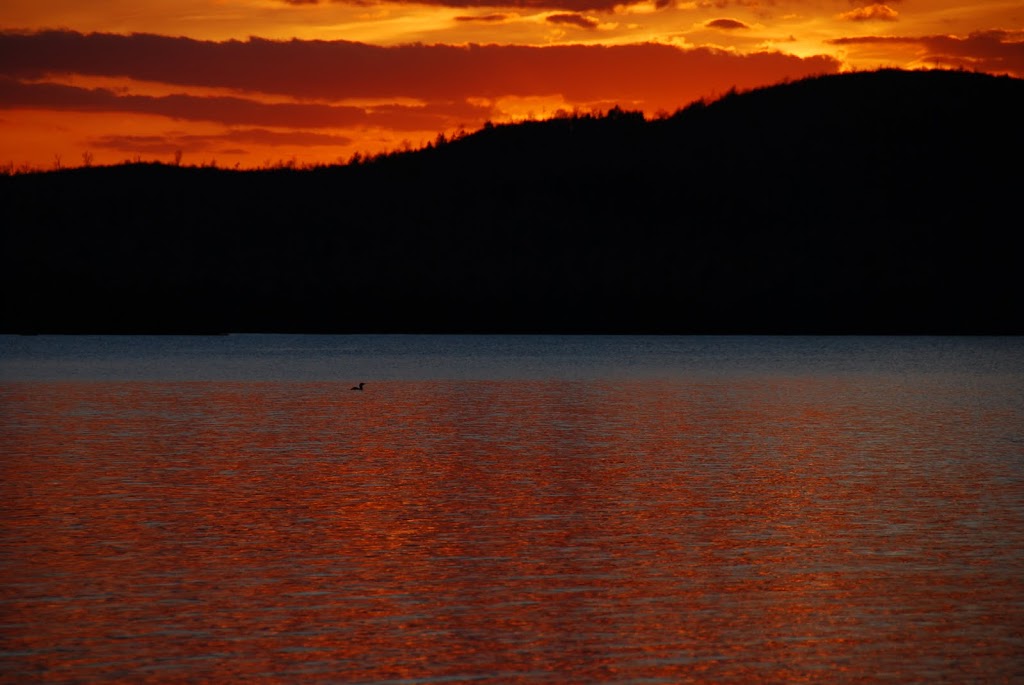 Next day, scramble up Grass Pond Mt, paddle to another site... 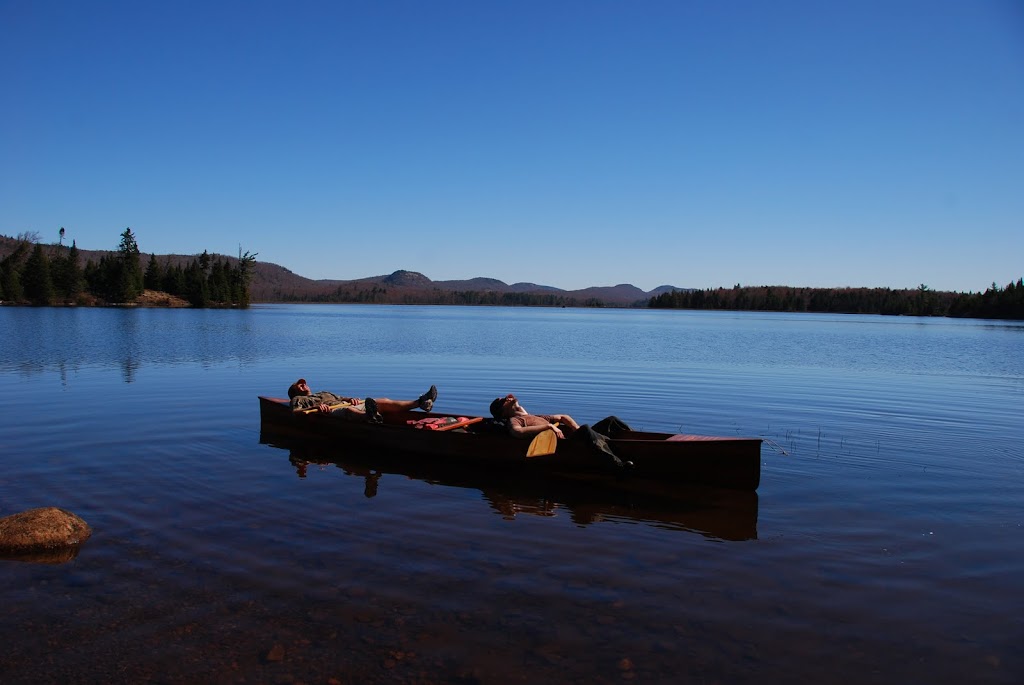 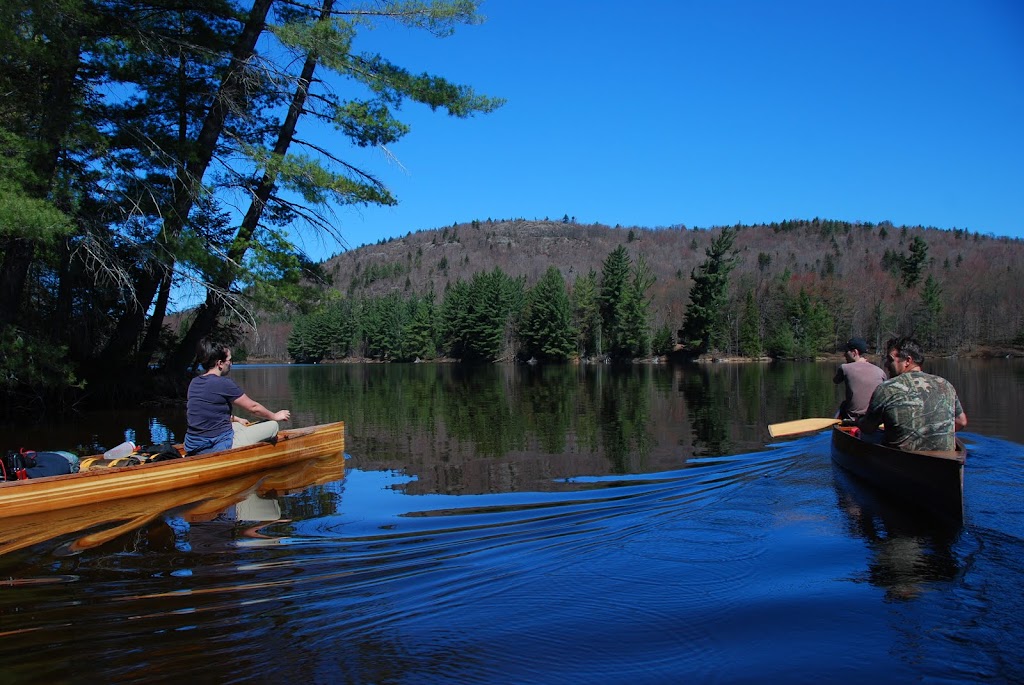 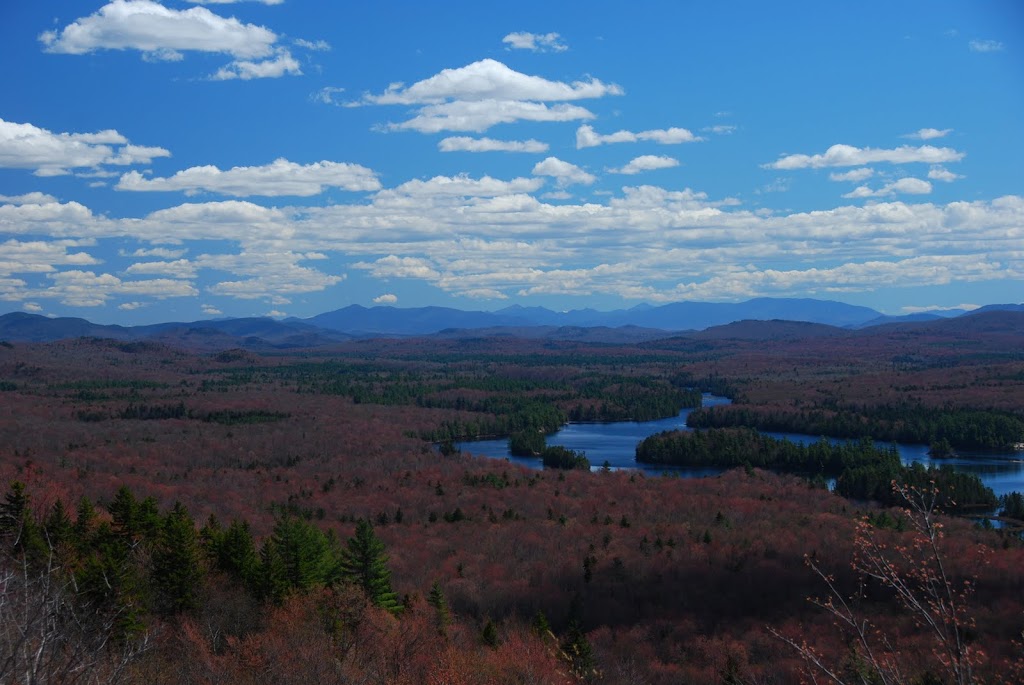 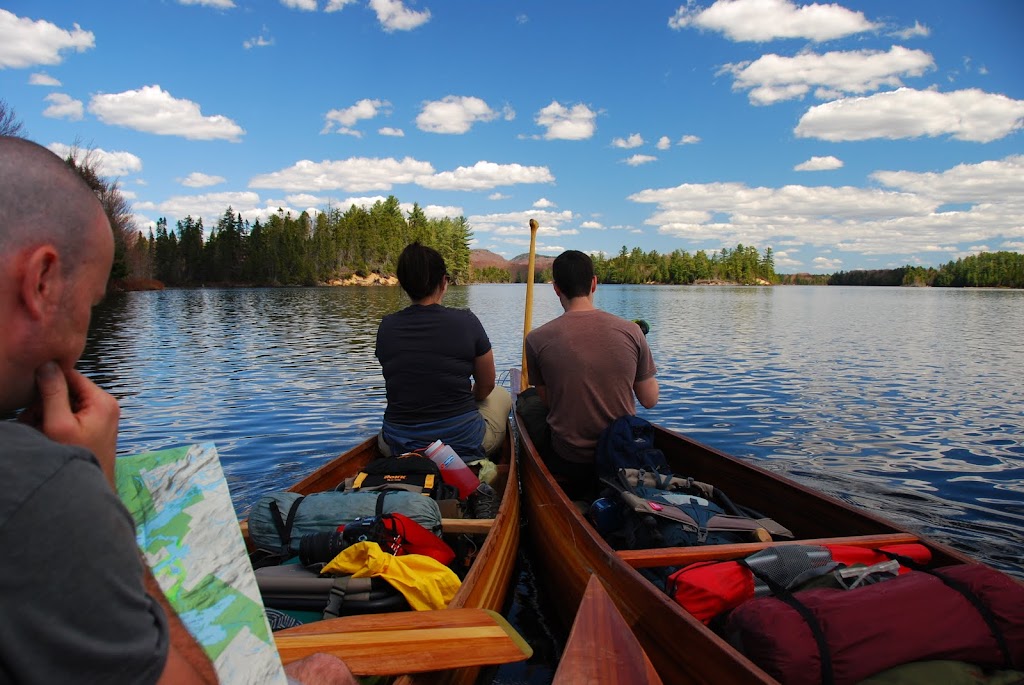 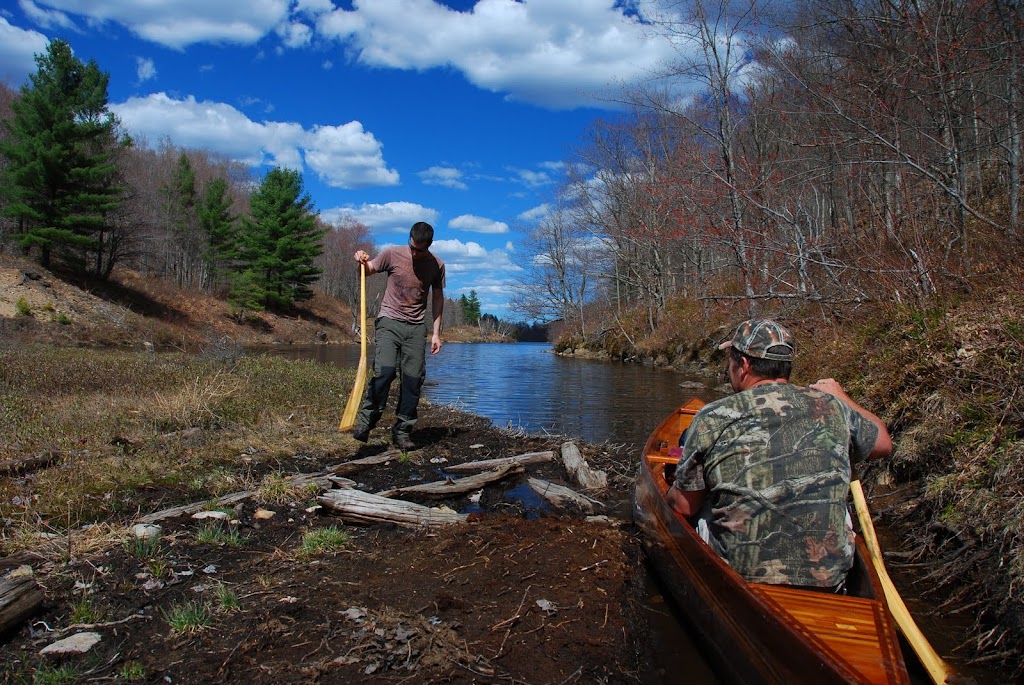 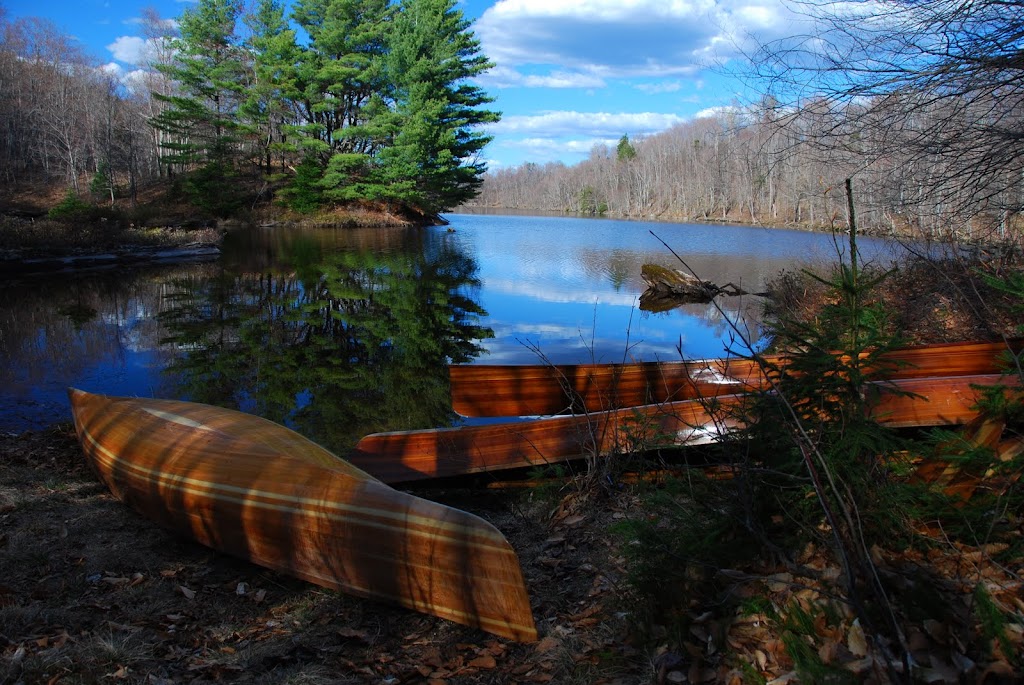 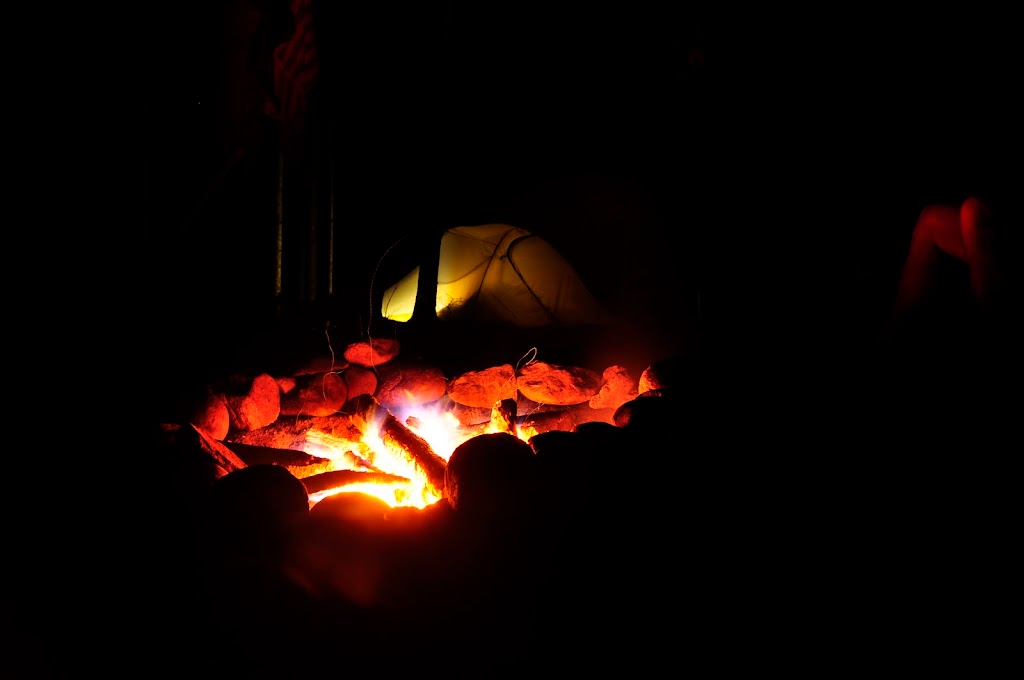 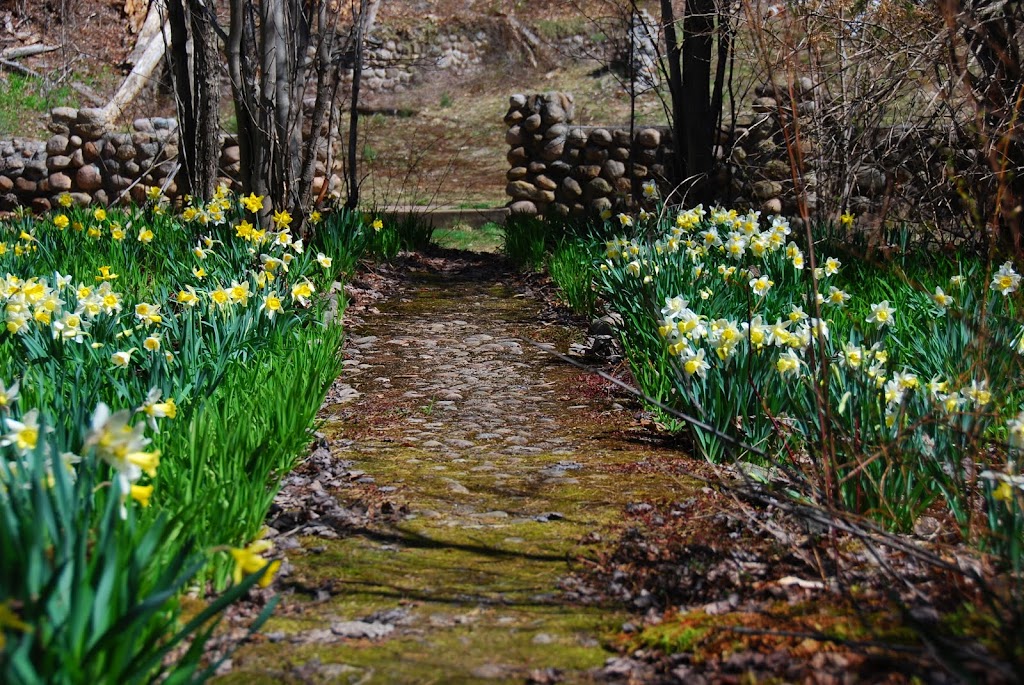 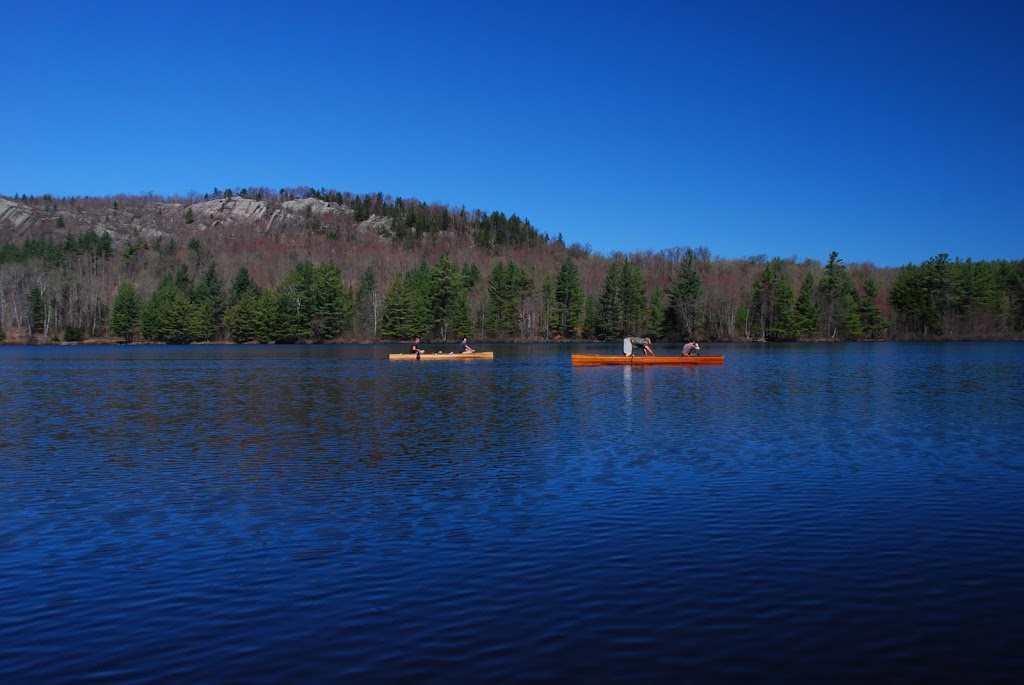 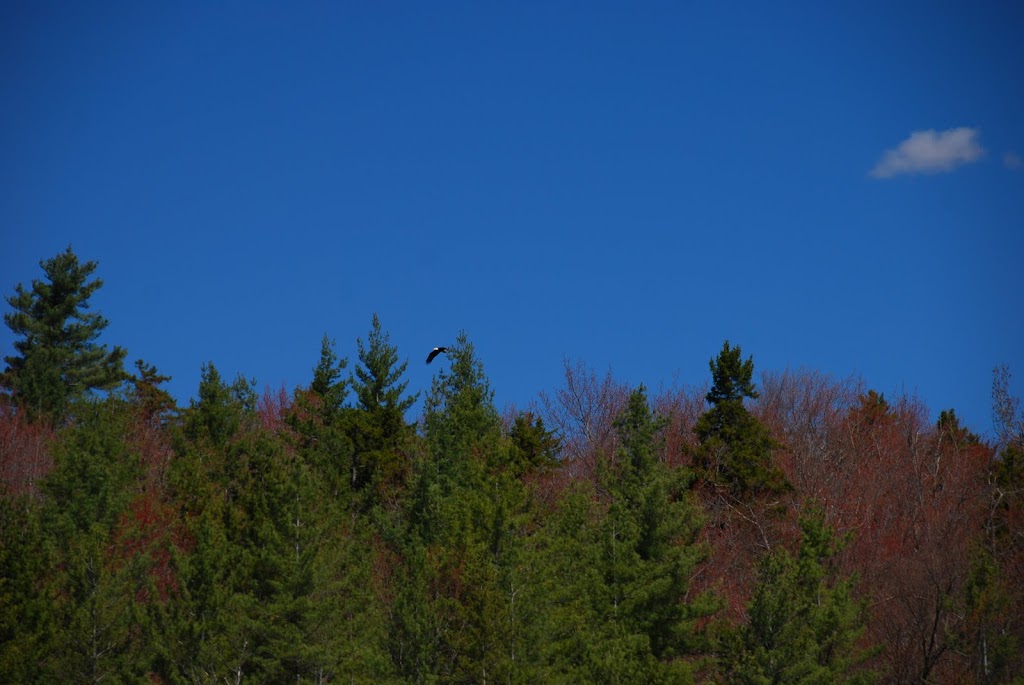 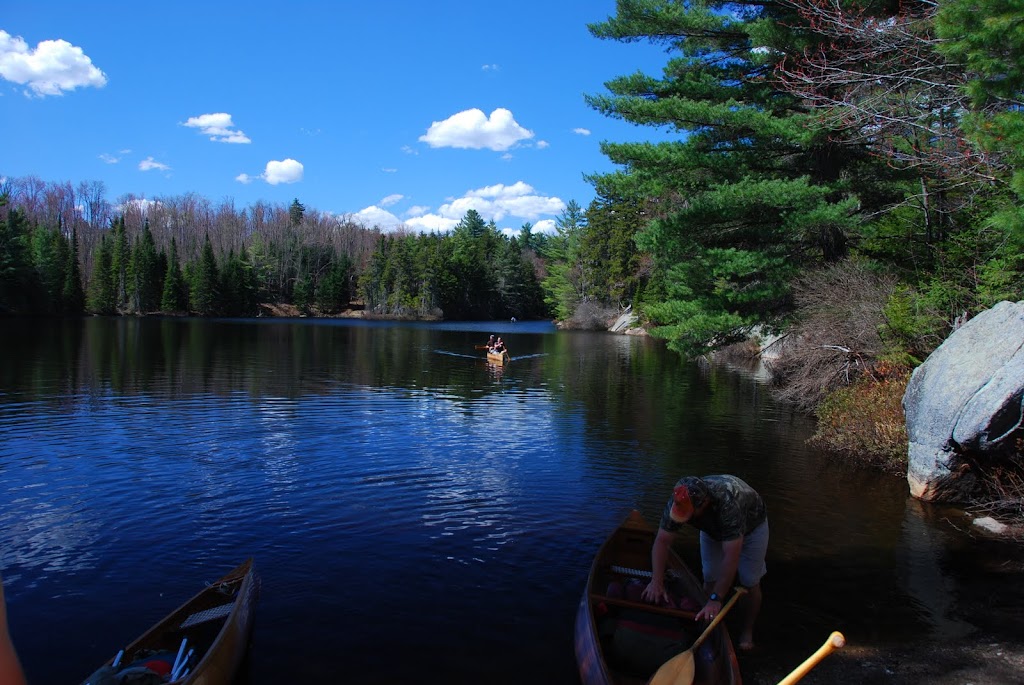 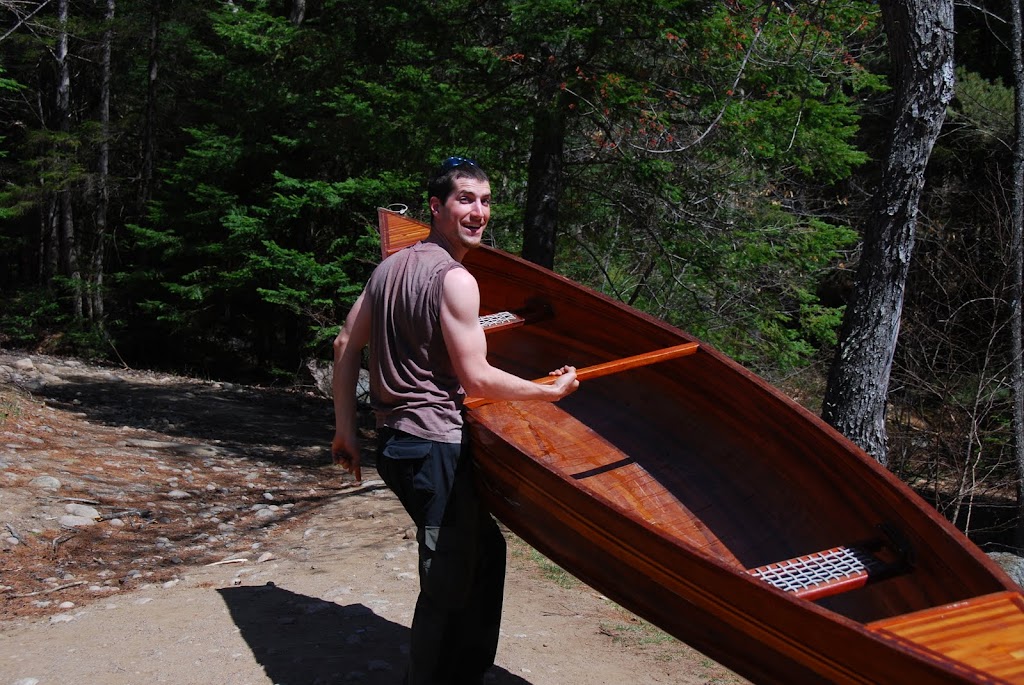 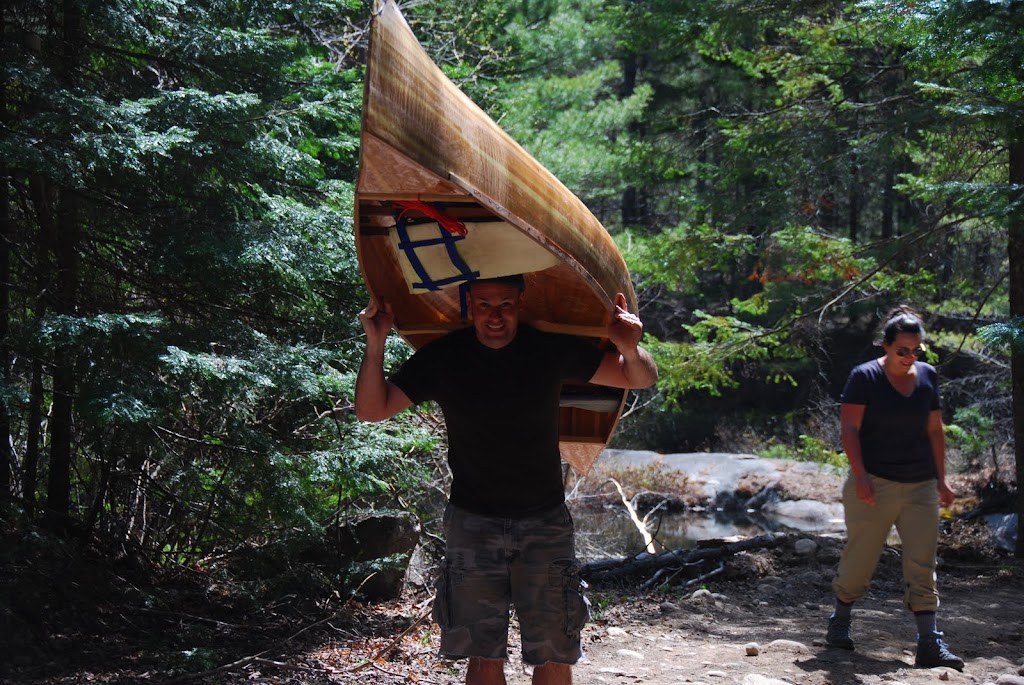 I give up; I can’t pick out my favourite photo.
I love the shot of two canoes just setting out onto a glassy lake, with the wrinkled blue sky mirrored in their wake; or the one with a bow paddler dipping into the deepest watery indigo I’ve ever seen…
Nice trip, even nicer memories. Thanks for sharing.

Great photos! Thanks for sharing.

Thanks, guys...we just plain got lucky with the weather, probably the best early season trip in 30 years!!
And the canoe that my nephew is paddling with his GF that looks old? That's actually a brand new, unfinished build. He calls it a tribute to my 28 year old 17 footer that was crushed in a cross current last spring.

Brad, I would think you have your iternerary all worked out by now, some of those photos wre for your benefit.

I do post frequently on another forum, one strictly oriented towards the Adirondacks. We bumped into a pair of paddlers from Tennessee while we were getting set to climb Grass Pond Mt. The fellow knew me by the boats, turns out he was a lurking member of that other forum. My S-I-L heard the fellow quietly tell his lady "Honey, get the camera. I want a picture of Stripperguy". Turns out he had been following the build of my nephews boat and recognized him as well... Talk about a small world!!

Thanks for the great pictures, looks like the perfect weather for a spring trip. The boats really look good on that blue water. Interesting portage on the road, looks like you all are having a good time.
P

Amazing pics!!! Makes me wish I was there!
G

Thanks for the eye candy Stripperguy (the scenery AND the hulls). I'm trying to make sure we'll have enough "down time" in the Lila-Low's route to just take it all in. Your photos convince me we're gonna need to practice remembering to breathe.
Take care, Brad.

which made my focus on things colorful on the ground

I too feel the urge to egg Brad on..though I suspect that is not needed.
G

Ah, springtime! I’ve yet to go paddling this time of year, but I do love the first sprays of bright green through the trees. The spring flowers of Trillium and Hepatica are scattered across the forest floors here now, making it impossible to return from woodland walks in a somber mood. Thanks for those gorgeous photos YC.
I’m sitting at my kitchen table over a jumbo- sized latte, enjoying my flowering garden of tulips, violets, and daffodils; which reminds me it’s time to mow the dandelions. In the meantime, I’m thoroughly enjoying the egging on thing.
Am I the only one who edits and adapts their wish list of places to go in the world? Two new places were added to mine a short while back; that campsite in that little beachy bay on Lila, and the top of Grassy Pond Mtn with that Adirondack vista. Okay, the third would be portaging down that rail line. That looks too weird to be true. Okay, the fourth would be Shingle Shanty…I think I’d better start spreading parts of my list over multiple trips. Meanwhile, please don’t spare the egging thing.
I believe that moderation ought to be enjoyed in copious amounts.
Thanks for the inspiration, both of you. Oh, and Stripper, what is an unfinished build? (I’m a plastic paddling guy, who in the DIY woodcraft world, has called a truce with my carpentry tools.)

Brad,
My anonymous nephew (his screen name on another forum) didn't have time to finsh sand and varnish the exterior of the hull and his gunnels, seats and thwarts.
So his build actually resembles the boat that it replaces. Thart boat was crushed in the current last year on Round Lake Outlet...it was a fitting end to a trusted servant. Now, it lives on in the form of picture frames for those that were there.

And, no, you're not the only one that has lists of destinations that grow long... I have been paddling, hiking, camping in the Adirondacks since I was a lad, and yet, my list of new places to visit grows ever more. Especially these next few years, NYS is in the process of adding much public access to previously privately held parcels. The private owners were excellent stewards, I hope that those that visit in the future will be respectful and treat the waters and land as it should be.
G

This is killin me! I spent the year up at the ESF Ranger School over in Wanakena. I was going to canoe/hike to grass mt. but ran out of time. Guess I will just have to go back

Our gang is now planning a "manly" day trip starting on Cheney Pond, continuing down the upper Boreas, and ending at the Rt 28N bridge. It's only 6 or 8 miles...
2 waterfalls, 5 sets of rapids, no trails, herd paths or established carries. Just the way we like it!!
Trip report and photos in a few weeks.
G

stripperguy said:
So his build actually resembles the boat that it replaces. Thart boat was crushed in the current last year on Round Lake Outlet...it was a fitting end to a trusted servant. Now, it lives on in the form of picture frames for those that were there.
Click to expand...

Is there a tellable tale there? Having been through the Round Lake inlet a few times I'm curious.

Mike McCrea said:
Is there a tellable tale there? Having been through the Round Lake inlet a few times I'm curious.
Click to expand...

Yes there is, Mike.
There wwas seven of us in 4 boats, all strippers.
I paddled tandem in my buddy's comp cruiser.
My nephew paddled solo in my DY.
My son and his now wife paddled my 18 foot speedster.
My S-I-L and his buddy paddled my 28 year old 17 ft stripper.

The 17 footer was showing its age and carried many scars, truly, its days were numbered.
Between the 2nd and 3rd sets of rapids, most of us pulled to the shore (E) to hop around the rapids. I prefered to run this short set, but my buddy was concerned about his hull and his hand. He had carpal tunnel surgery only a few days prior...this is yet another story, but let's just say it didn't go well for him.

Back to the river.
S-I-L and his buddy missed the most convenient pull out, and decided to aim for the next opening in the rocks and undergrowth. Between the river's narrowing and subsequent increase in velocity, and their chosen route, they got turned fully sideways in the current. I tried to explain the effects of differential velocity to them, but it was wasted.

Next came the cardinal sin of paddling on moving water....they tilted their upsteam gunnel below the surface.

And that was that.

In the blink of an eye, they were swamped, the boat pinned, and quickly crushed.
Both guys were OK, except for being wet and cold. Since this was just a day trip, there was little gear to retrieve.They managed to pry the boat free and drag it to the carry path.

Amazingly, some of the boat remained, it sort of popped back into shape, but with severe cracks, splits and snapped gunnels and thwarts.

S-I-L found an old shovel, and some drift wood. We cut the shovel handle to use as a brace, the shovel itself as a patch and the drift wood also as a patch. We donated our stringers from the other boats to tie everything together. It hardly survived the next carry, but somehow, they did continue to paddle it. They had to stop every few minutes to get out on shore and empty the boat. It leaked severely, as you might suspect. And so we traveled the rest of the way to the falls.

That poor, dedicated boat stayed on the racks, S-I-L and buddy hiking back to our site, and the next day, hiking out to the cars.

The boat was not reparable, too many splits and cracks. It really is a miracle that they could even have paddled it.
Sometime last December, I cut the boat into pieces to discard it, saving some sections.
It was a sad day, I had built that boat when my daughter was but 1 1/2 years old, now her husband was using it.

I converted those saved sections into photo frames, with each person from the trip receiving a framed, relevant photo. The guys (and gal) cherished that gift.
It was a fitting tribute to a trusted companion.

Everyone from that trip says that was the highlight of the trip, memories that will surely last a lifetime.
You must log in or register to reply here.

NOT... the Whitney Wilderness Loop (as I had planned)