I just got a deal on a smaller hot tent and I was looking at the GStove from Norway. Anyone here have any experience with this stove? My Four Dogs stove would be a bit much, I think.

I just bought one, will be getting it on Friday. Think it will be alright for a small tent, I got it for my pop up ice fishing shack. Three inch pipe. From what I have read, even the xl, which is the one I am getting, is underpowered in a full size tent at cold temps.

Hey mom! How are you and the family doing? Hope all is well. I was planning to take the new pup up there for grouse this fall, but you got the place locked down!

I am getting a Luxe brand Megahorn Tipi made with silver impregnated 68D tafetta. It’s a hexagonal with 6’ panels and a 7’ peak, so about a 12’ corner to corner and 106 square feet. The G stove looked like a good choice for ease of use and held the weight of my 4 dogs. I’m picturing using it on early/ late season Rocky Mountain trips and maybe even some ice fishing. I find even on summer fishing trips in the upper Rockies here I enjoy being able to dry out my stuff and myself. Plus Norwegians designed it...

let me know what you think of it as you use it. Best price I’m seeing is about $350 for the basic model here.

All good up here, hope you guys can come north again soon! I'm actually getting mine from a guy who had it in a large-ish canvas single pole tent. He used it about three times, but was worried that it wouldn't cut it when the temperatures got down around - 20C or lower. I'm going to run two stoves in my pop up, the g stove for daytime heat, and the Nuway propane stove for overnight. Have a look at those Nuways, they are pretty cool too.

Tried out the G Stove last night in my new Eskimo Outbeak 650 pop up ice shelter. These pop, ups are pretty cool, the 650 is very large, my wife and I plan on spending many weekends in it.
Anyway, the GStove is a thing of beauty. It is very well made, exudes quality. The damper control is second to none, with some practice, I will have it down to a science. It is very efficient, I was burning dry poplar, not a great wood, but a sled sized pile lasted me 8 hours, and we weren't scrimping with the heat. It was -22 C outside, but as you can see from the pic below, we were very toasty. 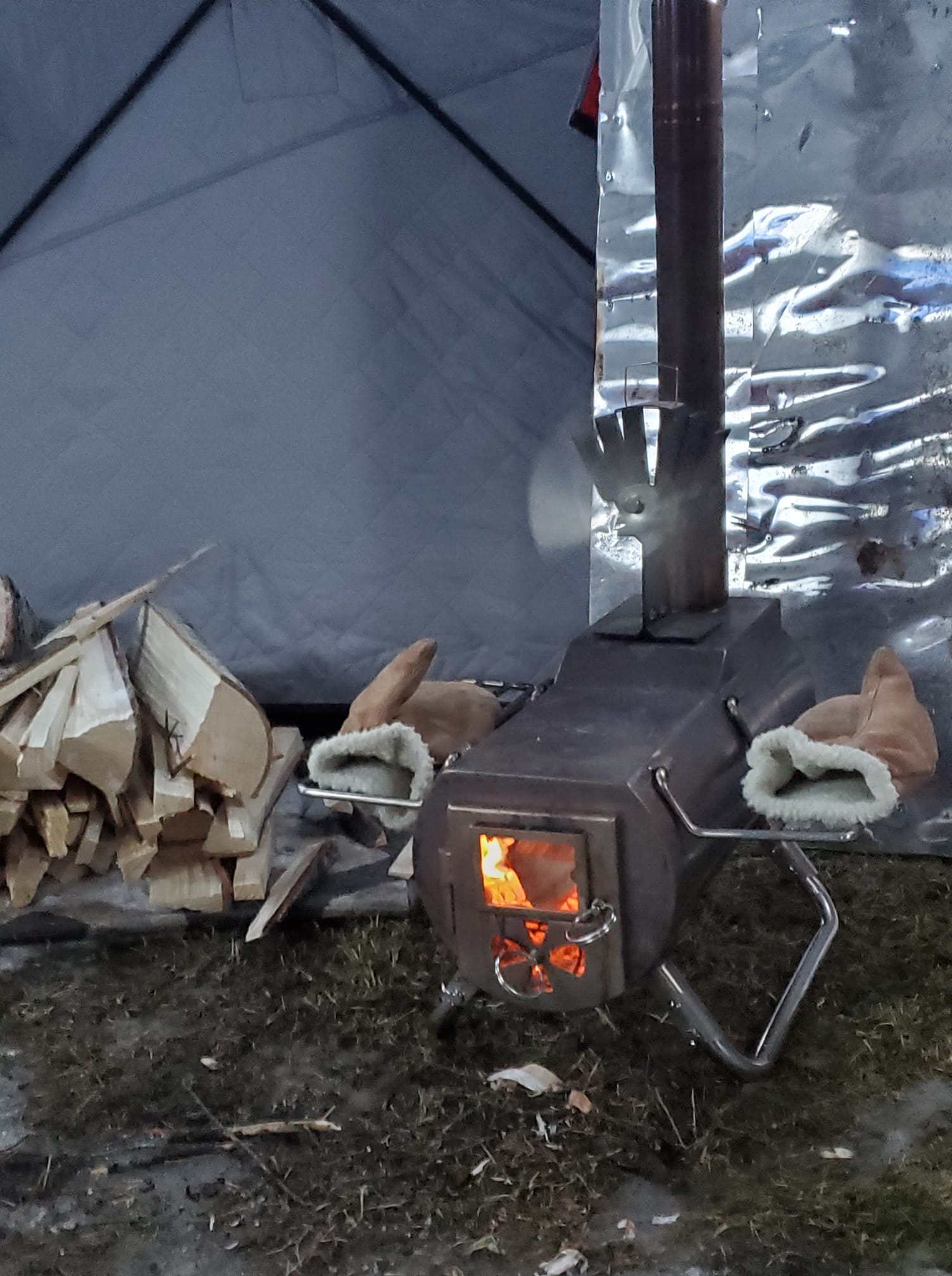 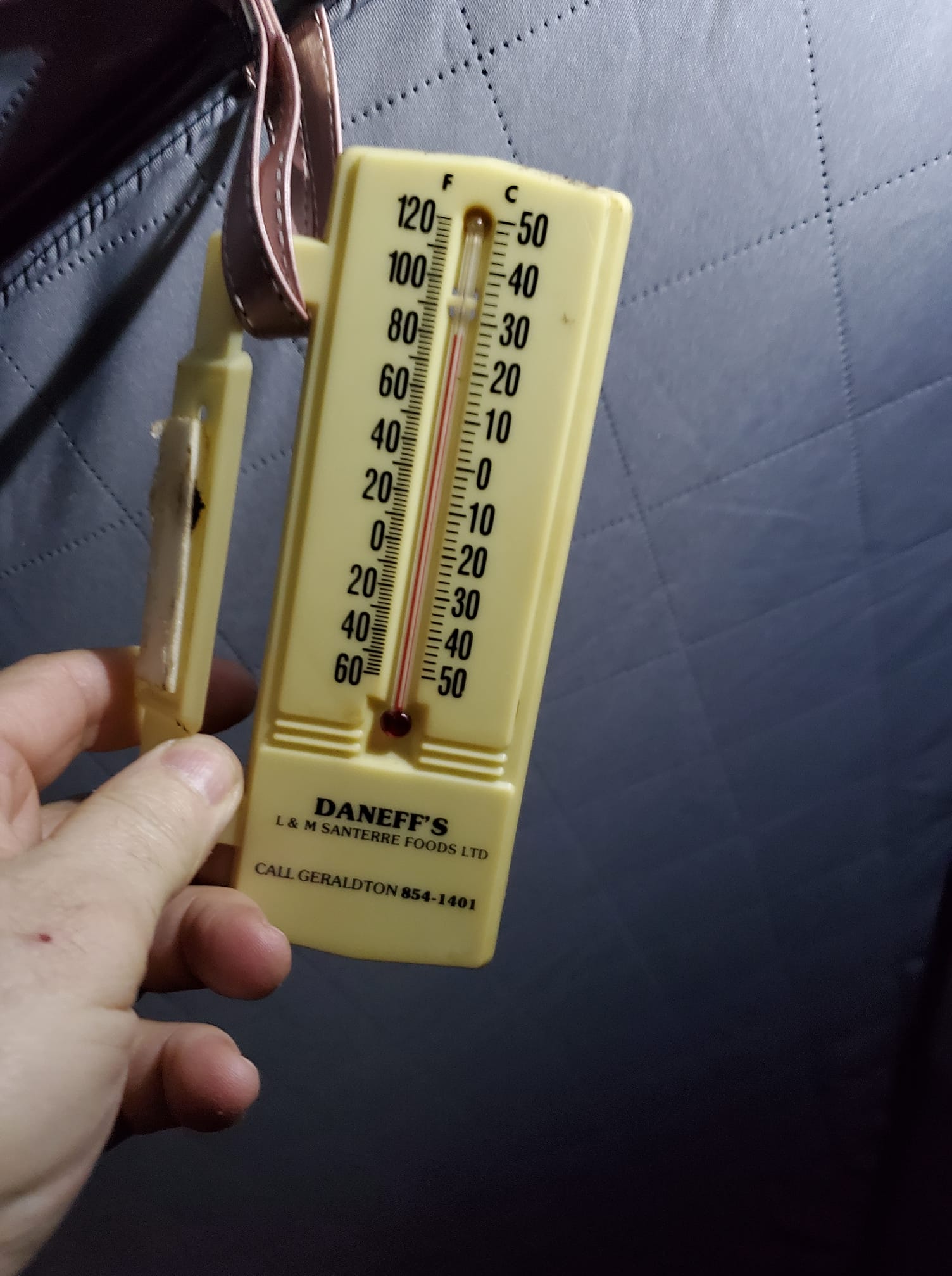 I like the idea of the propane stove, its just hard to chop a new tank full when it runs out.

Bought one last year. Just the small one. Use it in my Eskimo 949 and kept it plenty warm. I took out one of the plastic windows and replaced it with a piece of welding cloth coated in high temp silicone.

I used it during hunting season in my 8x10 canvas tent and heated that up pretty good. Albeit it was only -10C at the coldest. My first wood stove so I have nothing to compare it to. Can’t imagine it would be great at -40 but maybe if the bottom of tent was sealed better with snow would work. Small stove meant steady feeding of small wood.

I opted for the longer legs because I’m fat and old and getting fatter and older so bending down that far was not appealing. I bought the spark arrestor, 2 90 elbows and a 45. I also got the water tank and it boiled water pretty good but if you leave it too long it will dry out and there is nowhere to put it to stay warm.

I love mine. No regrets.

Lost Lakes Backcountry Angling has a stove review on YouTube which includes the G Stove.

Ha ha, that's actually my stove, I bought it from him. I have used all three stoves that he reviews, they all have their place. The GW two holer can be had for around a 100 bucks, and you can shove a lot of wood in it. I heated a 10 x 15 tent with 5 foot sidewalls for three winters with the GW 2 holer. Also nice to be able to remove the covers and put a pot directly on the heat. I never experienced the problems John had with it.

The Kni co is of course pretty much the industry standard for affordable tent heating. They always work.

The G Stove is kind of in a niche market. Works well for smaller tents, looks cool and is fun to play with. I'm going to really play with the draft adjustments this weekend. it will be the first overnighter. i'll give a full report next week, lol.

Ha ha, my apologies, I think I might have posted some picks in the picture of the day thread, but I'll redo them here. I've used it twice for overnighters now, both times the temperature was between -15 an -20 C, so around 5 to -4 F. I built a little box to get the stove up higher for the second trip, prevented some snow melt. 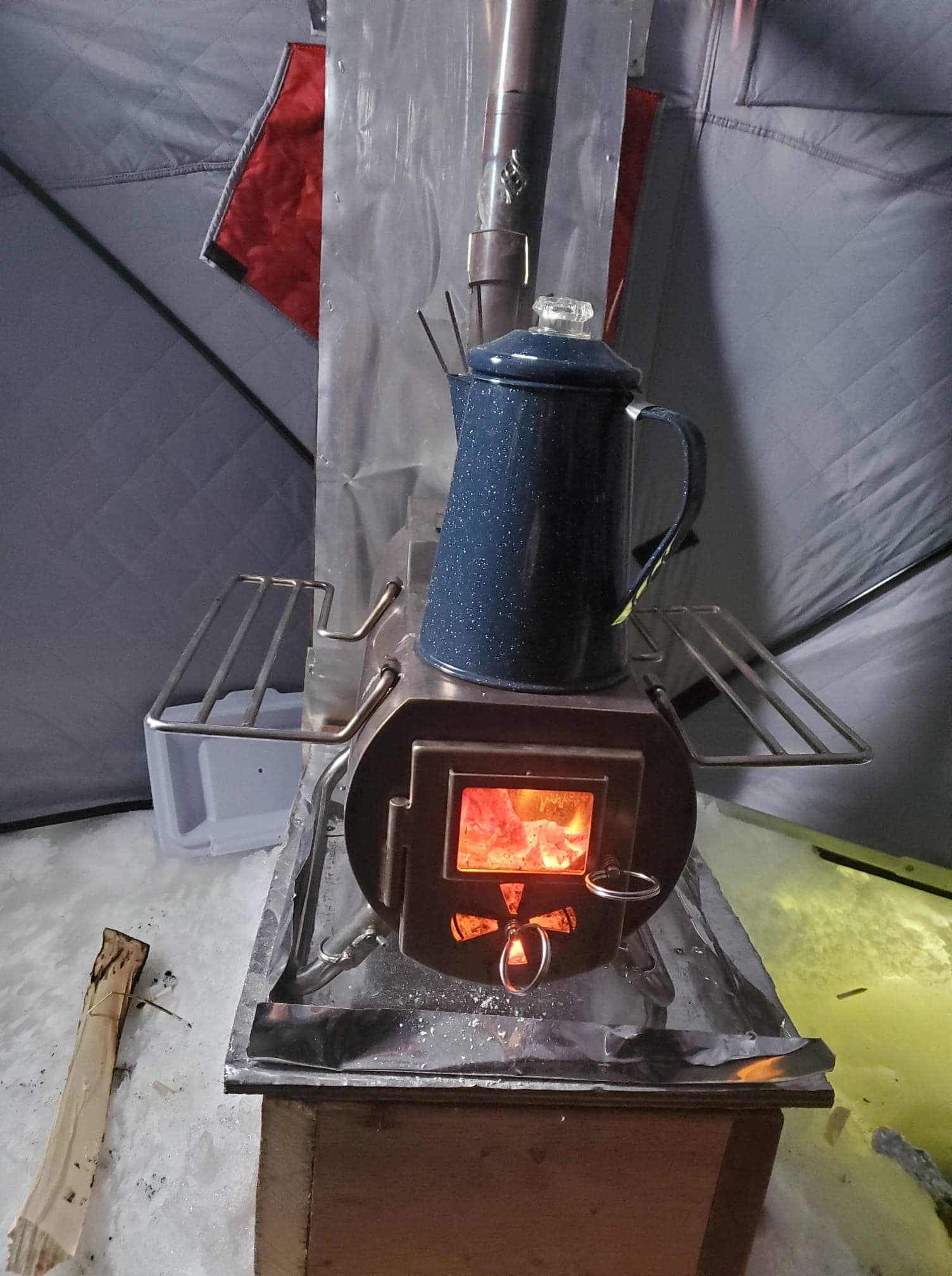 Had to feed it every hour/hour and a half overnight to keep my wife toasty. The first time, I didn't use the in-pipe damper, just the one on the stove. This made for a fairly efficient burn, no creosote build up in the pipes. The next time I used the in-pipe damper and did not like the overall results. It slowed the burn down too much, and lots of creosote in the pipes resulted. As well, the coals never fully combusted, so the stove filled up overnight, it was hard to get more wood in. There is a tool that comes with it to scrape coals out during the burn, next time I am going to do that before the evening, scrape the coals out into a shovel and toss them outside. The glass window is not airtight, I am going to have to fix that or use the other door I have that has no glass.

All in all, I think it is a great little stove, my favourite one at the moment. The stove is robust, stainless steel and a quality build. It will last for a long time. Pretty sure we would be comfortable down to -40 in there with this stove, the insulated ice pop up tents are a thing of beauty, if you are not worried about weight. The stove with all the accessories is not lightweight either, I keep everything in an old hockey bag, probably comes in around 25 pounds or so. 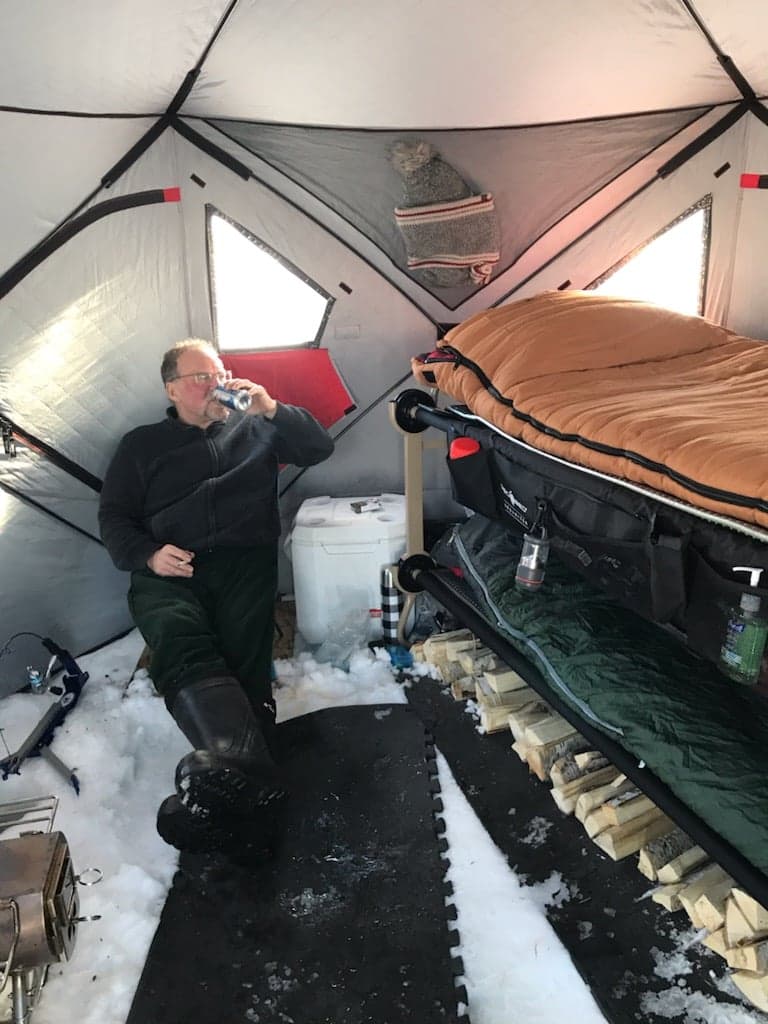 Obviously, we weren't worried about weight. I had my skidoo with two sleighs to get everything out there.

It was about -20 when this pic was taken. 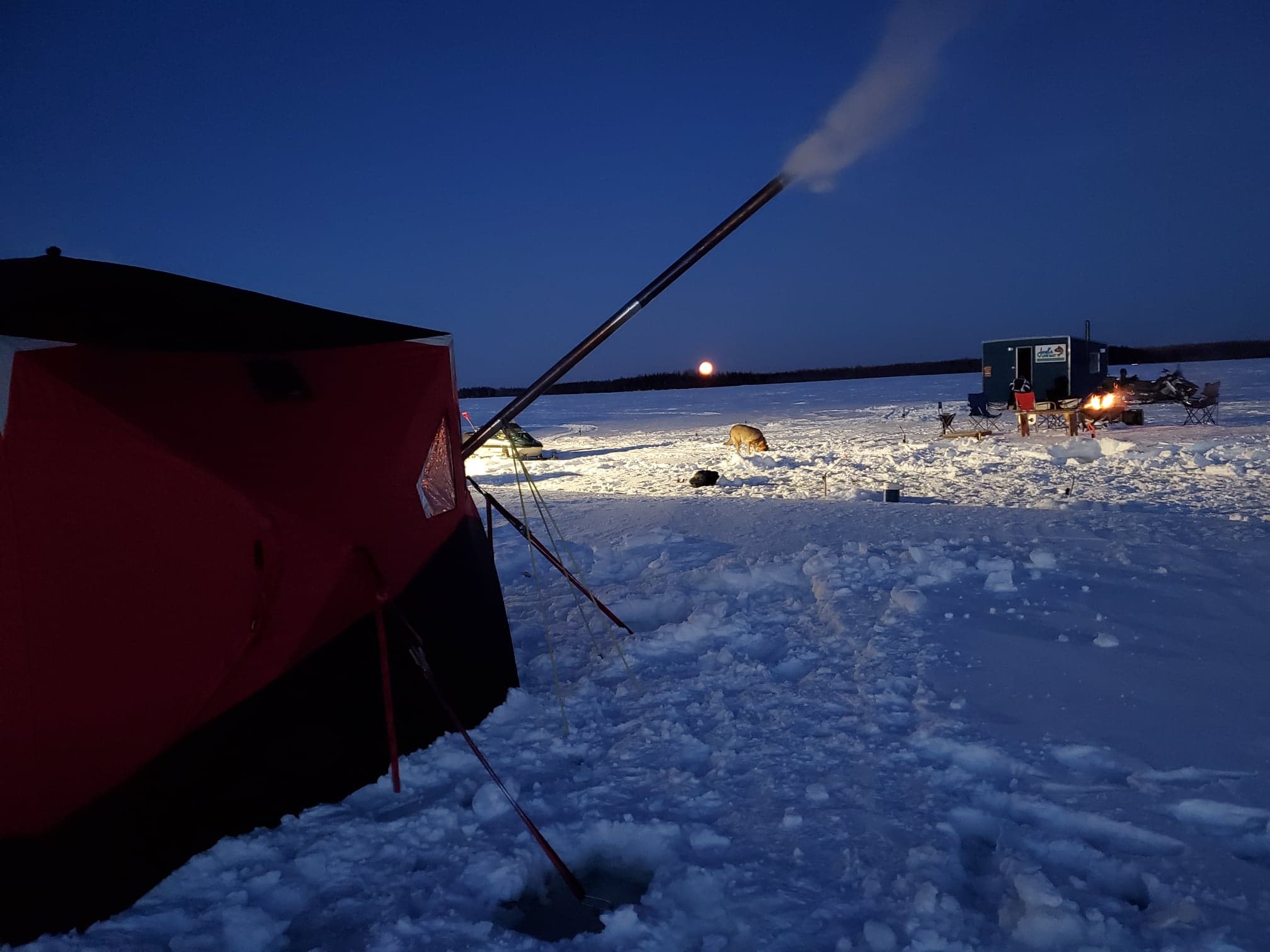 I dried out the tent and put it away a couple of days ago, we still have lots of ice, but the weather is sketchy right now, got 12 inches of snow on Wednesday, after a week of solid melting, so the lakes will probably be slushy. Opening weekend for walleye is the middle of May. It can often get pretty cold then as well. We are planning on going out then, if it is going to be cold, we will take the same set up.

There are other similar stoves out there being offered on amazon, built in China, but for the hundred bucks you might save, I would go with something that is built to last.

Thanks Mem! Based on this, I think I’m in.
You must log in or register to reply here.

B
Mason fire box and other musings

Giving away gear to family or others?
2