Thanks Mike, your feedback is valued. I've heard all about your feet problems. (just kidding) No, the sweaty issue with neoprene is known, but I wasn't sure what I'd do about it. Alternate inside out every other day, swishing and wishing in lake water? The wool sock idea is good. Given my difficulty in finding the perfect fit in shoes (the size changes with every pair?) I'll probably find a pair of neos roomy enough for this layering idea. And I like cheap.
G

Odyssey said:
the sweaty issue with neoprene is known, but I wasn't sure what I'd do about it. Alternate inside out every other day, swishing and wishing in lake water? The wool sock idea is good.
Click to expand...


The amount of sweat moisture in the Mukluks is minimal. When I take the Muks off to change shoes or air out my feet the moisture is between the Sealskinz and the boots, the wool liner socks are largely dry. The Sealskinz (and wool under socks) dry off fast when I hang them on the (two rope twisted) clothesline, although the inside of the Muk boots dries more slowly.

BTW, even if the Mukluks are still damp, or leak a little bit until the stitching wet swells (my old, well worn and oft Aquasealed Nunavuts do) my feet inside the waterproof breathable Sealskinz are still dry.

Neither my Sealskinz nor Mukluks have neoprene bootie stink. I’ll mail you a scratch & sniff card.

That Mukluk, Sealskinz, Smartwool combination is a BMO/Topher trick, and everyone who winter paddles with them/him was quick to adopt it for off season paddling.

From October through April that is my preferred paddling footwear, unless I am somewhere far down south.
A

I was so disgusted with that paddle I could have spit nails. What a piece of shit! Nostalgia talked me into buying a wood paddle for shallow moving water instead of a carbon whitewater paddle. I went with a Bending Branches Expedition Plus. I believe that's the sturdiest paddle they build at 24 ounces. The thing felt like a club compared to my 10oz. carbon paddle. I hadn't been running much whitewater and it had hardly been used it all. Then, ascending a rapid, it wedged between two rocks and must have twisted and cracked the face of the blade. I thought I heard crunching wood fibers but thought I was hearing things since there's no way it should have been damaged by that. It wasn't until a couple days later I noticed the split running up the blade. Thankfully the blade was fiberglassed on both faces and that seemed to keep it from getting worse. The paddle was on light duty for the rest of the trip and I cursed every time I had to carry the worthless thing over a portage.
Click to expand...

A couple pictures of the splitting Bending Branches paddle. 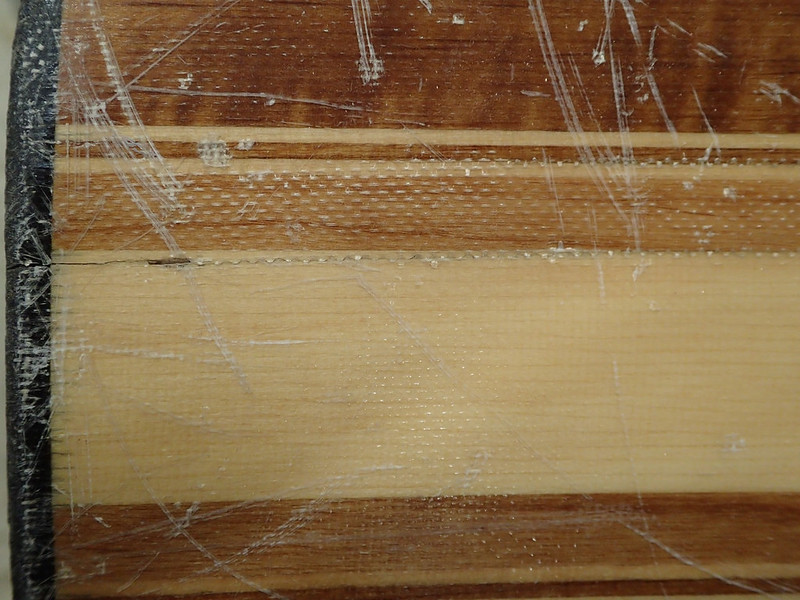 There's a second split that's less obvious but you can tell it's there but the distressed fiberglass. It runs farther up the blade and cuts right through the back of Sadie's head. 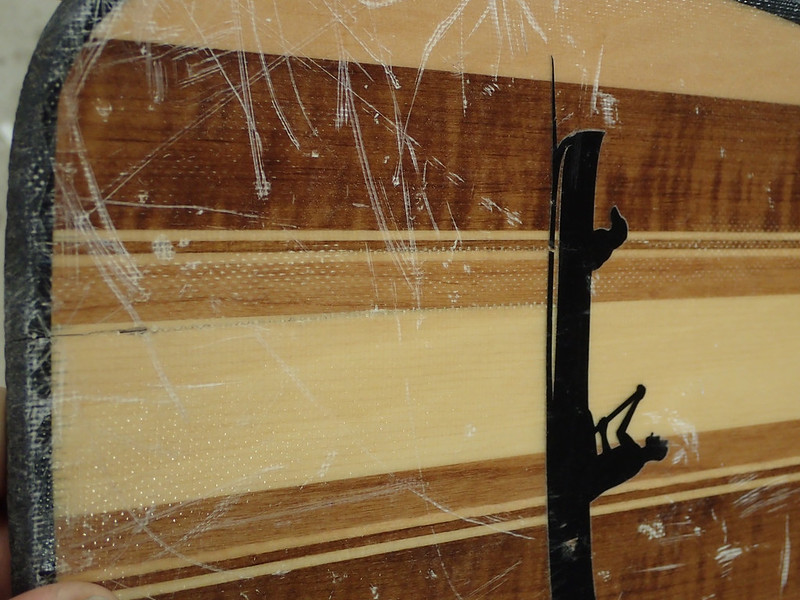 You might consider contacting Bending Branches to see if they will replace the paddle for you. I had a custom length all carbon double blade built for me by them and after 2 years or so had a crack appear in the shaft. They replaced it at no charge other than the cost of shipping the blade back to them. The new one is working just fine.

They value their reputation and keeping it in the small world of single blade paddlers seems to be important to them.

Worth trying - over the past 5 years or so I've been pleasantly surprised with corporate responses to product problems I've had. In every case (about 5 or 6) these companies have replaced the item at no cost.

I would definitely contact them, especially on a newer paddle.

RockGuard delaminated on my BB after 7+ years. They offered me 20% off a new one. I opened up the crack with a Dremel bit and filled it with epoxy. Looks ugly but it worked.
A

I thought about sending the paddle back and I'm sure they would be happy to replace it but I didn't see the point. I have no confidence in the paddle so I'd never use it. I have lighter paddles for my regular day paddles and I'd never bring it along on a trip. Better to keep it in the shop as a reminder to build things myself rather than buy from others when possible.

I split a couple of early BB blades in the same fashion, through the Rock Guard tip and well up the blade. I didn’t think to contact BB and ask about a return authorization replacement or repair, I just forced some epoxy in the crack, clamped the blade tight and later laid a strip of glass tape on both sides.

I probably should have called BB, as both those splits were visibly along poorly selected grain run outs in the lamination. Those two sticks have since been used hard as loaners and beaters and have not re-split.

I think wood blades can be a crap shoot in terms of grain and strength. Not just cracks on visible grain run out on laminated sticks, but even on what looks to be nice straight sound grain.

Such are the mysteries of wood. I have split the blades on other wood paddles, and repair resurrected a dozen freebies that came with a used canoe purchase. A couple of those had fully separated or hanging-by-a-thread blades with the missing slice recovered and glued/glassed back in place.

One was very nice WW paddle, missing 3 inch wide section of blade edge. I eventually acquired an un-repairable paddle of near identical blade size and shape, which became an organ donor. I inserted thin SS rods between the pieces, epoxied/clamped on the donor section and glass taped the blades. Ten years later that paddle is still going strong in the hand of someone far more abusive than me, who paddles with it every week. Sometimes a repair is stronger than the original.

Five or six years ago BB did replace a paddle that was destroyed by my own actions. Or at least someone else’s actions.

I detest paddles left on the ground where someone might step on them. In camp I put my paddles in my canoe to keep the out from underfoot. A paddling friend, walking backwards in the dark near camp, tripped and fell into my canoe. Alcohol may have been involved.

Despite weighing a buck and a half soaking wet he managed to snap a laminated BB shaft in half. Awful raggedjagged split, un-repairable without making a paddle that was 8 inches too short.

I e-mailed BB that story and they gave me an RA number, which in itself was above and beyond the call of normal customer service. I did have to mail them the shattered parts, but they sent me a new replacement paddle.
You must log in or register to reply here.