I have not been out even once this year with all the fire closures and excess heat. Along comes Charles Burchill with a Sunday morning poling clinic. I thought, what the hell. It looks interesting and I have wanted to meet Charles for a while now.

So I have now been corrupted to the use of poles for canoeing. My boat is a bit too round and tips pretty easy...as I discovered today...but as long as I kept upright it was pretty cool. It wiill take some time and a different boat to learn it welll but I can see me using this. It is a reallllllly efficient way to move against a heavy current. And good lord,I even managed to pole up a rapid. No shit. I swam a good bit too but that is all part of learning.

I have so many questions now. And I will have to make some poles. This is really trippy...I have a whole new passion. For day trips you can book right along a lot faster with way less effort than paddling. I still like paddling, especially at night or when fishing. This however opens up new possibilities for me ....I can day trip up stream with a pole and come back with my paddle. No more shuttles needed.

Now, to be clear, it was a two hour clinic and there were things I couldnt do. Mostly because I got tired. I am thinking my 16 ft Langford with the wide flat bottom would be good for this. So would the Morris.
Sadly I have no pictures as my camera got wet.

Congrats! I built a "Home Depole" (closet rod from the box store with hanger bolts in the ends) last fall because I wasn't convinced poling was going to be my cup of tea. I finally gave it a whirl in some very, very shallow flat water. What a revelation! You couldn't paddle this stuff worth a damn but it was great to pole around in! Looking forward to trying both going up and down (snubbing) some rapids but right now the water around me is all way too high.

Yes, I was really surprised how usefull poling is. If you can stay upright...lol.

You are also going to like the view from up there. I've been standing to paddle for years and am now looking to get into poling too. The bigger the boat the better, my 16' OT Yankee is fine but the 18' guide is much more stable and relaxing. Good luck and have fun.

Iskweo said:
This however opens up new possibilities for me ....I can day trip up stream with a pole and come back with my paddle. No more shuttles needed.
Click to expand...

I've been poling for about 25 years and have found it a great way to travel by canoe. I also love the fact that I don't need a shuttle and it is a great workout! Did you get the rubberband legs? That's how my legs feel when I've poled up some narly rapids! Congrats!

Iskweo said:
...My boat is a bit too round and tips pretty easy...as I discovered today...but as long as I kept upright it was pretty cool....
Christine
Click to expand...

What boat were you using, Christine?

Congrats on expanding your canoe skills!

Nope...my legs were fine...I work out regularly so even at my age I can still manage.

I was using my Bear Mountain Cottage Cruiser cedarstrip...a modified prospector. Charles was using a Bluewater prospector with a foam core bottom...it was flatter than mine. More stable. He says he still falls in on occasion. The Bruiser as I call it, has a more rounded bottom and would be better with some ballast in it.

Apparently the guy who taught our instructor likes big boats too. 18 feet minimum. We do have that penobscott 17 footer...it might be a good choice? Or build the 17 Morris stripper.

I haven't tried poling yet as the majority of my water time is on deeper lakes but I do like to stand in the canoe for a better view as stated above.

The lines of the Cottage Cruiser appear - on screen, at least - to be closer to my NC Prospector than the Penobscot, which is a bit narrower and rounder. Yeah - put some ballast securely on the floor in the middle to calm it down. I bet you get comfortable with it soon.

I usually ballast it out when daytriping and it was not super bad, just twitchy. I like my Bruiser.


When I say Penobscott, I mean an original Pecaco....Penobscott canoe company ...wood canvas circa 1920. A treasure that Robin brought us a few years back. It weighs a bit but would be ideal for this sort of thing.

Iskweo said:
I usually ballast it out when daytriping and it was not super bad, just twitchy. I like my Bruiser.


When I say Penobscott, I mean an original Pecaco....Penobscott canoe company ...wood canvas circa 1920. A treasure that Robin brought us a few years back. It weighs a bit but would be ideal for this sort of thing.

Ah, thanks for the clarification. Pardon my ignorance. I happen to like the OT Penobscot for poling, when things won't get too rough.
G

Steve in Idaho said:
I happen to like the OT Penobscot for poling, when things won't get too rough.
Click to expand...

I am not a poler, but the OT Penobscot 16 is my favorite all-around soloized tripping canoe. The only thing I would change in the Penobscot design or dimensions is the Royalex weight.

A Penobscot tripping friend feels much the same way, and will probably be ordering a Swift Keewaydin, factory soloized with a center seat and foot brace at his desired locations.

I want one too. Hell, I deserve a sub-40 lb big boy tripping canoe, and the Kee 16 dimensions are damned close to the Penobscot 16, just 20 lbs lighter.

I do not want or need a 3-seater combi Kee 16, but if Swift can accommodate his (much like mine) desired solo seat placement and foot brace changes I may be all in after a test paddle in his customized canoe.

I'll be learning right along with you Christine, I just ordered a pole from Don Merchant at Pole and Paddle to be shipped to Pa. where I had been unable to find a good pole. At 60 years old I hope an old dog can learn a new trick.

The gents that taught Charles are real fans of the Esquif Prospector 17ft. (Prospecteur). They feel that they almost move up river by themselves. Their tradition of poling derives from the New Brunswick lumbering heritage where big canoes pushed upstream to supply the camps and then every size of boat was snubbed down stream with the booms at breakup. The other tradition is the salmon fishing guides for sportsmen on the Miramichi River. Great long canoes where the client sat happily in the center and the guide(s) pushed them up stream to the best spots. The longer the better. I find the best way to get better is to practice straight line and refine that technique both forwards and backwards. Then just attempt anything you can do with a paddle including style manoeuvres. If you are jazzed after two hours, imagine after half a dozen outings. Oh, and Lowangle al ... I am 60 this year and it is mostly what I do now so no problem. Lets bring back that pole!
Last edited: Sep 2, 2018

Congrats! You're right about poling opening up so many new opportunities. Spent part of the summer casually poling into marshy wetland areas for wildlife viewing. You really do get a neat perspective standing up. I could see swarms of little panfish scooting around and saw some large-mouth bass in the shallows. Would've never seen them kneeling low in the boat.

Making a wood canoe pole should be easy peazy for you guys. I made a one piece years ago and posted here in the forum. Since then also finished a making a two piece wooden pole last summer after being inspired by RavenJester's instructions. Nice option if you want to save a bit of space.

Ended up going a bit more high tech on the second one and ordered a carbon fibre ferrule meant for the thicker loom of Greenland style kayak paddles. Spent some time in the lumber pile at home depot but eventually found two board with very straight grain lines along one side and knot-free. Ripped two 1.5" strips with a circular saw and then worked the pieces round with a crooked knife. A block plane or other power tools should work too (probably even better). 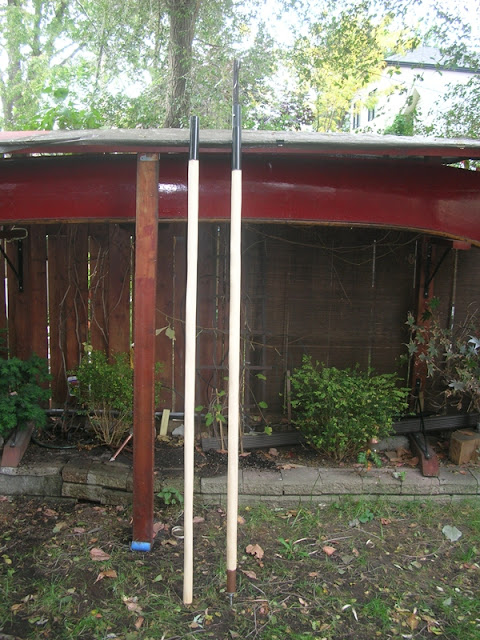 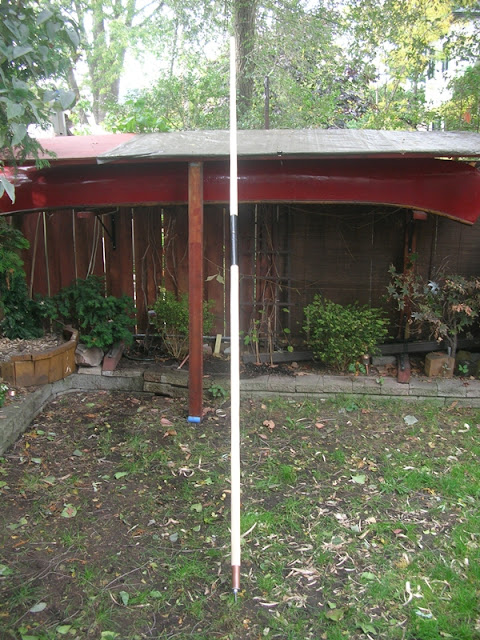 The connection is pretty solid but messed up a bit of the calculations so that one piece is a few inches taller than the other. I had forgotten to factor in the lag bolt at the foot. For the shoe I salvaged a piece of copper pipe I found in a box a scrap metal left out by a neighbour on garbage day. A large washer, lag screw and some bolts and the homemade foot is good to go. 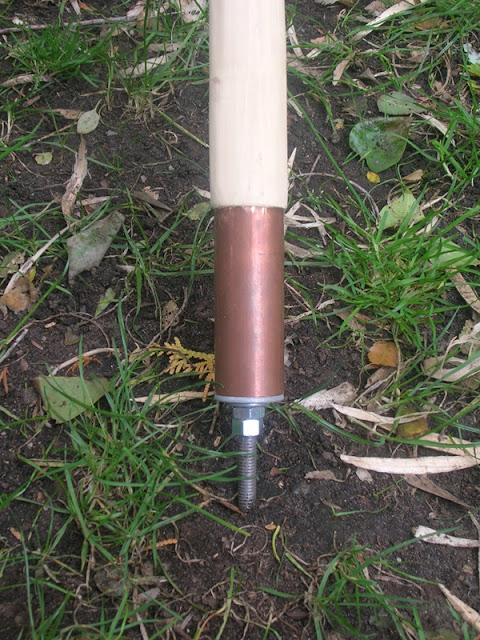 Apart from being easier to transport in the car and in the boat, the advantage is that you have 2 six foot poles to set up a tarp or something in camp too.

One time on Eagle Lake in the Allagash I had just made camp when another solo canoeist tentatively approached. He had not one but two setting poles -- a regular one at 12' or so and a shorty, maybe 7 or 8'. He'd come in via Indian Stream and was concerned that the low branches on that small stream would prevent the use of the full length pole, hence the shorty. I of course invited him to share the site, it was late afternoon and anyway how often do you get a visitor with two setting poles?

If I was blessed with the opportunity to visit you camp, Goonstroke, I would also have two poles. That's a habit I've had for several years, since it's not unusual to get one pole stuck, and I need the other to get back up and retrieve it.

Steve in Idaho said:
If I was blessed with the opportunity to visit you camp, Goonstroke, I would also have two poles. That's a habit I've had for several years, since it's not unusual to get one pole stuck, and I need the other to get back up and retrieve it.
Click to expand...

That makes sense, same as having a spare paddle close at hand in challenging water. I don't pole very often or very well, and I only have one (a Home Depole).

By all means visit my camp! If possible, bring stories and something to drink. The fellow on Eagle Lake had some red wine.
You must log in or register to reply here.

CNY — yup another one