Haven't had many paddling opportunities while being stuck in the city during Covid. Took advantage of the Canadian Thanksgiving holiday to get in an early day trip to the Toronto Islands. Not an epic backwoods trip by any means but still rewarding. Got on the water about 1/2 hour after sunrise to an empty Cherry Beach. 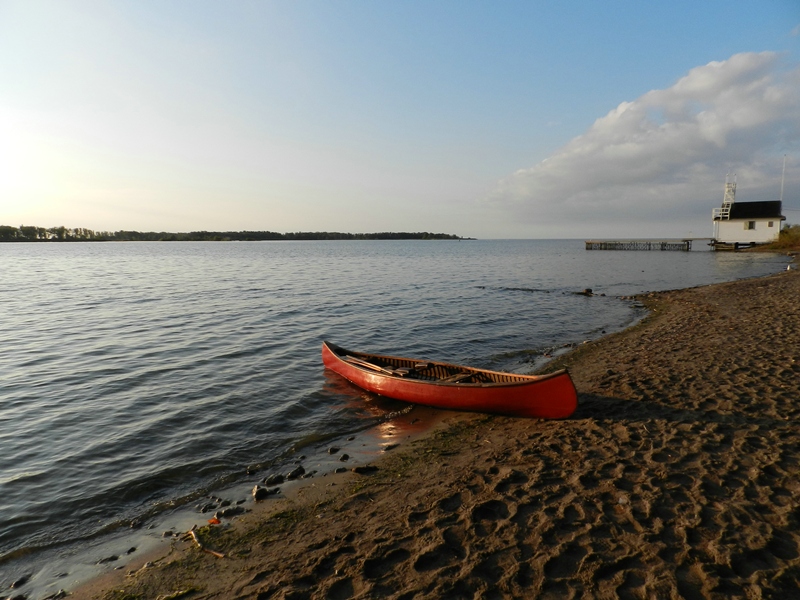 Trees have started changing but the colours are still in the early phase of their transition. This shot of the Eastern Gap to the harbour showcases the lush greenery of the islands in contrast to the industrial section of the Portlands. My leisurely paddle in the early morning was rewarded with an sighting of a mink resting amongst the boulders of the islands' northern breakwall. His coat was brown and grey and the clever fellow even sported some moss as a bit of camouflage on his back. 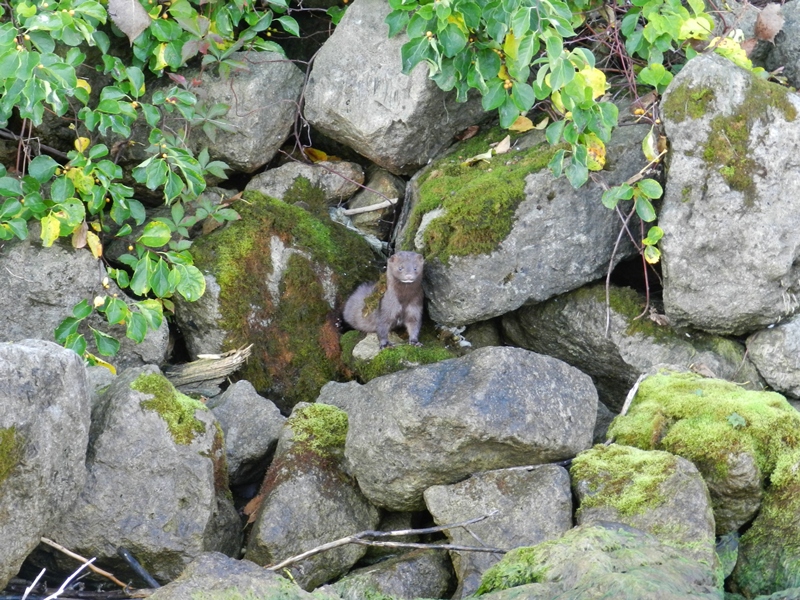 A little further on, I spotted the head of a beaver swimming close to shore. 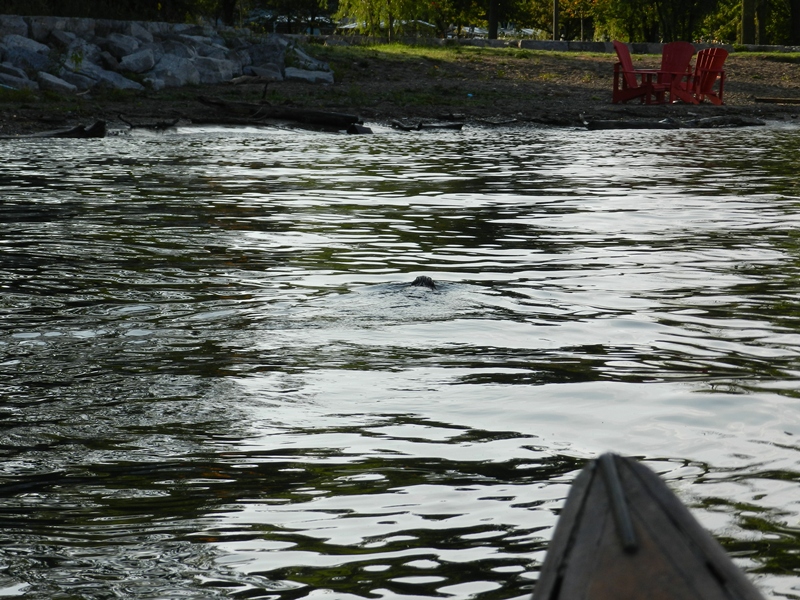 The calm waters of the inner canals were quite peaceful this early in the morning. 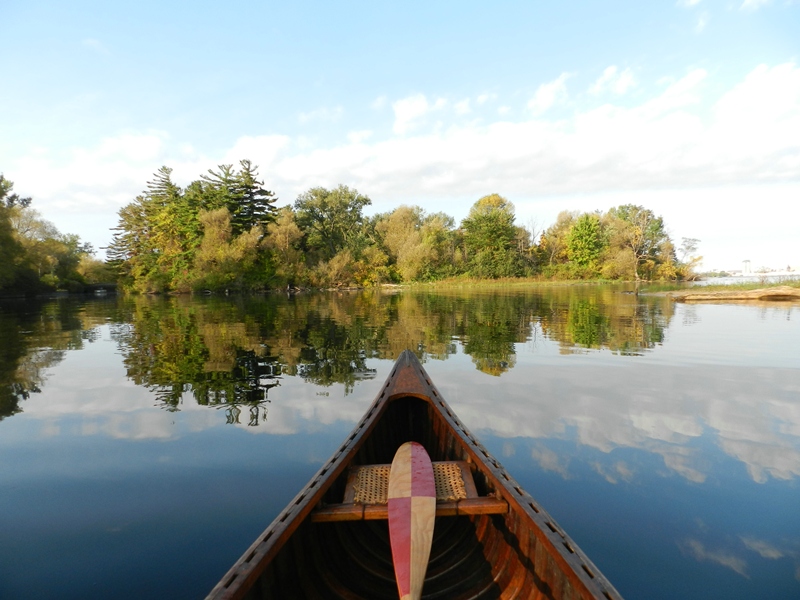 Here's a photo from the 'Sunfish Cut', a very much photographed viewpoint of the city skyline. 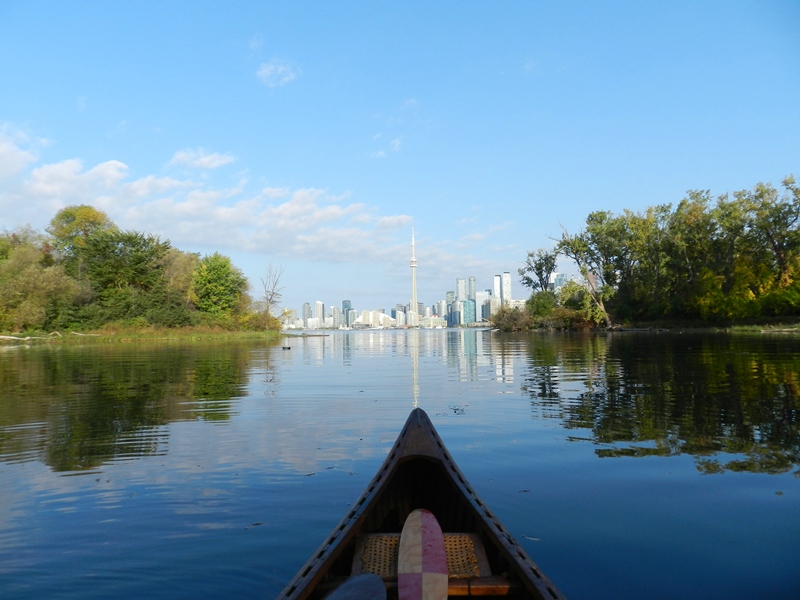 Just to the left of this shot I came across the first of many (seven) different Great Blue Heron sightings. This one was actively hunting and focused only on its prey completed unconcerned with the human in the red canoe 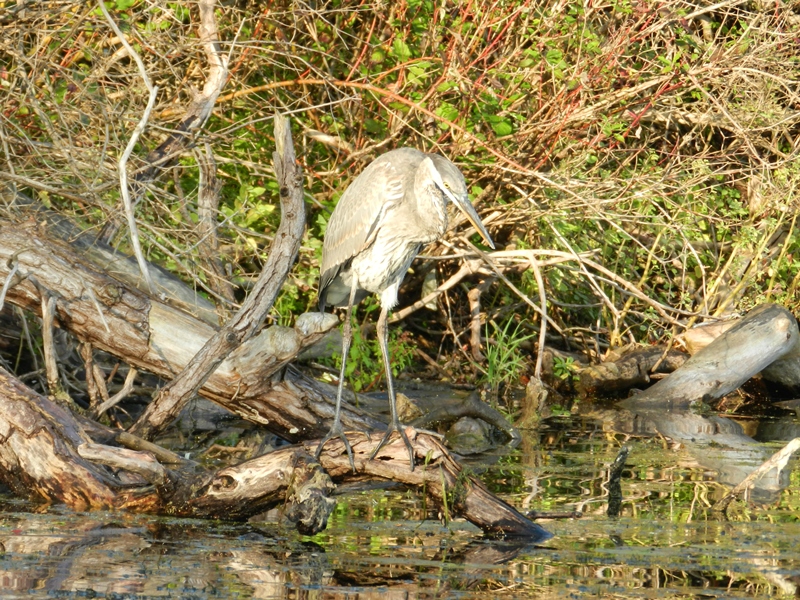 There are few favourite spots that have been left in a naturalised condition instead of being maintained as manicured parkland by the city authorities. These areas are usually loaded with lots of dead fall and weeds and don't see much traffic. I make it point to go through them and often just wait for other bird sightings. Here's a shot of immature, Black-Crowned night Heron hiding along the shoreline. 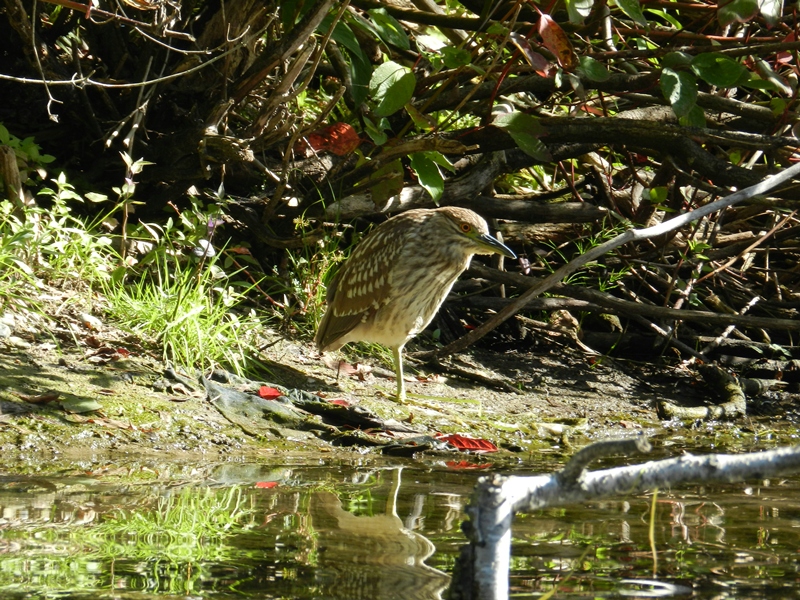 Also spotted a smaller, but mature Green Heron perched atop some driftwood spying for minnows below. 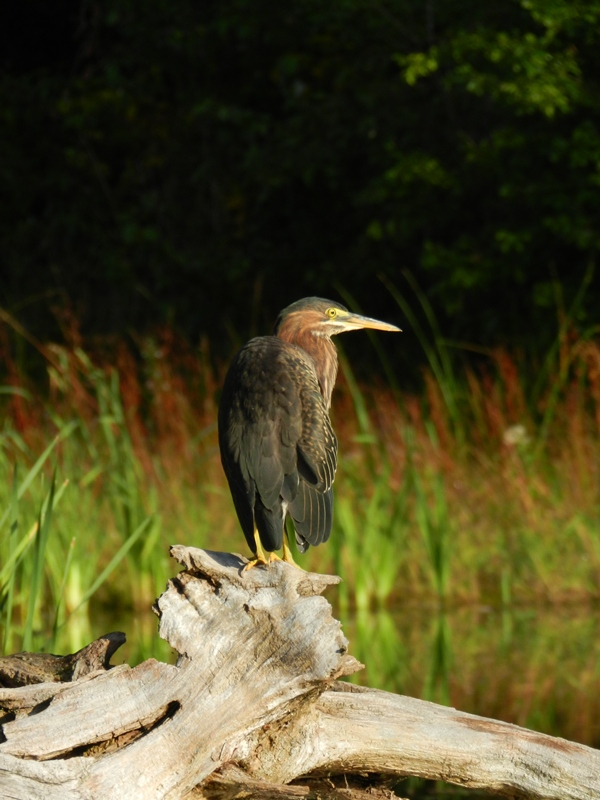 Suddenly, I heard a prehistoric sounding loud croak above me and spotted another Great Blue Heron atop a tree. 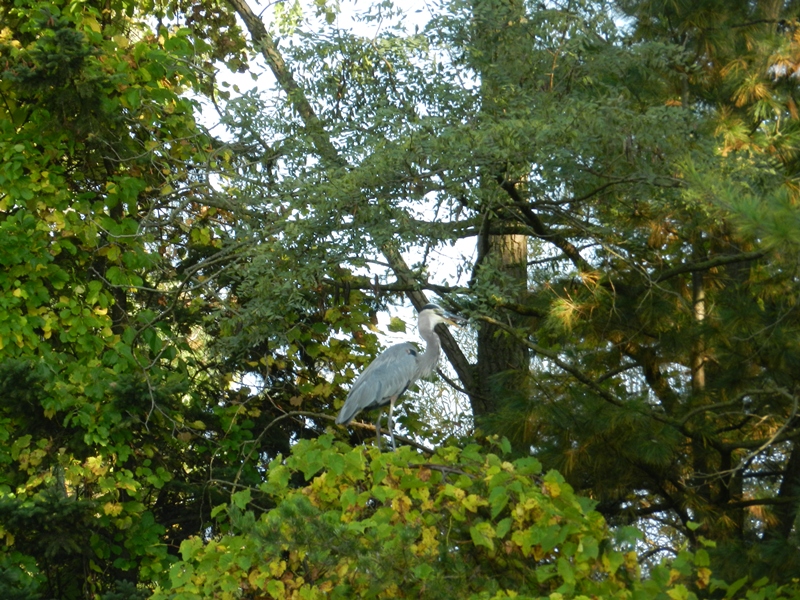 Navigating around the many fallen logs and debris of the channel, it became quickly apparent that this was spot was also Turtle heaven. Many different sizes and types were out of the water warming up in the morning sun. 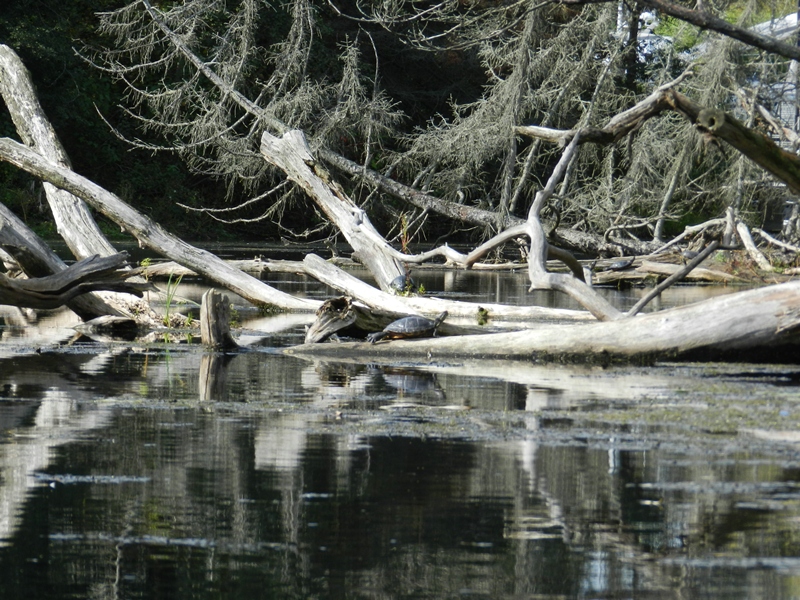 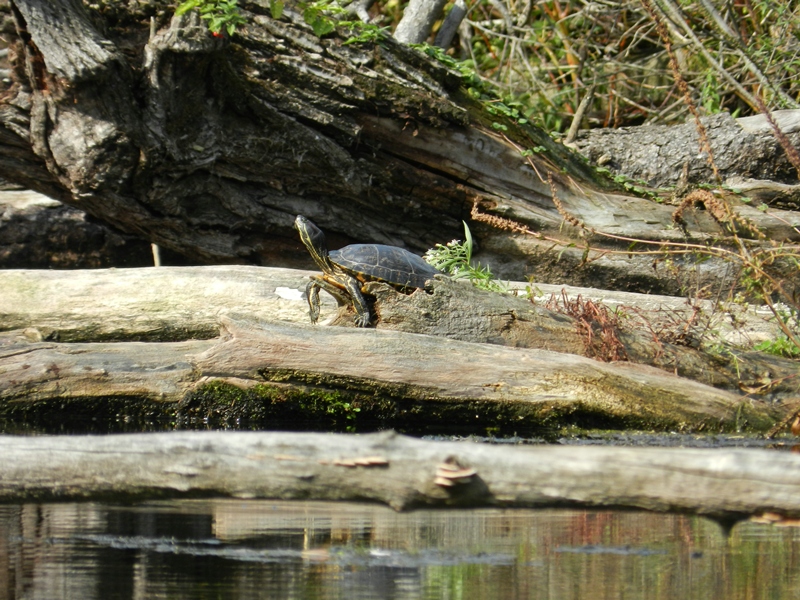 Numerous blue jays began squawking loudly and were harassing a Red-Tailed Hawk in the vicinity. The Hawk found relief by perching on dead tree. Could't get the best shot here. 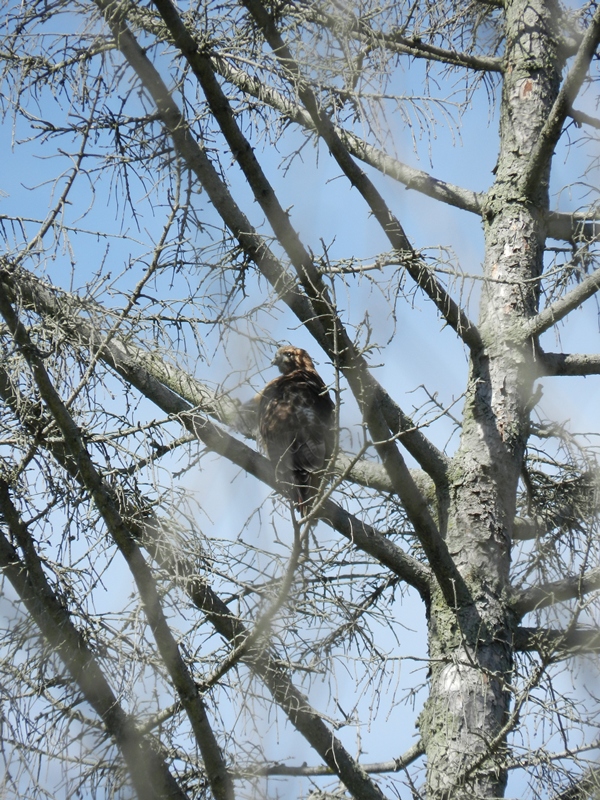 Moving on to interior of the islands close to the shuttered amusement park, these trees caught my eye. The creeping vines wrapped around the trunks have turned into a brilliant scarlet colour while the leaves on the trees were a bright yellow. The combination made them seem like they were right out of a fantasy movie. 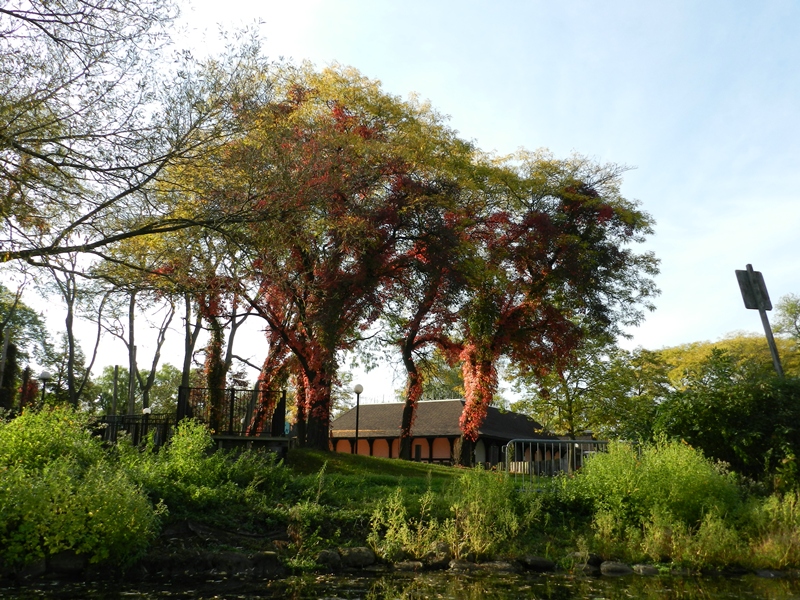 Headed over to another marshy lagoon off the beaten track where I captured a shot of Great Egret hunting next to another Great Blue Heron. Think these these two birds compete for the same food supply and habitat but there seemed to be no animosity between them. Having them positioned so close allowed for a wonderful chance to compare their sizes, with the Great Blue noticeable larger. 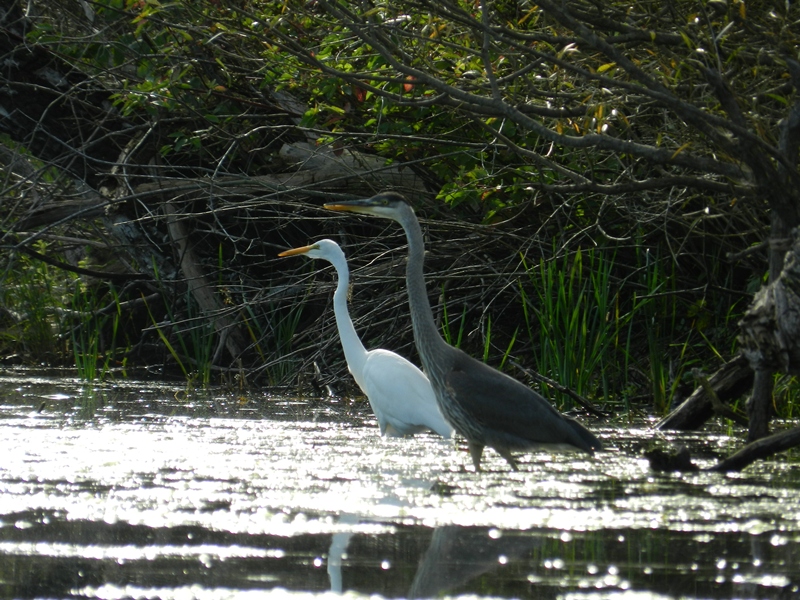 The white plumage makes the Great Egret stand out against the shoreline. A second one was at the other end of the Marsh and while lining up the photo, I noticed yet another Blue Heron peaking out behind some shrubbery to the right. 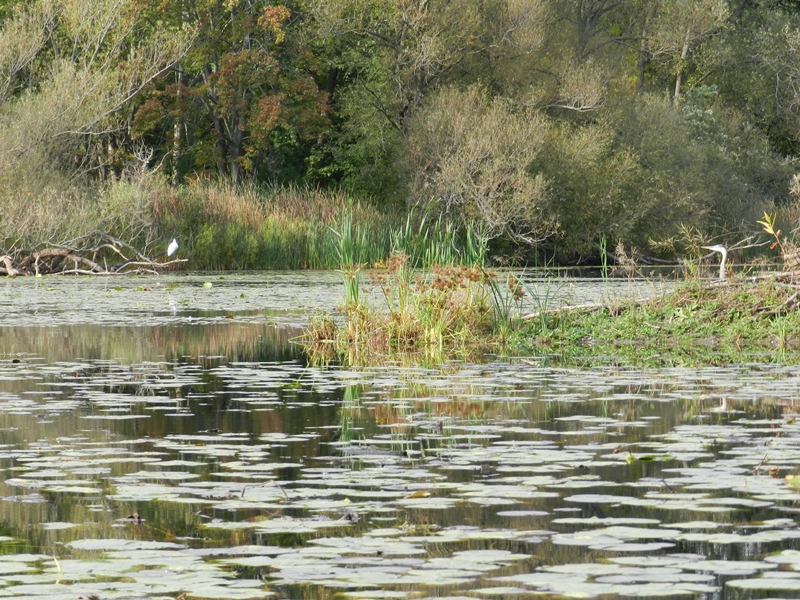 Paddling a bit more in the weed choked lagoon, I spotted another Great Blue that blended in nearly perfectly with the greyish dead fall along the shore. This one remained perfectly still while I paddle by. 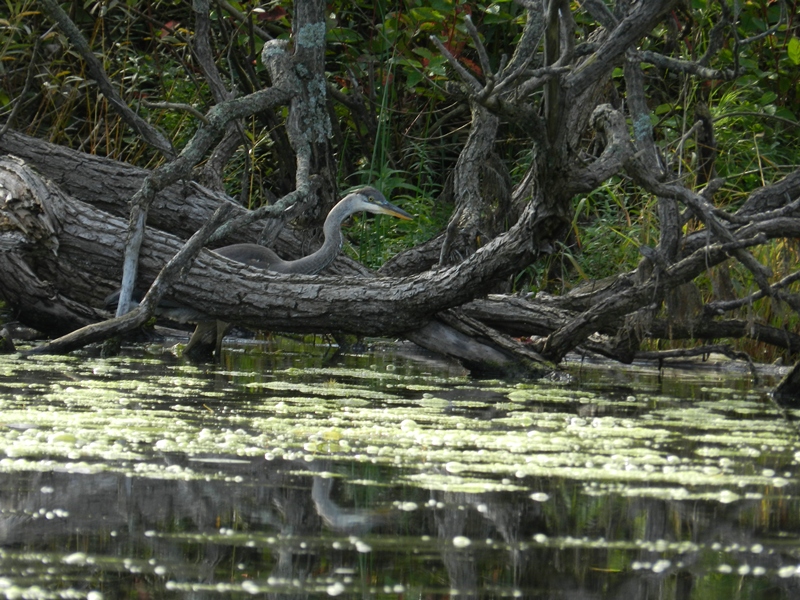 Above me I heard some more trill-like shrieks and noticed another raptor perched on a dead tree branch. Noticeable smaller than the Red-Tailed Hawk from earlier, this one had the marking of Peregrine Falcon. 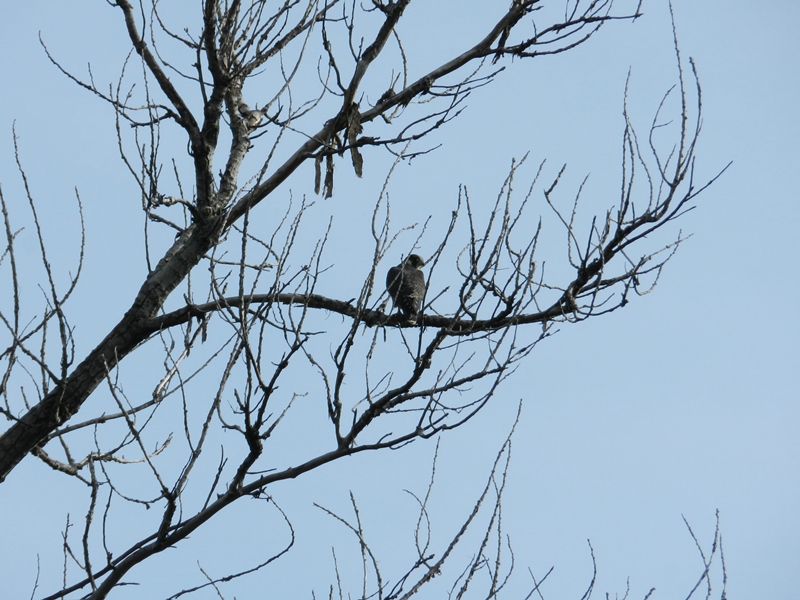 As I paddled closer to try and get a better photo, it took off but in its place, another hoarse croak spooked me. Seems like I got too close to another,very perturbed looking Heron. 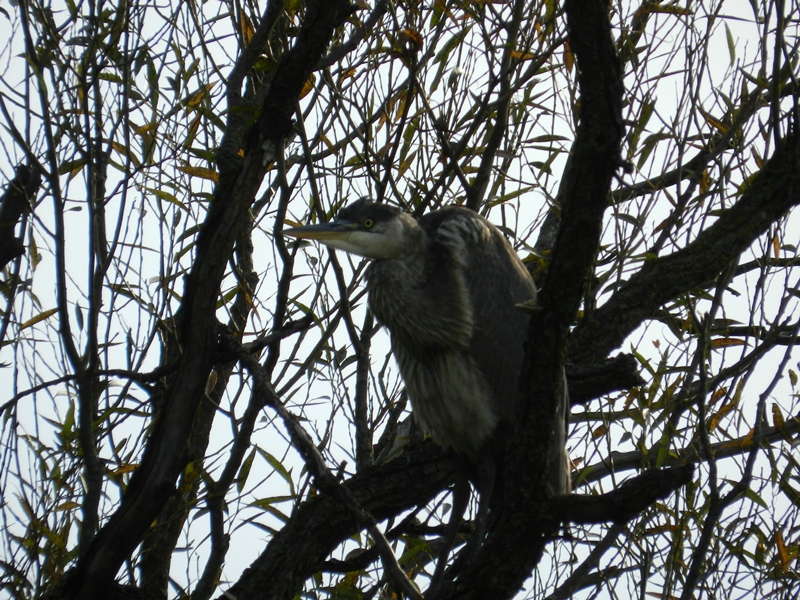 I got the message and paddled off to a final favourite spot, a tiny little pond reached through a shallow stream. Water levels are low here usually requiring getting out a dragging for a bit. No big deal. The reward was a third sighting of another Great Egret. 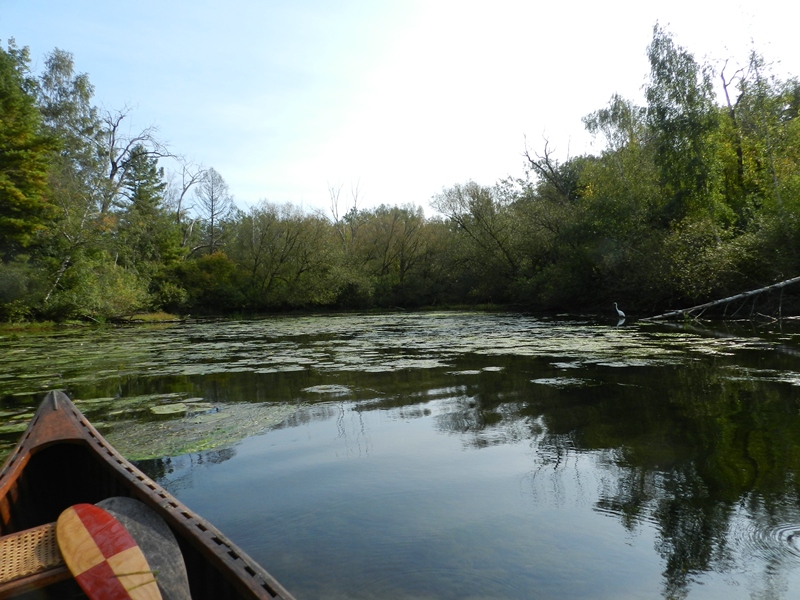 By this time it was nearing 1pm and the crowds of leisure seeking city dwellers had come to the islands. A slew of motorboats, jet skis and loud human voices pretty much ended any chance of not disturbing any more of the wildlife so turned around and headed back. It definitely pays to get paddle this area as early as possible. Still to be about a mile or so offshore from Canada's largest urban centre, the Toronto Islands offers some pretty wonderful wildlife viewing opportunities.

Great report and photography, Murat. Thank you. It's nice to be able to find pockets of wilderness even near populated areas.

Same birds I see here in coastal S Carolina. Interesting. Nice report, enjoyed it. Short “trips” are oft times as enjoyable as longer ones.
Love the paddle design too!

That was a great day out there to get so many great pictures. Daytrips can be very rewarding.

Nice and so close to home. Weather next week in Algonquin looks to have opened up for Mon thru Thurs, so I am heading up that way

I really enjoyed your write up, and the awesome pictures. How marvelous that so near a major metropolitan area wilderness can still be found … and enjoyed in a sweet paddling wood canvas canoe! Morning coffee and a report like this is a great way to start my day.

Nice post! Thanks for naming them. There are a couple I don't see out here.

Loved the heron assortment. They are migrating now and very hungry in prep for the journey.. It was astonishing to learn that here they not only fish but hunt in fields for mice and chipmunks.

yellowcanoe said:
Loved the heron assortment. They are migrating now and very hungry in prep for the journey.. It was astonishing to learn that here they not only fish but hunt in fields for mice and chipmunks.
Click to expand...

My neighbor saw one hunting grey squirrels in his yard. I've been surprised to see them catching fish maybe 13 to 15 inches long.
You must log in or register to reply here.