Carrying a gun when canoe traveling just because

Anyone ever carried a gun in a canoe? Or in your vehicle to and from canoe trips? Not for hunting or for bears. Just because. Mostly, I suppose, for safety, comfort, habit, or general peace of mind.

What kind of gun did/do you carry?

I never have. But I used to paddle with a guy in California named Phil 40 years ago who packed something that looked like Steve McQueen's "Mare's Leg" gun in his TV series Wanted: Dead or Alive (1958-61). 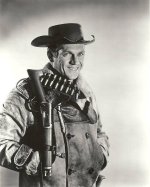 When I visited my boyhood friend Jim in Alaska in 2013, he carried a revolver almost everywhere, including when we went canoeing.

I felt very safe when traveling and canoeing with Phil and Jim, even though I've never been a gun guy myself. I suppose I mostly felt safe from perhaps my greatest overall canoe travel/tripping/van sleeping fear: homo sapiens sapiens.

As a foreigner in the USA / Canada, I never think of taking a gun with me on my wilderness trips.
I don't take a gun with me when I travel where I live.

(I don't want to start a discussion about guns versus bear spray!) I carry bear spray in the bush.

I share the fear of homo sapiens sapiens ... Despite that fact I feel pretty safe on wilderness trips!

I don’t own a handgun, but carrying one across state lines (especially New England) never-mind borders can be a hassle with reciprocity. Getting licensed in multiple states sounds arduous and expensive.

I am a concealed handgun carry permittee in North Carolina. The neighboring states all recognize that permit. I usually carry an handgun (some flavor of a .40 S&W or .45 ACP SIG) when out and about for any reason.

Aside from hunting trips I occasionally carry a firearm while paddling. First time was in 1988; I was doing a Rio Grande trip and a week before someone firing from the Mexican side had shot and wounded a raft guide and client and killed another client. At the time it was not the first such incident there.

Despite the fact that I’d be lucky to hit the broad side of a barn at any distance with a pistol I thought I’d at least like to be able to shoot back.

I semi-routinely carry a 12G shotgun in the tripping truck, especially on long trips where I may be freestyle camping along the way in primitive BLM lands, National Forests, along the Mexico border or in meth lab country.

Oddly enough the place that convinced me to always bring the shotgun was camping in a deserted State Park in Kansas during an April trip to Utah. Long weird story; a carload of townie kids drove past our site, stopped 50 yards away and ran up into a small canyon, emerging minutes later carrying some things gleefully shouting “It’s all still there, it’s all still there”

They departed and a half hour later a different carload of kids arrived, including one riding in the lid-closed trunk. They scurried into the canyon and trunk-boy emerged now toting an assault rifle. That same car, with a buzzy “glass-pack” muffler, returned in the wee hours of the night.

When I was temporarily living in a remote area of SE Arizona I carried a S&W .38 revolver. Everyone thereabout wore a sidearm; they strapped on a pistol in the morning the way most folks remember to put on underwear, so I did not appear out of the ordinary.

I did not much care for it, the revolver was big, heavy, clunky at my hip and caught on things. Maybe if it had been a slender 9mm semi-automatic, but I’ve never much liked semi-autos.

I only carry for hunting purposes now, or if my wife makes me. I can't imagine ever needing to use it for protection against humans, we never see any where we go, and the bears are still rightfully afraid and usually easily dispersed with a curse word.
A

I guess I'm happy playing the odds. I suppose it's possible I could be attacked by a renegade bear or human but the odds don't worry me.

I was asked once by a local if I carried when I walked in the woods behind my house because of a long history of Catamounts in the area.
I reply that I did not
A while later I took a 9mm with me. It just didn't feel right the whole hike and I never took it again, even after some months later I found myself staring into the eyes of a huge wolf.

We never canoe or backcountry travel without a firearm here in Alaska or Yukon Territory and it's always a short 12ga with Brenneke slugs.

I would not take grizzlies lightly nor unprepared.

Six of us were sitting around the campfire on a miserable day last August when a large boar grizzly walked right into our camp with 30 feet of us. My shotgun was in my tent about 50 feet away. when we all made a ruckus he walked away. One person alone may have had a bad time.

At night we set Critter gitters around the camp as alarms.
P

I usually bring a double action revolver for the group. We see bears in camp in the woods fairly often. My dogs usually chase them away.
I worked in SE Alaska and saw bears every day. For that I carried a rifle.

Now I don't trust people nearly as much as I used to.

VernAK said:
Six of us were sitting around the campfire on a miserable day last August when a large boar grizzly walked right into our camp with 30 feet of us. My shotgun was in my tent about 50 feet away. when we all made a ruckus he walked away. One person alone may have had a bad time.

At night we set Critter gitters around the camp as alarms.
Click to expand...

Given that a grizzly can hit speeds up to 30-35 mph and cover 44-51 feet per second, I'm curious if you've played out what you would have done if your shotgun had been next to your seat or in your lap as opposed to 50 feet away in a tent. I'm not sure what I'd do -- other than piss my pants.

Both people I know that got mauled had a rifle. One was asleep in his tent when he got attacked. He wasn’t able to prevent it but he was glad he had the gun while waiting for help. The other guy was gutting a deer and his rifle was leaned against the tree. He ended up killing the bear with his knife but got all chewed up in the process.

I usually carry both in grizzly territory and would more likely would use the spray before the gun. In the Adirondacks I would feel safe with just spray.

As I've aged, and since I sleep in my van in all sorts of suspect places while driving long distances on canoe trips alone, I've become more concerned with weapons for my personal safety in our deteriorating civilization. I carry a variety of knives, machetes, a billy club, a baseball bat, and my bear spray in my van, but I haven't yet packed my 12 ga. shotgun, which is the only gun I've ever owned.

I've thought about getting a handgun, but the cost and permitting hassle is substantial. While the USA may have more permissive gun laws than many other countries as a matter of Constitutional theory, as a practical state law matter there is a spiderweb of inconsistent regulatory laws as you travel from state to state. I distinctly recall the big billboards as you drove into neighboring Massachusetts. Instead of the usual type of sign that would say something like "Welcome to the Bay State", the billboards blasted an in terrorem warning that you would be jailed for two years and owe a $5,000 fine if you were carrying a gun even if unloaded and permitted in another state.

In the canoe, I am less concerned about homo sapiens sapiens and the remaining homo sapiens neanderthalenis, so I carry only bear spray. But I would probably take my shotgun if I were ever to canoe again in brown bear country.
R

Every local I run into traveling in the north carries some sort of firearm, and I’m no exception. I always pack something, bears would be the main reason I suppose, but I also sleep easier having something for other emergencies like running out of food or signalling for help. If I could carry a pistol or revolver I would, unfortunately that will never happen in Canada. Instead, it’s a youth sized 20ga 870 in black bear country, and a 12 ga winchester marine defender when grizz/white bears could be around. When the kids tag along, the RedRider BB gun comes too. It’s great entertainment!
I am a proud Canadian gun nut!!
M

Sometimes I carry a 9mm. It depends on where I'm camping. I usually have several run ins with local police or Federal fish and game on the winter trips, so I don't carry for those trips. It wouldn't be a big deal if I did, I just want to avoid the initial conversation, no need to worry some poor dude who just Schlepped out to wherever I am, and is now confronting a barking dog and a wildly bearded manic hobo wearing a tactical military drysuit and a karate kid headband. You can see it in their eyes, like, wtf... why my shift?? Lol it always ends well, after they run my info and a light gear search. A gun would just confuse things.

been hiking, camping, paddling, and snowshoeing all over Canada for 60 years, and haven't seen the need for a gun yet. Even when paddling the Athabasca, which has inarguably one of the highest rate of encounters with brown and black bears in the country, a simple bear banger was more than sufficient. My bangers ride in a neck pouch loaded and with the safety on ready to pop one off in an instant. I really don't want to take the time to uncase, load one in the chamber, and aim and shoot at such a small target as the chest or a limb(headshots tend to bounce off it's skull because of it's density and curvature) when a critter that can cover a football field in 4 seconds is charging...
and yes, I was tracked by a griz on the above trip UNTIL I fired off a couple of bangers, then it took off so fast it's butt passed it's head in it's hurry to get away from the crazy 2 legged creature...

Haven't seen the need for a gun yet. And it takes commitment to training and keeping in practice which I am not interested in.
Otherwise I could literally shoot my eye out.
You must log in or register to reply here.