Around the 18 minute mark of the Wood on Water video that was recently posted by Robin, they detail the shaping of a carry bar that uses the paddles to complete the mechanism by which the canoe is portaged. Has anyone tried this? Advantages / disadvantages vs a sculpted portage yoke? (or a pool noodle wrapped center thwart?)

Doesn't apply to me as I use a dedicated solo but sculpted portage yokes are recent. The method Keewaydin uses has worked well for tandem canoes for eons. The disadvantage is if you are not practiced it takes time to secure the paddles. As in anything else practice makes the process shorter.

I think of the Bourquin pads as an adaptation of the paddle carry allowing portaging without having to fashion up the yoke but the disadvantage there is that you do have to secure the paddles somehow. We used the pads for twenty years on our Grumman in Algonquin and Temagami

I read that the real reason for the carry bar is to distribute the weight of the canoe on top of the gunnel structures so that the weight is not born on the bolts attaching the center thwart. Traditionally, similar carry bars or planks were used with bark canoes which had the center thwart mortised into the inwales (typically made of softwood cedar or spruce). This was a major weak point in the construction. You can faintly see a cedar plank carrying bar stretching across an over the gunnels in the top photo below: 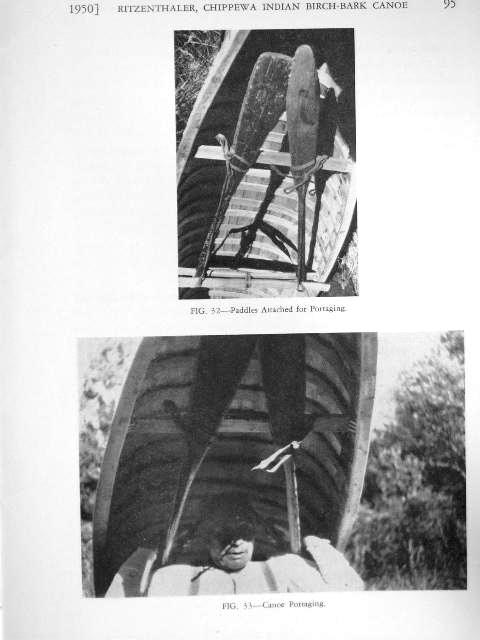 Later when bolted thwarts started to be used on cedar-canvas boats, cracks / breakages could occur particularly if the inwale was made of spruce. The pic below shows the lip at the end of the bar which stretches over the gunnel structure so basically the carry bar is used to prevent potential weakening and a catastrophic breakage at this point of the hull. 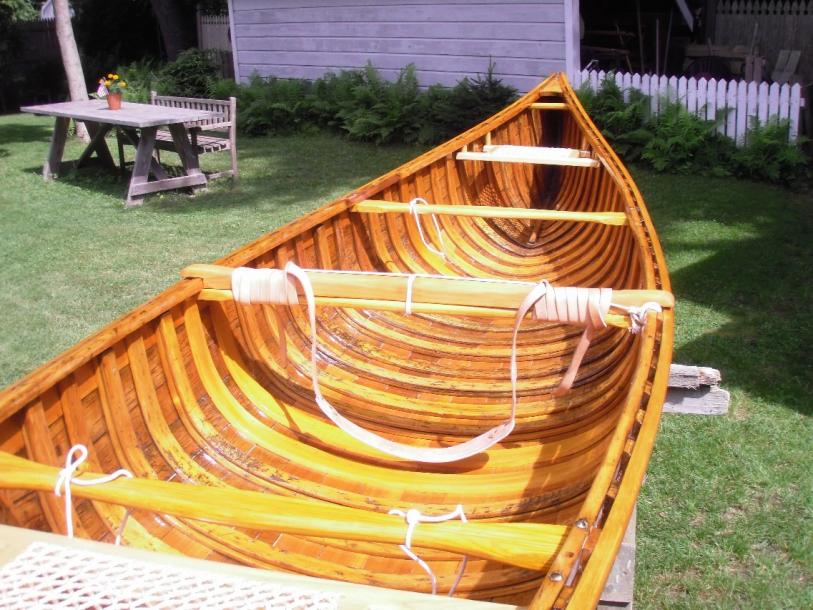 The spruce inwale on my '70s Langford canoe has cracks at this location. 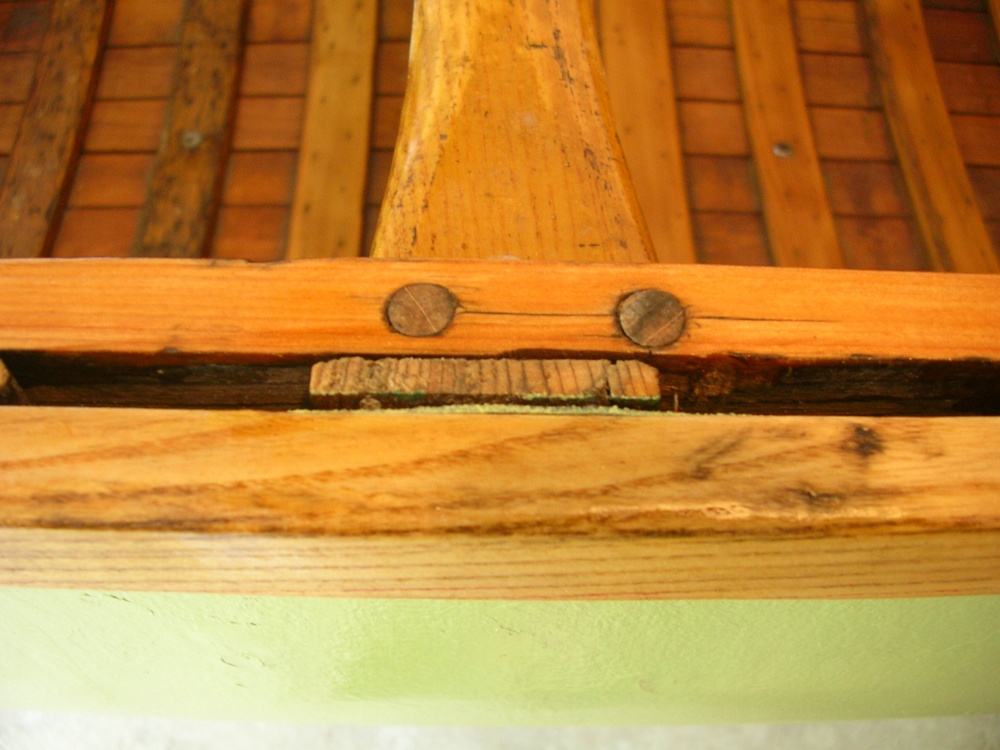 ... but I've been able to extend the usage life of the boat by adding on a carry bar. In the end, I combined the design with a set of pads to assist with the comfort factor though the picture below was taken before a tumpline was secured. 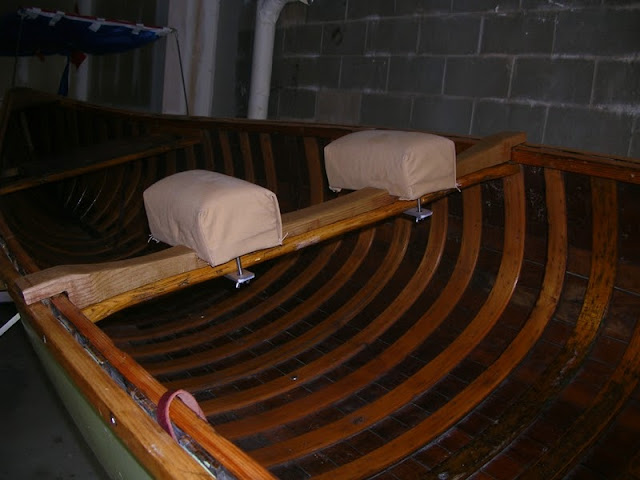 Think it's also worth noting that with the exception of these traditional tripping camps (and a few folks on this site like Robin), most paddlers don't trip that hard or in remote locations with their wood-canvas canoes anymore. So the risk of an actual breakage is likely quite low. Also finding full length, quality grained spruce for inwales is exceptionally difficult these days so many builders are using tougher ash which might handle the center thwart stress point issue a bit better than a softwood.

I enjoy the use of a sculpted yoke on my 14' cedar canvas but don't use this boat for hardcore tripping like the Keewaydin crews. Still its been a few 3-day trips and the permanently lashed tumpline ends are useful to secure the paddles for the carry. 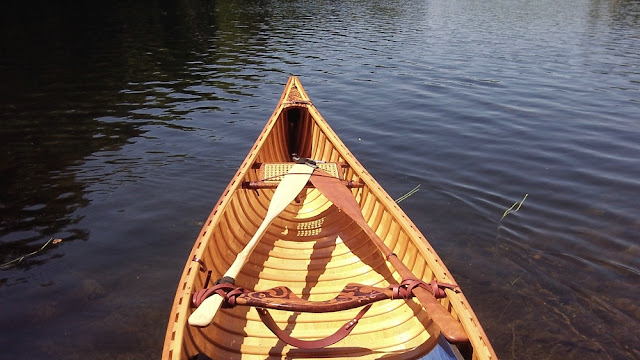 None of my dedicated solo canoes has a center yoke because that would interfere with a centralized seat. I've used the same removable, adjustable-width, clamp-on yoke on all my solos for 40 years. It has the same structural advantage as the Keewaydin carry bar, except that it can be positioned in various places along the center area of the hull, or to different width hulls, because the gunwale clamps slide in adjustable slots.

You can see this 40 year old solo canoe yoke clamped into its "paddling position" in the stern of my Hemlock SRT in this picture: 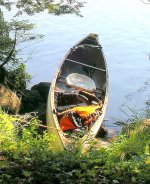 I made a bigger adjustable, clamp-on, sculpted yoke for my tandem canoes. My MR Explorer had no center thwart because I removed it to put in a wide cane, centralized solo seat. I also used this wide clamp-on carry yoke on my 17', 82 lb. Old Town OTCA because the carved central thwart was too uncomfortable to portage with and also looked too delicate to support the weight.

From the looks of Murat's carry bar, it seems to me that it might substantially reduce the inwale-destroying force on the central thwart but not eliminate it, because the carry bar would still seem to press on the thwart. Putting an adjustable-width clamp-on yoke next to the central thwart will eliminate all force on the inwale, plus it can be moved even further away if desired to to adjust balance and can also be used on other canoes.

I've used my paddle blades to make a yoke and it works pretty well but you don't need the carry bar for that. What Murat said makes sense to me. The only reason I could come up with was that maybe they had to raise the height of the thwart to prevent your head from hitting the bottom of the canoe when using the tump. I've only experimented with a tump on the yoke and didn't get it figured out but I can tell that the geometry felt different.

I have para cord permanently tied to my thwart to hold the paddle blades which rest on my shoulders. I have a bungy tied to the bow seat with an overhand knot on both sides of the seat frame and slip the grip ends of the paddle through those knots. I don't think it takes more than thirty seconds to secure both paddles and even less to take them out.

I liked how some of the girls at Keewadin wove the ends of their tumpline through their open gunnels.

I've carried many 17' Grumman white water canoes for hundreds of kilometers using the tied in paddle routine. If you get the spacing right, it is actually far more comfortable than a shaped carrying yoke, as there is no pressure on the back of the neck. However, beware if you are walking a really rough or loon shitty portage where there is a good chance of wiping out. If you have the blades to closely together, and then fall, the paddles will attempt to remove your ears and leave you as a bleeding pinhead. Then afterwards, when your ears swell, you will be Dumbo, the portaging elephant.

Thanks for posting this picture Murat. Before the Keewydin video I didn't know "carry bars" even existed, never saw one before and really didn't understand what they did untill you explained it.
For me, it now makes perfect sense. On the last trip I took with my old Chestnut Pal the inwales where original and there was some obvious stress going on with the center thwart/inwale bolts area. After the canoe gained some weight from a pesky leak that developed in the old canvas, it gained some weight and I bet I was lucky to make it thru the finals ports without an inwale giving out.
What do they say? Old dog, old tricks or something like that. :-(

The lashed paddle approach worked very well for me until dedicated yokes came along, particularly if a PFD was worn as additional shoulder padding. I agree some deep dish yokes are too sculpted to provide comfort. The Temagami carry bar was always lashed in with leather tump so as to be removable much like tumps on wannigans.
80 pound canoes and 50 pound wannigans have never been in my past and most certainly don't figure in my future plans but I sure do like seeing them.
My son picked up an old w/c canoe this summer; a Pete. It's safely stored up in the rafters of his garage so I can't lay a hand on it right now to see what it's thwart arrangement might be. IIRC there's a simple center thwart. Aside from the canvas and gunnel screws it looks entirely original which makes me relieved and happy. Now I'm convinced we'll stick with the lashed paddles rather than modernize with a yoke. Although adding a carry bar and tump would complete the picture. There wasn't enough room in the garage (what's the truck doin' in here anyway kid, this garage is for canoes), so I wasn't able to give it a flip, but it felt remarkably light...maybe 60 lbs?
Last edited: Nov 24, 2021

I found this old picture of my Pal before it got new ash inwales. You can just see a crack where the bolt runs thru both the center thwart and the inwale on the left. I guess I was lucky that it never broke on the trail. With new ash inwales now, I'll forgo a carry bar on the Pal, but that 14' wood canvas Fox I have with cedar inwales will get a "carry bar" for sure.
Good thread, very helpful.. 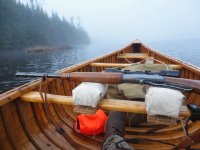 A guy over at another website is restoring an old Picard tripping canoe. He got it with a carry bar and extra wanigan ribs plus 1/2 ribs.
A real tripper that canoe, I'd like to find a Chestnut Cruiser or Prospector like this.

memaquay said:
I've carried many 17' Grumman white water canoes for hundreds of kilometers using the tied in paddle routine. If you get the spacing right, it is actually far more comfortable than a shaped carrying yoke, as there is no pressure on the back of the neck.
Click to expand...

If it's putting pressure on your neck, it's not well shaped. none of my yokes have even touched the back of my neck because they're scalloped at that point specifically to prevent that from happening.
You must log in or register to reply here.