After enjoying Robin's Quebec trip and the Quetico Campsites Star Ratings thread I wonder what exactly different trippers prefer in campsite choices? There are so many variables, especially if time and weather permits. Firewood if needed. Ease of access. Wind or bug protection. Good swimming. Tent pad(s)/ hammock space. Fire ring architecture?
I know what I look for in an ideal campsite. What do you look for and how do you evaluate them? What is more and less important to you and your trip?

My ideal campsite is first and foremost unoccupied. Not being Spiderman, I don't care for slanted slab access points. A level tent pad without large roots or rocks is important. Shade trees, hammock and tarp hanging trees are a plus. Points are nice for breezes and views. Swimming area that is gently sloped with a sand bottom would be luxury.

A good view in a prime location counts for a lot in good weather... these two (the other is on the small island) in the Algonquin area are pretty spartan and I doubt they'd be five-star in terms of being able to comfortably sit round the campfire while enjoying an ale, cooking, providing some available firewood (you have to canoe away some distance for that) and offering shelter during storms. 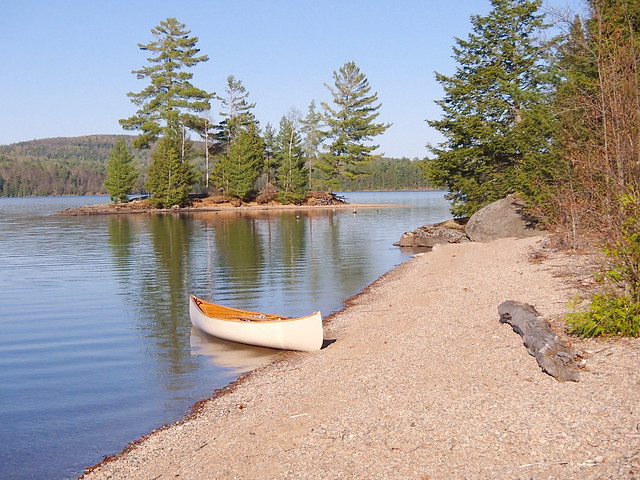 Don't forget about the views after dark... 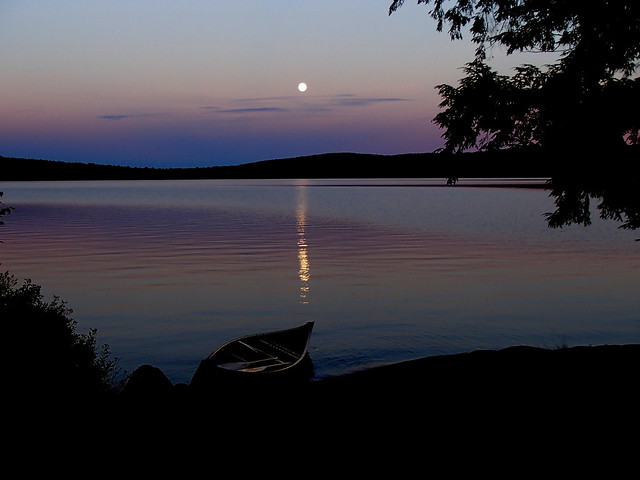 Sites with easy landings for ease of loading/unloading boats, and plenty of flat, root & rock free tent sites are top of my list. That being said, a site with a phenomenal view and out of hearing range of any other artificial human noises can balance out poor tent sites or tricky landings. A barred owl calling during the night is a plus, as is an absence of poisonous spiders or snakes. Other than that I guess I'm not too picky so long as I have time off work.

I'm not too picky about the sites I stay in. I turned one down because of all the fresh bear scat on the take-out, another with goose poop, and a 3rd because the night before's visitors trashed the place, we ended up staying at the site they trashed the next night. (Cunliffe Depot/Twin Brk)

I do like a good campfire but it seems people really don't know how to build them or use them. I've spent a lot of time rebuilding 'Firepits'.
A

Too many times sites with nice views have gotten a little exciting when the weather suddenly turns. Just give me something flat with some wind protection. Don't care about a fireplace and often don't even care about firewood. I generally set up camp late in the day and break it first thing in the morning so I'm not really looking for a place to relax and hang out long term.

What really makes a campsite 5 star for me is for the woods to be open enough to go for a walk. Sadie agrees with me on this (but she also said frogs are very important to her as well).

I change my mind depending on the weather.
Absence of things that could kill me is paramount and second is ease of access to the water both for unloading and obtaining cooking water.
Sometimes I want an east view as the mornings can be chilly and an early sunny campsite is wonderful. Sometimes I want something else if it is windy. Or something else if it is buggy and I seek wind.
Depending on where you are just a clearing is what you seek. ( spent time in Wabakimi where there were few discernable clearings that were not on a slabby hill). But not a forest fire clearing.

Sadie must have some ability now to sniff out the best value in campsites for frogs... my experience with dogs in the canoe has not been good, every one was nervous, anxious to jump out at the first opportunity since staying in the canoe was unfamiliar.

The worst was a beagle (they're known to have runaway tendencies if they sniff something off in the distance) that was on the edge of a small cliff and wanting off. So I paddled in close and the beagle got in. After some time spent paddling back to the access, I stopped at an island to stretch and the first thing the beagle did was jump out and run into the woods. As far away as possible, to the other end of the island. Good thing the island was small and the forest cover was open and not a thrash to retrieve the runaway. The owner's phone number was on the collar and later that night he was glad to hear the news.

A campsite might at first look good or bad, maybe ticking all the boxes or only a few... on a fall trip late Oct, early Nov, I paddled down Grand lake at the NE corner of Algonquin to Clemow. Four campsites there and all looked less than ideal, getting out for inspection. Not good, not much attraction to any of them. The outlet of the lake had been blocked by beavers several years earlier and that killed all the pine trees around the margin of the lake... which looked bad at first, bleached bare trunks and branches looking desolate.

I picked out what seemed the best and settled in... the ground on the small clear spot to pitch a tent was glacial till, everything on the surface from sand to boulders (later finding out it was a glacial drumlin noted for it's geology as a protected earth science feature) so the proper placement for the floor needed to be in exactly the right spot, then lying between exposed boulders)... but proved to be comfortable held in place between the rocks for a good night's sleep.

And the extremely large numbers of dead pines near shore meant that it was easy to find the right-sized logs for sawing up into campfires late into the night. Two nights there, both enjoyable and during the daylight hours there were woodpeckers drumming on the dead trees looking for insects, a very relaxing sound.

The next two nights were a return to Grand where there were more luxurious campsites with much more room for moving around in and pitching a tent, open rocks with views to sit on and good campfire spots... which should have created more enjoyment than the cramped and rough bouldery one at Clemow. But for some reason, the campsite picked out did not provide anything better... something about the sense of being and staying there was not as good... for some unknown reason, whatever it was. Anyway, not that big a deal. On the plus side, there were waterfalls and cliffs and long views and nobody else that late in the year on the much larger Grand lake... so... no complaints.
Last edited: Sep 12, 2021 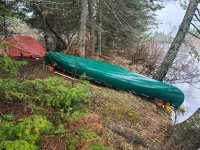 Sometimes you take what you can get! It was getting late on an early season trip down a remote stream in the North Maine Woods. All I wanted was enough room to get the tent up without too many roots, rocks or widowmakers.

Brasenia exactly. Looks like you had a lot of wetness!

This was midway through 24+ hours of nonstop rain! It did make the next day more fun though! 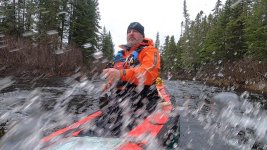 Depends on what season it is on the rivers. If they will be releasing water from the lakes. Then we will chose high ground incase they turn on generators or release water during the night. And you can not be to picky then because you need to stay on the public waterway and not encroach
on private property. During the dry season will pick the nice sand or gravel bars.

Yes, plan B can sometimes come into play. A sudden squall, an inconvenient storm, or a plan A fail can lead to a compromise.
Quickly grabbing a site for inclement weather reasons has often lead us to make do with less than ideal site situations.
No wood. Windy aspect. Poor tent location options. Adapt, adjust, accept. 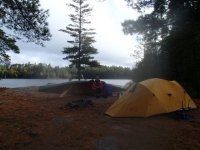 I travel with my dog Jake. When possible, I prefer an island so he can roam without me worrying much, but like Alan said, woods to hike/ explore near by is a must. Outside of that, I need a bit of flat space and trees to tie my lean1 and hang a tarp.

we like traveling hard for days, then base camping to really fish and explore an area in depth, so we are a little more picky when base camping. If a base camp has a poor landing, I build one from timbers collected at or near the site, but on our last day, it all gets thrown back in the bush.

I never like to camp on an island very far from the mainland. Years ago on a group trip I suggested we head for the west shore of Grand Lake Victoria in LaVerendrye, Quebec but was over ruled and we camped on a small island on the east side a good ways off shore. We got wind bound on that island for over a day as we watched a canoe paddle down the west side out of the prevailing winds.

This spring when I abandoned a decent small island campsite on Millimagassett Lake in Maine because of an active loons nest, my options where an off shore island campsite a good distance away or make my own site on the nearby shore. I choose to make my own and it turned out to be the right decision as the wind picked up and I would have been stuck on the island campsite for the day.

Spent two days windbound on Pillsbury Is. Eagle Lake. Hoped to camp at Smith Brook but it was occupied. Fortunately had a book to read. Not in favour of sandy sites. Next to impossible to keep the sand out of tents, bedding, and food.
A

I am not a fan of islands. Often they are overused and overtrampled Farm Island is pretty big though. Once on Agnes Lake a huge wind came up. Throwing spray 20 feet up on the far shore. Because I had camped on that shore I was able to sneak up that shore in a wind shadow and cover the length of the lake which is about 13 miles.
I never thought of islands as a potential wind prison but good point

Robin said:
I never like to camp on an island very far from the mainland. Years ago on a group trip I suggested we head for the west shore of Grand Lake Victoria in LaVerendrye, Quebec but was over ruled and we camped on a small island on the east side a good ways off shore. We got wind bound on that island for over a day as we watched a canoe paddle down the west side out of the prevailing winds.

Relatedly, one of the most important things about a campsite is that it's on the correct side of the lake, any important crossing being already made. When I'm camped on the wrong side, the nighttime breezes in the trees sound like taunts from the wind gods, "It will probably be OK if you get an early start, HUH, HUH, HUH!"
You must log in or register to reply here.