Not a lot of options.
D

these Voyageurs probably did have to clean their underwear after this

deerfly said:
they probably won't leave the spray and/or weapon behind ever again
Click to expand...

It is typical for safety equipment to be ineffective or not readily available so they may again be caught off guard but it is probably less likely. I had a bear in my camp and encountered a moose and mountain lion along the trail while backpacking. I did not see any of these animals until they were near enough to launch an attack.

I try to have a sound plan so that I can enjoy my trip with peace of mind.

I enjoyed the video, thanks.

…..and a voyager is a black bear delicacy.

Exciting video. I think that bear was predatory and trying to take down one of the guys from behind as it would a trailing deer or caribou.

Very unnerving. The bear didn't seem too certain about what to do either.

Glenn MacGrady said:
Exciting video. I think that bear was predatory and trying to take down one of the guys from behind as it would a trailing deer or caribou.

What if the bear can't count?

The bears I've encountered in Labrador (and just over the Quebec border) seem more curious than anything and they don't seem to think much either way about humans especially when berries are EVERYWHERE.

They are much less skittish than Ontario bears and MUCH bigger........ 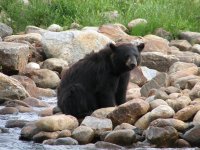 I dunno, looked like the little guy wanted to play.

Not sure if it was predatory or just a confused yearling. It seemed like the bear had no idea of human.

Didn’t look predatory, just curious, probably wanted to get in on the selfie. Just a young bear looking for company. I suspect if they’d had a whistle that would have been enough to be scare the bear away, probably a good idea to carry a whistle when portaging anyway. Very useful if you become separated to let another group member know where you are.

I think the bear was curious as to how those two legged critters tasted, it did charge them from behind before they saw it.

I'll leave my gun at one end of a portage but not the spray. If those guys had a little more defense(spray) they would have had the confidence to aggressively chase the bear away. With nothing but that dead dry little stick for protection they were probably afraid an aggressive approach to scare the bear might backfire.

I didn't hear much of the audio towards the end but it seems that they still had to cross the port one more time.
R

I, too, was confused about which way they were going on the portage. On the video they have no loads so it seems they were coming back to get the canoe and whatever else they had left behind so I assume that they had to go over the trail to get that stuff to the other end of the portage. I wonder how they completed the portage.

I agree with the many comments about having the bear spray with you at all times when you are on land. My solution to the problem of having the bear spray easily available was to purchase a chest harness for my bear spray. I put it on when I get to shore and take it off when I re-launch. I chose a chest harness so it wouldn't get in the way of waist straps and so I could put it on top of whatever outerwear I had on and so a backpack didn't block my access to a belt holster. Works for me although I've never had to use it. I'm sure others have other solutions.
P

Good video. I saw no attack, just an encounter. More people need to realize that a small percentage of black bears behave this way.
A agree with Glenn that this is likely predatory behavior. They are pesky and hard to get rid of. They sometimes leave and come back.

Carrying a handgun is handy at a time like this. A warning shot could have ended this quickly. A handgun is always on your person and not leaning against a tree or in the canoe. Not legal in Canada. Bear spray is a great idea in a holster on your belt ready to employ. Having two people was a great advantage.

If you paddle a lot, remember this video.

And bear bangers.. I think they are legal in Canada ( not sure). They require practice aforehand though. What struck me about the video is the....blackflies... hordes. I will take the bear! Quite a nice study of a bear. You might think predatory bears are habituated to people bears but Canotrouges friend proved otherwise. I wonder what the berry situation was. On the trail is sure not the place to play psychologist.

In fairness to the bear, if I had been stuck on the portage trail behind these guys and had to listen to their "A voyageur ..." banter, I might have been tempted to attack them myself.

With an attack coming from the rear, I'm not sure bear spray or a firearm is going to be much use to a solo canoeist -- at least not against a determined bear that is more confident or hungrier than this one seemed to be. Unless, that is, you walk down the portage trail like this. 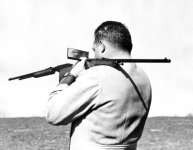 I would assume a predatory bear would look, I don't know, a little more predatory. As in doing something other than non-chalantly lying down.

Of course that's easy for me to say because I'm no expert in bear behavior, have never had a serious encounter with one, and I'm warm and comfortable at home watching this on the internet; the last of which gives me free reign to express my opinions, no matter how ill formed.

Either way, better them than me. I be they didn't notice the bugs anymore for quite a while. Wonder how they slept that night?

I wonder what vibes the bear picked up.. The guys were so upset and the bear lying down as if to say "good show to watch; think I will stay" I like to think I would be walking backward talking to Bear quietly. ( and probably falling backwards over something) but of course who knows.
P

They left.
I would be standing my ground and swearing in a loud voice.
Slink away from a bear like this with the usual quiet talking and you are going to be followed. It has happened to me a couple of times. Make yourself big and loud. Having two people helped these guys a lot. I would be throwing some rocks. Good time for bangers, an air horn or a warning shot.

It is a mistake to think that this bear was just observing. He was thinking about his alternatives.
You must log in or register to reply here.

Bears in the ADKs
2