Patrick Corry said:
I haven't fully decided what to do with the outwale extension beyond the stem band. My original thought was to cut it back to the stem band and taper the ends.... but now I'm not so sure. I may keep 'em long for a bit. Maybe even wrap them with split Spruce root like a birch bark canoe; or, cap with a copper or brass cap
Click to expand...

I kind of like the extended look, which doesn't look as extended as originally. (Is it?) Copper caps become stained quite quickly. Not sure about brass. How about just wrapping some of the same brass stem band horizontally around the nose. More subtle than ostentatious, but also a little protective.


Patrick Corry said:
At the beginning of this process I anticipated making a sling style seat which could be adjusted to find that ideal seat location. I have since realized that this canoe is built too lightly to allow a sling seat which will pull the gunwales inward once weighted.
Click to expand...

One option is to fill a strong 30 liter dry bag tightly with packing peanuts and use it as a lightweight, floatable, infinitely movable seat. A 20 liter bag is not big enough from my personal experience. 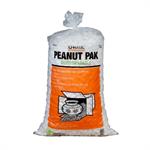 absolutely gorgeous, now go use it and take lots of pictures to share with us.

Beautiful job Patrick. I like the way it looks now, seats are optional if you can kneel on a thwart for a couple hours. I think you will like that portage yoke. My White has the same one and it's comfortable as is for me.

Well, to be mentioned in this thread is an honor, your craftsmanship and attention to detail is outstanding. Very impressive, I can see some fine trips being taken in that canoe. Finding that sweet spot for the seat will be fun. I agree, set it for tripping with the weight of your outfit to balance things out. Outstanding, Thanks for sharing it here.

On the seat topic, I re-installed the aftermarket seat that the prior owner had installed: 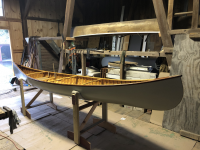 I think it's going to be pretty far aft, and I dislike the flat stock aluminum hangers the guy made. Also, the weight of it destroys the balance of the canoe on my shoulders. I would have to either move the yoke if I keep the seat, or counterbalance the front of the canoe with something equal in weight to the seat.

I made a softwood kneeling thwart to try out... the canoe came with one original mounting hanger pictured loose on the thwart I made just for experimentation. If I like it I'll make one out of walnut with matching hangers just for aesthetic contrast. Second picture shows the relationship of the seat to the original kneeling thwart location, next the kneeling thwart without the seat, and finally the kneeling thwart viewed from the side to show the forward tilt. Should be interesting, but I can't imagine doing the kneeling thing all day! I'm pretty sure I'm going to want a seat. 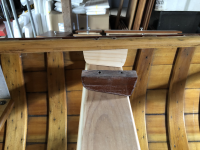 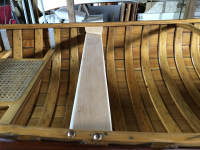 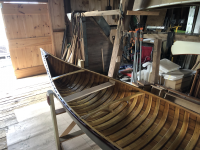 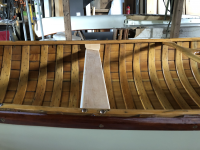 One interesting note is that since this is a dedicated solo rather than a "turned around tandem paddled from the bow seat", is that I can now stow my outfit farther forward since there's no seat in the way. My two packs can be end to end rather than side by side. That'll change the trim for sure.... just how much is to be determined. Lots of experimentation ahead.

Thanks Al, I'm looking forward to seeing how this yoke feels.

Glenn, that outwale overhang is still as original. The only thing I cut off were the inwales which on this canoe extended alongside, and beyond, the narrow decks. The space left after removing them is nearly the same as the width of the brass stem band which now bends up onto the deck. I'm going to live with this arrangement for a while to see how I like it. Good idea on the moveable seat!

I test paddled the canoe with the kneeling thwart, and while it was acceptable for a 2 hour outing- the first time in the water for this restoration- I wouldn't want to use this for all day paddling or tripping. All day kneeling isn't in the cards for me. So, I installed an aftermarket cane seat I had on hand, using the original position of the seat installed by the previous owner. For day paddling it's a bit too far astern so I have to counter balance with a mostly-filled 5 gallon water carrier, but for tripping with my usual two pack load it should be just fine.

With regard to the water carrier trimming option, seeing that constantly in my vision just destroys the traditional look of my wood/canvas canoe. I think it was a comment Robin made in another thread, and a recent discovery I made, has helped me figure out how to accomplish better trim but in a more traditional way. I recently met an older woman who is selling her husband's power woodworking equipment, and during a visit to her garage to check out an old Porsche, I noticed a pack basket on her husband's camping equipment shelf. She's not ready to sell that stuff yet, but I think putting the water carrier within the pack basket will look great. So, that's my plan... now I just gotta talk her into it, along with some woodworking tools!

If you look in the car photo, you'll see where I spied the pack basket on the shelf just above the flourescent yellow tag. 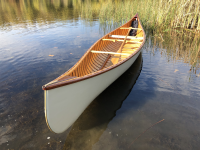 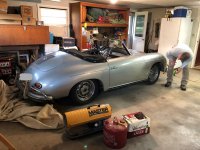 Chestnut Chum Restoration or is it a Chestnut "Doe"
2