Why you shouldn't paddle a kayak....

Because a seal will slap your face with an octopus....

not available in Canada, but I think this is the same.
https://www.youtube.com/watch?v=uEBl62tL6iY

Possibly why you shouldn't mess with wildlife?

The seal was merely expressing his displeasure at the DDB (Dirty Double Blade).

This one sadly says it all. You will notice me in the blue kayak with a canoe paddle and in the near distance my wingman using the dirty double in the little green canoe. She never did give it back to me. I am sure this covers all the bases....lol.

Cool. It is common in Puget Sound to have seal lions and salmon swim under the boat. Sea otters are around. Orcas are in the neighborhood and the ocean is in your lap.

So the lesson learned is wildlife can oftentimes be unpredictable.

I have a friend who can't keep his hands to himself. I better explain. On hikes and even bike rides I've noticed he has the uncontrollable desire to pick up any small creature he can lay hands on. Often snakes. I have no squeamish issues but have on a number of occasions strongly suggested that it would be preferable to simply observe wildlife from a" respectful (to them) distance rather than pursue them to pick them up. I described his behaviour to him as ego tripping harassment. I admit it's been a lifelong daydream of mine to whistle and have a raptor land on my shoulder, just like that. I would then pull a dead mouse from my pocket and reward my new wild friend. (Yeah, like I carry dead rodents in my pockets, ever.) The owl, hawk, or eagle would then lift off and be gone. How cool would that be!!? But I know this adventure would be way cooler for me than the wildlife. Ergo ego. But my friend each time just gives me a smarmy smile and coos over the serpent saying "I think it likes me, really. There's no harm!" Our last encounter last summer he finally heard my whispers "Bite the sonovabitch!"
In this video my empathy lies with the sea lion and not the paddler (whatever the blade). Okay maybe mostly the octopus.
Last edited: Jan 14, 2021

Don't be so quick to squirt ink at kayaks. If the guy had been in an open canoe, he may have had the irate octopus as his bow paddler.
D

But sometimes you gotta Kayak to get to some places 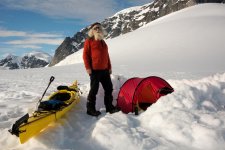 Was that the Kayak expedition mother ship?? See what happens when you kayak?!


Actually, Nancy and I were primarily kayakers until a year and a half ago. I just felt like stirring the pot a bit....

Seeing that picture with the slope in the background makes me wonder if the 23 year old me would have tried sledding for at least a short run in a kayak.......

Best regards to all.

You know Stirring the Pot with Friends is one of my favorite things to do. One of my best friends is a dyed in the Wool Kayaker. I lightly Razz him about his Skirt ! But in truth, he can do some amazing things, I wouldn't even Dream of !

That Pic of Dan Cooke ? Another example of what a kayak can do. Oh that looks Cold ! Where can you stick a Hot Tent in that Kayak Dan ? ​​​​​​​

Glenn MacGrady said:
Don't be so quick to squirt ink at kayaks. If the guy had been in an open canoe, he may have had the irate octopus as his bow paddler.
Click to expand...

Oh yeah.. Think of one paddle per arm.. That is what you want for the bow paddler! I know boa constrictors and gators are totally useless.

Back to wool. Jim wheredo you get a Wool Kayak??


real men wear skirts. Who canoes in a kilt?

yellowcanoe said:
Back to wool. Jim where do you get a Wool Kayak??
Click to expand...

They're on the rack next to the other winter kilts.

Come to think of it, a wool kayak might go well with my sons and nephews in their kilts at the next reunion....if the kayak is in the correct clan tartan. I can see it now "Gee Uncle Lance, what are you wearing under your kayak?"

I can't speak to boa constrictors and gators but I can tell you that a just rescued scared loon that had been trapped on a pond too small to get a running start to take off out of can be a handful while trying to paddle back to shore even if he is wrapped up in a salmon net.

I wouldn't have believed it if I hadn't seen it. Remarkable.
You must log in or register to reply here.

I
What kind of paddle do you use in the stern?

I
Two canoe paddles from one kayak paddle?