Out for a short trip this past weekend. Paddling a short distance from a steepish rocky shore, we heard splashes as debris rolled down the high rock slab. The cause we found was a largish painted turtle sliding wildly down the rock face, knocking moss and lichen as it went. No pictures as it happened to quickly and by the time the turtle splashed down at the foot of the cliff we were both laughing too much to use a camera. Anyone seen similar? Deliberate or accident do you think? Was this some daredevil turtle out for a thrill or just some hapless Chelonian who underestimated the angle of descent.
Last edited: Jul 3, 2022

Last Sunday I watched a large painted turtle take a deliberate 15-20 foot swan dive (turtle dive?) off the top of Violette's Lock on the C&O canal.

Was it wearing an eye mask and a cape?

I saw a turtle slide down a sand bank into the water recently. Probably the fastest he's ever moved.

Seen frequently here, even on our little pond. Also seen on the Suwannee and Peace Rivers.

A couple of weeks ago on the Suwannee I saw a snapper that was as large as a vehicle tire. This is not hyperbole.

I have seen sea turtles riding waves up onto rocks and sliding back down. I don't know if they were doing it for fun(which I suspect) or if it cleans their bellies or some other practical reason.

I have also seen the tracks of grey squirrels that have slid for twenty feet or more downhill in the snow.

I think it is very possible that animals can enjoy and seek physical pleasure by interacting with their environment.

“A couple of weeks ago on the Suwannee I saw a snapper that was as large as a vehicle tire. This is not hyperbole”

Alligator snappers can get huge; the record is close to 250lbs and 3 feet across.

Common snappers usually max out at about 45lbs and 20 inches for males, and that is pretty much the record in Maryland. The non-captive common snapper record (found in New Hampshire IIRC) is/was 22 inches and 75lbs.

But years ago I was leading a trip down the upper Pocomoke, a blackwater cypress river. I came around a turn and there was a massive turtle part way up a sand/mud bank. It was not moving and its shell was covered in moss and lichen. We do not have alligator snappers in Maryland. My first thought was “What the hell is a sea turtle doing way up here?”, but we were far above the tidal reach.

It was easily the size of a large trashcan lid, and I thought it was dead. I put the bow of my canoe beside it, and touched it with my paddle. It started backing into the water and I tried to brace it there with my paddle to hold it so the other folks could see.

It was like trying to keep a bulldozer from backing up, all it lacked was the beep-beep-beep sound. I wish I had tried harder, or at least taken a photo with my paddle blade in the frame for size reference, but there was no stopping that behemoth.

Really wish I had some reference for size. I told a herpetologist friend about that encounter and he was miffed that I had nothing but memory to go by.

We have a couple of captive Reeves turtles in large aquaria. They were hatchlings when we got them, the size of a fingernail, and even then were escape artist climbers. One morning when we first got them I looked out the sliding glass doors and saw one, on the outside of the house, apparently trying to get back in.

How the hell? It was a baby snapper. Why he was clawing at the glass trying to get inside I do not know. It was cute as a button, but I did know I didn’t want a captive snapper, they are filthy, so I took him back into the woods nearer the stream.

A couple of weeks ago I'm paddling downstream and surprised a medium-size snapper that had climbed up a logjam to bask in the sun. I made eye contact so it had to jump in and as it tumbled down it got a front leg caught on a branch so it was upside down for a moment before completing it's side roll and scrambling into the water. I could see the pale yellow bottom and thought how unusual it was to see a turtle flip even though I've had a lot of memorable encounters with turtles. The very next day I'm paddling down a different river and surprise a big softshell that had climbed about 3 feet up a steep bank to sunbathe. It freaks out and as it scrambles down the almost-vertical drop it ends up doing a front flip landing square on it's back. The underside was also pale yellow. It managed to right itself before I got there to help. So 2 turtle flips in 2 days.

If you look up turtle symbolism you'll find nothing but great stuff: Patience, Wisdom, Longevity, Persistence, Balance, Wealth, Protector of Mother Earth, Peace, Magic, on and on. But you won't find anything about thrill-seeking. The 4 pendants shown are from China.

^ That, my friend, is a gopher tortoise.

Land only. Prefers sand hill environment. Endangered. We have them in Florida and on our property.

Erica said:
^ That, my friend, is a gopher tortoise.

Land only. Prefers sand hill environment. Endangered. We have them in Florida and on our property.
Click to expand...

I know, but I thought it was funny!

My last training session in Lake Hall, my trainees had just swamped, swum the boat to shore, emptied and re-entered. On the way back out I saw an ~18” soft shell. Actually, I heard it first. Breathing! Gave me a little start when I saw it out of the corner of my eye. The others missed seeing it though.

There is a lake across the street from my house. Well, glorified drainage trace with half hearted control structure at the outlet… anyway, every year about this time we get turtles trucking up into the yard to lay eggs. I cannot fathom how they get into my back yard, and once in they can’t get back out. I can tell there’s a turtle back there cause the Frenchtons bark like mad. So I go out and lift them over the chain link fence to my neighbor’s yard: he doesn’t close his gates so the turtles can make their way back to the lake.

The Lord of the Yard: 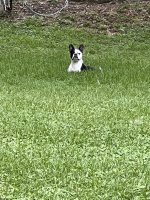