A conversation this morning with a frugal friend who found a disaster in his box of fiberglass, Dynel and peel ply, some of his leftover glass approaching 20 years old, got me thinking about the ageing out of sizing on fiberglass

I expect that how and where fiberglass is stored makes a difference in the longevity of the sizing, but exactly how long in whatever storage is a mystery.

I wouldn’t use very old fiberglass for anything important. Or maybe not for anything; I had an old roll of 4” E-glass tape that, a year after bring properly epoxied in place, popped completely off with the gentlest of tugs. The roll of 4” tape went into the trash.

How old is too old may be subjective, but at what age would you no longer trust fiberglass? That answer may be different for builders who use a lot of glass vs the occasional patch or repair tinkerer.

And, further into the weeds, what about kevlar, carbon fiber, Dynel, etc?

I dunno, I have a box of pieces, some probably over 20 years, that I routinely use for patches and odd jobs. What makes you think there is an expiry date on the stuff?

I wish to to know. My question Mike, is when the tape gave way, did it leave behind epoxy ? Or did it all come with the tape ? If it all came with the tape ? It was likely a bonding problem.
It the cloth left epoxy behind ? It would indicate the cloth as the problem.
I too have some old cloth.
Last Summer, at a local Auction, I picked up a partial roll, of Kevlar, guessing 6 oz. Enough at least for a Kevlar build.
I don't know how old it is, but your post has me thinking to do a test, before using it for a build.

Mike McCrea said:
And, further into the weeds, what about kevlar, carbon fiber, Dynel, etc?
Click to expand...

I never heard of fiberglass sizing, so I looked it up. Turns out, it’s a thick patch of weeds Into which Mike invites us.

What glass fiber users need to know about sizings, and how new sizing developments are enhancing the performance of glass-reinforced composites.

what I got out of it is that there are many formulations of sizing, and the sizing needs to agree with the type of resin being used in the fiberglass end use. Even among epoxy products, there may be differences in the compatibility of the sizing. Incompatible resin and sizing lead to failure of the bond. So, it could be that rather than aging out, the glass sizing and resin were incompatible. Sounds far fetched, but that, and a headache, is what I got out of the article.

But if it is really that complicated, it seems like I would have run into more problems with my little FG / resin projects using various FG products and mostly West epoxies.

“What makes you think there is an expiry date on the stuff?”

Vague things I have read and heard, which is certainly no proof.

The boat I mentioned the 4” glass popping off was a kevlar Caribou sea kayak. Originally a stitch & glue design the chines are angular <. Those chines were suffering from hard use, and we reinforced them inside and out.

The outside got a 2” x 3’ strip of relatively new E-glass tape, later top coated with orange paint for Oriole colors. That 2” tape is still firmly adhered years later. 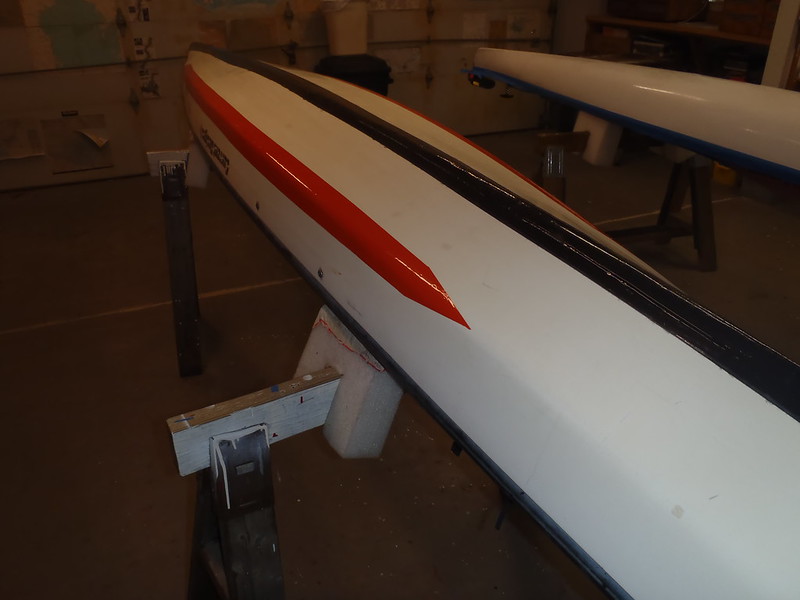 On the inside we used a 4” x 3’ strip of E-glass. Those strips had begun to lift slightly at the ends a year later, and when I gave them a gentle tug they popped right off. I kept one as a souvenir. 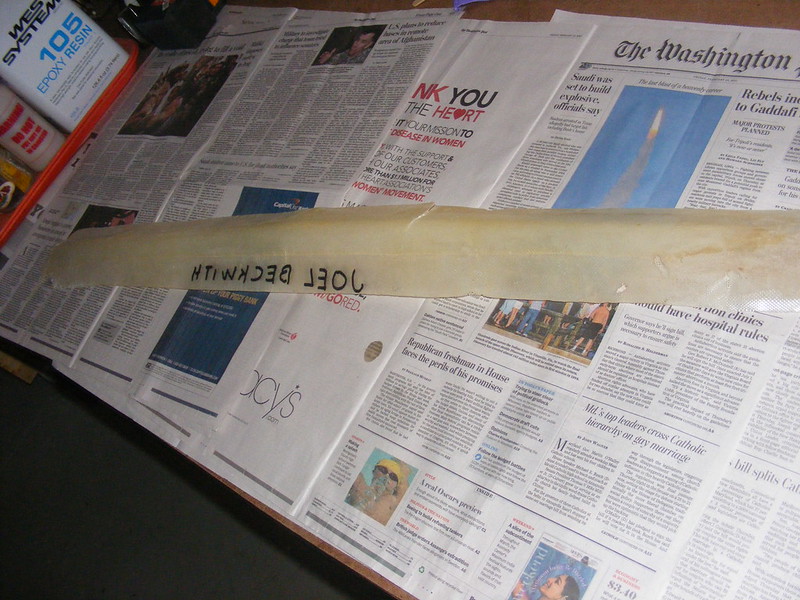 The epoxied tape came off cleanly, even removing the sharpie owner ID printed on the hull before glassing. If there was any epoxy left on the inside of the hull it was smooth and clear.

The mystery is multifold. Both inside and outside surfaces were cleaned and prepped, the 2” and 4” tapes both went on with properly mixed West 105/206. I had successfully used the 4” tape years before (perhaps 10 – 15 years before), and it is still adhered to boats I fixed 20 years ago.

“there are many formulations of sizing, and the sizing needs to agree with the type of resin being used in the fiberglass end use. Even among epoxy products, there may be differences in the compatibility of the sizing. Incompatible resin and sizing lead to failure of the bond. So, it could be that rather than aging out, the glass sizing and resin were incompatible”

That 4”tape was a bit of an unknown. I had purchased it a long time before from a small country hardware store (Foster Brothers) that was going out of business. There was a 50 yard roll of 4” tape on the shelf, in a bag marked “25 cents”.

That roll could have been 10 years on the store shelf, and another 10 or 15 years in my shop. It worked fine earlier on, and I went to using narrower glass tapes, didn’t use it for a long time, and then it didn’t work.

The saving grace was that it popped off so cleanly, and there was not a lot of time and effort to remove my mistake, so reapplying newer 2” tape on the inside wasn’t a why-dammit-why chore.

Sizing and treatment, are in the same boat to me. Guessing the 4" tape wasn't sized for epoxy ? Beings the epoxy stayed with the cloth tape though, it sounds like more of a bonding issue ? Interesting !
Lately, I have seen the issue of bonding, come up, with West System hardeners 205/206. The 207 is the better choice. According to what I'm reading.

Hopefully the new tape will hold !
Jim
You must log in or register to reply here.