Location
In the mountains North of Montreal.

That should be an interesting event. Enjoy and take some vids. G.

There is a lot of good stuff to know on that list. It sounds like a good time, and a lot of work. Have a good time.

Well, it was fun event, I haven't talked that much since I first met my wife 50 years ago. My display was a big success, lots of "my dad had a wood canvas canoe" and just lots of nice people wanting to talk canoes and trips. 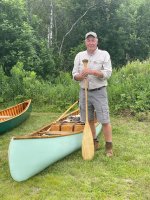 I had one issue though, Tampa Boy started telling me I needed to embrace the double blade and loose these clunky beavertail paddles. 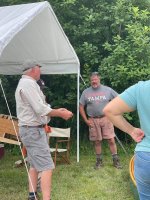 I had to set him straight and send him packing, I gave him a UFC stare down as he walked away, 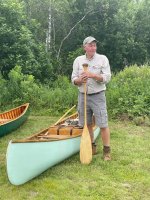 haha, just messing with ya, trying to lighten things up, he's a great friend of the family. It was fun, nice folks, and the event organizer made a special effort to make the programs kid friendly, I saw kids making fire with flint, one with friction, I saw a bunch of kids mesmerized by the on site blacksmith making all sorts of neat stuff. If a kid won an event he was given a Mora knife, they don't mess around in downeast Maine. A really nice event. 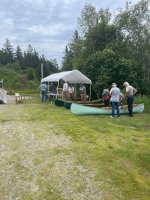