Been wondering about the graphic designs of portage / carry signs used in different parts of canoe country. Most of what I've personally seen are the yellow plastic markers with this common symbol:

A seller online is selling handmade replicas of an old sign from Algonquin Park. Thought it looked quite artistic... Anyone have photos to share of what trail markers look like in your neck of the woods?
P

For every marked portage, there must be several that are brushed in and not marked at all.

I just finished "Where Rivers Run" by the McGuffins for the second time. On their 2 summer crossing of Canada, they talked a lot about how difficult it was to find some of the old fur trade route portages. I have not paddled in Canada, but the population really thins out 100 miles from the US border. It would be a very different experience paddling past old ghost towns, abandoned cabins and trying to negotiate all of those islands and old portages.

I used to have a friend now deceased, a fellow forester. He was from Wisconsin, and went on a 2 week trip to the area that is now part of the BWCA. That was in 1938 and his outfitter was Sig Olsen. On the trip, many miles from their start, they were lining the canoes from an island in a river. They stumbled upon a cache in a tin box like cookies used to come in. The box was old and rusty, and it contained pipe tobacco, trade beads, flint and steel, some fish hooks and lures, and a compass among other things. It could have been really old. They put it back where they found it and it is probably still there. Old portage trails indeed.
Last edited: Dec 1, 2020
G

If that is the wall of your shop or man cave I'd love to see a photo of the entire wall, I'm kind of wondering what some of those signs read in full.

This is a common one along Minnesota State Water Trails. 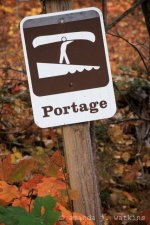 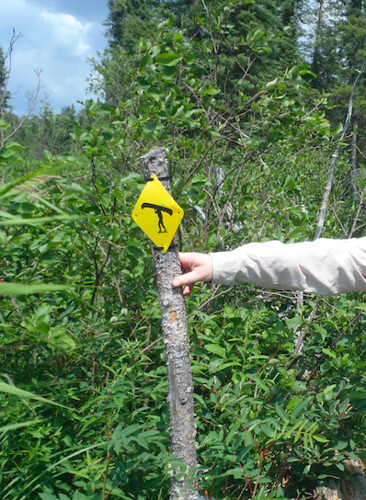 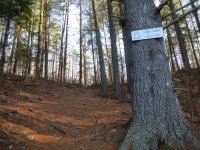 Interesting, I don't remember seeing any actual portage signs the couple times I was in WCPP

Mnoutdoorfunguy said:
This is a common one along Minnesota State Water Trails.

Ahh yes, the higher difficulty head outside the canoe portage technique. All the better to spot bears and obstructions.

Alan Gage said:
Interesting, I don't remember seeing any actual portage signs the couple times I was in WCPP

That was on Leano Lake and the only one we saw.

Alan Gage said:
Ahh yes, the higher difficulty head outside the canoe portage technique. All the better to spot bears and obstructions.

Was thinking about the head outside the canoe graphic and these historic photos came to mind... 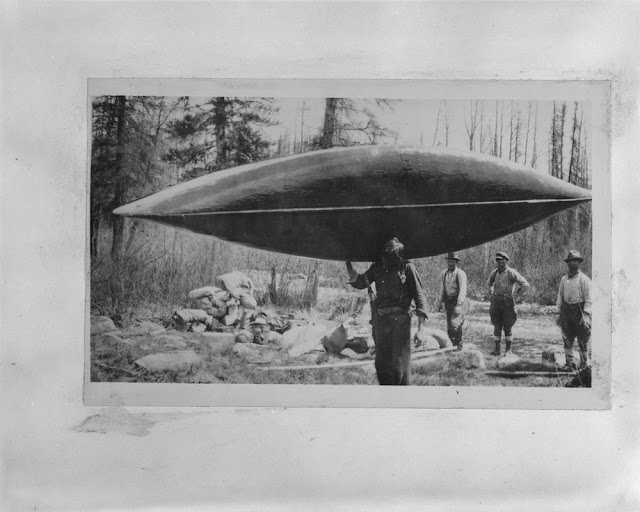 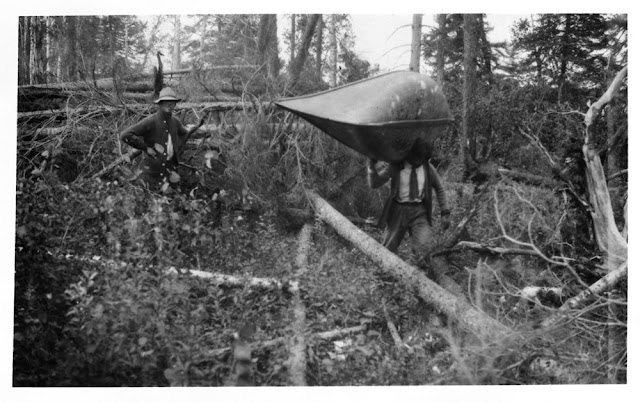 This last one was taken in Quebec. Maybe it should be the provincial symbol for their trails... 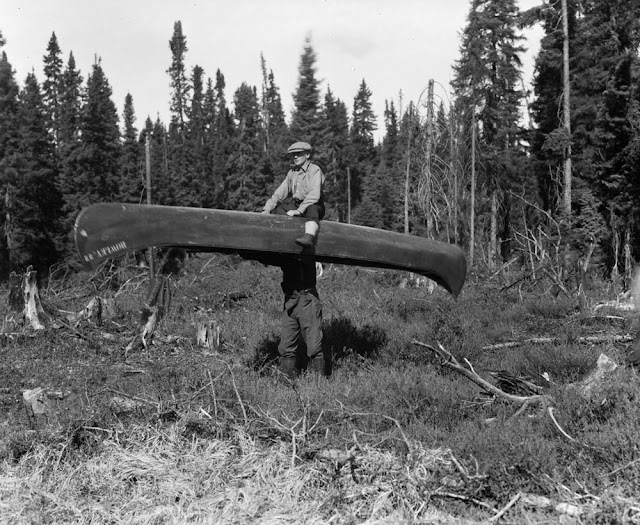 Those are a couple of funny pics! Dude freeloading on top of the canoe will be on latrine duty!

in the middle picture is that guy wearing a tie? That’s one classy canoeist! I do recall showing up to a big ww river once and as I sat in an eddy in the first rapid, some weird dude comes bombing downriver in a suit and tie in his kayak. It turns out it was my little brother.

That one above is from the Kenai National wildlife refuge in Ak. No
W

Most portages where I travel are not signed at all. This was an exception - Whitesand falls / Dam on the Reindeer River in northern Saskatchewan. I suspect lawyers were involved. 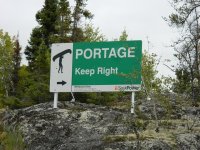 These are fairly typical throughout the Adirondacks. 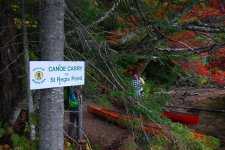 Like wjmc, most of my canoe tripping has been in areas without any signs at all, including portage signs. There was a sign on the South Nahanni River to portage around Virginia Falls. And there was this sign in the Bowron Lakes circuit, BC, that implies a portage. 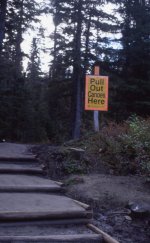 These are on the Riviere Dumoine in Quebec 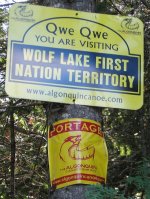 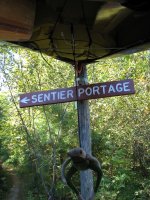 In the Adirondacks the French word "portage" is eschewed and "carry" is used instead, both as a verb and noun.

Here is the signage for the Raquette Lake to Forked Lake carry: 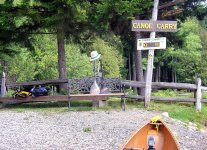 Here is the carry to the south end of Long Lake after a long road carry from Forked Lake: 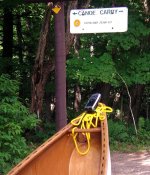 This is the carry sign above Raquette Falls, which is actually runnable by whitewater boaters experienced in class 4+. All others must carry about 1.5 miles, the first part having been compared to walking up the steps of a Big Ten football stadium. The sign isn't subtle, with a broken aluminum canoe atop it. 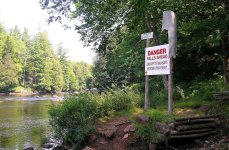 "In the Adirondacks the French word "portage" is eschewed and "carry" is used instead, both as a verb and noun."

I find this interesting. I think in Maine this is mostly the case as well. I wonder why? Do you suppose it's because of an American cultural denial of French influence in the Northeast dating back to colonial times?

There's a similar cultural 'denial' that exists within the mountain climbing world in the UK. There, the word used for descending on a rope is the German word 'abseil'... literally, down-rope, while in France the word is 'rappel', "to recall, or bring oneself back".

I think in the UK there exists a cultural enmity against the French and French culture owing to so many wars fought between them over the centuries, hence the preference for the German term in spite of having fought two world wars against Germany in modern times!! Perhaps the use of carry vs. portage is a similar example of a cultural schism?

stripperguy said:
These are fairly typical throughout the Adirondacks.

The 1st time I looked for that sign it was tough to find with all the 'No Fishing' sign the same size
You must log in or register to reply here.