Paddling parallel to keel line vs. following the gunwale line

pblanc said:
I most often paddle kneeling but whether kneeling or sitting my navel winds up being very close the the longitudinal center line of a canoe with a symmetrical water footprint. Even when sitting I am planting my forward paddle stroke in front of the widest part of the canoe. When kneeling I am planting the stroke farther forward still. So I am not facing a wider gunwale beam at the initial part of my stroke, quite the opposite. That is even more so for a canoe with a swedeform hull design.
Click to expand...

This is an excellent point for a narrow solo canoe with a centralized seating position.

I suppose I began this somewhat technical topic because the only canoe I've paddled all season is my pudgy (15' x 35") NC Bob Special from the bow seat backwards, an unusual and uncomfortable paddling position for me. It was this paddling position, with pronounced widening gunwales fore of me and narrowing gunwales aft, that made me think of the "dispute" about paddling parallel to the keel line vs. along the gunwale line, which arises mostly when soloing tandem canoes.

Historically, I mostly never faced this dispute because my daily driver flatwater solo canoe for 23 years, a Lotus Caper, has parallel gunwales all along the paddling station. So, paddling that canoe parallel to the keel line is exactly the same as paddling along the gunwale line. 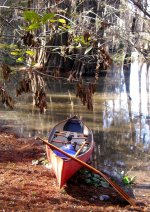 One final point about this dispute when you are situated between narrowing gunwales:

I believe the observation that following the gunwales will tend to turn you more to the off-side "because it is like a sweep stroke" is an observational illusion. I don't think it's the paddle travel along the narrowing gunwale that is enhancing the off-side yaw; rather, it's the tendency of paddlers to end their strokes with the wrong blade pitch. Paddlers who tend to turn their grip thumb slightly up while following a narrowing gunwale during the last half of the stroke will have have a blade pitch that enhances off-side yaw. For example, righty paddlers who end forward strokes with blade pitched like this, \ , will be worsening off-side yaw. They should end the stroke with (grip thumb down) blades pitched like this, /, which will reduce or even cancel the off-side yaw.

In conclusion, if two paddlers keep their blade faces at 90° to the keel line (unpitched) throughout their complete forward strokes—so blade pitch can't affect yaw—the paddler who draws along the narrowing keel line will induce slightly less off-side yaw than the paddler who draws parallel to the keel line, because paddling increasingly closer to the keel line produces less off-side yaw leverage. Whether this difference will be noticeable depends on the shape of the canoe, the seating position, and the amount of gunwale narrowing. It is noticeable to me when paddling bow backwards in the 15' x 35" Bob Special.
T

I have a similar situation since I'm nearly always paddling a Wenonah Heron tandem backwards from the bow seat with a 65lb dog sitting behind me, sticking the forward end in the air and giving the boat a whole lot of turn and terrible tracking. I usually get a bit of momentum with a couple hit & switch strokes on each side, followed by settling to an underwater recovery/correction stroke or some bastardization thereof. For easy cruising around the pond, where I'm practicing tracking straight and concentrating on form and not trying to get anywhere in particular, I find it's the least effort to stop my stroke around my hip, which deliberately avoids the question of the original OP entirely. A stronger and/or longer stroke (either following the gunnel or trying to keep parallel to the keel) exacts more yaw. I've decided that the least amount of effort per yards travelled, with my canoe that tracks terribly, is achieved by minimizing the yaw force and thereby minimizing the need for correction. Seems to me, every correction robs you of some momentum, it's just a question of degree. So the gentler the stroke, and the closer to the pivot point of the boat, the less yaw is introduced and corrected. The downside to this approach is that I never get anyway very fast. But I can track the boat pretty well and paddle on one side for a long time, at least until the wind picks up and swings the bow around! As Glenn said, 'all things being equal' is a rare occurrence indeed.

I think the distance from pivot point aspect is key - I imagine a great deal depends not only on relation to the keel line, angle of stroke, and angle of blade, but also distance from the center pivot point of the boat given its trim at the time. A steering stroke works better when extended as far forward or back as possible, so if you don't want the yaw, stay close to the pivot. At least, so it seems to me. But I have no formal training other than summer camp canoe basics and watching y'all experts on YouTube.

Tsuga, correction strokes rob you of momentum no matter what, you just feel it more when you put some power to it. I find hit and switch more efficient when I can't afford to spend energy on correction strokes.

I like a bow light trim and don't expect straight tracking. What I found is that the easier a boat veers off course the easier it is to get back on track. A straight tracking boat takes more energy to bring back in line.
You must log in or register to reply here.