Was mulling through pictures for the hell of it tonight. Came upon this old gem of Scooter and Hal in their newly bought beat to hell TW Special. Christ we thought it was the best hull one could buy for chump change! Those were root beers in our paws, honest!

I scanned some 35mm slides from the day and a bunch turned out to be canoe related. Circa 1975, me and my little brother tandem in a fiberglass solo. Old school PFD's. I called it a life preserver back then. 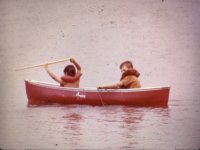 Here are some scanned slides from a solo canoe trip up the Oswegatchie River (Adirondacks) in the Spring of 1988.
https://photos.app.goo.gl/fDST4FYtGg4uFapK6

Here's a single teaser from the link

Travel days were as much about fun in the sun as camp days. Feed 'em up, keep 'em busy and wear 'em out. 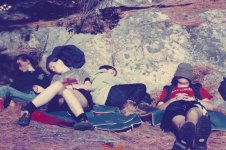 At the end of the day let the crew nap in the sun against a warm rock while Mum and Dad made camp.
Later a cooking fire and supper, with fireside stories to follow till the night sky shifted. Time slowed down with the sun, stars and season. 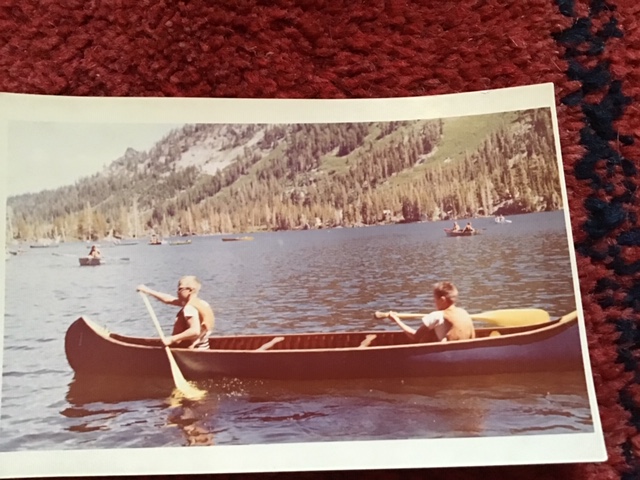 This is me in the stern, the first time I had ever been in a canoe. Hard to tell what stroke I was applying. Still working on my technique, though, after all these years. That's Danny Pascue in the bow.

I think I was about 13 at the time,1960, at Camp Harvey West, a Boy Scout camp in California. From this camp, our troop, #257, hiked to Camp Winton, also a Boy Scout camp. The hike was dubbed by the BSA as the Kit Carson Trek. I don't remember how long it was, but I think about 50 miles. At the end of one of our days, Danny arrived at camp without his pack. Scout Masters asked him where it was. Said, "I lost it." I think he was getting bored with carrying the load. Anyway, Scout Masters said, "Danny, you better go find it, or you don't eat until we get to Camp Winton."

Anyone out there have been to these camps, or hiked the trail? Would be great to have some more input to refresh my memory!

Michael
You must log in or register to reply here.