I've been dreaming of this trip all Summer !

Hoping to miss all the people, I put in at Entry pt. 33 Little Gabbro. About 8:00AM, after spending the night at the Kawishiwii camp ground, not far away.
There were only two vehicles in the parking lot, at the the Enty pt. and I was excited.

I three trip everything down the 210 rd portage. I'm not a Young Buck anymore, and tend to take too many " Comfort" things now days. So three trips.

On my last return trip, to get my canoe, Black Pearl, my lightest composite canoe, 36#, I was met by around 15 people all heading to the lake on the portage. My first thought, was there goes my campsite, I was hoping would be open. Thinking I at least had a head start on everybody, there would still be hope, as surely everyone had to make a second trip for gear and canoes. WRONG !

Met four guys coming back from the lake. I said more gear ? One said no they were just hired by the Outfitter to portage this group, and they were done. My heart sank. For sure my campsite would be taken !

I make it to the Lake, and see piles of gear, and no canoes or paddlers ! It was a race, that I had no chance of competing in ! A little down hearted, I load my gear into my canoe. I had been warned that water levels were down, and the landing at Little Gabbro was muddy. That was OK, as I had tall boots, but welcomed the info.

Pushing out into the Lake, I felt a calm ! Not worrying about the campsite, I was just happy to be in the BWCA again. This was to be a 5 day solo, as I had to be back for my Wife's Birthday.

Entering into Gabbro through a shallow channel, to my surprise ? My campsite I had hoped for was open ! The BWCA was smiling on me !

Made camp and a quick lunch, then proceeded to head out fishing, or Minnow drowning in my case. ! No luck with the Crappie or Walleye. Not even a Panhandle Northern, that day.

Wore out a lot of water trying to entice a fish with my Minnows, and a Beatle Spin.. One Pan handle was all that week that was interested. It was good to feel the tug on the line, at least once !

Did some exploring of the lake, and a spot that looked like on the Satellite photo, as a logged area. The map showed it as a slew. It was an old Beaver dam that was nearly dried up. It looked like a good spot to see a Moose.

The first night I was treated to Wolves howling. It started out like a pup, and then an older dog chimed in . The first time I'd heard wolves ! It was Cool !

As it turned out nearly all the campsites on the lake were filled that first day.

Was surprised by the number of Dogs people were bringing into the BWCA ! Mostly by young people,

One young guy stopped at my camp, and asked if he could take a picture of my map, with his cell phone ? He had lost his map. As he pulled into the landing, in a small recreational Kayak, he had a Blue Tick Coon Hound pup with him, 14 weeks old. I used to raise and hunt Blueticks, in my younger life ! We had a great talk, and swapped emails.

I don't know how he managed to keep that kayak up right with the dog and gear? He did !

The nights were cold, two below freezing and the days a little windy. I built a lot of Flare into The Pearl, of which Black Pearl is a composite copy. Had a bouncy but dry paddle.

I was to have company on my last day. Larry Ricker " Nibimocs" a good friend. As I was thinking he would not show up, as his Wife was slated to a cancer check up. I pulled camp and headed out.
It was fun time, except the portage ! Ha !.

I'm making my last trip to the parking lot, and here is Larry. He had one bag unloaded. We mulled over going to another lake, as I did not want to make that portage again !.
Deciding on going to Lake One, for a night and catch up on each others lives.

We did, but I stopped into Subway, for a footlong sub, on the way. Oh that tasted so good !

Against a stiff wind, we found a suitable campsite and got caught up on things.
Larry was going to stay a few more days, and I needed to get home.
Next year, I will go up a week earlier, and spend more time. Even though the lakes were busy for this time of year, I enjoyed every minute !

Here are a few pics. 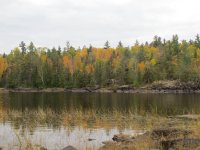 The Dan Cooke Map case. Worth it's weight in gold ! 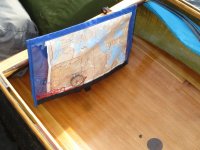 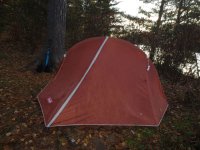 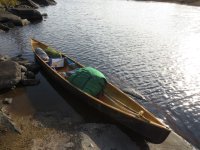 Otters had been feeding on Mussels. 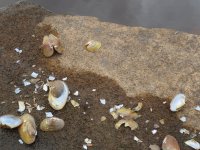 Cornmeal bannock. a favorite of mine. 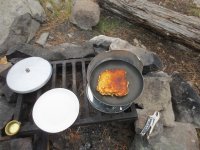 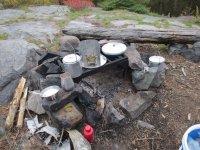 I left my mark in the BWCA. There were Moose and Wolf tracks in the rare sand beach in Gabbro. Note the Nate stick ! Oh was I happy to make and use one ! 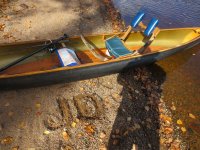 Sunset from camp as fisherman are heading back to their camp. 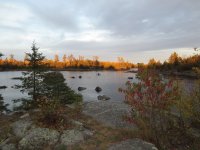 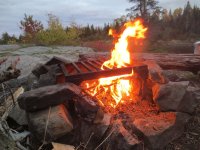 Nice trip report and photos, thanks for sharing!

Thanks for sharing Jim. Lakes are busier this fall than ever, wonder if it will change next year, assuming the pandemic panic is over.

I enjoyed this, Jim. Great to see that it worked out so well for you.

What did you get your wife for her birthday?
O

Nice report and pictures! BWCA is on my bucket list!

PaddlingPitt said:
I enjoyed this, Jim. Great to see that it worked out so well for you.

What did you get your wife for her birthday?
Click to expand...

Thanks ! My trip reports are pretty crude compared to your Fine ones ! Thanks again !

As for what I got for my wife ? I gave up a long time ago trying to get her something ! She would take everything back ! Now I just take her out to eat, at a place of her choosing, and then Schauffer her around to her favorite shopping places ! Our Birthdays are only a few days apart, so it kills two birds with one stone so to speak. We are both happy with that .

Looks like a fine trip and great photos. Thanks for posting it!

Excellent trip report and pics. I really like your canoe. Sounds like an awesome time, I am glad the weather cooperated with you.

I'm glad you got out Jim, it sounds like it was a great trip. Thanks for posting.

Sounds like a great time, wolves howling and all.

The unknown variable when planning a trip is whether your plan will work out based on campsite availability. Reading through I thought for sure that the large group that you encountered would have immediately derailed your plan and was pleased to learn that your original plan was realized. Haven’t been to the BWCA but often consider a road trip to the Boundary Waters. Enjoyed your report and pictures Jim. Thank you for sharing!

dcloots said:
The unknown variable when planning a trip is whether your plan will work out based on campsite availability. Reading through I thought for sure that the large group that you encountered would have immediately derailed your plan and was pleased to learn that your original plan was realized. Haven’t been to the BWCA but often consider a road trip to the Boundary Waters. Enjoyed your report and pictures Jim. Thank you for sharing!
Click to expand...

The BWCA was especially busy this year. To me ? I don't have a problem with other people being there. You can get away from them if you desire,
It was fun.
I'm sure you would enjoy it.

I enjoyed your trip report very much . Glad you were able to get out . Thanks for sharing .

Penns Woods said:
I enjoyed your trip report very much . Glad you were able to get out . Thanks for sharing .
Click to expand...

Thanks !
I really enjoyed the trip ! Everything fell into place.
Gotta go again next year !

Jim
You must log in or register to reply here.