New addition to the canoe barn coming next week....

Pictures and detailed description to follow after next Friday!

I know what it is, what a nice canoe, sounds like you have the fever.

Haha! I thought if anyone might know, it would be you. I’m like a kid at Christmas with anticipation.

I had a horse with the same name.

I had a tree with the same name. Good luck with it Patrick.

I would have bought that canoe if I had any re-canvassing and woodworking abilities. I guess I'll unsave it.

Glenn, my apologies if I burst your bubble!

I’m toying with the idea of a Dacron skin as long as the planking is fair as I understand that uneven planks and tack heads may show with the thinner skin. The idea is to achieve a lighter ‘traditional’ look for trips with longer carries.

Also, I may experiment with a sling style seat, like the Azland Traditions sling seat.

Patrick, you didn't burst any realistic bubble for a 15' rib & plank canoe if we are talking about the Willow, only a fantasy one, as I have no ability to canvas a canoe, do woodwork on one, or even replace the rotted gunwales on canoes I have.

In my remaining years as an old guy I would care most about light weight, not durability, so I would go with Dacron even if it shows some bumps and flaws in the wood surface. In the past two weeks I passed on two unused and great priced W/C canoes near me, in the 60-70 lb. range, simply because I have the face the reality that I can no longer hoist and move them on land anywhere close to the way I used to and need to.

I have thought about Azland saddles for years, but really don't see any advantage other than movability and removability. They cost more than the best wooden seats, which I consider to be Conk seats, and weigh as much. And they surely must sway more than a normal seat, which is not a characteristic that appeals to me. Stewart River does (or used to) sell a less expensive canvas seat, and Murat Vardar made one for himself described on his blog.

Sorry it took so long (site problems- I couldn't log on for some time), but the new canoe is finally home. It was represented as the Willow model canoe from Island Falls Canoe in Maine, which it is, but it was built by a team of students at the Woodenboat School in Brooklin, ME and presumably mentored by Jerry Stelmok, the owner of Island Falls. The canoe was apparently built over an 8 day period, and then one student chosen by lottery got to take the class built canoe home.

I am quite pleased with the canoe. It is incredibly light (especially since it comes to me without canvas and paint!) and despite being delicately built to achieve that weight, I think it will be a treat to paddle once I've finished restoring her. It has some damaged planks- not fully broken, but rather with small broken spots as if it were placed on gravel and perhaps someone walked in her while on the ground. I have not yet decided whether to replace the planks, or infuse clear epoxy into the split and damaged spots and then clamp them to restore the surfaces to a fair condition. Once plank repairs are complete I will re-canvas, possibly using #12 lightweight canvas to preserve her light overall weight. The outwales will need restoration. They currently are rough as though not having received adequate varnish. They actually seem to have been shellacked, as the finish cleans up nicely with the application of alcohol and a bit of rubbing with a cloth.

Lastly, I'm not keen on the manner in which the inwales/outwales extend beyond the decks. The extended gunwales project about 1.5" beyond the stem which does two things: one, it makes that sharp pointed delicate overhang subject to lots of abuse- clearly evident in the condition of the current gunwales. Two, it stops the brass stem band from continuing up the stem and then bending down onto the deck which is the more customary detail. This will prevent the wood from contacting the ground any time the canoe is loaded/unloaded where the stem rests (even gently) on the ground. So, I think I'm going to cut this extension off. The stem band will completely cover the junction of the inwales at the turn onto the deck, and the outwales can then be tapered and rounded to meet the stem band on each side.

I'm planning on creating some sort of sling style seat, a la Azland Traditions saddle seat or Stewart River Boatworks sling seat, in order to determine the best location for a dedicated solo seat- this canoe will never be a tandem! 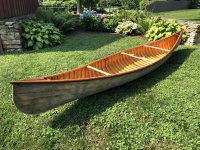 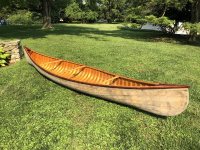 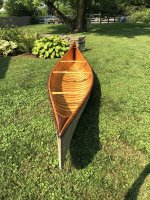 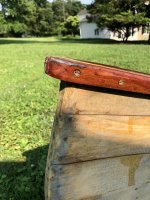 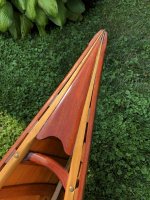 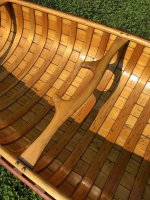 This picture shows the block to which a kneeling thwart was originally mounted- no seat. The other block is missing, as is the thwart itself. 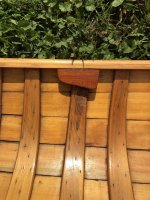 Here are several shots of the damaged planking. The gray color of the exterior planking is from the original canvas filler pigment. Some areas show the weave of the canvas skin. 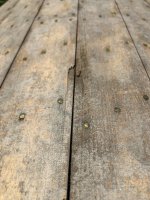 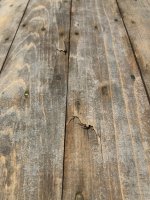 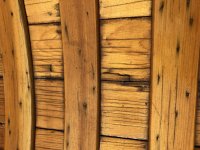 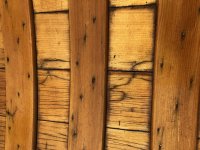 I don't like that nose overhang either because I have it on my Bell Wildfire. It collects water when the boat is upside down and is the first place the woodwork starts to rot. Plus, I agree that a rib/plank canoe should have a traditional metal stem band wrapping onto the top of the deck.

I think that boat will be a real joy to paddle and carry when restored.

I would reccommend replacing the planks. If you only need a plank or two, Roland Thurlow of Northwoods Canoe can most likely sell them to you. The gunnels are probably only treated with a sealer coat and they will have to come off for the canavasing anyway. The gunnels are designed to go past the canoe. That is the design of the EM White canoes, and he got the design from the native birch barks of the area. Usually, after everytrhing is complete, a small piece of copper or brass is tacked around the very ends to protect them. That's a beautiful canoe. Please don't cut the gunnels off.
You must log in or register to reply here.