Makoro poling in the Okavango

I've been touring around over in Africa. Our tour included a trip into the Okavango delta. Unfortunately, I was just another client on our trip, meaning our boat (makoro) was poled by a Botswanian. I hate it when somebody else drives the boat, but, that's the way the tour was set up.

Traditionally, the makoro was a dugout made from a single large tree. Now, using trees for makoros is viewed as environmentally unsustainable, and the government of Botswana mandated the people switch over to fiberglass. They make the glass boats in the traditional shape of a dugout log. The boats are roughly six meters long and roughly a bit over a half meter wide, with no thwarts. 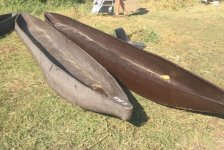 For poles, they use saplings stripped of their bark. They are not too smooth either, with burrs where the branches used to be that dug into my hands. Some are forked, and some of the forks are wired together to keep them from splitting. Some of them are wrapped with a piece of steel near the bottom, to help the poler sink the pole. Their poles were longer than the standard 12' poles we often use, and they bend a lot at the tapered top of the poles. One advantage of the forked pole is when you sweep the pole for steering purposes, it grabs more water than a single-ended pole. 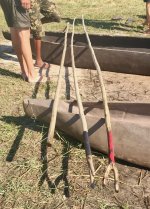 Naturally, when we got to our camping spot and unloaded the boats, I asked to borrow a pole and makoro and take it out for a spin. The Botswanians all thought this was going to be a hoot and were standing by to see me take a dip. And the boats are so narrow, I sort of expected I might oblige them. But, I guess because they are so long, the makoro was very stable. The bottoms are ironing-board flat, and I had to stand in the stern to be able to control one end. Steering is all by pole. The boats are so shapeless that leaning them doesn't engage the curvature as it does when we lean our canoes. It does help to lean them a bit, since the bow end more easily skittered across the water if I raised the leading edge. 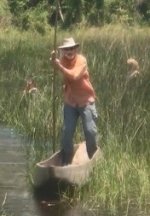 My hands are soft from a summer of paddling with gloves on. These poles were rough on my hands. After my brief excursion I felt the hands of my Botswanian poling mentor. Stiffer than leather.

The forked poles wouldn't work too well in the waters most of us pole. The bottom over there was firm sand, or grown in with roots of water sage and hippo grass. Most of the poling traces boat-width slots through the grasses, which stand up about four feet above the water. The wind was blowing, but it doesn't affect the boat much because it is nestled among the grasses.
M

Thanks for sharing this. Incredibly interesting to experience hands-on the boats, the tools, and the methods used in another place far away from home. American poler (New England?) meets Botswanian poler. How often does that ever happen?! Sounds like an amazing trip!

Since my knowledge of African countries is fixated in 1955, before half the names changed, I had to look up Botswana, which once was Bechuanaland. I was curious about this:


Chip said:
Now, using trees for makoros is viewed as environmentally unsustainable, and the government of Botswana mandated the people switch over to fiberglass.
Click to expand...

Land's sake! How many wood canoes can the Botswanans possibly make? Then I read how much of the country is desert and drought-stricken.

I was particularly interested in the Okavango Delta because it is an endorheic basin. I once had a goal of paddling as many endorheic lakes in America as possible. But then, contrary to Horace Greeley's sage advice, I foolishly went east after I had bagged only two.

Glenn MacGrady said:
I once had a goal of paddling as many endorheic lakes in America as possible.
Click to expand...

I had no idea how many endorheic lakes were in the US, and I still don't know, but there are at least 30 in California. The Okavango seemed reasonably clean and sweet water--the polers lean over, scoop it with their hands and take a drink. They must have iron constitutions, because with the herds of elephants, hippos, and other animals that are wading around the Okavango, there must be bacteria in the water. Most of the endorheic lakes I know of are salty, alkaline, and/or polluted with agricultural and industrial run-off. But, I've only read about a few, and just thought that would be the general case.

Anyhow, that was an interesting goal. Why not go back after it? But, it would take a lot of driving!

Is there a name for rivers that disappear into the ground? Are they also referred to as endorheic?

Rivers that disappear into the ground? Subterranean? Or lost? We have two. Big and Little Lost River. And a few nearby creeks are lost too. These would not be endorheic though, I think, because the flow eventually appears again (it is claimed) in the Snake river canyon.

Super neat that you got to do a little poling on the Okavango, Chip! I have fantasized about that a time or two, and it's on my list if I ever make it to Africa. Disappointing though, that they wouldn't let you do the tour in your own boat.

Amazing! Doing a safari by water in the Okavango has long been on my bucket list. Hopefully someday! Thanks for the great canoe/pole-centric report.

Steve in Idaho said:
Rivers that disappear into the ground? Subterranean? Or lost?
Click to expand...

When I lived in the Ozarks we had a creek in town called Sinkin' Creek - except during flashfloods, the water just kind of disappears into the gravel bed. But the Ozarks are highly permeable karst/limestone - the water is going down, not up. I think a hydrologist would refer to it as an ephemeral stream. Endoheric basics are defined by not draining to the ocean, and become salty because water loss is through evaporation, in contrast to 'Sinkin' Creeks' where the water seeps into the ground table, but sooner or later reaches an ocean via a river, as opposed to evaporating directly. I suppose though, in a desert one might have an endoheric stream feeding an endoheric basin?
You must log in or register to reply here.