I was being a wise guy with my camel questions @yellowcanoe, but seriously what’s a dromedary in paddlin’ parlance? A little half hearted searching on the internet was not illuminating.

I continued searching for my precious hard roller, a search which provided the impetus for cleaning up after bad bench habits.

I put dependably put tools away, sometimes before other folks are actually finished using them, and vaguely recall thinking “The roller wheel is a little epoxy damp, I’ll rest it here to dry before putting it away”

“Here” is often in one of the too many little pipette tip boxes at the back of the bench. “Too many” because I get out empty ones to hold small parts and pieces during assembly or disassembly, and those somehow end up staying on the bench to join others as an increasing number of catch all containers. “What should I do with this jizzwack? I know, toss it in this empty bin”

I know it isn’t in any of the dozen of those little plastic bins, I’ve looked, repeatedly, but a dozen little containers was way too many, and each contained a mishmash of stuff; a tarp gator clip, push pins, a long non-functional battery lantern, a box of wall anchors (that somehow also included wire nuts and a handful of spent .38 shells), a box of miscellaneous nails, a hobgoblin box of mixed bolts, nuts and washer and screws, a teeny tape measure and etc, etc, etc. And of course a lot of shop dust and debris.

That excessive collection of little plastic boxes was taking up a lot of valuable real estate at the back of the bench. With that mishmash of stuff put away properly (or tossed in the trash), I now have gobs more uncluttered workspace. Of course in 6 months half of those little bins will be back on the bench, again containing an assortment of casually tossed parts and pieces. Although now I’m running out of room in the box of boxes. 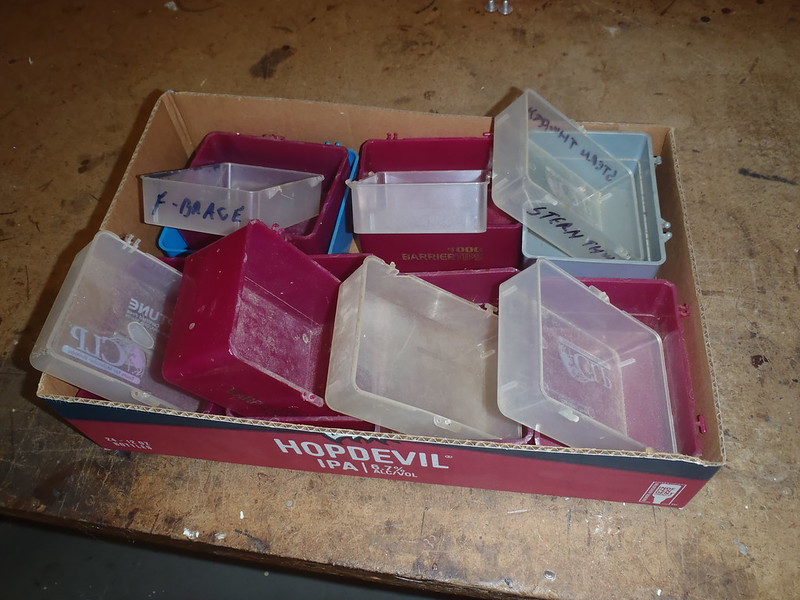 Won’t be long before I grab a couple of empties to hold new segregated hardware. And, later, random hardware bits and pieces, tossed in willy-nilly. Still didn’t find the roller. Not giving up yet, although the new one is supposed to arrive today.

The bench top is looking good, cleanest and most organized it has been in a year, maybe a couple years. If only Chip were here to see it. 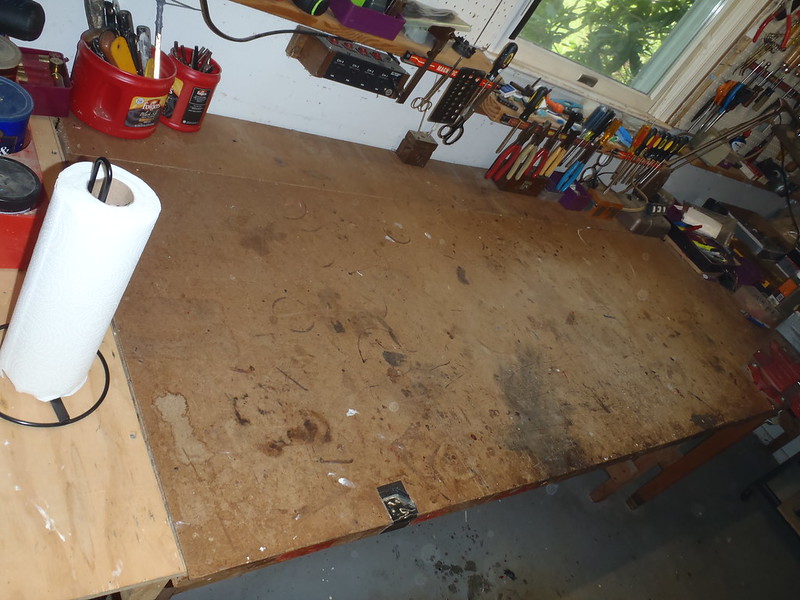 Except. . . . .there is a projecting shelf above the back of the bench for the magnet bar tool hangers. The magnet bars hold an assortment of stuff I most often want kept within easy reach while seated at the bench (and also need sorting out), hence the 6” shelf projection on a deep bench; that’s as far as I can reach. 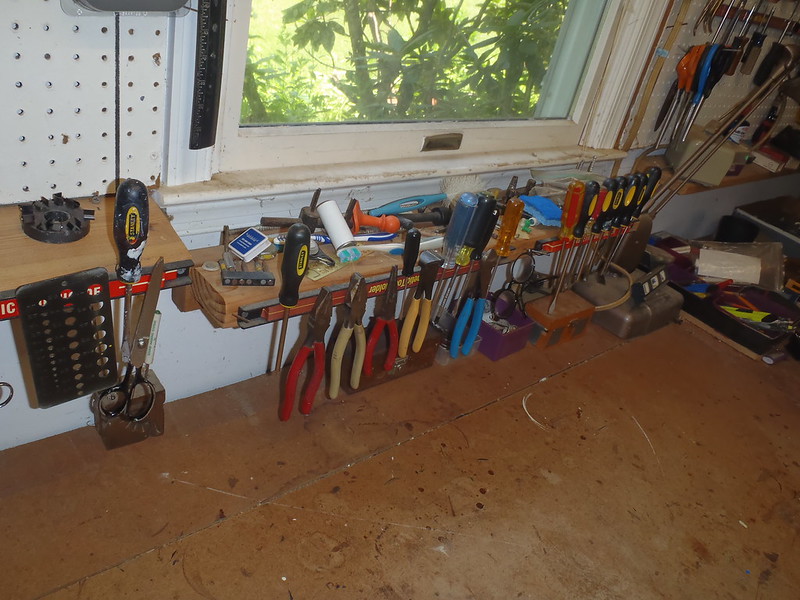 The horizontal top of that shelf is another, perhaps worse, “Just toss it there for now” receptacle. 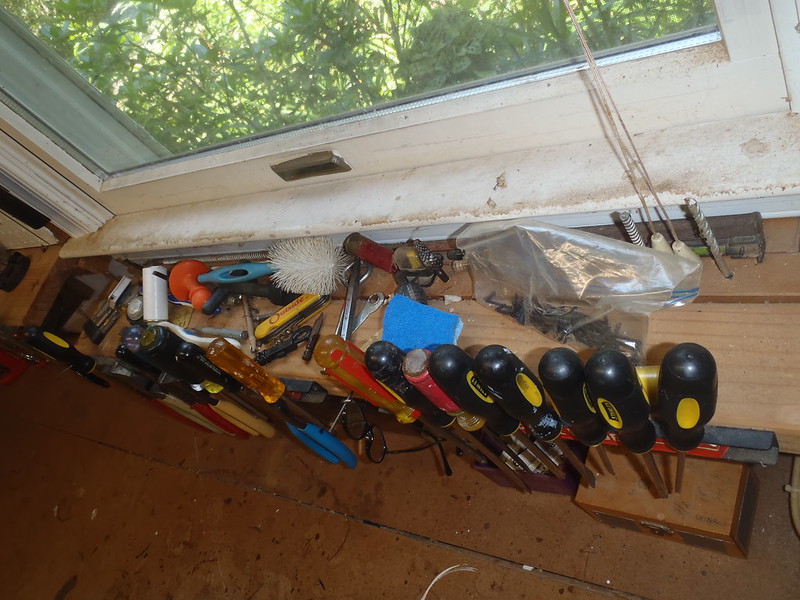 WTF is all of that mishugas, and why is it there? Anyone need a toothbrush, a12G shotgun shell, a bottle brush or half a Scotchbrite pad? 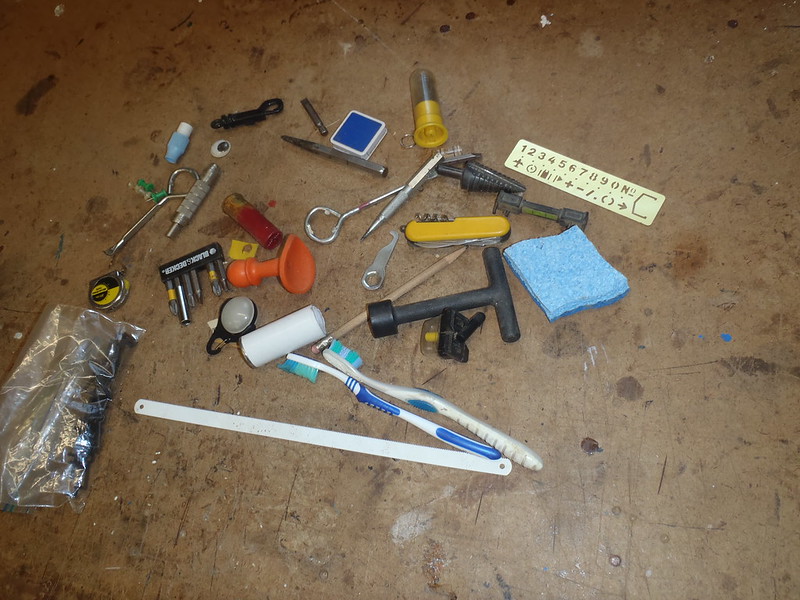 OK, it’s there because I tossed it there in a fit of laziness. Thanks to the lost tool search, more clean up and organization was in order. 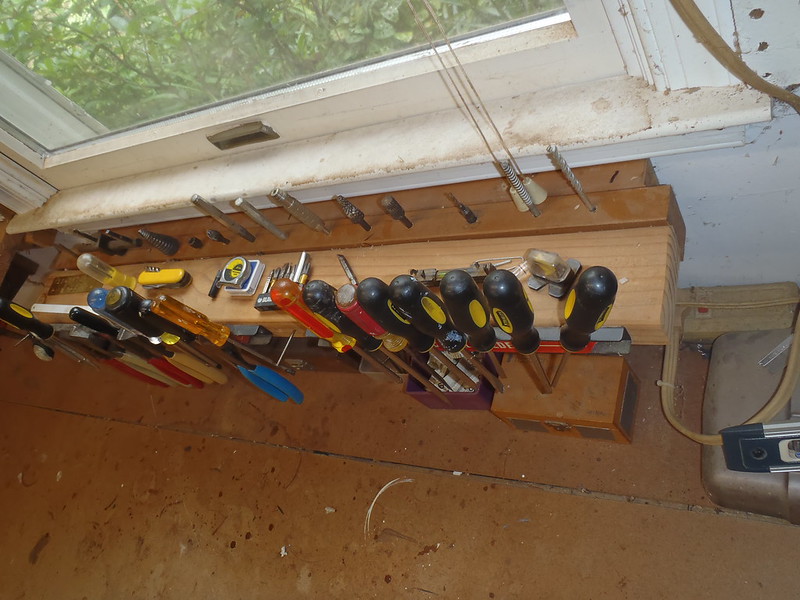 Much better. Still no lost hard roller. Oh well, the mail arrived and I now have a new one, so it’s only a matter of days ‘til I find the old one. 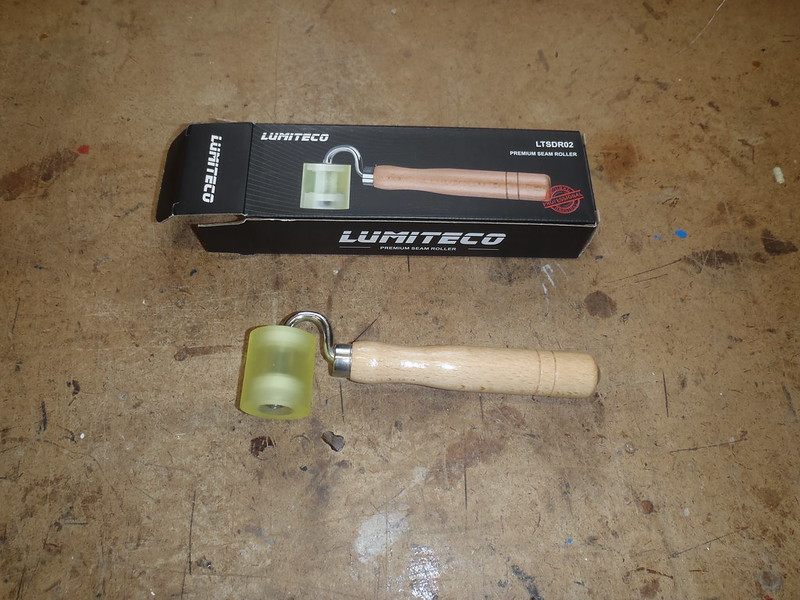 For epoxy and cloth repairs that little roller is a shop critical piece of equipment. For compressing Dynel, which wants to float on epoxy, swells like crazy and sets up wood rasp rough. For knocking down the selvage edge of fiberglass tape under peel ply. For reducing the amount of sanding needed on any epoxied fabric.

It was, in fact, a matter of “day”, not “days”. I was still kind of pseudo-searching, looking in less and less likely places, when a thought, perhaps even a faint memory, occurred. To keep dust out I store a lot of stuff in lidded Xerox paper boxes, and I kinda sorta vaguely remember pushing the roller into the FRP box without taking the lid off, just lazily pushing it through the slit in the side of the box. 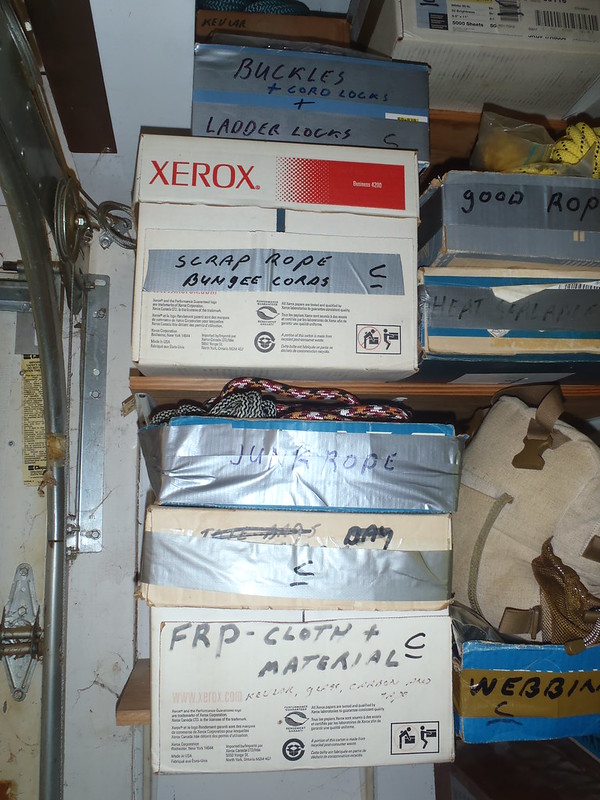 With nagging memory I wondered, did I just shove it in the next box up? 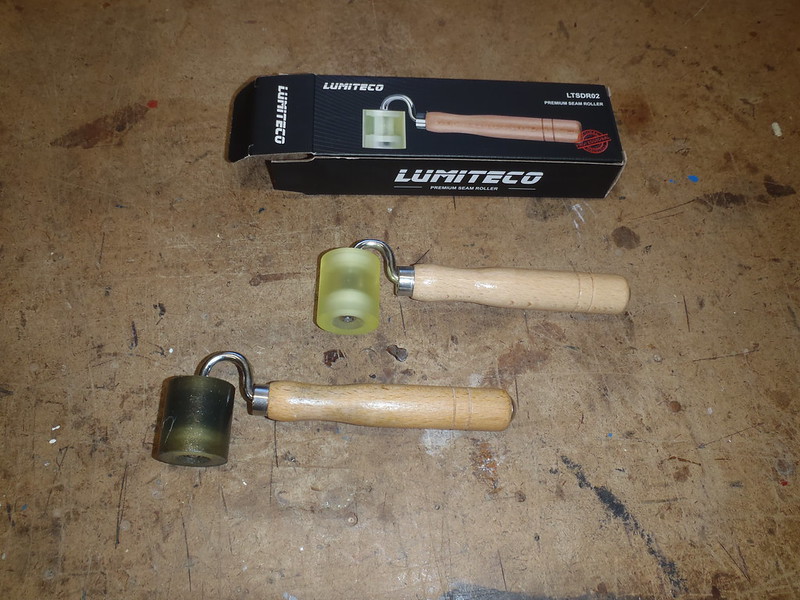 And then there were two. At least the shop is now better organized. And, having started down the reorganization road, it is hard to stop.

I did the spring cleanup of all my fasteners. They are in there by type and size. I had them in 3 different places

“I did the spring cleanup of all my fasteners. They are in there by type and size. I had them in 3 different places”

Love that 100+ cubby cabinet; what was it originally and where did you acquire it?

Thus Sweeper inspired I continued with the shop reorganization, starting with organizing fasteners (to some degree). I have segregated cans of the screws, bolts/nuts, etc that I use most often. Those needed no sorting, but a couple of the cans of oft used shortie drywall screw cans need refilling soon. 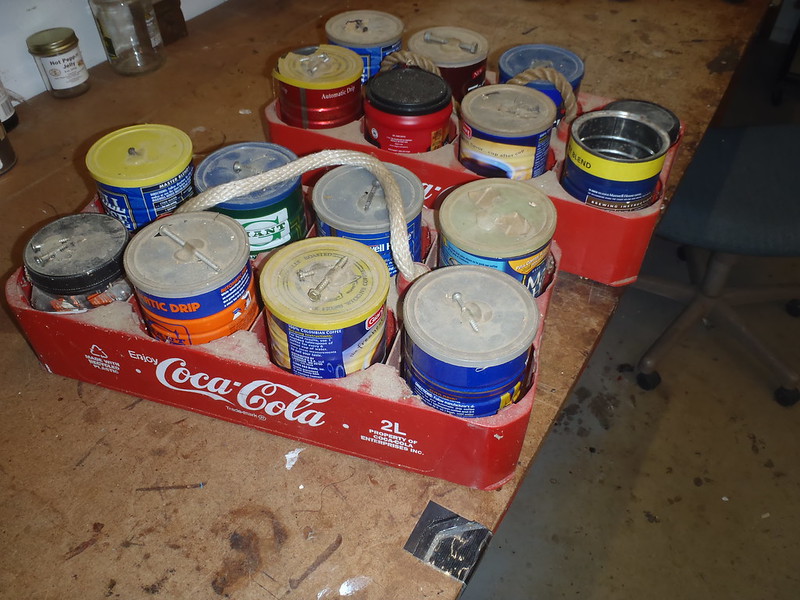 With a rope handle those 2-liter plastic soda bottle carriers are wonderful; a coffee can is a perfect fit, and a rope handle makes them easy to transport. If I am working 100 yards away from the house, or 400 miles away from home, not knowing what there awaits, those 16 cans hold most of what I might want. Lots of various drywall screws, self-tapping screws, nuts/bolts and sundry fasteners.

The stainless steel boatwork stuff is well sorted and segregated, although the boxes require occasional reorganization from random “Oh this is leftover stainless, it should go in a stainless box”. Not necessarily the correct stainless box, just tossed in the most convenient one. 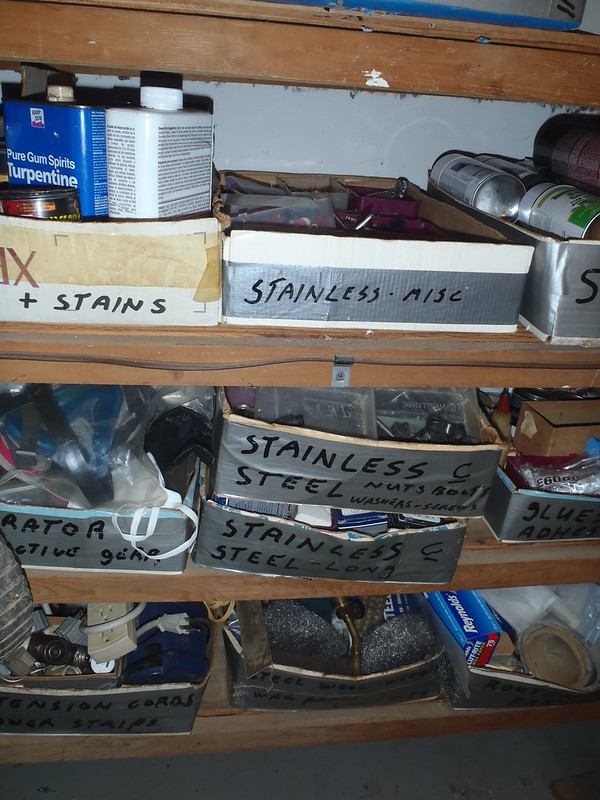 The cardboard box tops, wrapped with duct tape, have a scrap Lauan or thin plywood bottom inside for rigidity, and have proven pretty damn sturdy over the years. Pull a box off the shelf, set it on the bench, find what I need. Or, 50/50, “Nope, not that box of SS hardware, let’s try this one”.

Whatever I want or need is almost certainly in one of those SS boxes. I would hesitate to estimate the replacement cost of those three boxes of stainless, especially at today’s SS prices.

There are other bins of sorted/semi-labeled “That might be useful someday” hardware. Much of it has not been useful in any way over the past 20 years, but I know if I throw it out now next week I’ll soon be saying “Dammit, I know I had a box of galvanized fence post caps here somewhere” 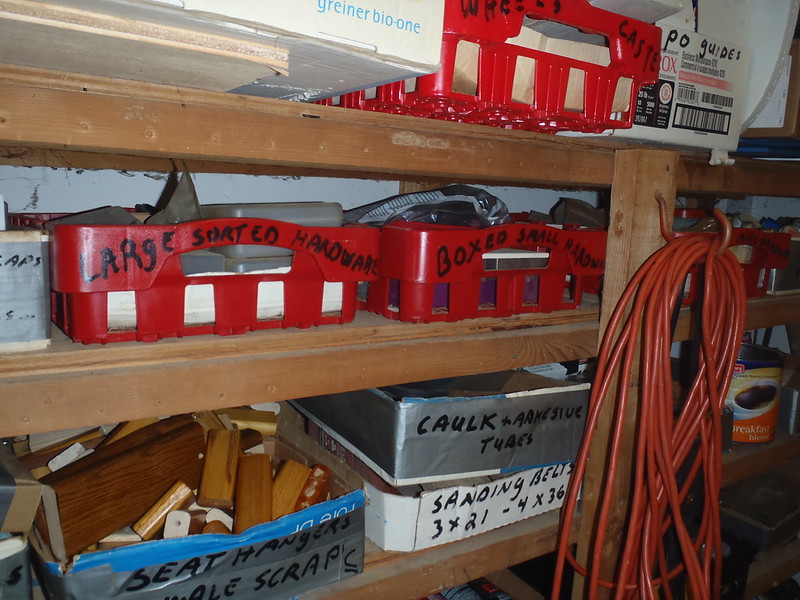 The bane, and occasional savior, of my fastener existence is the “Miscellaneous Nuts and Bolts” box. I don’t throw away viable nuts, bolts or washers . Before I discard broken stuff I disassemble it.

OK, I pick up hardware off the ground if I see a tempting piece. Doesn’t everyone? Dag fug, you may need that piece someday!

If it is some weirdo stripped or found nut, bolt or fastener, into that box it goes. Or, the usual occurrence, even if it is not that weirdo and I don’t feel like sorting it out; tossed in it goes. 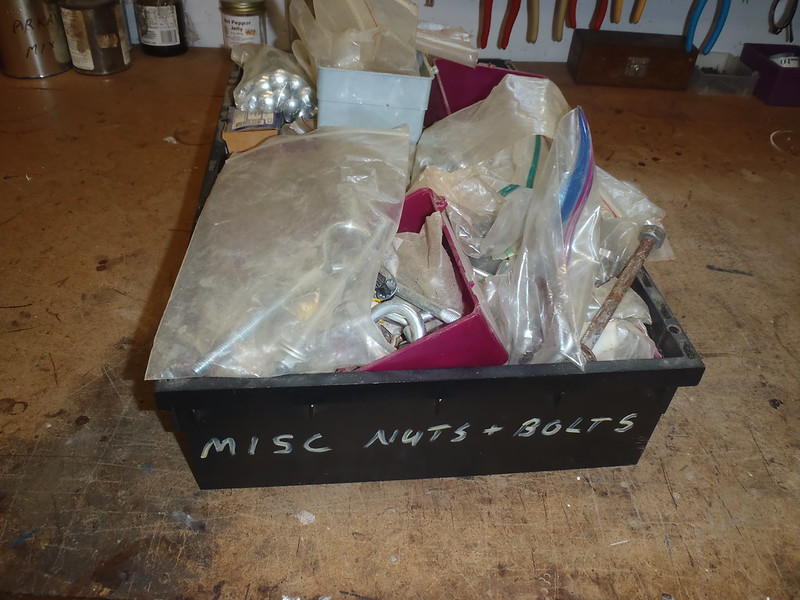 The damn box weighs nearly 50 pounds, and with the semi-sorted top layer uncovered the bedrock is a bit of everydamn imaginable thing. 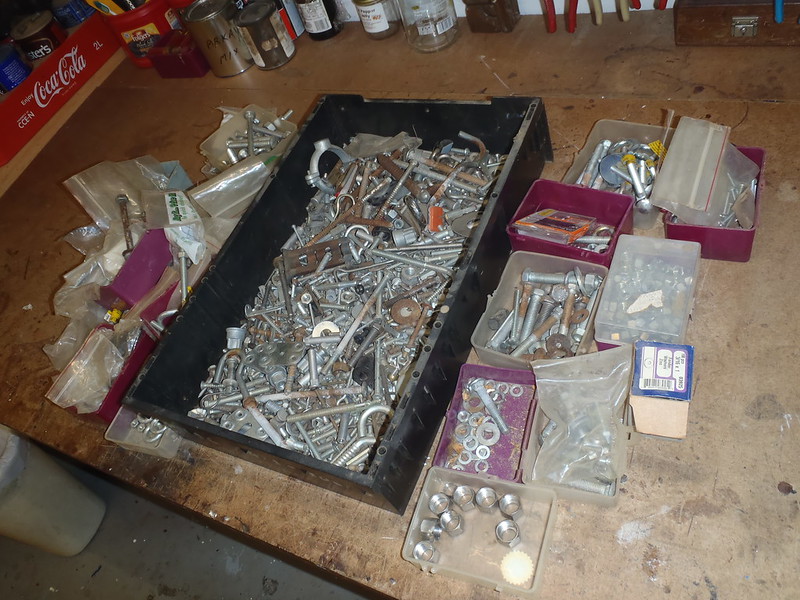 But, if I need some weirdo size, length, or oddly threaded fastener I can usually find it in that underlayer collection. It might take less time to drive to the hardware store and buy what I need than hunt-and-peck comparison search, but I detest making a hardware run just for a couple of fasteners.

And sometimes the only thing that works is some bizarro fastener from that box. “What the hell is this oddball thing?”

Five minutes of raking at the base layer later “Oh, look, there’s one just like it.” Much more satisfying than a fruitless drive to the hardware store.

I won’t claim it is now well sorted, but at least I can see the contents.

It’s either a cheap Scot’s thing, or a hoarder thing. Or a fascination with early gold/silver rush towns. Seam played out and moving on? Pull the shack down and bring the precious nails. 100+ years later lost nails still flatten tires on western dirt roads.

Or, mostly, it could simply be a desire to not go to the hardware store.

I don’t have anywhere near that much shop stuff; but a pair of cardboard soda flats fit in each drawer of my rolling Craftsman tool chest, and velveeta boxes also serve as fastener organization. The coffee cans in my garage hold lots of brass - .380acp, 9mm, .45acp, .38spl, .357mag, 44spl, .44mag, .45 Colt, 5.56mm, 7.62, .30-06, .38-55, .45-70; then there are boxes of 20, 16, and 12 gauge shells. You can see what I did with my time and money before starting a family. Now it’s dance class, what you need new shoes, oh so do you, omg all 4 of you need shoes… and aren’t those shorts too small? Why yes, yes they are. The disposable income has thusly been disposed of. With kids it never ends. They do all have their own bows and arrows though, and most of the outdoor activities don’t cost anything but gas once we’ve got the hardware.

tape measures. all the time. I have enough so that I should be able to leave at least one in every location where I'll be working, fabric in the basement, bikes in the garage and canoes in the workshop, but somehow there's never one around when I need it.

This reminds me about a tape measure I forgot that I forgot.

I bought a brand new 20' tape measure to measure a used canoe I went to see over in the Catskill Mountains about 18 months ago. After I measured the canoe, I began lifting and hefting it and talking to the owner. I decided not to buy it and drove away. Only a few days later I realized I had left the tape measure in her garage. She still has it, but I haven't had any occasion to travel to the Catskills since then.

All of which leads me to believe that if I forget about everything I have forgotten, I won't remember that I've ever forgotten anything. But I've already forgotten what my previous sentence means.

I have a neat wrench tool for taking the back off a watch...somewhere. So while on the roof staining the chimney, I put my watch in the patch utility pocket of my pants. I found my watch in the dryer, second hand running backwards. I want to open it to dry it out in rice, but can I find the tool? No. Been searching for days. Watch is likely ruined now.
You must log in or register to reply here.

Materials, parts and pieces you keep on hand in the shop?