Spent three days on Lobster Lake this last week. Surprised at the number of vehicles at the put in both on arrival and when leaving. Some may have been on the river as the lake was quiet. Shallow Bay and the beach sites were occupied when we got there Sun. as was Ogden South, but the other sites seemed to be open. Stayed at Ogden North. Toured most of the lake but didn't make it to Maxfield Brook at the bottom of the lake. The cut through at the southern end of Big Is. was about 3-4" deep. surprised we were able to stay afloat through the passage. It may be a bit better now . The dam at Seboomook was open at 600-750 CuFt Mon. and was to remain at that flow thru this Mon. the 27th. That with whatever rain thay got would help.

Have camped there a bit over the last 25 or so years but hadn't been there in the last few years. Not too sure about there being 21 sites though. Some have multiple fire rings and tables but I was only able to come up with 11 actual sites. Little Claw and Big Claw/Maxfield Brook are the most isolated, but if doing the West Branch trip can be a real slog leaving the lake if the wind comes up. Shallow Bay is private but very aptly named. Ogden North is popular but can be exposed when windy good in bug season as is Ogden South. Little cove is sheltered, but a multiple site, so you might end up with company.

All in all it's still one of the better destinations with lots of area to explore if base camping, and a great start to the West Branch trip. Roll Dam is another good start for the West Branch and an easy paddle to the lake for starters.

Saw this guy on the way in.

Beautiful day for a paddle. 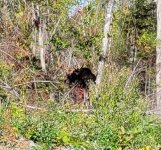 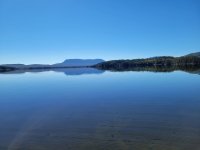 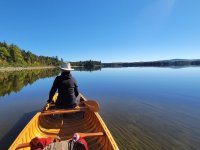 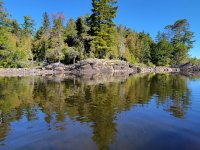 Made it thru the cut to Little Claw. 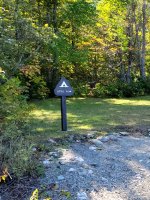 Back to Ogden North for the evening. 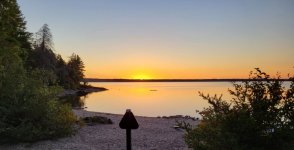 Looks like great trip and beautiful weather. Thanks for sharing.

I don't count 21 either but some of the sites are two celled.. there is also one that is in a corner sw of Boy Scout ( which is suitable for mountain goat boys!. Not the most friendly looking site). I have seen what seems to be multiple tents other years on some non marked sites and while the Ranger is patrolling , not sure they are all of one party.

This year the parking lot seemed to have more cars than on the lake. I suspect that because shuttles are not easily or cheaply available lots of folk are parking a vehicle at each end. Allagash Gateway suspended shuttles.

A late September parking lot full of pickup trucks/trailers at Lobster Trip means that there is a canoe (motored) assembly down at the Big Island salmon fishing.

Great photos! Thank you for sharing.

dcloots said:
A late September parking lot full of pickup trucks/trailers at Lobster Trip means that there is a canoe (motored) assembly down at the Big Island salmon fishing.

Great photos! Thank you for sharing.
Click to expand...

Great stuff. It's been a while since we've been to Lobster...maybe it's time.
You must log in or register to reply here.