Interpreting the CTN logo picture, plus some history of it

While the site was down for the migration from vBulletin to Xenforo plus customization for a week at the end of August 2021, I gave a lot of thought and effort to what I wanted to do, if anything, with the site logo/picture.

Originally, the site had a picture of Willis Brown's canoe, which carried over to Robin's tenure as administrator. Robin tried a few different logos and pictures over the years, ending up with the black & white pencil sketched paddler with a logo inscribed on birchbark. This B&W pencil sketch continued on through the administrative tenures of dougd and DaveO, so I decided I would stay with it as being sort of an established tradition.

However, I thought the pencil sketch was a little too monochromatic, washed out and lacking in contrast. Here it is, as it was:

I wanted to make it "pop" more, and to be more compatible with the multiple color themes I was planning for the site. So, I played with my long-expired Picasa photo editor and found that I could colorize the birch bark logo and add contrast while retaining the black and white character of the paddler. I also rounded the corners of the picture, reduced its vertical height a bit, put a thin white border around the photo, and embedded it all in a rectangular black frame that would be compatible with the four site color themes I had in mind. And that's what's now atop the site.

But then my wife asked a question. What's going on with that once-white birch bark that makes it now red, orange, yellow and white—while the paddler is in a black & white landscape? She wanted an interpretive explanation. A story.

I have three interpretations (the first being my wife's):

1. It is fall. The leaves on the trees are a brilliant red, orange and yellow. A beautiful orange-red sunset is filtering through the leaves and colorizing the birch bark. The canoeist then goes out for a moonlight paddle.

2. The canoeist has used the birch bark as tinder to start a camp fire, and the red, orange, yellow and white flames are licking around it. The canoeist then goes out for a moonlight paddle.

3. The canoeist is a girl. About 12 years old. Her name is Dorothy. And she is paddling from the Kansas of vBulletin toward the Oz of Xenforo.
A

Three is the one that made me laugh and laughter is always good, so I'll vote for number three.

It's funny how our eyes/brain get get accustomed to things. I used to be big into photography and did a fair amount of editing (both in the darkroom and digitally). I was never that great with it but I was often surprised, after edits, to look back at the original image and see how striking the difference was. Oftentimes I was originally very happy with the original and sometimes didn't even know if it needed any editing. Once the editing was done I questioned how I could have thought the original was good enough.

Oh the sun is rising and Robin is in his Chestnut fully equipped to hunt . He might not be back afore nightfall so he has his tent and cot and stove and kit. None of those are small but in hunting season it's good to be prepared.
His Robertson would make a fine hunting canoe and there is room for a deer

Yup, you did a nice job there Glenn, looks good. I remember you labeled one of my headers as "ambiguous", hell, I had to look that word up on Google, and then I had to agree with you.

Robin must have implemented the pencil sketch header on May 3, 2016, because THIS THREAD talks about it, and reminds us that the previous header was a rotation of three pictures, none of which I remember.

Earlier than that, on June 14, 2014, Robin introduced a header of a canoeist in a misty, grassy lake with the slogan, "A Place for Open Canoes". Someone observed that the horizon was tilted. I played with Picasa and straightened the horizon, but that made the words tilted. Robin then had his IT guy fix it up. For old times sake, here is part of that header with my straightening attempt.

Personally, I like everything about the original logo, but have no problem with any of the changes to it. After first joining the group, I didn't think that it depicted anyone in particular. However, after I watched Robin's videos, a connection to the logo was made for me, confirming my thought that the logo is a great representation of the both the group and of canoe camping. I particularly like the pencil sketch (with or without the changes), as opposed to a photo. I think the pencil sketch better reflects the tradition of canoe camping. I would be remiss if I did not acknowledge the wealth of information that is on this site. I have only sampled it and over the next couple of months I plan to systematically go through the site and "farm" that information for reference when needed. Thanks in advance to all of you that have shared your wisdom, experience and expertise.

I spent many hours creating and experimenting with dozens of differently colorized versions of the pencil sketch. At one time, I was thinking of having a differently colored pencil sketch header for each of the four different site color themes—black/gray, brown, green, blue—that I was imagining. At that point, however, I had long run out CTN money for the site migration and other necessary customizations and was into my own money. So, to save IT costs, I re-opened the site with one site color theme (blue) and settled on the one colorized header we now have as being reasonably compatible with future site color themes (which we now have).

Just to preserve some behind-the-scenes migration history, if only for myself, here are a few of the other colorization efforts of the header.

Actually, tuning the header turned out to be one of the least laborious and costly of the behind-the-scenes migration customizations, as well as probably being the most enjoyable. Manually moving over 800 threads into different or new forums, and manually sending out over 400 emails, was prodigiously tedious and time consuming.
P

I like the logo just fine, but it has always seemed odd to see a guy paddling from the aft deck.

I have a new appreciation for the header. At the top of my phone screen, it is about 1/2” x 1/8” and I hadn’t really noticed the the orange side was birch bark. Thank you for your work migrating the site over, I know these things take a lot of work. Rugerforum.com has finally upgraded, fixing myriad problems of the old dying format.
Last edited: Jan 18, 2022

it has always seemed odd to see a guy paddling from the aft deck
Click to expand...

I've always assumed there might be a moose or something spread throughout the remainder of the canoe to trim it properly.
A

A photo from PG Downes of a group of Chipewyans he met on a canoe trip in the 1930's: 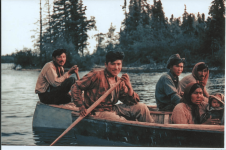 I like the changes you made Glenn. I would be disappointed if you changed it to something different.

Everyone in the bow get out!!! Would take me a nanosecond to fall in.
You must log in or register to reply here.