I believe the HIN on my current rebuild project pre-dates the current standardized format of a 12 letter/number sequence. Modern HINs consist of:

A five character code than can use numbers and letters to denote the manufacturer assigned serial number/hull designation.

A letter and number denoting the month of certification

For example, the HIN on our Mad River Malecite reads MAD18180L203

This is the HIN on the current rebuild, DRM 1684 110, inscribed below the inwale amidships: 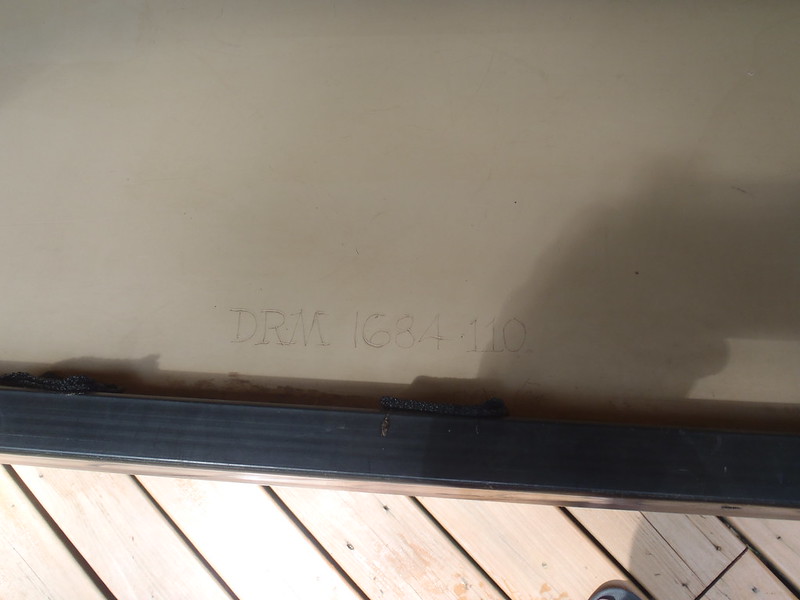 It is the only HIN anywhere on the canoe and all of the characters are distinct, with nothing faded or missing. DRM = the Dreamboat Company, but the rest is a mystery. This is a very old Royalex canoe; I first rebuild it from a derelict at least 25 years ago.

I vaguely recall that before the now current 12 character HIN sequence was codified there were alternative sequences that indicated similar build information, and would like to determine the year of manufacture.

Anyone know how to interpret older HINs?
P

Prior to November of 1972 there was no requirement for hulls to be certified with the US Coast Guard using hull identification numbers. Manufacturers often did apply serial numbers to boats but these numbers were unique to each manufacturer and followed no uniform format(s) so they really shouldn't be called HINs.

Since November 1, 1972 all hulls sold in the US required a 12 character HIN to be applied to the boat and registered with the US Coast Guard. Some makers would append additional letters to the end of the 12 character HIN following a dash. For example, Mad River appended a (-K) to the end of the HIN for their Kevlar models and "-KH" for their Kevlar hybrid (Kevlar Airex) models. But this is not part of the HIN registered with the US Coast Guard.

Three different formats have been used. The last four characters of the HIN denote the month and year of certification and in some instances the model year for which the boat was intended to be offered for sale. But these four characters do not necessarily include a letter. In one format used between 1972 and August of 1984, the so-called "straight year" format had only four numbers. The first two numbers were "01" through "12" and denoted the month of production and the next two numbers the year of production. In an alternative format used during the same time period called the "model year" format, the ninth character of the HIN was always the letter "M". The next two characters were numbers indicating the model year. The last character was always a letter indicating the month of production starting with "A" for August, "B" for September, and so on.

The current format in use since August 1, 1984 uses a letter and number as the ninth and tenth characters of the HIN and denote the month and year of certification (production) but the letter code for the month of production is completely different. Now "A" denotes January, "B" February, and so on. In this current format the eleventh and twelfth characters of the HIN are always numbers which denote the model year. The model year may be the same year as that of production but is very often the year following production.

As for the boat in question, if the number is indeed complete it is not an HIN because it does not have 12 characters. Makers sometimes did apply numbers to hulls that had no relationship whatsoever to the actual HIN. For example, Blue Hole Canoe usually applied a model code and a serial number on a brass plate affixed to the bow deck plate. But they also had an HIN and the numbers on the brass plate and those on the HIN had no relationship to each other whatsoever.

It may be that the "84" in the etched number refers to the year of production. But if that is the case, the hull would also have been required to have a proper HIN since all hulls sold in the US after November 1972 had to have them.

There is no trace of another HIN anywhere on the hull, inside or out, not even old pop rivet holes from a missing HIN tag on the stems.

I’m going to guess that Dreamboat, who I suspect bought naked RX hulls from some manufacturer and installed gunwales, seats and brightwork, messed up.

Since the eventual reservoir permit application requires a HIN I’ll have another engraved dog collar tag made, incorporating the existing characters plus two more.

This time I’ll try to pop rivet it on right side up.
You must log in or register to reply here.