After a bungled attempt at a Northern Maine canoe trip in September (due to a distressed vehicle situation on the Golden Road), I needed to venture out again before the snow starts flying. I loaded up the new adventure wagon October 8th and headed out to the Downeast Lakes region with a put in at Sysladobsis Lake. The other vehicle is still perched quietly at Daves Automotive Services in Greenville, ME with two fully cracked and twisted control arms claimed by a washed out culvert. The rust on the underside of the vehicle made for a situation where the Armada needed to be laid to rest so hence the new truck.

On September 8th I drove to Spruce Lodge on Sysladobsis Lake where Randy the owner allowed me to park my vehicle safely for the duration of my trip. There was a $5 / per day fee which I gladly paid. I launched at the public boat launch just a bit up the road from Spruce Lodge and set out on my way. The wind was light and everything was lining up perfectly for a great weekend trip...including the weather forecast. My target was Cranberry Cove for my first nights campsite. This campsite did not disappoint. The campsite is tucked neatly in a deep water cover with an amazing beach perfect for landing the canoe and for swimming. The meal for the first night was baked potatoe, steak tips with a homemade seasoned rub that I prepared in advance at home (Thyme, oregano, pepper, garlic powder, and onion salt). Sauteed onions also blessed the plate and I was in heaven. The evening skies were brilliant and I was actually looking forward to drifting off to sleep at this amazing spot. Very quiet considering once the sun set I could see plenty of cottage lights on across the way. There was not a peep from any of those spotted cottages.

Day 2 - woke up and enjoyed a hash brown, scrambled egg and english muffin breakfast with coffee and I was on my way. I loaded the canoe and set off for Pocumcus Narrows campsite. I was targeting the Dennison portage on Sysladobsis Lake for entry into Pocumcus Narrows and I eventually came upon it. It is a short very manageable groomed portage which made portaging a breeze. The portage was quiet when I arrived and made my first carry, however, on the second carry with the canoe all hell broke loose. 5 side by sides and 3 suburbans converged at the dam all at once and I was pleased to leave that area as quickly as possible. These folk were going to have a BBQ at the portage campsite and I am sure that they were going to have a good time. Once I arrived at Pocumcus Narrows campsite I realized it wasn't right for me. The site was already dark and cold since it sits on the Eastern side of the narrows and is heavily wooded. I decided to move on hoping to enjoy the remainder of the sun on this amazing day and camp at Flood Cove on Pocumcus Lake which has a Western exposure. I realized this could be a gamble by passing up a vacant campsite hoping for something warmer and sunnier but it all paid off. I bumped into another paddling group where one of the individuals was delivering newly purchased fire pit grills from Lowes to the campsites that they intended to visit. Our discussion was lengthy. This group was a paddling group of 5. One of the individuals had a Wood Canvas homebuilt canoe that I admired and I shared that my canoe was also homebuilt. Anyway, the conversation ended and the grille hand off occurred as I was guaranteed that Flood Cove campsite was not occupied.

I reached Flood Cove campsite which is a tricky campsite. Not a lot of flat ground but perfect for hammocks. I did find a suitable tent area. I delivered the grill but did not use the grill. I had shaved steak with me that I had hoped to make Steak, Cheese, mushroom and onion calzones on Naan Bread, but I had forgot to bring the mushrooms and the cheese. I decided to go with a freeze dried Chicken Teriyaki meal out of a pouch (Never had one of them before). I was pleasantly surprised with how tasty the actual freeze dried meal tasted. I enjoyed a brilliant sunset, caught up on some reading (Mike Elliots - This Old Canoe) in preparation for my Chestnut Chum Canoe restoration, enjoyed a campfire and then drifted off to sleep once again.

Day 3 - Having thought that this trip would take me approx 4 days I realized that today would be the last day. However, I almost made it a 4 day trip by missing Junior Stream. I departed flood cove and just kept paddling. Well, I entirely missed Junior Stream and paddled to the Northern tip of Pocumcus Lake with wind at my back. When I arrived at a very small inlet I realized I had screwed up big time. It was at this time that I actually referenced my GPS and offline maps and realized my mistake. All in all I lost about 4 hours with this detour, but the hard part would be paddling back to Junior Stream after I set a waypoint on my Garmin Inreach Explorer against a much stronger wind that had been building all day. Just prior to reaching Junior Stream I heard quite a ruckus coming from a cabin on my starboard side. There was quite a bit of noise including AC/DC music cranking "Back in Black" and several partying. As I passed by the camp I used my paddle as an air guitar and rocked out with them on my passage. I don't think they were expecting this, but they did get a kick out of it. Eventually I make it to Junior Stream which is a boulder field in certain sections and come out on Junior Lake. Wind had picked up significantly and Bottle Island which is at the mouth of Bottle Lake Stream was visible in the distance. This was one of those paddles where the island just would never get any closer after paddling for what seemed like forever, but I eventually made it and traversed Bottle Lake Stream to the heavily developed Bottle Lake and take out which can be found behind an old boathouse. This boat house is referenced as a "Grey" boat house in the book "Quiet Water Maine" but for those that would consider this trip please note that the boat house is now "Blue". Behind the boat house is a very shallow muddy take out which required some tough footing but all in all a great takeout for this particular trip. Once I had my canoe on shore I walked back to Spruce Lodge (approx 1/2 mile), grabbed my truck and drove back to the takeout.

It was a much needed trip and proved to be quite enjoyable. Encountered the paddling group on Junior Bay and the motorized regiment at the Dennison Portage but that was it for 3 days. I would do it again.

Here is a video link of the trip:

Great report and pics, thanks for sharing

That sounds like a good time. Missing that turn just made for more time on the water, not a bad thing. Nice pics too.

Nice trip, glad you where able to get out again. Your video link took me to a ring ceremony for state champions in baseball. I watched the trip from a video link from FB

That's great that you where studing up on the Chum restoration on a canoe trip.

Robin said:
Nice trip, glad you where able to get out again. Your video link took me to a ring ceremony for state champions in baseball. I watched the trip from a video link from FB

That's great that you where studing up on the Chum restoration on a canoe trip.
Click to expand...

Robin, Looks like I made a faux pas by adding the wrong video link. Sorry about that. I just edited the post and added the correct video link.

It was great to get out there on the water again after an extremely busy summer with family and obligations. The downeast area was amazing and yes the trip provided some downtime for extra reading. Looking forward to the Chestnut Chum restoration this winter and the anticipation to use the chum next season is building. Thanks for watching Robin. All the best!
Last edited: Oct 18, 2021

Great report and video. Is that your Wabnaki now painted red? She looks sharp. The Fall colors are looking beautiful.

Patrick Corry said:
Great report and video. Is that your Wabnaki now painted red? She looks sharp. The Fall colors are looking beautiful.
Click to expand...

Patrick, yes it is the same Wabnaki that received a new coat of red. I originally had always wanted to add color but stayed more inline with the traditional all wood appearance, but I felt something was missing. This past March with the canoe back in the shop I applied two coats of Rustoleum Topside primer and 3 coats of Rustoleum Topside "Bright Red" paint. I was very pleased how the browns, natural white cedar (knotty) and the red all blend together. The canoe glided quite nicely on this past trip. This was actually the first time the Wabnaki had touched water after the new coat of red. Thanks for watching.

That is a fun area. I lauched from Ellesmere Landing and made my way to Scraggly through Junior several years ago. On my way back I investigated that port between Pocumcus and Sysladobsis.. No one there but it vibed party spot. Is there still an old sunk boiler there?

yellowcanoe said:
That is a fun area. I lauched from Ellesmere Landing and made my way to Scraggly through Junior several years ago. On my way back I investigated that port between Pocumcus and Sysladobsis.. No one there but it vibed party spot. Is there still an old sunk boiler there?
Click to expand...

The boiler was installed to run the pumps for the lock that used to exist at the dam, to lift the tan-bark steamer between Pocumcus and Sysladobsis. The boat, called the H.L. Drake, collected hemlock bark along the lakes for use in the leather tannery in Grand Lake Stream. 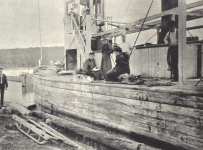 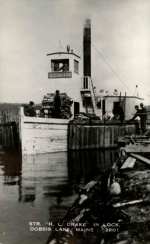 dcloots said:
The old sunken boiler / boiler stack was still there. I believe I read that the sunken boiler stack existed from one of the threads on this forum. Is it possible that it was your post from way back?
Click to expand...

Could be. I think I posted a pic.. from way back! Golly it seems like yesterday. That's what happens when you get old.

Paddler123 that is a terrific old pic. Thanks for sharing it!

Paddler123 thanks for sharing that piece of history. Amazing bit of history!

I bumped into the paddling group that I had mentioned in my report and something that one individual said that touched me was, “We are paddling waters that have been paddled for 10,000 years by the indigenous people. Additionally we are celebrating them by paddling the same waters on Indigenous Peoples Day weekend”. That will give you something to think about…..and while thinking about it and it blew me away realizing the history involved with the Downeast Lakes Waters.

dcloots said:
“We are paddling waters that have been paddled for 10,000 years by the indigenous people.
Click to expand...

If you ever get a chance to do the carry around Grand Pitch on the E Branch Penobscot, check out the part that goes over the granite to see how it is worn.
You must log in or register to reply here.

4 days at a small lake in northern Maine