I came across this canoe a couple weeks ago. I am always on the lookout for a cheap Kruger facsimile and since they only had photos of the cockpit and it was only $50 (with car topping kit and a short paddle for my kid), I snatched it up without much thought. The owners knew nothing of its origins.

I am sure the young family that was selling it was happy to get it out of their lives. It is not a stable recreational boat. The fiberglass seats are at gunwale height and the fairly narrow hull and round chines makes it rather tippy if you are sitting. Couple that with the 18 inches of space for the front paddler and the large amount of rocker and it is the least family friendly canoe I could imagine.

It is 15 feet long, 30 inches wide, and has about 12 inches bottom of hull to top of gunnel. The hull is roughly symmetrical with flat sides that roll into the deck once you get past the chines and bulbous bow and stern. Simply, it looks like a giant eggplant. The layup is fiberglass and firm, roughly 60-70 lbs.

Outfitting is odd. The seats are molded fiberglass but appear to be swept into the gunnel at some point after purchase. Whoever originally owned it was very comfortable with fiberglass work. There are at least eight significant sized patches. They appeared to struggle with keeping the seats in place as they were reinforced multiple times. I have a hard time imagining people kneeling since the seat support and minimal height could easily trap an ankle. I also can't imagine the bow paddler sitting comfortably with legs forward in any position. There is expanding foam in both ends and two brackets glassed in at the center likely for lashing down gear.

My best guess for maker is that it might be Hyperform as it has a similar glassed in wood keelson as Mike McCrea's Optima and appears to have dyed nylon under all the paint. Other than that I don't have a clue. I can find old racing canoes with two small round cockpits but nothing designed for rivers with a single open cockpit and nothing with this combination of deck, volume, and length.

I've only tried it on flat water but it paddles alright. It can track okay when under power with a moderate J. Turns quick with a bow draw. It might be the only boat I have paddled which can flip around backwards and maintain momentum and continue in a glide.

I would love ideas of its origin and suggestions for outfitting once I tear out the seats. Right now, I am thinking of a solo saddle or high kayak style seat for single blade. Might make an okay fishing boat, support boat, or at least with end bags could carry a man and a cooler through class II+. I am not confident as to its abilities as a tandem, despite the length. 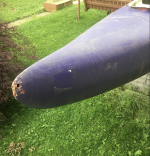 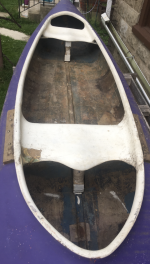 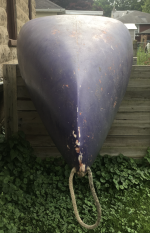 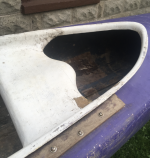 It looks like a well rockered kneeler of some sort.

Hyperform produced Lettmann designs under license in the US, and the internal keelson sure looks like a Hyperform/Lettmann feature.

It could be some Hyperform downriver or slalom tandem, or an imported German-made Lettmann.

Lettmann is still in business; maybe send them an e-mail with some photos.

If you find out what it is please let us know.
A

Mike McCrea said:
Lettmann is still in business; maybe send them an e-mail with some photos.
Click to expand...

I might give that a try. I still have to get it on the river, see how it handles as a solo. I am unlikely to find anyone that will paddle it comfortably as a tandem.
You must log in or register to reply here.

Definitely not another Explorer!

Just got a Mad River Monarch