I learned to canoe in high school in 1968. I went canoeing regularly until 1992. I was proficient in whitewater and flat water. I bought a new canoe (Old Town Discovery 119) this month. I took it out to a local lake to check out the canoe and myself. I swamped getting into the canoe. Once I was in the canoe, I was fine and surprised that I remembered the different paddle strokes. I paddled all around the lake. I saw Loons and Bald Eagles When I got back to the landing, I swamped again getting out of the canoe. I guess I forgot how to get in and out of the canoe. Any suggestions of how to get into and out of the canoe without swamping? Any recommendations of a book or video? This is embarrassing.

Don't be embarrassed. Getting wet is part of canoeing. Everyone has gone for an unscheduled swim at least once. It was just your turn is all.
Keeping yourself low, steady and centred is key when entering and exiting a canoe. Here are a couple of vids that might help.
https://www.youtube.com/watch?v=EHsyrbFNnpc
https://www.youtube.com/watch?v=6xRWA9S0LEM
Relax, be patient, and welcome back to canoeing!
Last edited: May 12, 2020
G

two basic mistakes I see a lot when entering and exiting--#1 having the thin bow or stern touching the shore making a narrow pivot point. you should have the canoe broadside to the shore. #2 always step in the middle of the canoe and never brace yourself with your hands on just one gunnel-use both rt and left.

If you are still unsteady or uncomfortable after trying the method in Odysseys video above you may want to consider a bigger boat.

Turtle is correct, never "bridge" one end of the canoe on shore with an air gap underneath before the other end gets supported by water. This is also true when loading gear into the canoe. Not only is this a very unstable condition, it is very bad for the canoe structure when it is not completely supported in the water. Resign yourself to a wet foot entry in almost all cases. I like the young ladies' method better than the other video. You can't beat a solid seated stable brace on the canoe deck while the other person enters a tandem canoe. I see the bow lady, after she is seated, used her paddle as a brace to keep the canoe stable for the stern entry. Hard to tell, but it looks like she did it correctly by bracing in deep water and did not abrade her paddle by sticking the paddle tip in the sand or dirt bottom.

When solo and the shoreline permits, canoe parallel to shore entry is almost always better unless you have firm footing on a solid bottom in shallow water where you can stand and float the canoe. If entering or exiting a relatively narrow or solo canoe with a parallel to shore entry, I will often place my paddle with hands wide across the gunwales, and if the canoe tends to tip in any direction, I let it tip toward shore with the paddle blade acting as a gentle stabilizing brace on the shore as I step in or out one foot at a time.

Alternatively, I often may do a direct to sit entry by backing up perpendicular to the gunwale and just gently(!) lower my butt onto the seat. then with hands wide on the gunwales I swing my legs in. But unless I control how much I lean backwards without sufficiently weighting my legs, this is a risky move. How many times have I leaned too far back and rolled all the way out on the other side. Only once at a deep water beaver dam.

Dramey you are not a beginner again.. Getting wet on exit and entry is so common!

Try to remember that your head placement is most important. Head goes in first over the boat then the body follows. Getting in kneeling is the most stable but not for everyone. Head is last out of the boat on exiting.

Underway head stays inside the boundaries of the gunwales.

I admit to flinging my feet over the sides on disembarkation but sometimes I don't get my feet under me and over I go.. And sometimes I pull the gunwale over too far and over goes my partner too. And never too happy.
P

Land canoes parallel to shore. Visualize the center line of the boat and always put your weight there.
G

Dramey, as I have gotten older, heavier, less agile, and my knees have gotten crappier, getting out of the canoe has again become an adventure, sometimes in wetness. Getting in is usually not a problem; getting out, especially with dead legs at an awkward landing, is a different story.

I rarely kneel and do not care for higher mounted seats, but by golly they are easier for me to get out of than something low slung.

As suggested above I try to find an easy landing spot and put the canoe in the shallows sideways. On a kindly bottom I will come in at a perpendicular angle at some speed and drive the canoe sideways into the shallows. Yeah, yeah, not “approved” and scorned as bottom abuse, and I won’t do that with fragile composite hulls, but with RX or thick poly (Disco 119) or even old-school stiff glass, I will. I’d rather scratch the bottom and exit dry.

Especially if I’ve been in the boat for a few hours and have lost my “land legs”. At least I’ll only fall out in 3 inches of water.

More assistedly I also have a couple of “crutches”. I mostly use a carbon double blade, and I’m not abusing that as a landing crutch. But I also bring a substantial straight wood paddle, and do abuse it jammed in the river bottom to help stabilize the canoe, and me, as I get out. Or, sometimes, depending on the awkwardness involved, when getting in.

I’m a big fan of the three point stance, two feet, one “crutch” firmly planted. Or, more specifically, a fan of a minimal two-point-stance, one foot solid, one foot moving, one crutch planted aiding my balance.

The other, most oft used crutch is a short push pole. Not a 12 foot long setting pole, but a 5 ½ foot tall closet rod pole with a ducksbill at the top. 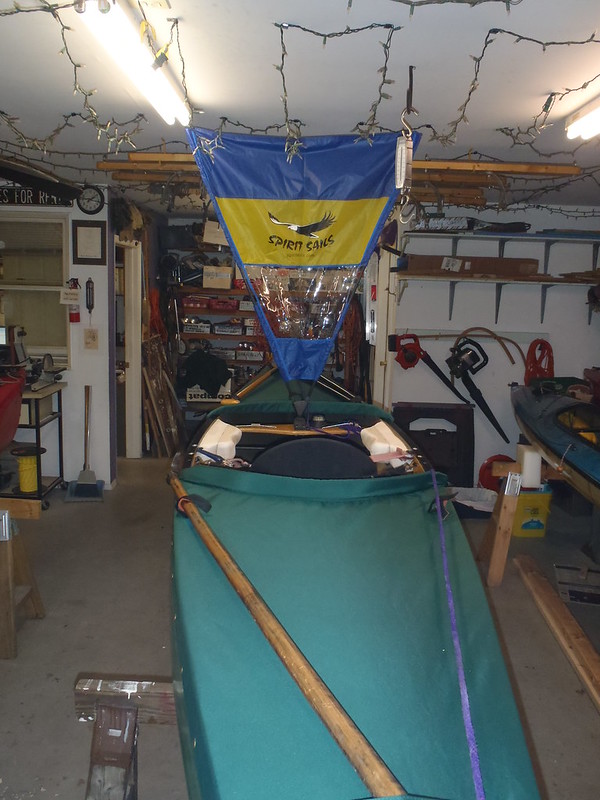 Same exit technique as egads abusing a paddle blade stuck in the bottom, but long enough that I can stand fully upright with it, ‘til my knees start to function again. Or I can bridge it pressed across the gunwales, with the far end resting on a bank. This kind of kayaker exit, something I would never do with a decent paddle. No one should.

That pole comes in multi-functional handy. Hiking staff. Spare tarp pole. Short push pole on shallow gravel bars or sandbars where there is not enough water for a paddle blade. The L-shaped “ducksbill” at the top is handy for snagging things just out of reach, or hooking on a friend’s gunwale when muckling up afloat.

We have a variety of short “push poles”, in different lengths, diameters, ducksbill/tee grips and foot ends, including marsh mud bottoms. 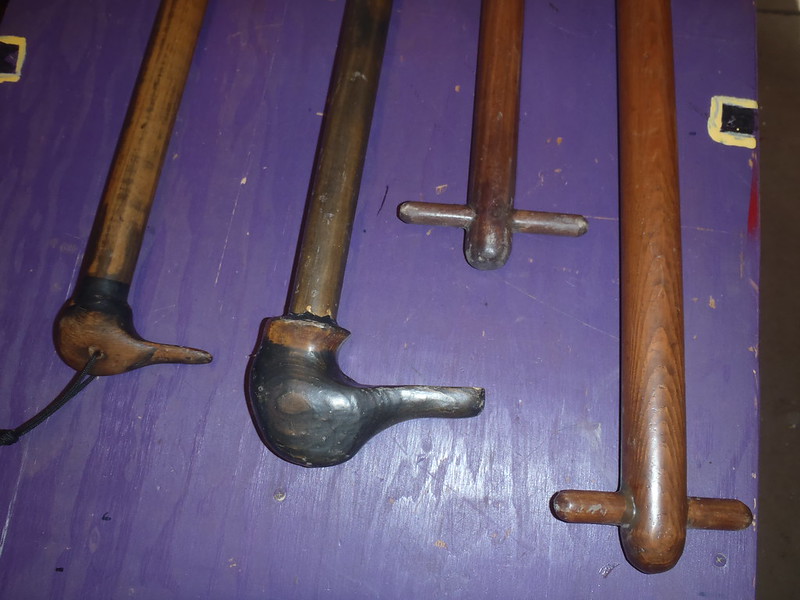 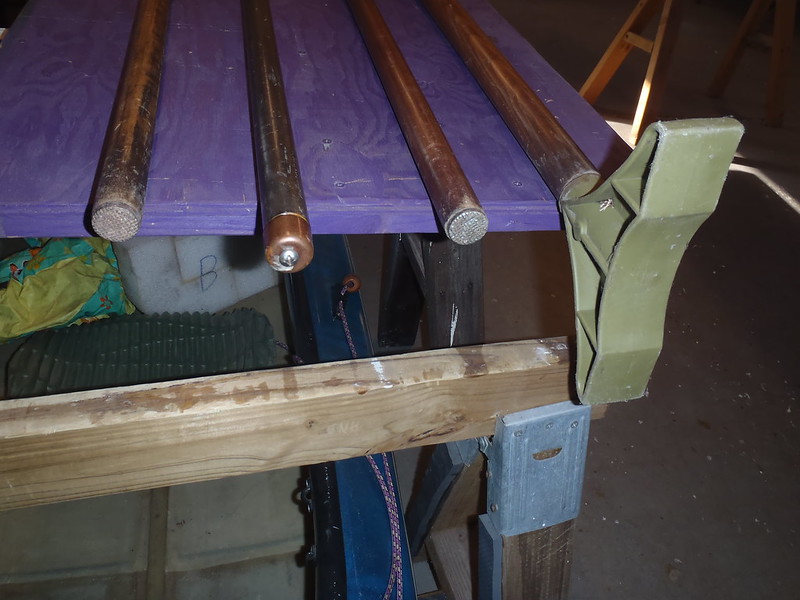 One of those simple things comes on every trip, and gets used every time, in the boat and in camp.

Thank you everybody. In reading all of the different posts, I believe I have discovered my problem. I had the bow of the canoe on shore as I was getting in or out of the canoe. I will find out for sure tomorrow when I go back to the lake to canoe some more.

Yes, as mentioned earlier, bridging a canoe partially on shore with an air gap underneath is often a result of trying too hard to maintain dry feet, laziness or ignorance. It is just one of the sins most often committed by my BSA and wilderness leader guide students, especially when loading gear. When you go tomorrow, try it. Prop one end up high on shore with the other end in the water. Without getting in, manually rock one gunwale side to side to see for yourself how unstable that configuration is.

dramey,
I fell out of my first canoe the first time I had it in the water. The water was 34 degrees and I had no PFD but I did have a heavy winter coat and work boots and pockets full of tools. That was a near death experience but guess what? I never fell out of THAT canoe again.
You must log in or register to reply here.