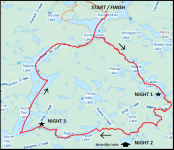 ​
This trip is another example of everything Algonquin has to offer. The trip begins and ends on some particularly large lakes in the NW corner of the park, namely Kiosk, North Tea, and Manitou lakes. In between you will experience paddling and portaging upstream on the very scenic Maple Creek, through Maple Lake to Erables Lake, then downstream on the alder choked Raven and Birchcliffe creeks. The reward for all of your past and future hard work is to spend at least one night at the Birchcliffe Cabin. This two-bedroom piece of paradise is well worth the slog in and out and should be added to every young adventurer’s bucket list for Algonquin Park.

Once you leave Birchcliffe Lake you will spend 5-10 hours fighting your way down Birchcliffe Creek, then it is a day and a half of large open lakes from Biggar Lake back to the access point on Kiosk Lake.

To lower the difficulty level of this trip the number of Days and Nights can be increased. This will allow for more room for error when dealing with large bodies of water (and possible wind bound days) and alder choked creeks. There was substantial blow down on most of the portages in the Spring of 2019, but we were starting our trip only days after the official ice out date. All of the portages were single carried and are the most difficult at the beginning of the trip when travelling up Maple Creek. Depending on water levels, the travel from Erables to Biggar can range from sluggish to nearly impossible, so make sure to check with the Park prior to heading out. 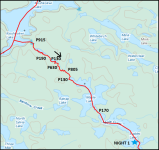 ​
This section is quite enjoyable, and the views are excellent. Since you are moving upstream the portages are mostly uphill, with the P630 to P805 section being the hardest and steepest of the bunch. If the loop is performed in a clockwise direction the portage weight will be fairly high, so some care will be needed in the steeper sections. I would recommend getting an early start to the day, as the wind coming out of the western arm of Kiosk can make the crossing of the lake more difficult. If the wind is prevailing, you will get a nice tailwind while travelling on Maple and Erables to finish off your day. This loop was completed on a very cold May weekend, shortly after ice out so the rangers had not cleared any of the portages. Every portage had some form of blowdown, but with luck we did not need to get the saws out. If this trip were to be attempted in the fall, especially during the peak colour change, the experience of this section would be breathtaking. Make sure to watch for side trails on the portages, there is a clearing with some pretty interesting farm and camp remnants. Old cans, bed frames, buckets and assorted metal objects can be easily located. There are various excellent campsites on Maple Lake, and we highly recommend the South campsite on the southern most island on Erables. This campsite is protected from the wind (which came in handy during a very cold night in 2019) and is perfectly situated to give you an early start on the lower section of Maple Creek. You will need all the rest you can get on night one! 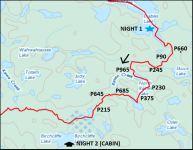 ​
This section of Maple Creek is vastly different from the section north of Maple Lake. Going is quite easy and scenic up until you reach the 245 meter portage. After this portage there are several more narrow sections of the creek, and the alder starts to become an issue. Make sure to have a saw at the ready for at least the next day and a half, you will need it. The P245 is actually several hundred meters further west from where it is marked on the map, and you will need to pull over a beaver dam or two on your way to the 965 meter portage. For most of the afternoon you will be portaging mostly uphill on steep little portages, with beautiful little lakes to enjoy and catch your breath on. There are several campsites on all of these lakes, but there was one on the north shore of Coral-Root lake that looked quite nice. Make sure to check the map and poke around at the camp remnants, there is one at the end of Raven Creek with an old anvil. Several beaver dam pull overs later and you will finally make it to Birchcliffe Lake and will be rewarded with your own piece of paradise. We only stayed one night at the cabin, and with arriving late and leaving early the next morning we definitely regretted not booking two nights. Due to the hardship to get to this lake from all directions we can’t imagine having your solitude interrupted in any way while enjoying the spacious two bedroom cabin. The cabin itself was in fairly good shape, standard wood stone and small front porch. No mice were experienced either, possibly due to the fact that we were so early in the season. We did find several dead crows in the stove though, which is a fairly common occurrence in our experience. This is the perfect spot to rest up, get warm, and prepare yourself mentally and physically for the next day’s struggle.

​
Depending on water levels and creek maintenance, this could be one of the longest and hardest days you could imagine in Algonquin Park. We woke up to a chilly day with rain in the forecast and we definitely though we were prepared for what was to come. You start by back tracking up the entrance into Birchliffe, and then head west down Birchcliffe Creek. The going is easy at first, but this was only a false sense of hope. In the spring of 2019 the water levels were very high, and we had been warned several times on the forums and again at the permit office that very little maintenance had been done on this route. We would like to take this time to take credit for an entire days worth of creek maintenance on this particular route. We entered the creek at 0900 and did not exit into Biggar Lake until 1900. It was 10 hours of crawling along the creek, sawing continuously to make meters of forward progress. At some point the sky opened up and the rain persisted until long after we went to sleep. Several hundred meters before the single campsite on the creek we had a boat get caught up in the alder after coming over a beaver dam, which caused the boat to flip and dump the single occupant. After a quick change of clothes, some jumping jacks for blood flow, we grudgingly headed back to the boats for more punishment. It is days like this, when moral is low, that are the real test of character and perseverance. When we arrived at Biggar Lake the sense of relief and accomplishment shared with the group did manage to pull us together, and give us the motivation to push on. We were very behind schedule, as we were supposed to be leaving the park the next day, so the decision was made to push on into the evening as far as we could to make up ground. Biggar Lake is very nice, with high rising hills and would warrant a revisit some day. The several short portages are not very difficult, with whale’s back take outs and beautiful falls to glance at while walking by. We imagined that the fishing was excellent at the bottom of each portage, however we did not have the time, daylight, or energy to test this theory. We passed quite a few campsites and every one of them had curious faces lit up by cozy fires staring out from under their tarps as two canoe slipped back quietly in the night. By the light of our GPS screen we managed to get one of the campsites in the narrows leading into North Tea Lake. To this day, and long into the future, this day will be remembered and discussed amongst the group. 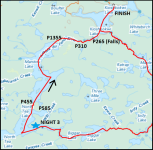 ​
The final day of your trip, whether you are behind schedule on North Tea or on schedule on Manitou, will be a day of paddling on big open water. We were very lucky and managed to have a strong tailwind, but even paddling with the wind was precarious with the large white capped waves coming over the stern. North Tea and Manitou are massive with plenty of campsites dotting the shorelines. Some nice campsites to note are the final large island in the north end of North Tea, several nice island campsites on the northern half of Manitou, as well as a few nice beach campsites on the north western shore of Manitou. We tend to be very big fans of big rocky points, island campsites that are western facing, and any campsite connected to beachfront property. There are two portages from North Tea into Manitou, and we elected to take the 455m option. This is a very steep climb up and into Manitou and with the scenic waterfall on the 585m this portage choice was likely the wrong one. In nicer weather, we would suggest the 585m , at least you could climb into the waterfall to cool off. We island hopped our way up Manitou, noted some nice campsites, and tried to keep water under the boat and not in it. The 1355m portage into Kiosk is fairly long, but it is downhill and not overly difficult. This portage starts on a nice spacious beach that we landed on while being very relieved to be off the water. As you make your way down the Amable du Fond River toward Kiosk you will pass multiple water falls and short downhill portages with clear evidence of people setting up camp for fishing purposes. We will definitely be back in this area for some trout fishing from the various campsites situated perfectly below prime fishing holes. Once you are back on Kiosk make sure to watch our for the multitude of “dead heads” in the sourthern section. Like most areas in the north end of Algonquin the evidence of historic logging is always prevalent. We found paddling back to the cars much easier on the way out. With our strong tailwind still present and with a good angle from the rock formation in the middle of the lake, we shot our way out of the Park. Waiting at the access point dock, in rubber boots and rain jackets, were a couple of game wardens. This was the first time we have seen them in the park and we quickly explained that we barely had time to fish on our recent debacle. The access point was fairly busy with what appeared to be trout fishermen, so we quickly loaded up and started the five and a half hour drive home. 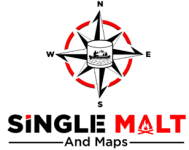 Nice. in 1973 we went from canoe lake to joe, up the otter slides to kiosk, kiosk to bret in one day, back to canoue lake. in 9 days. That was fun.

Manitou said:
Nice. in 1973 we went from canoe lake to joe, up the otter slides to kiosk, kiosk to bret in one day, back to canoue lake. in 9 days. That was fun.
Click to expand...

That sounds like a sweet adventure. We have toyed with the idea of the Brent Run from Canoe to Brent and back, but I think we would rather go a little slower and enjoy that route some haha. From Canoe to Brent covers some of my favourite lakes and campsites in the Park.
You must log in or register to reply here.