The local Canadian chapter of the Wooden Canoe Heritage Association is collaborating with the Muskoka Discovery & Steamship Centre to provide programming for National Canoe Day here in Canada. The event will run from 10am - 4pm with plenty of displays, programming and demonstrations. If weather / lake conditions permit, the plan is to do a paddling flotilla and tour of Gravenhurst Bay at 3pm. If you're in the area, feel free to stop by for fun day celebrating the canoe! 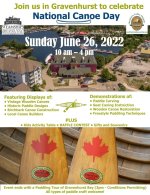 Here is the agenda for the upcoming Canoe Day Celebrations. Hope some of the local Canoetripping.net members can swing by...

10:00 am :
Official Event Start & Water Blessing Ceremony
The day's festivities begin with a talk and Blessing of the Waters ceremony by Indigenous Elder and author, John C. Payette, member of the Wiikwemkoong Unceded Territory (Manitoulin Island)

Presentation of restored Peterborough Courting Canoe (Ron Riddell)
This year's National Canoe Day at the Muskoka Discovery Centre celebrates the "Courting Canoe", a special class of wooden boat constructed for stylish leisure and affairs of the heart. These canoes were most often designed with seats facing each other and often were accessorized with pillows, picnicking supplies, lanterns, and parasols. Volunteers at Heritage Boatworks have been working to restore a 100+ year old, all-wood courting canoe, a Peterborough Comfort. Join us for the back story behind this fascinating watercraft and its restoration back to life.

11:00 am :
Seat Caning Demonstration (Ongoing through the day)
Volunteers from the Wooden Canoe Heritage Association will be on-hand to demonstrate the techniques of restoring old canoe seats using natural cane. Learn about weaving patterns, techniques and get your questions answered with additional resources available for those who wish to try seat-caning at home.

Paddle Carving (Ongoing through the day)
An ongoing demonstration of the basic skills and tools needed for making a canoe paddle. Volunteers from the Wooden Canoe Heritage Association will be on hand to illustrate techniques and answer your questions. Resources regarding different paddle shapes and wood choice selections will be available for those interested in learning more.

12:00 noon
Freestyle Canoeing Demonstration (Lee Benson)
Freestyle canoeing involves a combination of simple strokes, plus momentum, angle, and heel to control a canoe and make something even more artful than its parts. Watch from shore as paddler Lee Benson performs a 5 minute in-water musical performance followed by a visual demonstration and explanation of the concepts of freestyle paddling.

1:45 pm
Seminar Presentation - Romance of the Paddle (Murat Vardar)
Join us indoors for a presentation on the history of giving carved canoe paddles as romantic betrothal gifts. This 30 minute talk will discuss three surviving betrothal paddles dating from the mid-1800s that are highly ornamented and historically significant.

3:00 pm
Canoe Flotilla & Guided Tour of Gravenhurst Bay
The public is encouraged to join in the on-water fun as our flotilla of boats leave the Discovery Centre area and paddles along the waterfront of Muskoka Wharf. All types of watercraft are welcome. A further guided tour of Gravenhurst bay will highlight some of the features from Gravenhurst's past, including the spot of Camp 20, the WW2 Prisoner's of War Camp in operation from 1940-1946.

Here's a report from the National Canoe Day event in Gravenhurst, Ontario. Volunteers at Heritage Boatworks workshop had been working on restoring a vintage courting canoe in the museum's collection. These canoes were most often designed with seats facing each other and often were accessorised with pillows, picnicking supplies, lanterns, and record players to set a romantic mood on the water. 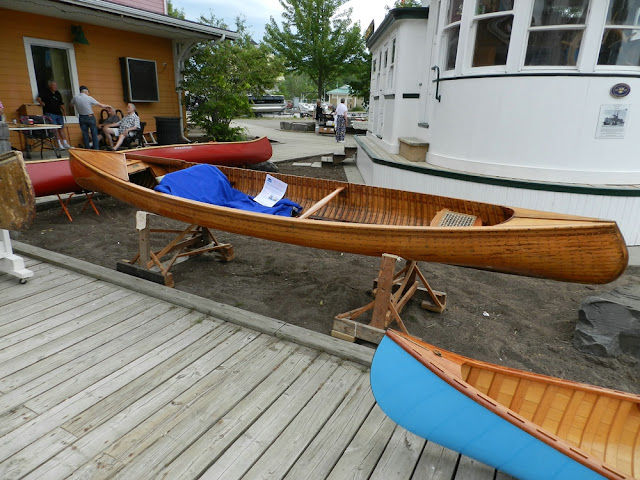 This courting canoe is a Peterborough no. 44, a longitudinal strip canoe (16' x 31" x 12") produced by the factory between 1909-1930. This varnished cedar model seems to have been built with added options including a torpedo style deck with storage compartment underneath as well as a hole for a mast sail. The canoe was, at one time, owned and utilized by guests of one of the largest resorts in the region, the famed Bigwin Inn on Lake of Bays. Later in the day, the canoe was paddled with Gravenhurst Ward 1 Councillor, Penny Varney, serving as the "wooed lady" while dressed in period clothing and protecting herself from the sun with a colourful parasol. 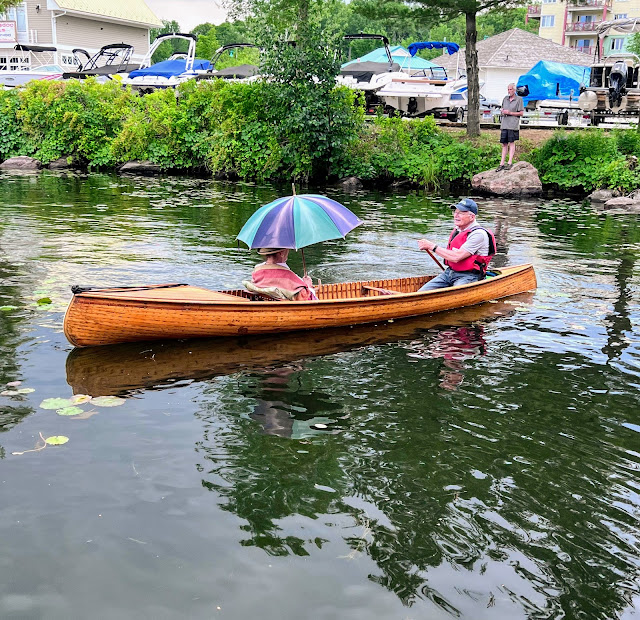 By the time our group was all setup we had a dozen canoes on display around the front courtyard. These included a century old birchbark, as well as new builds and restored cedar-canvas hulls. Very eye-catching was a modern cedar-strip sailing canoe all rigged up. 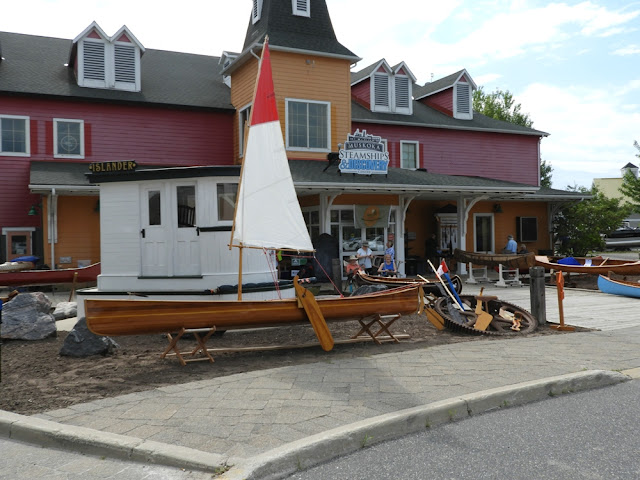 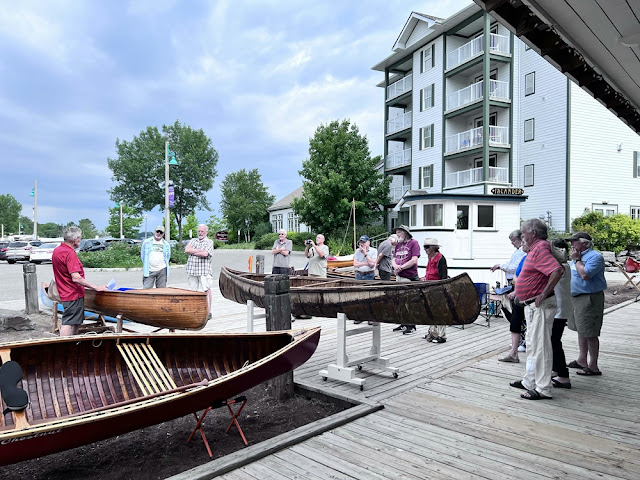 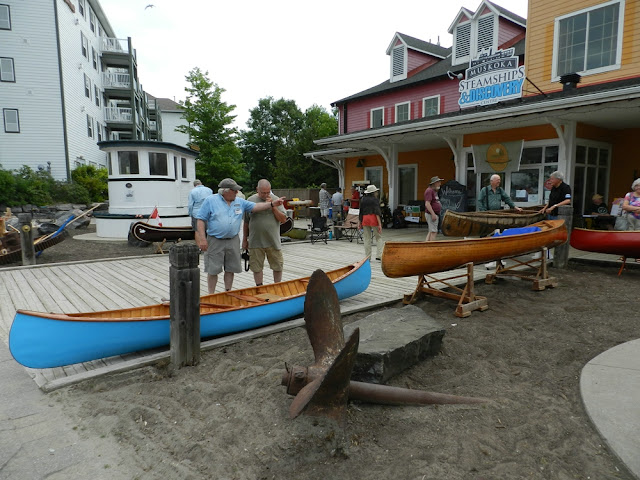 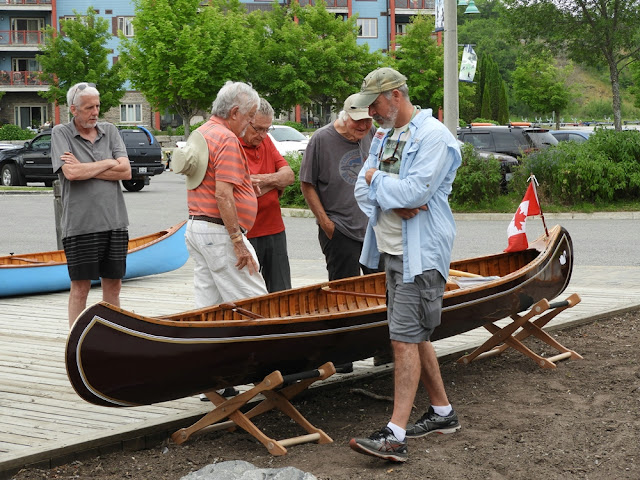 I had brought along my restored 14' Chestnut Playmate and traditional tripping gear... 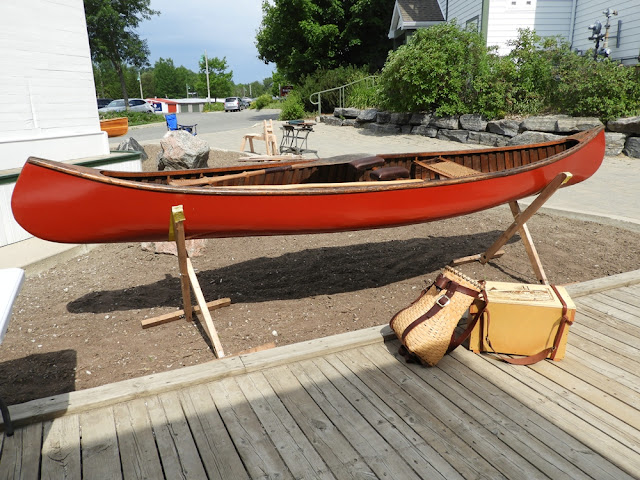 In comparison, popular YouTuber, CamperChristina, brought along her brand new carbon-kevlar H20 canoe weighing in at just 28 lbs! Christina was kind enough to allow folks to try an lift this beautiful feather up for portaging and also permitted another paddler to test the canoe during an in-water demonstration. 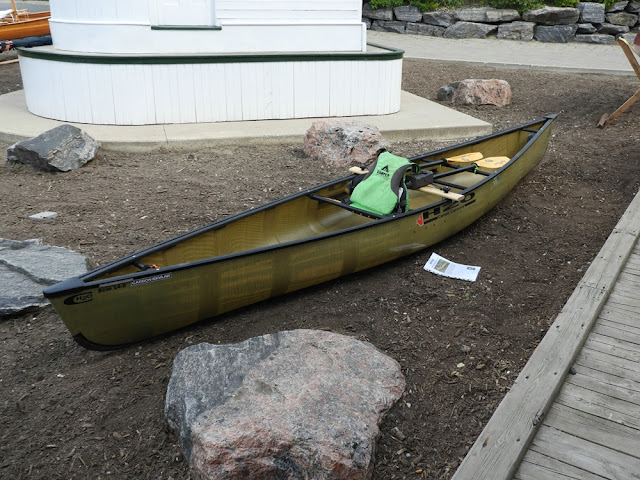 Craig MacDonald brought his large 20 ft freight canoe covered in Dacron. At one point he had this 110 pound craft up on his shoulders! 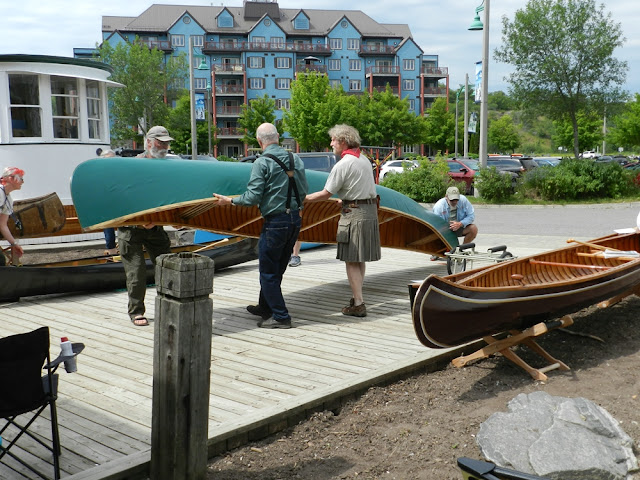 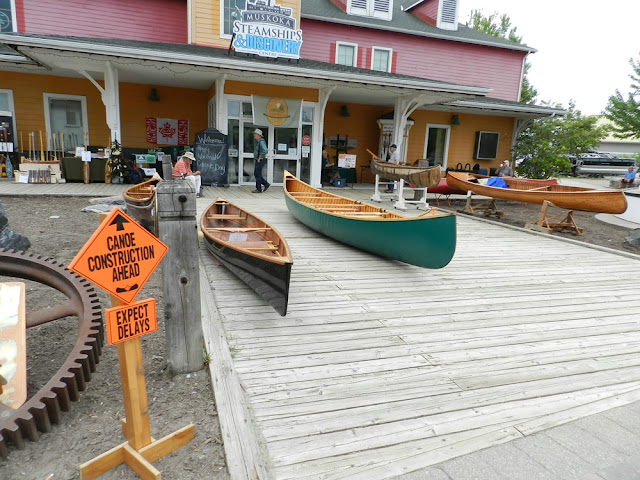 Smaller hulls were represented by Roger Young who brought along a stellar display of various Factory Sample canoes, models, and tribal paddles. 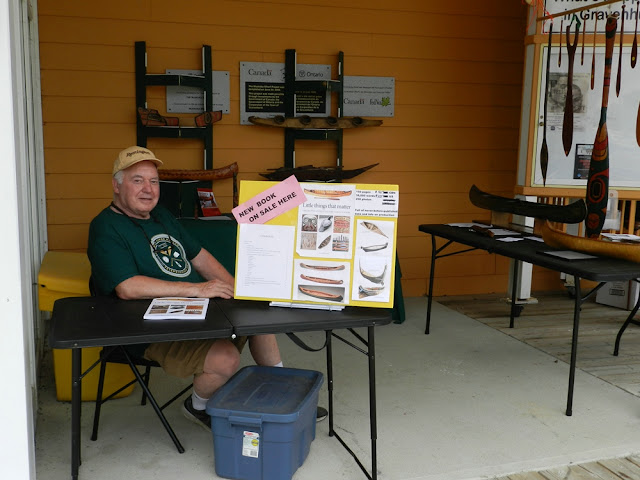 The Chapter had a few other static displays for the public to peruse. These included a 5 foot building form (courtesy of member Rob Stevens) from which the public could glean the basics of wood-canvas canoe construction. 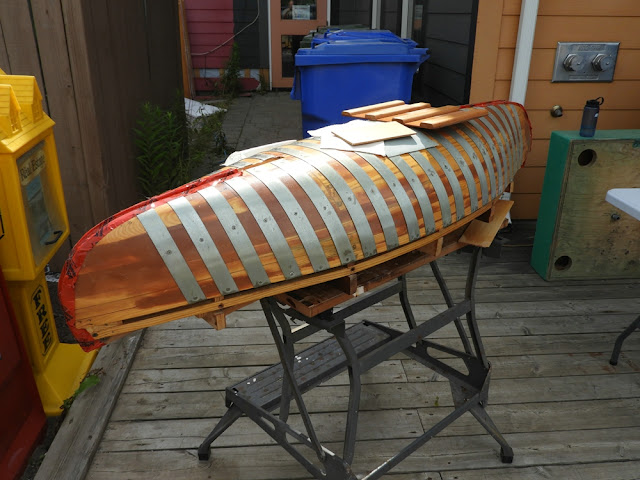 Also available was a display of both full-sized and model historic paddle reproductions as well as a 3 foot bark canoe under construction. 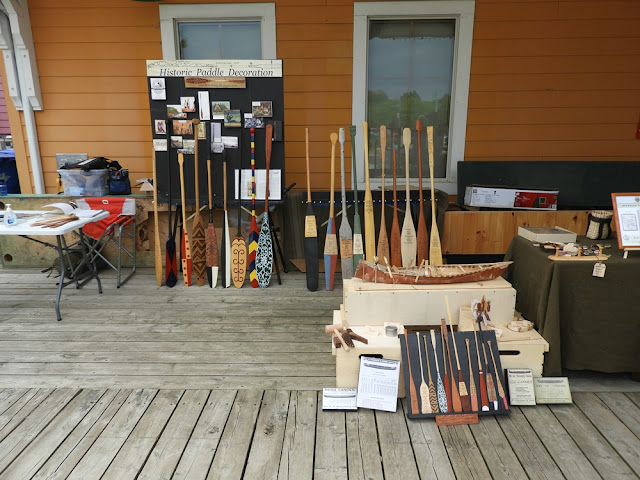 During the day volunteers spent time demonstrating paddle carving and seat caning to those with interest... 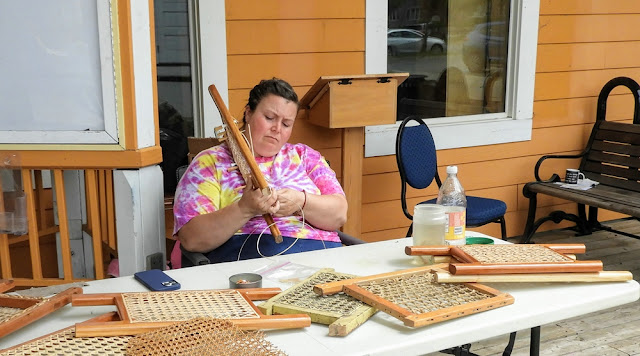 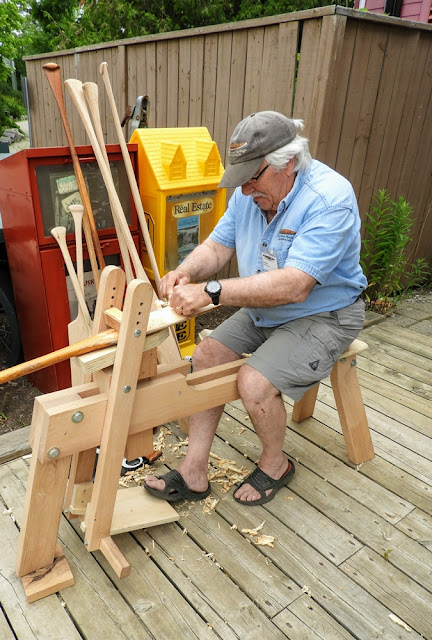 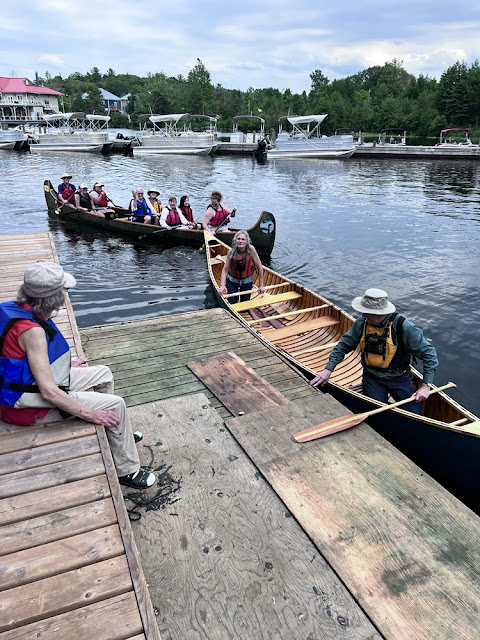 Additional demonstrations and some paddling tests were conducted in the protected bay behind the Museum building. 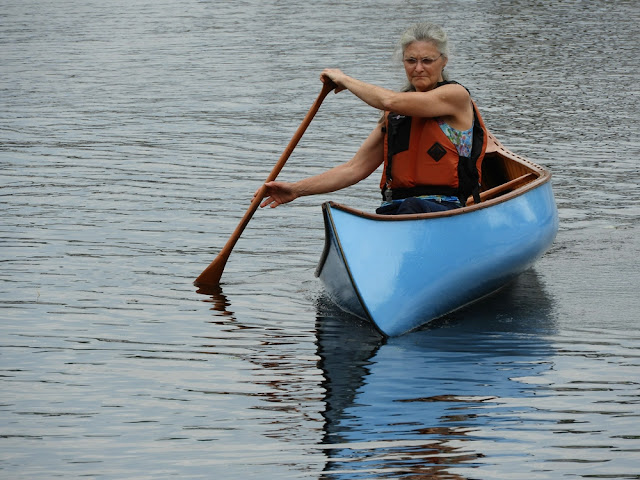 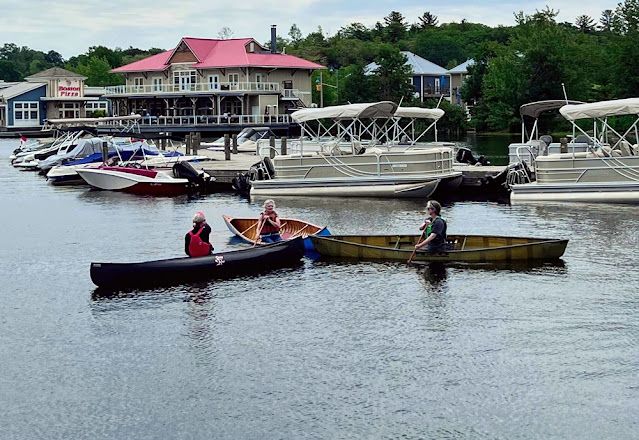 All in all, a fun day was had with fellow canoe enthusiasts. Plans are underway to make this an annual event at the Discovery Centre.

Looks like a wonderfully educational and fun event. Great photos. Thanks, Murat!
You must log in or register to reply here.