Moose season opened on October 16th this year, and my wife Irene was very excited. It was to be her first time hunting moose. Her mom had killed a nice one in 1979, and Irene was hoping to live up to the legend.
The weather for the weekend was bleak, but we were well prepared. We had chosen a spot about a half an hour drive from our house. Once there, we loaded up the 20 footer, and paddled for about 45 minutes to get to our campsite. 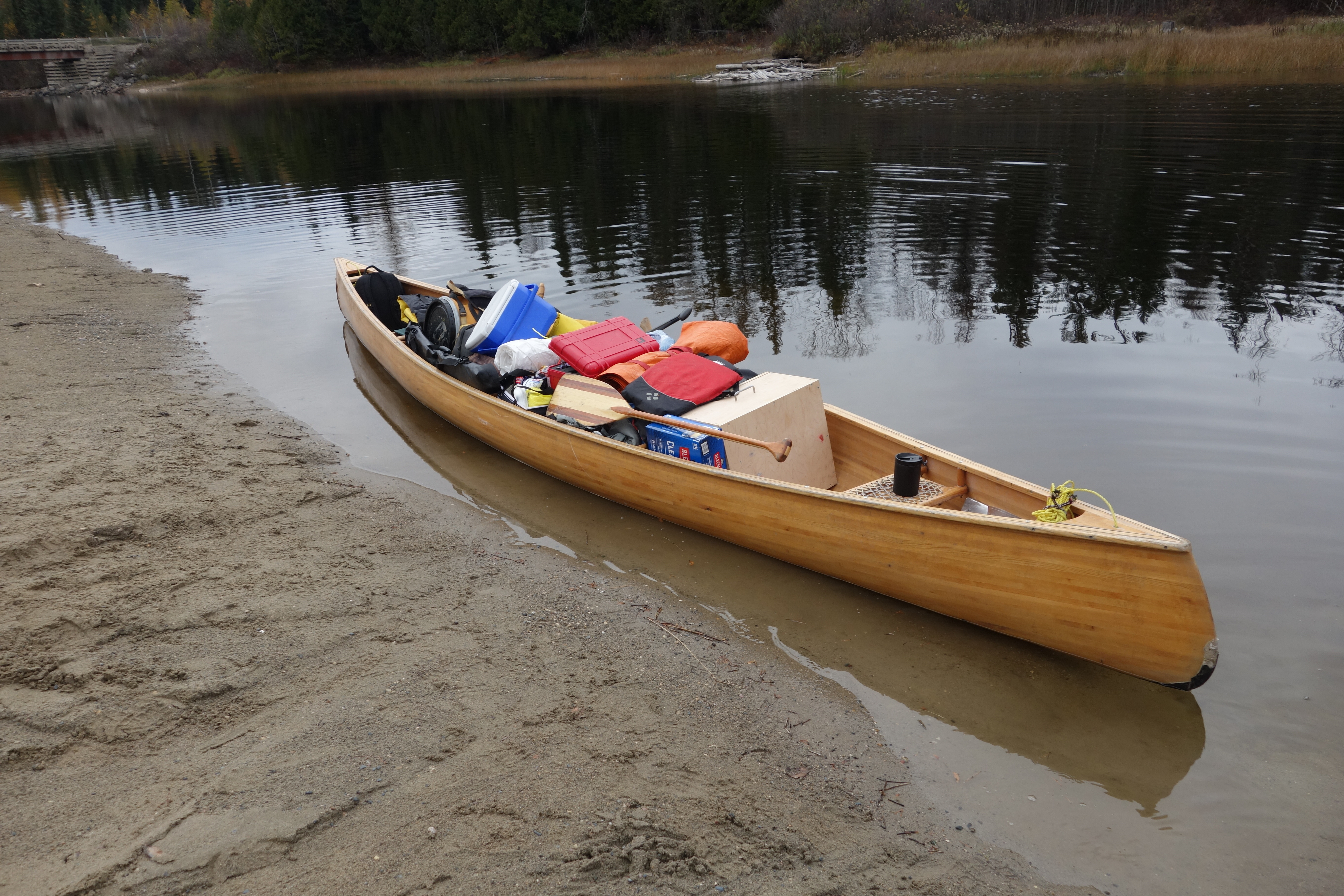 It was a beautiful, calm fall paddle, quiet and relaxing. When we got to camp, the work started, setting up the snowtrekker and the heat source. 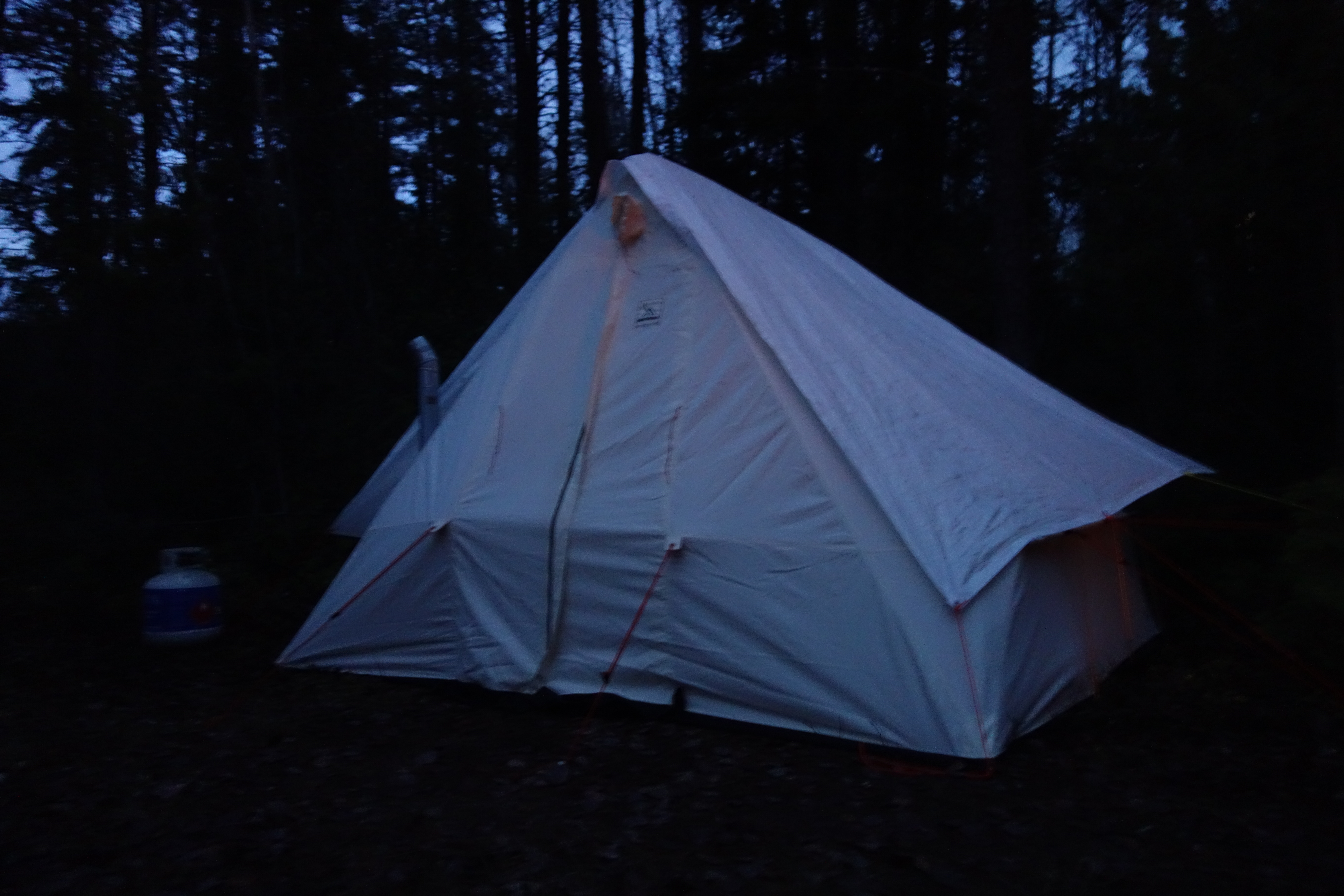 We had a great night’s sleep, although Irene was woken up around 5:30 AM by some loud noises in front of the tent. We got the coffee on and got ready to go. 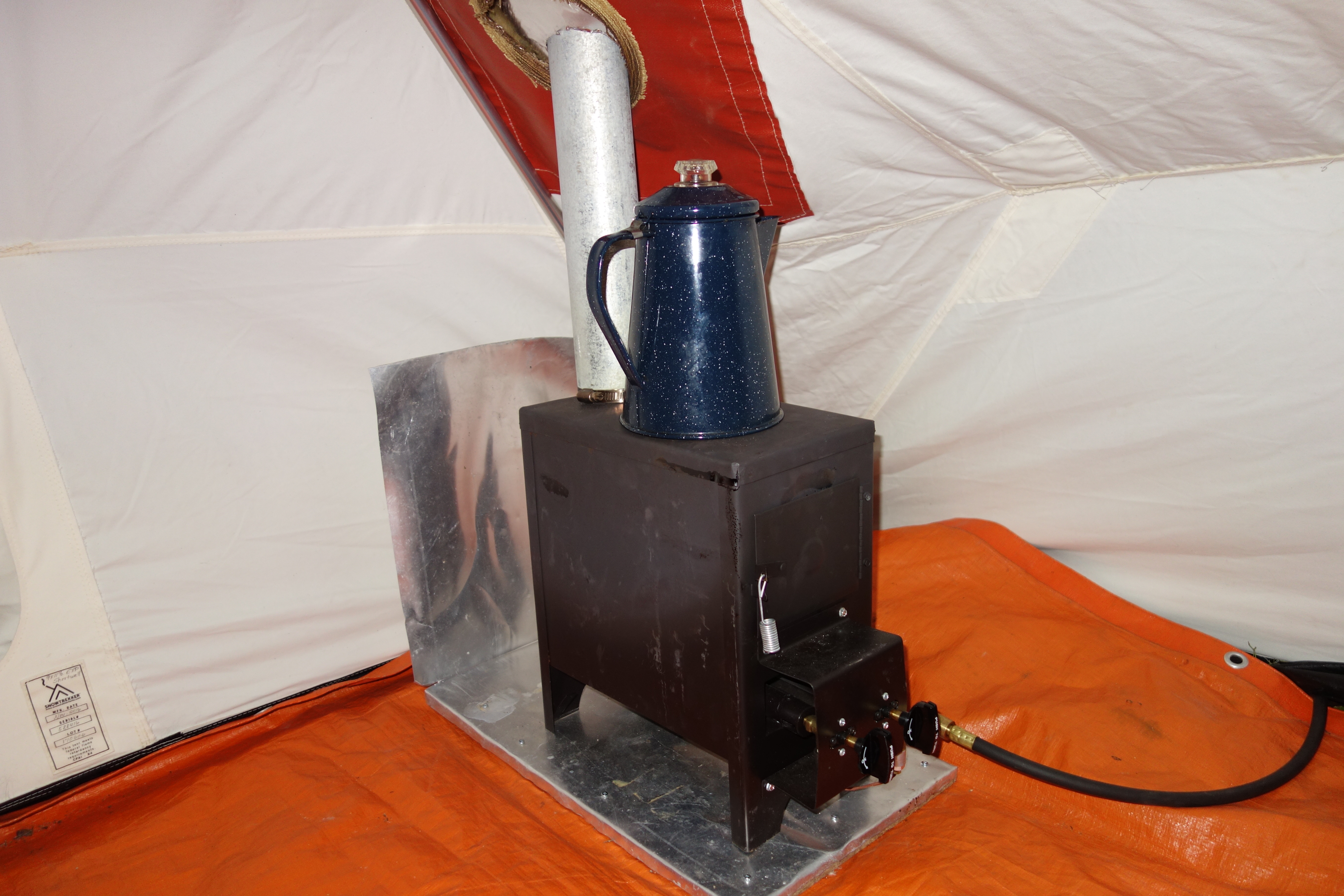 When we started loading up for the day, we saw what had made the noises early in the morning. A fair amount of excitement was in the air. 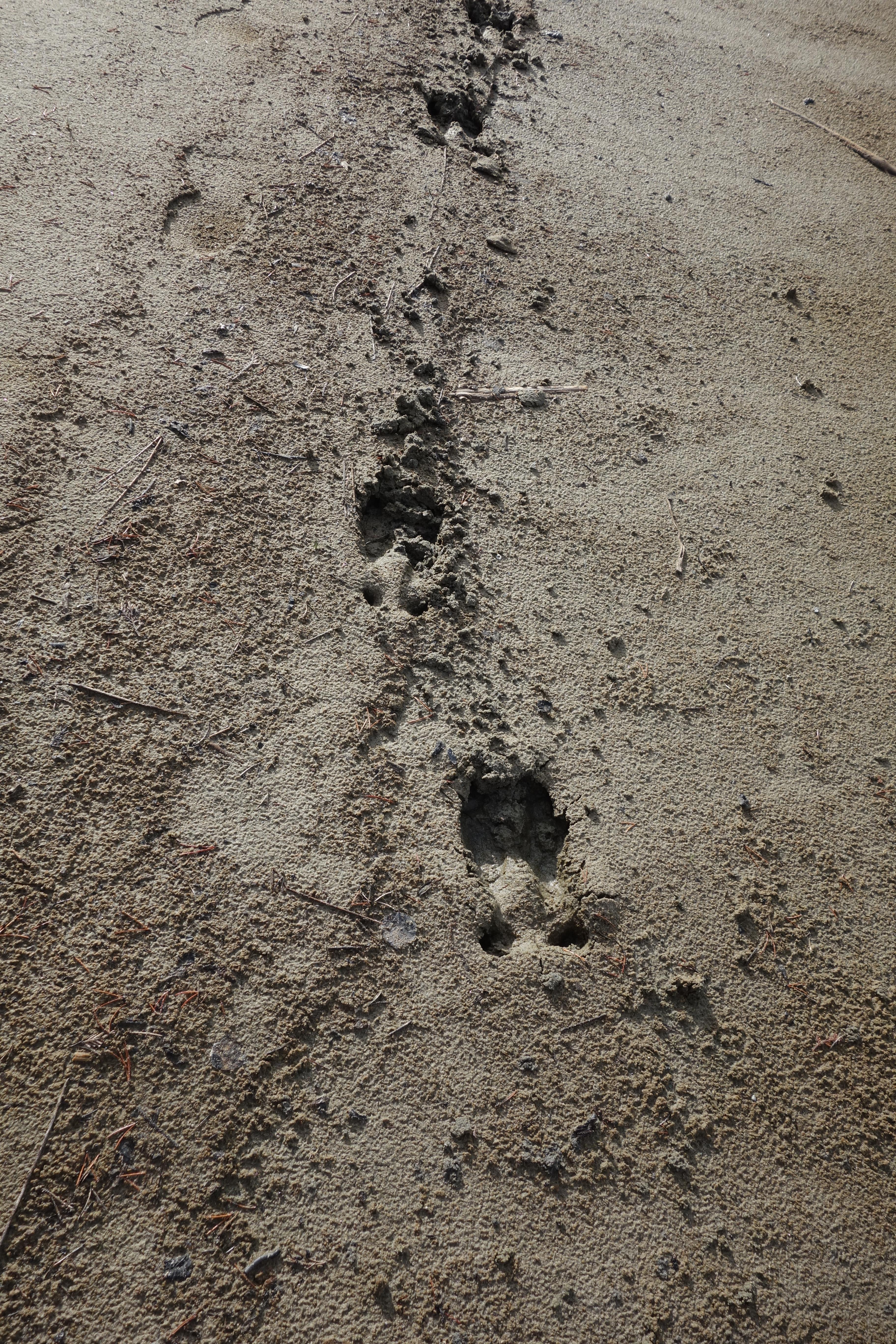 The day turned completely miserable, with rain falling continuously, but we stuck it out. Paddled around 20 k in search of the rare creature known as the moose. 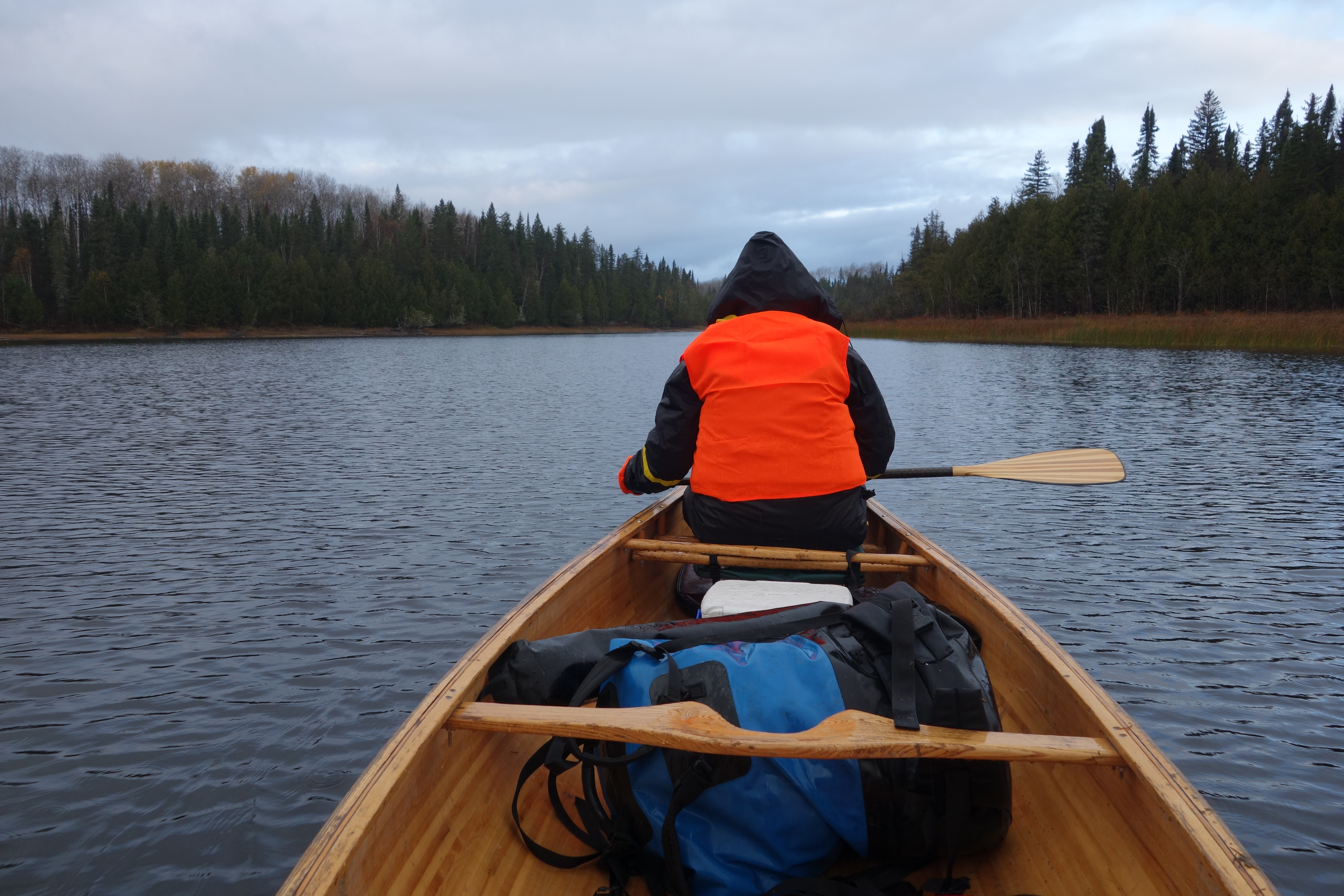 We stopped at a portage for some lunch, where the scenery was great, but the wind tunneled in and turned the place into a freezer. 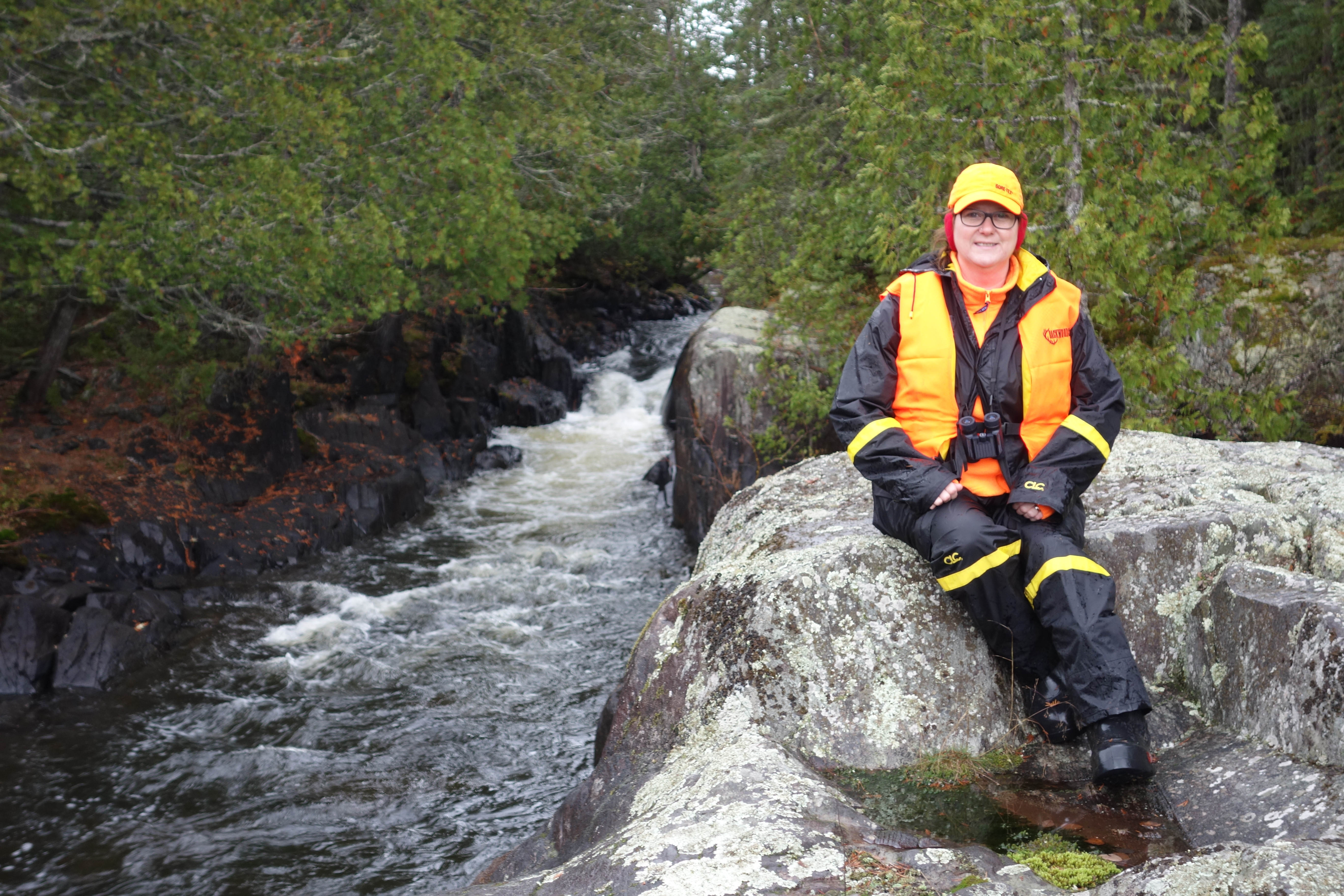 We returned to camp and called it a night. Sat around a fire and had a few beers, and planned our next attack which would be two weekends away. 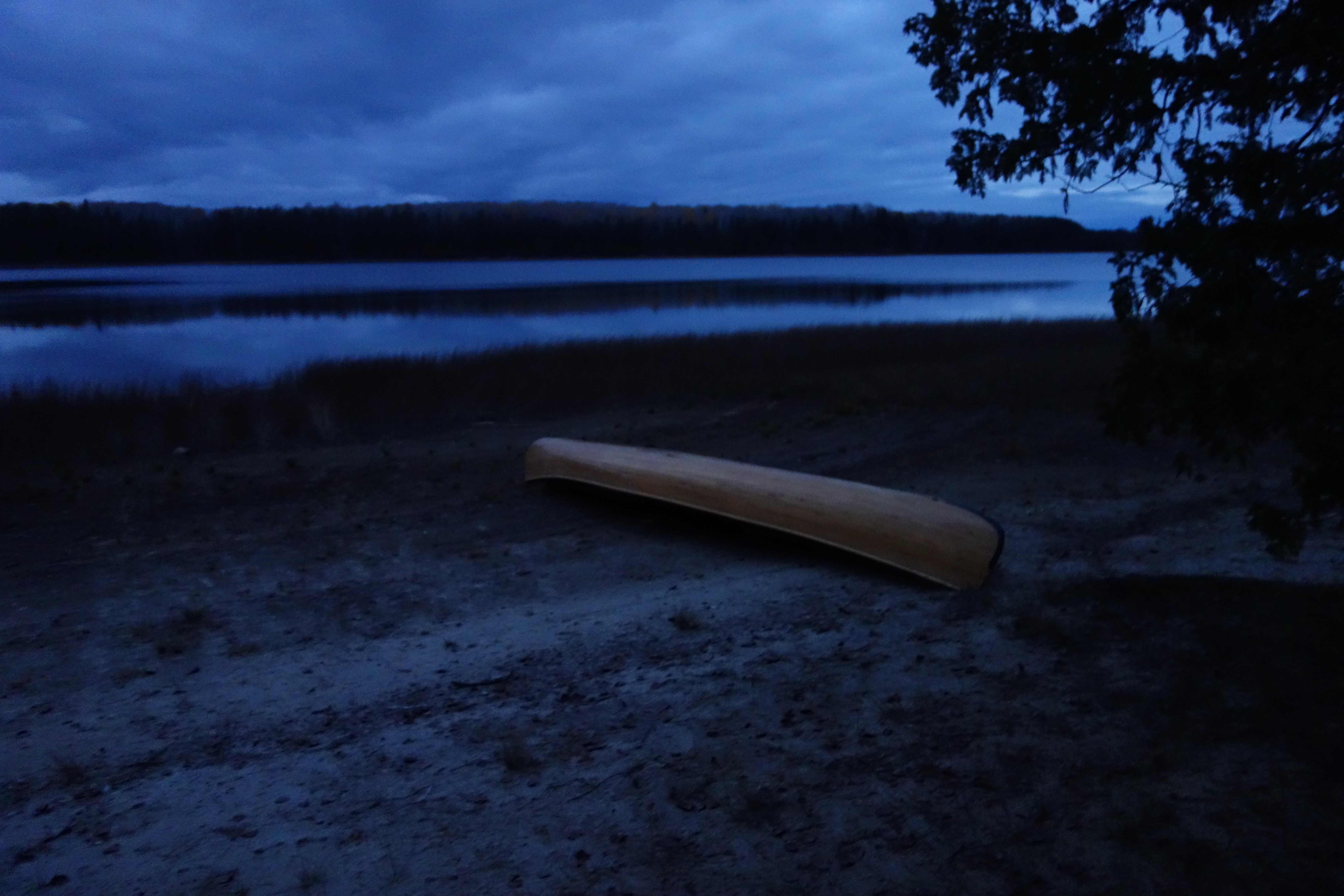 This was Irene’s birthday present, a Tikka battue in .308. She wanted a gun with a wood stock and open sites, and those are not easy to come by now. Found this one after many hours of “internetting”. 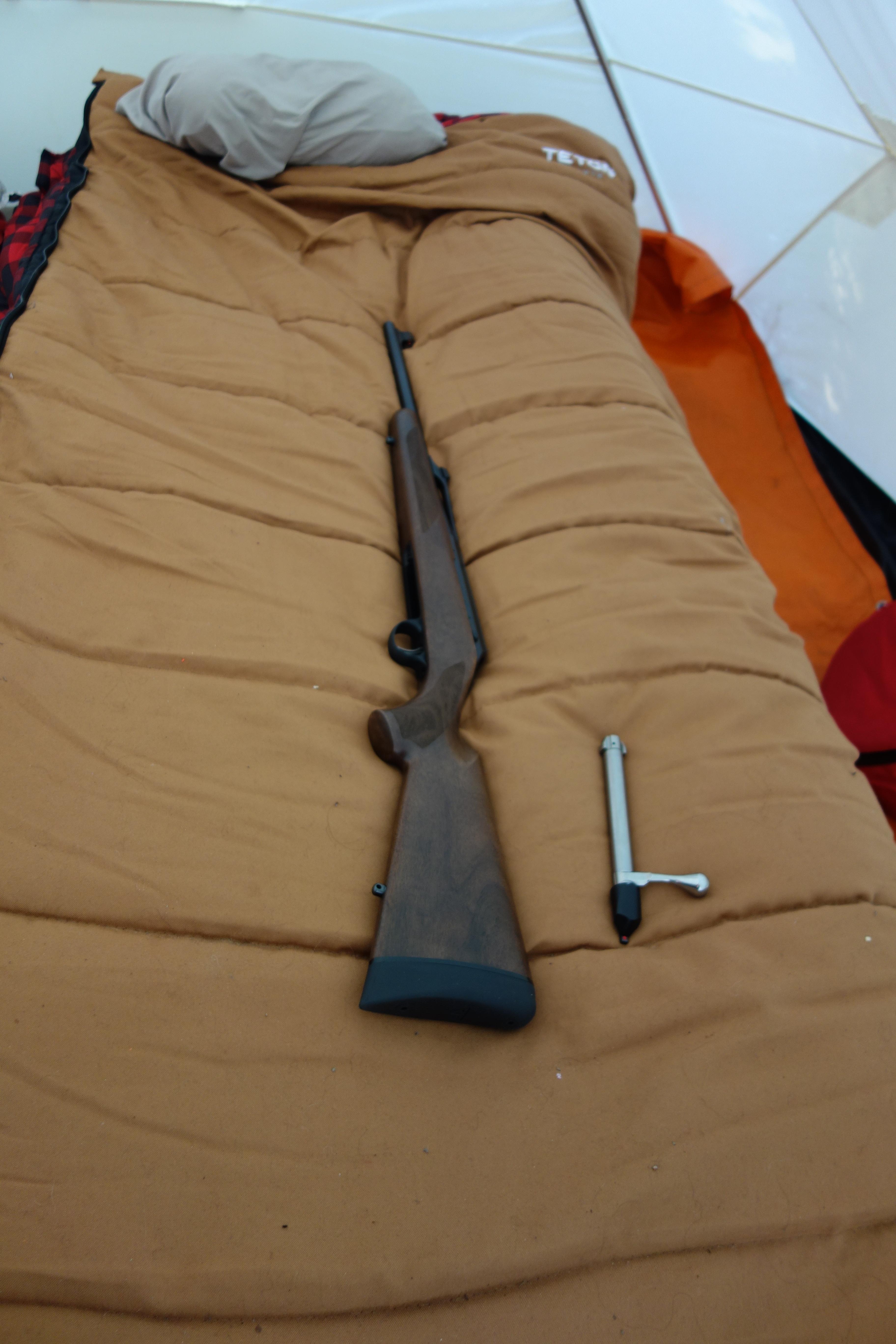 Two weekends later, we came back to the same place. The weather was a lot nicer this time, and we saw lots of moose sign, even chased a bull for a while. We had to push it to get to camp while it was still light, but once again, it was a beautiful paddle. 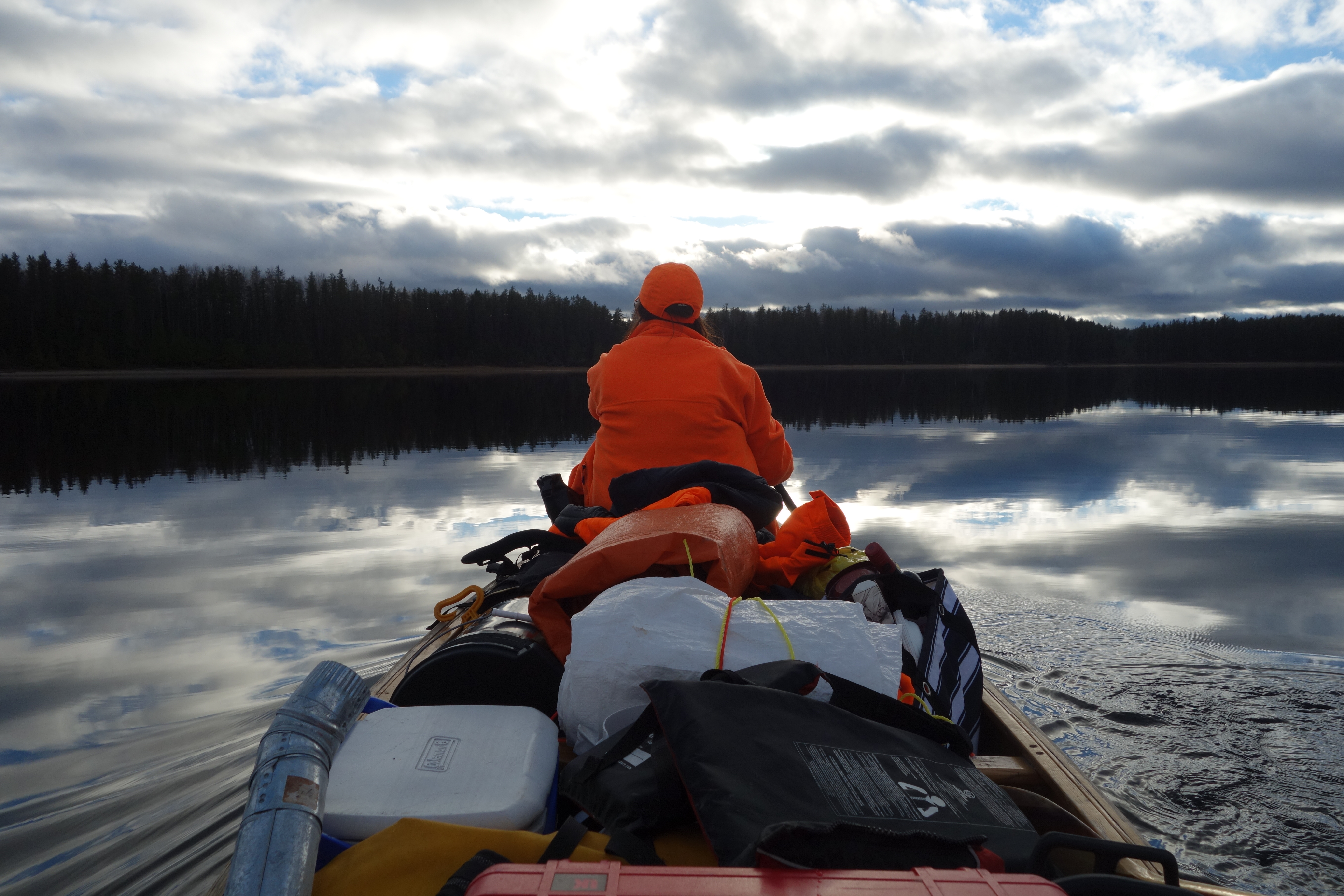 Had the tent set up and a fire going by 6:30, and a very pleasant night unfolded. 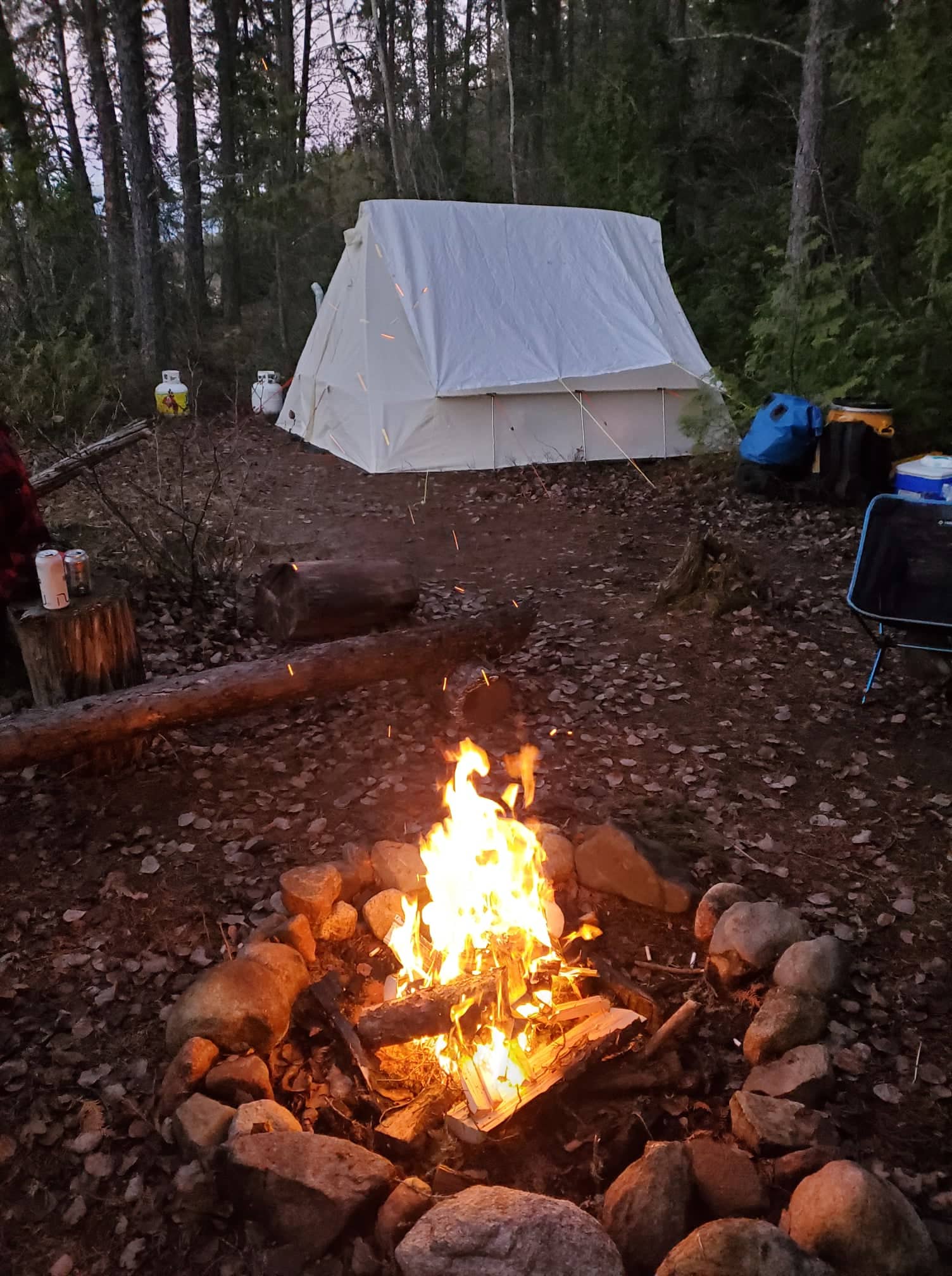 The view was first class! 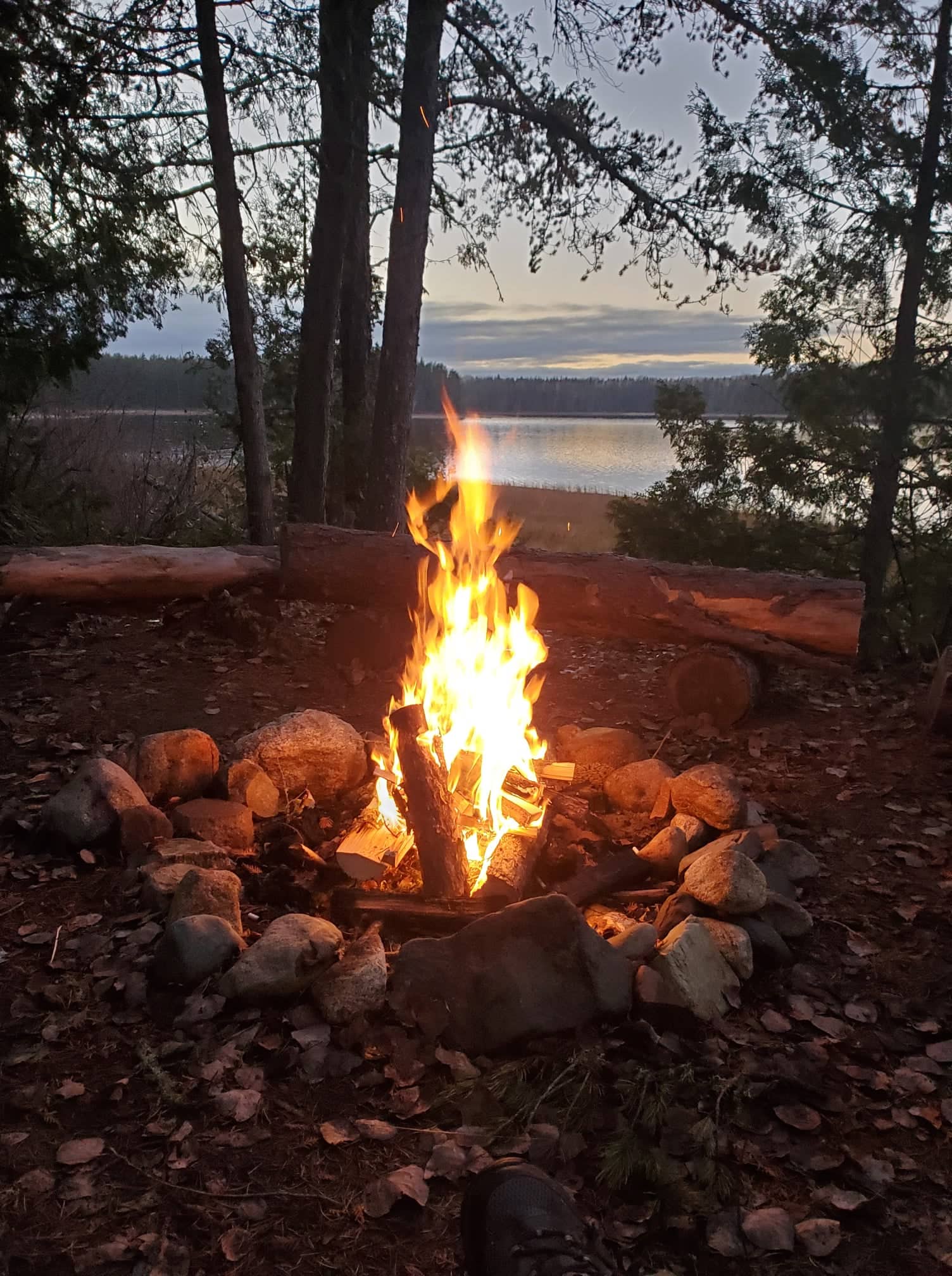 Some of you old timers might remember Oldie Moldie, his axe sheath that he made for me goes on most canoe trips. 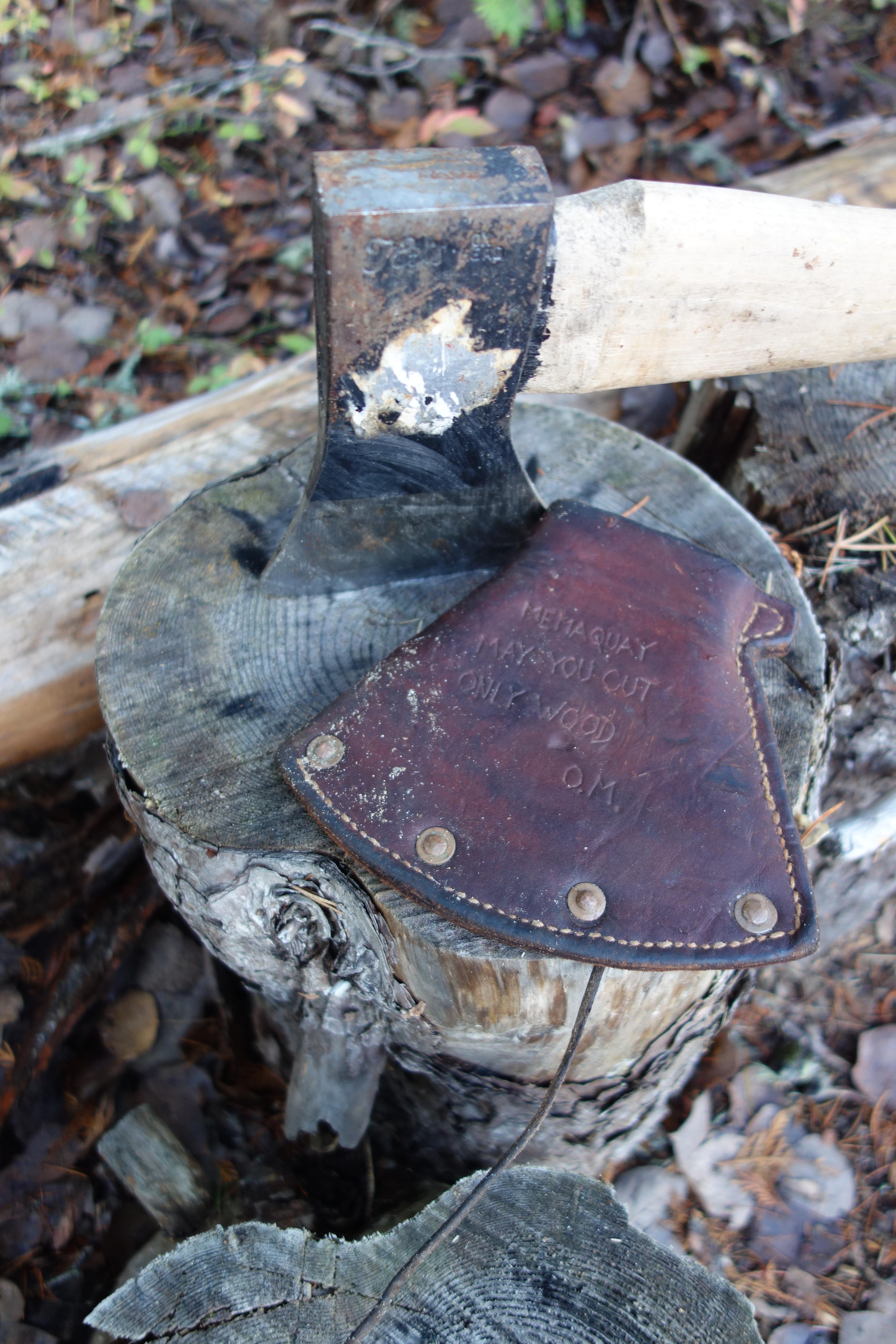 Life in the snowtrekker is pretty sweet. The Nuway propane stove is awesome for shoulder season. I went through about one full 20 pounder of propane for both nights, and we could sleep outside our sleeping bags. It went down to about 0 degress Celsius, so it wasn’t terrible cold, but we were living the life of luxury. 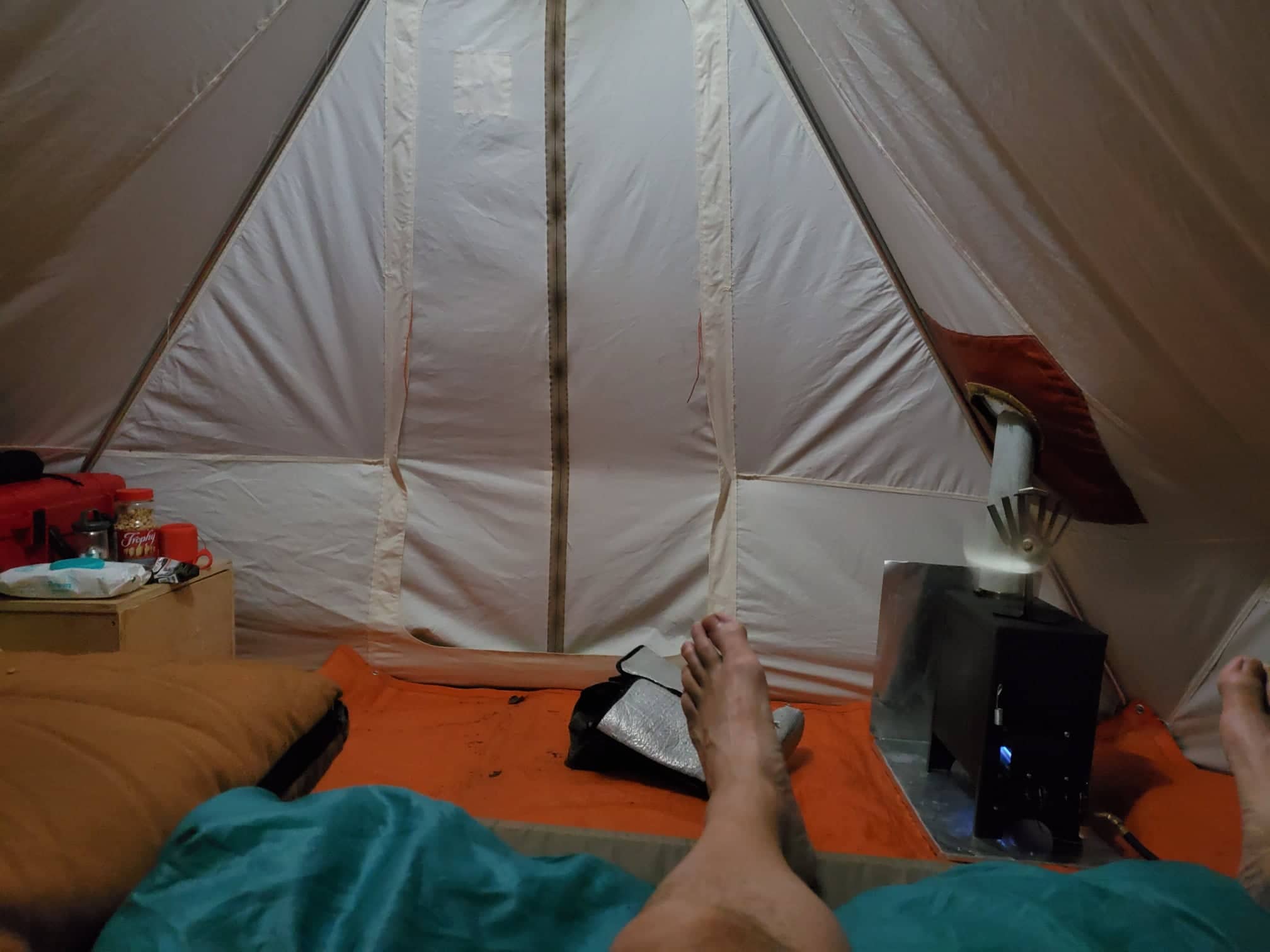 Started off the morning early with bacon, eggs and coffee, all cooked on top of the Nuway. 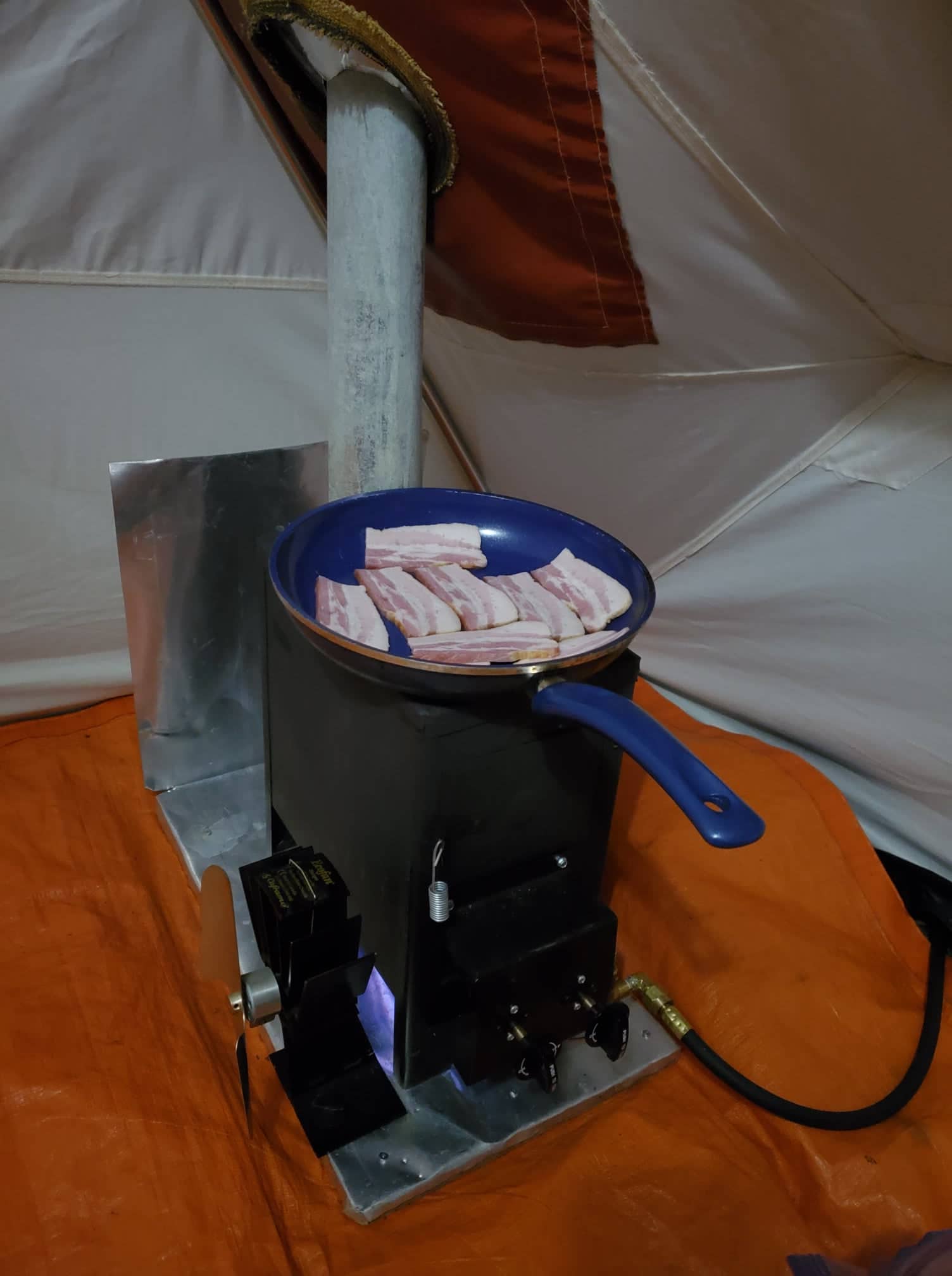 It was a beautiful, quiet, windless day. We paddled very slowly and listened carefully. We both heard a big snap in the bush on a point, so I sent Irene around the other side and tried to drive the moose out. I found the tracks right away, and went after it, but it veered away from shore and took off into the bush. We saw lots more sign that day, but no shots were taken. My buddy, Chainsaw Rob paddled in to visit us that night, so we had some merriment around the fire. 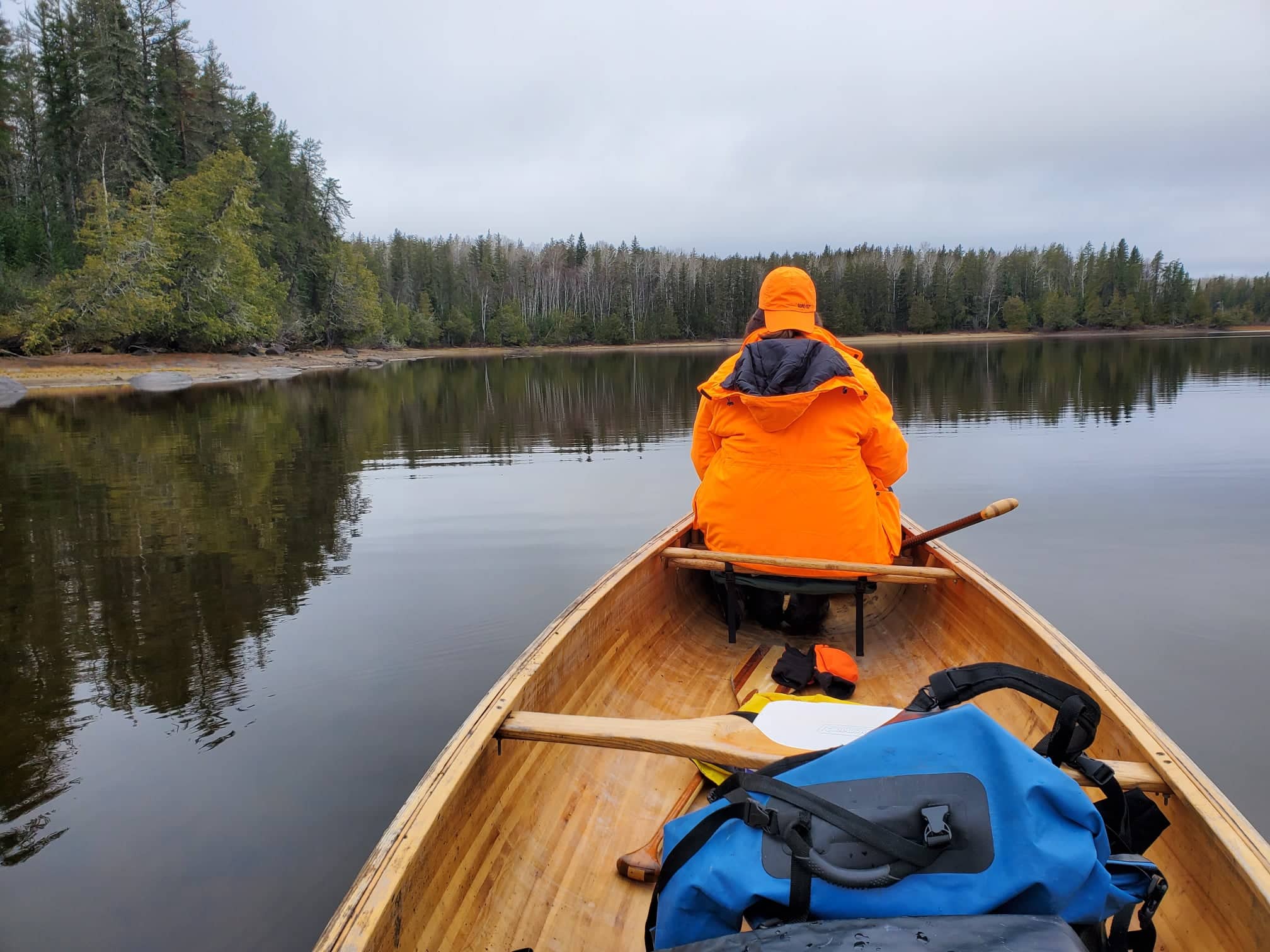 That was our last chance for canoe hunting, the water is getting hard now, and there is about 4 inches of snow on the ground. I’m just waiting for some more, then it will be skidoo hunting time. We didn’t get anything, once again, but Irene was real trooper, and hunted through conditions that would have probably kept me in the tent. We will be returning to the same spot next year, or so I have been told, lol.
Last edited: Nov 12, 2021
A

Great way to pass a weekend or two in the late autumn, tracking game with your huntress queen. Save the moose indeed, but my money's on you getting one sooner or later.

Great report, I enjoyed every minute of it. Thanks for posting.

Looks idyllic. And a good weekend for the moose, too!

Looks like a good time, that 20'er does a good job of hauling gear, having propane heat makes for a neat interior of the tent too.

I was part of a moose hunt here in Maine this October, my sil's dad shot a bull, I got to hunt grouse with my grandson just about everyday for a week, good times.

Looks like a great trip. Thanks for sharing it.

Looks like a nice trip. I especially liked the fire picture with the lake background... outstanding!

Perhaps a disclaimer: " no moose were harmed in making this trip report (but not from a lack of trying) "

Hope your fortunes improve as the season progresses.

Very nice, Mem - slightly jealous that you can just pop off for a moose hunt like that. The season is only 3 weekends long here and you had better have arranged a spot ahead of time lest you run into the hoards. Congratulate your wife on the Battue - not much to go wrong with a rifle like that and if it's like any of the Tikka's that I've owned, you almost need a smoke after chambering a round.

I must not be much of a hunter, every time I went moose hunting I was glad I I didn't get one. Caribou are another story as they are much easier to manage.

Ha ha Scratchy, that comment about the tikka action made me laugh, but it is true. I like her gun so much I might have to get one too!

Lowangle.....I was hoping to get close enough to the moose to get a rope on him, and let him pull us fully loaded back to the truck, and then reward him with a lead headache. Maybe that's what I'm doing wrong.

One day I was driving down a bush road north of Geraldton, when a toddler ran across the road in front of me. Suddenly, a three legged moose dashed out of the bush, grabbed the toddler with it's teeth, and flung it out of the way of the car. Then a rascally one toothed old trapper came out on the road and started patting the moose, while the toddler's fur clad mom scolded it for playing on the road.

I was astounded, not at the one toothed trapper and his hairy bride, a common thing up here, but at the life saving antics of the three legged moose. So I had to ask him how he came upon such a thing.

"Well", he drawled, "I shot it's momma when the calf was only a week or two old, and I nursed the little fella until it growed all up".

I had never met anyone with a pet moose before, so I asked him what it was like.

"Well, it's one hell of a guard moose. Had a big bear around here this spring, and it chased the thing all the way to the highway. Then, last winter, the shack caught on fire in the middle of the night, and the moose grabbed us by our pyjamas and hauled us out through the flames, saved our lives. In the middle of the summer, some sumbitch was prowlin around outsde, tryin to steal my quad, and the moose kicked him square in his noggin, knocked him out cold."

I was dumbfounded. I didn't know what to say, so I had to ask him the obvious.

"How come your moose only has three legs?"

The punchline is worth waiting for.

You know Mem ? You might get to camp a little quicker, if you you didn't make Irene do ALL of the paddling !
Maybe even take the canoe with a motor next time ?
Where were you going to put the Moose in that loaded canoe anyway ?
Great Story !

I've been participating in the Northern New England "Save The Deer Campaign" the last couple of months and am just now catching up on my reading. Wonderful trip report! I thoroughly enjoyed it. You set up a comfortable, functional camp and the fact that Irene wants to repeat the experience is the outcome you hope for. Well done!
You must log in or register to reply here.

Nuway stove experiment in a snowtrekker

What was the first river you ever paddled?
2