Revisting the Lower Side of Good 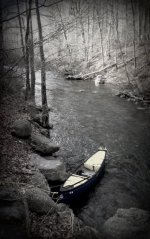 One of the singular pleasures of paddling in an old mountain range, say, the Appalachian Mountains of ‘Merica’s east coast, comes in the form of small mountain streams that come tumbling out of the hollows and down between the hills before emptying out onto the Piedmont and meandering their way to some larger river to be carried off to the ocean. The older age of the mountains, having been weathered down for thousands upon tens of thousands of years, tends to temper the character of the waterways, leveling them out to a perhaps less vertical, more sane, more canoeable profile. We like to call our Appalachian Mountains “accessible.” Lacking the wildness of the Northern forests, or the grandeur and vastness of the great Canyons of the West, the eastern Appalachians nonetheless charm us with a certain ease of travel into some beautiful craggy hills and tumbling streams. We can climb them in the snow without oxygen and plastic boots and we can mostly paddle them year round.

Occasionally, while coming to learn the workings of a new Appalachian stream—say, the stream’s canoeable levels and wildness quotient and forgiveness factor—my canoe and I stumble out into the world of what we call Appalachian Creeking, which often has more to do with rocks and boulders than it has to do with water. (Great fun in a short plastic disposable kayak and an 18-year-old disposable body: not so much in a 14’ canoe at an older age. As I was taught by the world of kayaking: “Aim for the dry rock. You won’t drown on a dry rock.” You may pulverize a few vertebrae but indeed you won’t drown.) Unfortunately, for all but the hardiest of plastic boats, Appalachian Creeking is not a healthy activity for your canoe, and can probably be likened to achieving the ripe age of 45 and then drinking too much alcohol: the recovery is long and painful and the fun rather short-lived. A tumbling mountain stream without enough water means that instead of sliding the boat down the tongues and chutes and quartering or splatting or diving into the foamy white cushions you pinball your way between the boulders, going too fast, being knocked offline and then hopefully knocked back online by all sorts of exposed obstacles and, contrary to my normal holistic and genteel paddling style, I use the paddle like a crutch to hit the rocks and jam the bottom and push my boat around only to land on the rocks at the bottom, often teetering, often falling over, while the canoe makes horrible crunching and screeching and groaning sounds. Not entirely healthy at all.

But as I said, when in the process of learning “boatable flows” and the like, sort of courting the stream, as I said, I sometimes find myself in these sorts of drunken states. Even at the ripe old age of 43, or whatever I am now.

So it was with some mild surprise that I found myself, yesterday morning, on a day that was promising a high of 64*F, standing at one of the put-ins on the Tye River—one of our classic backyard waterways—in the dirt pull-off that is the 4-car parking lot for Evergreen Baptist Church on the North Fork Tye, preparing to launch my canoe down a stream that I knew was several hundred CFS lower than I like. And when my particular put-in of the stream runs at 600 CFS, several hundred CFS makes a big difference. The gauge, some 20 miles downstream, was reading 391. Even so, I was pretending, sort of disingenuously in the presence of my boat, that I hadn’t revisited my minimal flows on the Tye in some time, and these sorts of gauges versus actual boatable levels can easily change over many cycles of heavy rain events. I could feel my boat rolling her eyes in anticipation of the pain.

I had arranged a shuttle with a friend six hours and some twenty-five miles downstream, and in anticipation of low flow, I had opted to forgo my normal overnight camp on the 35 mile stretch of river down to the James (I sing the utility of the hammock, here), and carry nothing but a few pieces of food and some water (and maybe a few light beers for the celebratory toast). And indeed, the run started without surprise. For the first seven miles of the downhill trip, we bounced and scraped, groaning and teetering on the old stones. I suspect I took three years of life off the relatively young boat and after a few hits I was questioning the wisdom of this sort of so-called ELF boating fun. I lined up for drops only to be cattle-driven to the opposite side for a plunging fall onto more rocks. I bounced and scraped down rocky shoals. And just as suddenly, I would grind to a dead halt in the middle of the torrent or clunk the bow and swing around broadside before poling my bow upstream to unpin my hull and continue the maddening race backwards, cattle-driven to the wrong side, falling over the ledge. I pinballed and teetered and fell over.

But I had the river mostly to myself (a few trout fisherman rolled their eyes and flicked me off), which has become a beautiful treat anymore, paddling alone, on any water that flows downhill in the east. And the river gradually filled, as I floated lower and the gradient subsided and Cox and Campbell and Harpers Creeks tumbled into the river, adding their patterns and flows to the whole as we started meandering across the Tye River Valley. And I recalled many a great trips with many a great people down this river full of stories. And the pillows over the boulders got a little deeper and we were able to once again glide the tongues and quarter the cushions and catch the eddies for a view upstream, of the mountains huge around us and then the mountains over there and then the mountains back there as we left them for the wide and open fields. And against my better judgement, as I was a little pressed for time, I stopped on a sandbar and stepped out of my drysuit and let the sun fall down between the trees onto the cold sand around me and warm my bare skin. And I took off my helmet for my old battered sun hat and turned the boat over and gave a wincing look at the new scars, of which there were plenty. And at some point I paddled off sans drysuit, sans shirt, sans PDF down across the Piedmont, soaking up the rejuvenating February sun.

The old man with whom I sometimes paddle, about whom you’ve probably heard me ramble, often tells me at particularly trying times—on a rainy trip one year, for instance, of about four days of monsoon paddling, with the river rising into an angry monster and the dry ground coughing up water when we tried to sleep, everything we owned wet and getting wetter—that a great river trip is not one long moment of ecstasy. A great river trip is the trip that you remember, full of rainy days and cold nights and nasty swims and awful portages. In between blue skies and clear water and soft landings at the end of big drops. Such that by the time I reached my buddy at the take out (only half an hour late!), I was smiling with that perma-grin that tends to break out when the black cloud that follows the world’s wanderers lifts, for a few brief minutes, and we step out from the mundane everyday-ness of the civilized world and we get back to where we belong: be it on the mountain, or in the forest, or on the river. We stood at the river’s edge and toasted another successful Saturday in Nelson County. And I think he asked me how the low water went at the top and I think I told him I was lowering my minimum by 100 CFS and that this was probably my best trip ever, until the next one.

And then he might have said: "You mind going ahead and putting some clothes on?"

Good stuff, I need to try east coat boating. We had it similar in MT, much of the small water was either trickling or raging. Not much in between.

In the southwest it's feast or famine, we're either on for a week or two or three or I'm paddling our mountain lakes.

That's a cool picture there. I have a friend in SE KY and I would love to canoe down there, but I am a flat-water guy. Thanks for your trip reports.

You're welcome Cary. And don't be fooled by the downhill feel of Appalachian Rivers. There's quite a bit of scenic and historic flatwater floating (of which I do a fair bit) and quite a bit of river to be run by anyone willing to do a little portaging of the occasional drop (which at my current age I do rarely--and must often pick up the pieces as a result).

Speaking of Kentucky, we've got the Big South Fork Cumberland River coming up soon--perhaps next week (depending on water)--which is about forty miles of mostly flat river through some classic National Forest. We'll put in on the New River or Clear Creek in Northern TN and end up in KY. Some of our group will forego the first night/Class III/IV section (of only about 5 miles) and join us below for the remaining two nights / 30 mile trip. I'll be barreling through in my loaded canoe as will Old Man River who at the age of 74 is now oaring a Star SLICE down the technical Appalachian streams and who is as of yet still gracing me with his presence. There are a couple three bigger drops in the remaining 30 miles to civilization that will probably be the spots of much groaning and sweating and cursing and portaging. The joys the joys.
You must log in or register to reply here.