Weird that a Shaw & Tenney came out too thickly bladed. We had one, don’t remember which, many moons ago and the blades were so thin I didn’t trust them in anything but the flattest of calms.

I gained some confidence in the durability, took it on a gentle river trip and immediately cracked the blade when I barely tapped a rock. Fixed the split and gave the S&T to a friend, who proceeded to crack the blade at least twice more. He likes it enough to keep using it, and keep fixing it. Not for me.

I do like fixing paddles more than I like making paddles from scratch, especially older ones with history or sentimental value.

A friend brought me four paddles from his family’s camp, 1960’s beavertail-ish sticks, which in his memory may have been Shaw & Tenneys. Paddles that he and his brothers had used growing up.

50 year old paddles that had never been maintained in any manner, eventually unused for years, they were rough, but the wood still promised to be pretty. Sanded, stained and multi-coat varnished (actual varnish, not urethane, with oiled grips) the blade grain on a couple of them was stunning.

And one, perhaps Spruce, had no grain; I tried a couple different stains and nothing popped, it was still dull blah bladed. I might better have left it unstained clear, but too late now, screw it, I put a couple coats of ebony stain on it.

Sanded, stained, varnished and between-coats sanded some more they are hanging in the background of this photo. 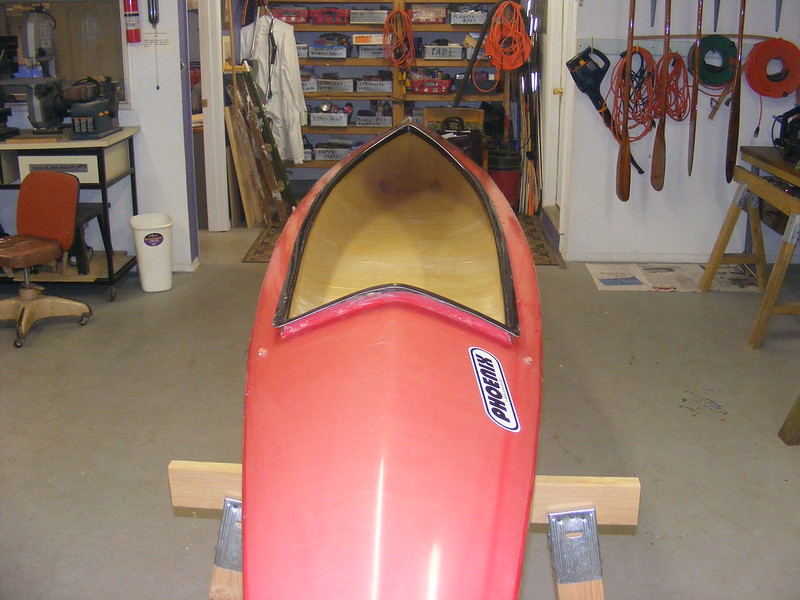 They are back to being family heirlooms, and back to being used. And evoking brother-bickering “No, that one is mine”. The ebony black beavertail was “That’s mine!”, claimed before it left the shop.

At least one is so much “Mine” that it stays in the brother’s possession 365 days a year, travelling to and from that same childhood camp. I bet someone stole his toys as a child. And I’m so glad he like it.

There is something to be said for decent quality wood paddles of that era and before. If they are still largely intact they have passed the test of time. And perhaps, back in the heyday of wood paddles, there was a better selection of native lumber from which to select blanks.

Idiot Savant said:
45 for shipping? Is that US dollars? Yikes, if it is.
I recently emailed Shaw and Tenney to get specs on the Penobscot. Their only paddle that is reasonably priced, in my view.
I think you can order their paddles unfinished. That way you could do some sanding on your own. If I were to order one, that might be the way I'd go.
Sassafras wood sounds interesting.
Lots of nice paddles for sale for less.
I bought a cheap, varnished beavertail, cut some off the end, rounded the corners and revarnished it.
Click to expand...

Yes it was US dollars and that is what they charged me. Their actual cost may have been different.

I like an oiled paddle so that's how I ordered it. I thought the finish was a little ruff and not as good as I do on my own, which is understandable as I can afford to put a lot of time into it. Even though I sanded it down I'm glad it was oiled. It acted as a kind of gauge as anywhere there was a hint of the oil still visible I knew I had to go deeper in that spot. After that I used a caliper and measured.

As far as their specs go I asked about them and was told it was up to the carver and the individual piece of wood. I personally would not order another custom paddle if I were concerned about weight. I would get one that is already finished and get the specs for it so I know what I'm getting.
You must log in or register to reply here.

Attempting to make a couple of paddles
2

Paddle mod / make it my own

Bored, so I made a paddle