I always like to come here for the great advice from the elders....so here we are again.
Anyways.
I have a 16 foot fiberglass canoe. I absolutely love this thing. It's super stable & super fast. A little troublesome against the wind but overall a joy to paddle.
Now for the bad...... I hate how heavy it is. I always go solo ( + dog ) so it's just me loading it up top. I have a good loading technique, but it has a lot of rocker & sometimes gives me a hard time.
Now for the question: I found a MR Destiny nearby. It is 17 foot & while they called it "fiberglass" in the ad from what I researched it is probably Kevlar Lite.
I couldn't find many reviews on it only specs. Shallow V, slight rocker. If the ads are right it's only 50 pounds.
Now the price the were asking was (I assume) great if is indeed Kevlar right? Will I ever find a Kevlar boat under $500?

Soooo. Do I take the risk & get it? Is canoeing a "keep buying until you find the perfect one" kind of deal?

Thanks for any advice.

I personally don’t see the risk. If it is in good shape, you could always sell if for probably more than you paid if you don’t like it.

You can always call MR with the hull number and find out exactly what it is. I believe they had two different Kevlar layups with this model. Sounds like a great find.

Mad River made five different composite layups (fiberglass, kevlar, kevlar expedition, kevlar light, etc) of the Destiny between 1996 and 2001, and a rotomolded poly version in ’07 – ’08. The lightest, the KL version, was 42 lbs, standard kevlar 59lbs and the fiberglass version was 78lbs.

If it is a kevlar model, in decent condition and one of those unicorn sub-$500 kevlar canoes it won’t last long, and in today’s market you could re-sell it for what you paid. Picking a year at random, in 1999 the standard kevlar version cost $1999 to $2199

So there WAS a fiberglass version? The only info I could find was a Kevlar Expedition (w/ wooden gunwales) and the Kevlar Lite (w/ aluminum) So the seller could be accurate in describing it as fiberglass. If it is indeed 78 pounds I wouldn't be breaking any new ground.
Like I said my 16 foot fiberglass is as awesome as I could imagine it.... just heavy & awkward to load w/ it's rocker. 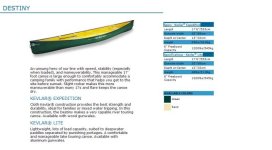 If it is still available certainly no risk in purchasing it. Does seem like a good deal, which is not a bad reason to buy a better boat.
Seems though, if you are mostly paddling solo (with dog) are you looking at the right boat? How loaded do you travel, for how long, what conditions? At 17'6" and a 35" beam this is a big boat for solo, good enough for long trips but a lot of hull for day excursions.
Late to reply - what happened with the boat and decision?
You must log in or register to reply here.