Just a little heads-up at this time for any thinking about upgrading cameras and phones (eg. Erica's thread on phone cameras)... there may be some new tech to make phone cameras even more capable. Photos might be taken in very low, near-dark light conditions, noise reduction greatly improved with less grain, much better telephoto capability, reduced glare and haze, improved resolution to DSLR quality, elimination of blur, improved image stabilization. Maybe smaller compact cameras, and tech that can be applied to all camera types and... binoculars.

My compact waterproof point-and-shoot is fast approaching ten years in age and I've still not upgraded since photo quality so far has been good enough. Still, getting old and maybe obsolete.

I've included some news snips starting from 2018 with an announcement and more recent news releases after the first prototypes were shown early 2020.

Still nothing in actual production and no reviews... worth watching and maybe worth waiting for. Or not, some of the past tech promises have failed. Besides this, there will be plenty of other developments that keep the trend going

Google is also working on this making similar promises to Nexoptic's below.

VANCOUVER, Oct. 30, 2018 /CNW/ - NexOptic Technology Corp. ("NexOptic" or the "Company") (TSX VENTURE: NXO) (OTCQX: NXOPF) (FRANKFURT: E3O1) is pleased to announce that it has developed and continues to refine cutting-edge artificial intelligence networks ('AI') for photography. NexOptic's engineered AI drastically reduces image noise and motion blur common in poor lighting imaging environments by leveraging deep convolutional neural networks. In addition to enhancing image quality, this technology could be used to improve long-range image stabilization and image capture in extreme lighting conditions. NexOptic believes that this technology will have significant commercial applications in a number of industry verticals, and has the potential to be incorporated into its current sport optics and smartphone lens offerings. Results of NexOptic's AI will soon be available for viewing on the Company's website.

Darcy Daugela, P.Eng. and Chairman of NexOptic stated, "We have long believed that the future of imaging lies in the harmony between disruptive optics and innovative software." He continued, "Not only does this technology expand the potential applications of our existing long-range imaging capabilities, but it presents new opportunities throughout the broader imaging industry, as this technology can be applied to virtually any imaging system."

ALIIS improves image quality for a superior all-light performance solution. By learning a camera profile and optimally enhancing for improvement, images and video are corrected in a fraction of a second using edge processing. The result is superior resolution and sharpness, dramatic reductions to image noise and motion-blur, noticeable enhancements to long-range image stabilization by enabling faster shutter speeds, and significantly reduced file and bandwidth requirements for storage or streaming applications. Downstream applications include computational imaging, facial recognition, and object detection, giving it even broader market applicability.

“We’re continuously raising the bar with ALIIS,” said Kevin Gordon, NexOptic’s VP of AI Technologies, “By providing sight for machines, we’re at the forefront of a very exciting future for imaging and artificial intelligence. The impact on cameras, media applications, and streaming will be game-changing.”

NexOptic is an innovative optical development company, which aims to enhance the way we view the world around us. The Company is preparing to launch DoubleTake, its multi-award winning, reimagined binoculars designed to disrupt the growing outdoor recreation market. DoubleTake utilizes NexOptic’s high magnification lenses for a state-of-the-art digital experience. NexOptic is also working to commercialize its ground-breaking artificial intelligence (“AI”) for imaging as well as exploring opportunities for its innovative mobile lens designs.

Canadian technology company NexOptic Technology (TSXV:NXO,OTCQB:NXOPF,FWB:E3O1) has developed its own artificial intelligence platform called ALLIS (Advanced Low Light Imaging System) for shooting high-visibility photos in low-light situations. To shoot a digital photo in low light, the camera’s sensor needs to be adjusted to be more sensitive to light, which reduces the sensor’s accuracy and results in a grainy or noisy image. The level of sensitivity is referred to as ISO. ALLIS is able to “repair” high-ISO images based on how the AI algorithm interprets what the image should look like. ALLIS can work on small imaging devices like tablets and smartphones. In addition to consumer and professional photography applications, ALLIS could be useful for low-light facial recognition or object classification applications.

NexOptic intends to integrate ALLIS into future versions of its own unique consumer-grade optical device, DoubleTake. The company’s DoubleTake device combines the long-range video and photography capability of a DSLR camera outfitted with a telephoto lens with the usability of a smartphone camera. The device features an array of lenses (not unlike those within a telescope, but much smaller) to create a focal length equivalent to 423 millimeters, which is combined with AI image correction to capture 4K video from a long distance. Rather than using a viewfinder, DoubleTake features a smartphone-like touch screen interface and its video can also be cast in real-time to smartphones and other mobile devices. NexOptic plans to launch the DoubleTake in 2020 for a price in the neighborhood of US$1,500, making the device competitive in price with traditional telephoto lenses for DSLR cameras.

“One of our core objectives is to become a major fixture in the growing sports optics and sports camera markets,” said NexOptic Technology Chairman Rich Geruson. “The interest in DoubleTake continues to grow even before consumers have had a chance to experience it for themselves. I’m excited to get DoubleTake to them in the nearest timeline possible.”
Last edited: Jul 28, 2020
B

Did you ever buy the Ford Ranger that you were talking about a few years ago?
I am waiting to see one of these drive past the old homestead.
https://www.topgear.com/car-news/british/heres-your-first-look-ineos-grenadier-roader

Hi BB... I'm surprised someone still remembered after all those years, glad that these posts don't disappear into thin air.

Unfortunately, the new Rangers are off the list since Ford widened the body so much they will no longer fit through the narrow driveway that I have to use to park in Toronto. When they said they were going to "bring back the Ranger" after stopping production, they didn't say there'd be that much redesign. So I'm still driving my 2010 Ranger, no complaints.

The Toyota pickup i drove before was narrower still and easy to drive through narrow bush roads... maybe the new Rangers have been widened to increase stability while offroad.

Young birch trees photo for you from my old homestead since you said you were interested in these... cheers,Rick. 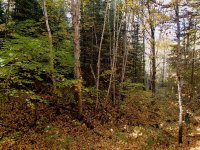 PS... just to add to the thread topic, check out the AI capability in the new Apple iPhone 12... esp the night photos. High quality results, camera does it all.

I meant to post that in "Photo of The Day" but was posting from my phone and I screwed up. I took it with an iPhone 11, not sure about HDR. I got the iPhone 11 for it's low light photo capabilities. It works real well but I thought some of my full moon pictures came out so bright they almost looked like daytime.

Well, you've got one of the best phone cameras there is in the iPhone 11, explains the quality in managing the light levels. My poor, dumb,10-year-old Olympus waterproof could never keep shadow and highlight detail showing like that, even with HDR.

HDR uses several different exposures then fuses them together into one image to try and keep shadows from blacking out featureless and highlights from blowing out to blank white, but still, if the brightness range is too extreme, there will still be some over and underexposure on very contrasty subjects.

The iPhone 11's AI takes things further by combining the best characteristics from eight photos taken almost all at once from both lenses (or is it three) and then deciding on which pixels to combine together to create the best quality photo... IIRC they call this Deep Fusion. The phone's waterproof, too.

The big selling feature with the newer 12 is 5G connectivity which will bring all sorts of new capability to phones but full 5G coverage and apps are still years away. The 12's camera does have some improvements over the 11, with a faster lens (27% more light for low light improvements), LIDAR radar sensing to sense depth of field needs, and other stuff mentioned in reviews I can't remember. The image improvements and AI extend into video as well, up to 60 frames per second.

Keep the pix coming... thanks!

Qualcomm's new 888 chip should be available during the first half of 2021 for any Android users upgrading... if not, shows where things are going with phone photography vs dedicated cameras. The new AI capabilities in the chip can be used for improved focus and exposure choices if you don't want to spend the time setting these manually.