I was blessed with a chance to try a Cricket 'Hemlock'/Honey Island Cruiser the other night. Holy F! I'm still thinking about it.

The dangerous part is I really, really want one. It goes against everything the modern canoeist say is right. It's a long stroke, but it requires little correction and damn can it make a Peregrine move! It knifes through the water and catches like nothing I've ever felt. It's absolute bliss. It's dead quiet if you paddle it right.
I tried it on calm water. I really want one. I really should try it in chop to see if I catch the top of waves... but I don't care... I'll learn how to adjust my stroke.

Keep in mind that Mike Jones at Cricket makes the Honey Island Cruiser in three different blade sizes and at least two grips. He can also do other grips not shown on his site. He also has other paddle shapes.

The one I tried was the 'correct' size for me. It felt longer than what I'm used to but the shaft was the same length as my Fox paddle. The blade is about 2" longer though. The stoke feels immensely longer but you get so much force you can fly with a relatively slow cadence.

It was a religious experience.

The stroke needn't and shouldn't be longer, at least aft of the paddler's knee. That misdirects force in an upward direction and pulls the stern down into the water. That said, Cricket paddles are wonderful. I use the Gemini.
G

Immensely longer than sitting with bent shaft... Mostly longer before the knee. I still pitch the blade near my hip... I think.

The boat goes straight, fast, and doesn't bob. I think it's in the ballpark.

Oddly enough I don't think much about where my paddle is or what it's doing kneeling in a solo boat. I mostly just think of how the boat responds and just adjust my motions accordingly. The same can be said for a tandem, but it feels more disconnected and sterile.
Last edited: Sep 17, 2014

From Mike Jones, here is a picture of the very first Honey Island paddle ever made by the Blackburn brothers. Mike refinished it several years ago and photographed it. 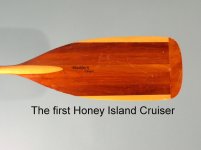 The Honey Island paddle was designed by Mickey Landry. I don't have the Glaros & Wilson book near me now, but I believe they credit Landry with being one of the five or six godfathers of Freestyle canoeing.
G

It's evolved a bit. The side profile and dimension would mean more to me... and perhaps not... probably just how it behaved in the water.

Dave seemed pretty adamant that the blade size and shaft length were the right size for cruising with a solo boat at my size. My gut tells me go shorter, but I have no complaints.

LO is young enough and strong enough to handle a canoe paddle of sizeable acreage. As he gets to the age of us in the declining years, he'll get shorter bladed paddles to accommodate aching joints.
G

I've not paddled that long one much, but honestly my stiff, short bent carbon paddle makes me more sore. I'm not sure if it's the stiffness or the fact that I probably make more reps with it.

In the solo I switch about every 15min from sitting with the bent to kneeling with the straight. But that is mostly because of my knees and butt.
P

l'oisea,
Be content in the fact that you have passion about paddling. So many people in this country have little. They can't wait to retire and then go back to work because they have nothing to do. We are lucky that canoes and related equipment are relatively cheap compared to many other hobbies. My Dad once collected cars. He had some fancy ones, and once owned 23 that were stored in a warehouse. He made some money and got out of it. Then he collected old firearms "because they were a lot cheaper than cars." It is possible for the canoe addiction to pay for itself with careful shopping and good repair work.

My favorite paddles are ones I have made or Sawyers. Each person has to decide how much they are willing to pay for an instrument of joy that they are going to use thousands of times a day when they are on the water.
Last edited: Sep 19, 2014

There really wasn't anything special about the rectangular blade shape of the Landry-Blackburn Honey Island paddle, which Clements and Mitchells and many others already had. The difference was the big size. The theory of many solo sport canoeists of the early 80's, such as Mike Galt, was to have a big blade for slower cadence correction stroking--in contrast to the high cadence switch paddlers with smaller racing blades.

The really revolutionary idea was Galt's S blade. He took the Blackburn Honey Island, added a 2.5 degree shaft bend and also a curved blade, and named it the Lutra. Here, again from Mike Jones via Mickey Landry, is one of the first Lutra Pro paddles and then a picture of Bardy Jones, the famous Everglades guide, contemplating one on a Pat Moore Proem. 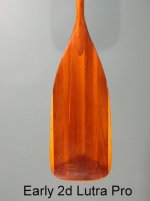 The Lutra is one powerful cruising blade, and it's very easy to produce corrections with it's magnum blade and S curve. Because of the structural strength of the curve, the blade was made very thin. Mine has a 33" shaft and I wouldn't want it to be longer with a magnum blade. (I was 5'-9.5" when I bought it in 1984 and am an inch shorter now.) Any longer would be too much leverage for flatwater traveling, in my opinion.

The legendary and somewhat over-hyped Quimby paddles also started off at magnum lengths of about 25", and then had at least two successive downsizings.

I only use my carbon ZRE's now, but as a non-racer, I always recommend the flexible shaft option for cruisers to cut down on the bone-jarring shaft stiffness. I also like the larger Outrigger blade for slower paced cruising. I use the 8.75" blade, but ZRE makes the Outriggers up to at least 9.5" in width.
Last edited: Sep 18, 2014
G

I'd agree it really does work. It's slow cadence, not particularly high effort except when you get going, and extremely easy to go straight.

And yeah, I've had other hobbies. They come and go, and then sometimes come back again. A guy my age should probably be more interested in running wild rivers of class 3 and 4, but that sounds stressful to me. I've had too many stressful hobbies. It's nice to have a few that are 'boring'.

What is the total length of the paddle?
G

So either the shaft and the blade measurements overlap slightly, or the Fox is actually longer than 54". Or it wasn't a Honey Island blade (see my next post).
Last edited: Sep 18, 2014

24.5 inch long blade is long for a Sugar Island shape blade. Most are 21-22 inches. Time for a tape measure. Sometimes the eye fools.
G

It probably was a Sugar Island Blade.

Like I said, shafts looked the same length, so that makes sense.

Oh and I think I meant two inches longer... Ha. And even that doesn't make sense by my maths.

Funny how emotion plays with data over time. Mike was the most visible proponent of the Lutra but Frank Hosford, his partner at Lotus, clearly stated it was a design done over time by a group of paddlers including Mike. The claw tip helped the timid get their catch into the water more aggressively than intended, and trailed with grip thumb down, provided additional J correction. As such it was a fine entry to intermediate stick, to too finely made to be available at entry pricing. Strangely, the ash/hickory edging was always left blunt, so the things didn't slice well. Both bent and straight had fuller shoulders than were helpful. The bent was very nice at the time. but it's an ornament now, and it was a production stick, no choice in blade size, shaft or grip. Eric Schooley's Ibis paddles were later, custom sticks that performed much better in the water. My straight Ibis is a nicely done stick with tight edging but the S compromises slicing, as the power and backface camber must be dissimilar regardless of how well faired.

Quimby paddles were superior in options, design and workmanship, coming in six blade sizes and multiple grips and bend angles. The FreeStyle blades were a couple inches longer than the cruising blades, but all blade sized had relieved shoulders to work under the boat and rounded tips to ease the catch. Power and backface camber matched so Quimbys sliced where desired. I used to use his large, 26", FS blades, still have a straight and a bent in that size, but have devolved to his medium sized FS blades as joints suffer various indignities over the years.

Other great paddles include Pat Moore's wood and composites. Pat's cedar paddles were masterfully designed and built but always seemed to split at the tip. His carbon composites are even better, but I don't particularly like the top grip on mine. Pat didn't seem to palm roll, so his grips always seemed small to me. Coming out of a mold, there was no choice as to blade, shaft or grip sizing, but the blades had relieved shoulders and camber well matched to enhance slices.

Grey Owl's Fleetwood is a fine intermediate straight blase in the $125-150 range, but no choice of blade or grip sizing. Bending Branches has a nice stick at similar pricing. Tightly edged with center ribs smoothly faired and rounded tips, both slice well. For custom fit blade, grip, shaft and bend choices one needs look to Cricket or Dog Paddle, but pricing accelerates steeply, as it must, when the buyer selects dimensions. Mike at Crickets seem strongly influenced by Craig Quimby's designs, Dog Paddles have Marc's own, wider, shaping with lower aspect ratio. pricing of Crickets and Dog paddles suggest the buyer have a pretty good idea about size and shape needed, both running $250 and upwards. A Quimby will double those price points.
Last edited: Sep 20, 2014
G

Dave gave me the actual measurement. 35" Shaft, 23" blade which gives 58" length. It gets longer every time I mention it! So apparently when I deem something to be two inches longer, it is actually double that. I guess it's better to underestimate these sort of things
You must log in or register to reply here.

Fears while paddling or on canoe trips
2 3 4