I'm not able to view photos like I used to. The problem seems to be where photos are posted as thumbnails at the end of the text. When I click on a thumbnail photo to enlarge it I get a black screen with arrows left and right and an X box in the top right corner. If multiple thumbnails are posted, none are available. I can see Canotrouge's thumbnails at the end of his text, but can't enlarge them. When I research old build threads photos that I've enlarged in the past no longer can be. This has been going on for a couple of months.

What I think I observe is that people are posting photos as they have successfully in the past, but the ability to enlarge them has gone away. My experience may be unique to my hardware/software.

When I go back to the image of the Mule Deer I posted above, and select “edit,” I am offered the following choices after “Insert” thumbnail, small, medium, large, full size and remove. My advice is to NOT select thumbnail. I also recommend to not select full size, which is too big for this site. I think you should go back to your posting, canotrouge, and hit edit. Then select insert medium. I think you will be pleased.

The main problem for me might be that since the computer died I do everything from my stupid phone and that things ain’t easy to work with!! I will try again an other time!! Thank you for all the support!!

I’d like to explain why I deleted my last post. When I first joined canoetripping, I tried to upload photos by directly clicking “Upload Attachments.” That did not work for me at all when using my Mac. Then Dogbrain told me to initiate uploading photos by first going through the mountain icon in the row above. He detailed a multistage process that worked very well.

Recently, while relaxing in our sunroom, I have uploaded a few photos from my iPad while beginning with the mountain icon. I was then given a choice of my photo library or taking a picture. I chose the photo library, and selected the desired image. This worked very well.

While out walking our dog Shadow after lunch, I wondered if the problem canotrouge and others were having might be because they went directly to upload attachments, completely bypassing the mountain icon. So I came home, clicked directly on upload attachments, and then selected the camera icon. I took a picture of our resting dog, and then clicked “done” in the upper right. A few seconds later, I received the choice of insert thumbnail, small, medium, large or full image, I selected medium, and it appeared. I then selected “post,” thinking it might disappear, as others have suggested. But no, there it was! Damn!!

But then I thought maybe it wouldn’t work with thumbnails, so I edited my posting, and selected insert thumbnail. And there it was! Damn!! But perhaps, like others have complained, I wouldn’t be able to enlarge it. But I could! Damn!

So I felt embarrassed. No matter what I did, it worked, even when I thought I was doing it incorrectly. So I deleted my posting.

All I can think of now, canotrouge, is that maybe your iPhone is so old that it may no longer be compatible, with the site since its last upgrade.

I've been paying Photobucket $8/month for their service and storage.
They are a lot faster than ever before, and easy to navigate.

Here I followed Paddling Pitts advise, and it works great, from my Home Computer.

No need for Photo bucket .
Thanks ! 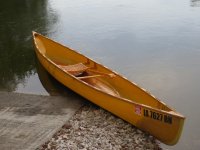 Jim, your embedded photo looks good. Clicking on it (e.g. to get a larger view) gives the problems everybody is complaining about, e.g. seeing half of the image, and not being able to scroll to see the whole thing. Also, clicking on your "attached files" does the same thing. 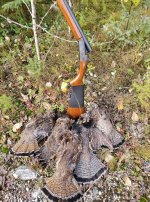 The only kind of meat I got this year, but lots of it, just ate the last ones New Years Eve.

I don’t know what the mountain icons is, and believe me I tried to resize clicking on medium lol

Just like I just did above!! Use to work just fine... not anymore!

Mason said:
Jim, your embedded photo looks good. Clicking on it (e.g. to get a larger view) gives the problems everybody is complaining about, e.g. seeing half of the image, and not being able to scroll to see the whole thing. Also, clicking on your "attached files" does the same thing.
Click to expand... 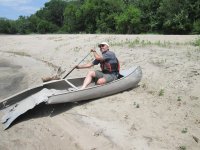 Canotrouge said:
I don’t know what the mountain icons is, and believe me I tried to resize clicking on medium lol
Click to expand...

At least I could see the whole enlarged photo when I clicked on it so that's an improvement.

Sorry for the nuisance with the photos. Now that the holidays are mostly behind us, I will bear down on it.

Thank you DaveO! I think if there is a way to streamline/simplify the process it would be great!!

Canotrouge said:
I don’t know what the mountain icons is
Click to expand...

Just went in there and it only give me full size as an option on less I enter my own width and hight... which is a bit of a gamble just punching # that I have no clue what will come up with it! I don’t call that simplicity ?

I give it a width of 900. The height is then adjusted automatically.
You must log in or register to reply here.