Harold Deal died three days ago. He was the best all-around canoe paddler I've ever met in my life—24 times a solo whitewater racing champion, one of the founders of flat water freestyle, a remote wilderness tripper in Canada and Central America, a photographer, a canoe designer (Hemlock SRT, Hemlock/Mohawk Shaman, and contributor to Curtis Dragonfly and Crossfire), and very down-to-earth and humble man.

Here is his obituary:

In my last communication with Harold on June 30, 2022, he sent me this picture of himself in 1963 or 1964 working on his family birch bark canoe, which is currently for sale on the Hemlock Canoe website. 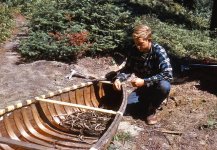 Sorry for your loss Glenn.

Good dude for sure. I did not know him personally but always thought it would be cool to paddle the Lehigh with him. Condolences to his family and friends.

There is a Meet Harold Deal page on the Hemlock website. There are also many more pictures of Harold on the Hemlock site under the Photo Albums for the SRT, Shaman, Canoe History, and Hemlock Canoe Adventures albums as well as in the Ontario Lake Crossing pages.

I am not a gregarious person and ill at ease in most social settings. Meeting Harold for the first time was anything but uncomfortable. Paired in the same vehicle on a river shuttle, I found we had a lot in common, both in upbringing and in interests. Harold was a good listener and never spoke out of turn or of superfluous things. The perfect paddling partner, I wish I had met him much earlier in my life.

"It's amazing what a paddler can learn and experience with an open mind and time in a canoe."

in person he was so quiet and unassuming.. No braggadio.

Met him a couple times…wish it were more. Yellowcanoe said it perfectly.

He was honored as one the the 100 "Paddlers of the Century" by one publication:

If an award was ever given for unsung paddling heros, it could well go to the modest Harold Deal, 51, of Riverton, Penn. An 18-time Open Canoe National Champion, Deal is largely credited with inventing “Freestyle” canoeing, where participants paddle choreographed routines to music. The discipline even has a stroke named after him, the Hiding Harold. He is also an accomplished designer, inventing such canoes as the Crossfire (before Dagger used the name for a kayak), and the Dragonfly and Shaman. He also designed a race paddle for Sawyer Paddles and Oars. Instruction also takes up a good chunk of his resume, with many of his techniques employed by such canoe icons as Tom Foster and Bob Foote. In his canoeing instructional video, producer Kent Ford even thanks Deal for his contributions with an end credit. “He’s very unassuming,” says friend John Rako. “Most people don’t even know about him.”
Click to expand...

Harold designed the ZRE Power Curve paddle, which he uses in the two video I posted above and pictured here: 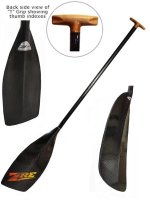 Harold also co-designed with Bob Foote the curved blade Sawyer Stingray paddle, which is no longer in production, pictured here with a blogger: 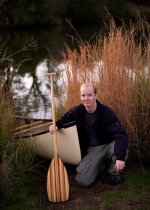 RIP Harold. Thanks for all your contributions to canoeing. I have been thoughourly enjoying the SRT I got over the summer, which served me well in Wabakimi.

"Deal is largely credited with inventing 'Freestyle' canoeing, where participants paddle choreographed routines to music. The discipline even has a stroke named after him, the Hiding Harold."

I'll add another bit of Harold Deal history because histories of our sport should be written somewhere. Harold twice told me the story of how he invented the ancestor of what is now called the Hiding Harold move in flat water freestyle terminology.

Today, the Hiding Harold is usually begun with the canoe heeled over so the "audience"—on the shore or in other boats—can only see the bottom of the hull, not the paddler, and then the paddler pivots the canoe with an underwater gimbal stroke. Elaine Mravetz (RIP) does that at the beginning (and also the end) of her freestyle exhibition in this video:


However, a gimbal pivot is not how Harold Deal originally developed the stroke. He was paddling some lakes in central Florida in his Curtis Dragonfly with Eric Schooley, probably sometime in the late 80's or early 90's. Schooley made Ibis Paddles and was one of three paddle makers, after the Blackburn brothers and David Mitchell, to make Lutra paddles, which were popularized by Mike Galt and later freestylers.

There were people on the shore watching Harold and Eric paddle by. Harold suddenly heeled his boat way over so only the bottom of his hull was visible to the onlookers and he continued paddling straight with an underwater forward stroke. Eric said, "What the heck are you doing, Harold" . . . who replied, "hiding."

Harold found out that at the next year's freestyle competition—in the upper Midwest, as I recall—someone used the move and called it the Hiding Harold. Perhaps it was Eric Schooley himself, or at least someone Schooley had told about Harold's invention in Florida.

Harold also told me that he frequently would use his underwater forward stroke Hiding Harold move for long distances when passing by fisherman and other boaters on his home Delaware River, just to puzzle and entertain them as to why an "empty" canoe was floating by.
You must log in or register to reply here.
Share:
Facebook Twitter Reddit Pinterest Tumblr WhatsApp Email Share Link
Top