There's a new resource for anyone interested in carving their own traditional canoe paddles. Graham Warren of Moosehead Canoes & Paddles has released released his latest book, 100 Canoe Paddle Designs. Most of us probably have heard of his prior publication, Canoe Paddles: A Complete Guide to Making Your Own. Rather than a how-to book, this new publication features basic outline sketches, measured offsets and historical background for a wide array of paddles. Here's a glimpse of the cover... 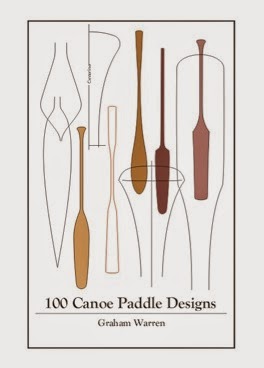 It's a basic black and white print but still a great read for the paddle addict. Graham documents a wide cross-section of functional designs from around the globe. In fact, half the book is devoted to paddles outside North American "canoe country". There are examples from the Caribbean, South America and the Pacific Islands. For the history buff, he has included ancient paddles unearthed in archaeological digs in China, Denmark, The Netherlands, and the U.K. And for owners of heirloom cedar canvas canoes, he has included offsets for famous brands like Chestnut, Peterborough and Rushton replicated from historic catalogs. Also neat is a little experiment he calls the "Consensus Paddle". Offset data from 50 paddles in the book were entered into CorelDraw and a composite sketch created. The blade design from this global pool of paddles is an elegant looking blade which looks very suitable for a deep-water solo.

That's one I have got to get! Got his first one years ago and have made a lot of paddles from it.
You must log in or register to reply here.