Hi all, I have been lurking for some time, but cabin fever has prompted this introduction. I am in my early fifties and have been canoeing off and on since my teen years. I like to go to Woodland Caribou and Nopiming for tripping purposes. Last year in june we had to cut our way in to Haggart Lake because of serious blowdown, making a one day trip into two hard days, but it was well worth it. The park staff has since cleared both the Garner and Wallace routes into WCPP, but there are still many portages in the park that are not passable.

I also like to build canoes, although I have only built 3 from 2 moulds. The first was a 17' 4" tandem of my own design, which has too much rocker for my taste, and is rather large, but it is not too slow and can take a huge load. The second is a 16' solo, which I also designed and built 2 with a friend. The solo canoe was good enough for me to keep the mould, as it is a real pleasure to paddle. Both canoes are 3 layers of kevlar in the layup with the tandem coming in at 44 lbs. and the solo at 30 lbs. I have never attempted a cedar strip build.

I have all kinds of pictures since one of my hobbies is photography so if anyone is interested I could post a few if I can ever figure out how to get them from my Mac onto the page here.

Ok, let's see if this works. 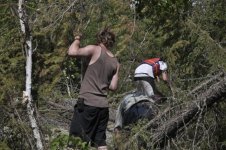 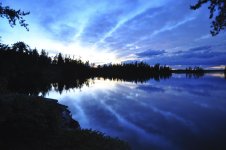 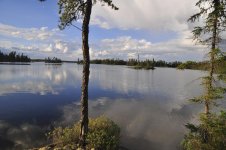 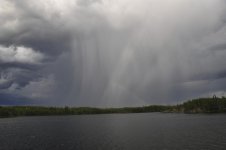 Welcome from another Manitoban.

I think perhaps we may have met out on Crystal Lake a couple years back. I do remember the fellow we spoke with telling us that he and a friend had both built kevlar solo boats.

No, it wasn't me. Might have been my friend, though. Tall guy, grey beard. I like your posts and the wood and canvas building. Lots of nice pics of many places that I recognise. I have never done the bird river route, though.

Yes, sounds like you friend, I have a picture of him in my trip report over on MyCCR.

We are going back to the Bird in September, intending to push up through Snowshoe Lake and upstream further on the Bird in Ontario.

I will have to check it out. What is MyCCR?

I'm a more prolific poster over there, but I spend more time here of late since I find this forum much more laid back. Much like sitting around a campfire and watching the stars in quiet contemplation...

For you Manitobans there is a book or some for sale.

As for me I would get waylaid in Red Lake.
G

Greetings LF_Tripper, and welcome. I'm looking forward to hearing about your canoes and where they take you. I like your photos.

Welcome to the board LF-tripper. I used to enter WCPP from Manitoba so am glad to hear the route is opened up from Wallace Lake. It is about time I got over there again. I have followed Karin's reports and may try a trip that stay's in Manitoba. There appears to be some interesting travel available.

Hi LF_Tripper,
Welcome, nice pictures, your canoe building sounds interesting, you should post some pics and a story over at the thread DIY.

You folks are lucky to have WCPP so close. Sure, long winter, but nice tripping out there. 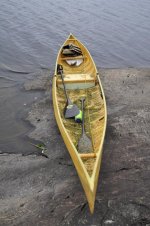 Thanks for the warm welcome. Here are some pictures of my amateur solo canoe. These were taken last fall on my solo trip to Haggart Lake from Wallace. On this trip I took the windy creek From Wallace to Siderock, which had about 6" of water and wild rice so thick I could hardly see where I was going. Filled the canoe with rice. I took this pic on Siderock after exiting the creek and climbing over the large beaver dam. You may notice some unique features with this canoe. That is the beauty of DIY, you can toss convention and build it however you like.

BTW my grey owl carbon bent shaft broke before Crystal as I stepped on it during a portage. My home-made beater paddle has a foam core so it can handle much more abuse. It was sufficient for the rest of the trip. It has been my favourite paddle since it was built 3 years ago. It is not pretty, but is an absolute joy to use.

Anyway, I camped on Broken Arrow the first night due to strong headwinds from the southeast, otherwise Haggart would have been the camp spot. I didn't mention that I got up at 5:00 and drove to Wallace to put in at 8:00 that morning. The day was long enough by the time I camped so I thought that stubbornly continuing into strong headwinds at that point would not be a safe decision. The camp spot on an island was beautiful and welcome shelter from the loud thunder shower that night. Oh, to be in the wilderness! I did not see a single canoe during the whole 5 day trip. Anyway, more pics. 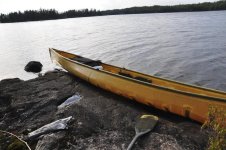 Canoe on Haggart Lake. I reinforced my paddle with kevlar. 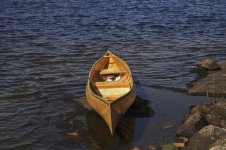 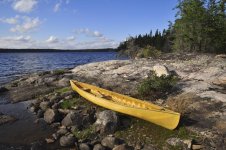 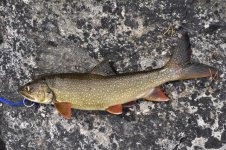 I can see why some paddlers prefer the solo canoe. A good solo is surprisingly fast and sea worthy.

The design of this canoe is between that of a Magic and a Prism, having the size of the Prism with the rocker very close to the Magic.

I have seen the twin of that canoe, very distinctive.

The twin is different in a few ways. I looked for the pic on CCR, but could not find it. For some reason I can't get the pic to upload, but the twin has wood gunnels, thwarts, and a wood seat hung from the gunnels. I don't like thwarts and my gunnels are composite. The twin canoe also has a clamp-on yolk, while mine has a composite yolk that attaches with velcro. Light and efficient, the yolk weighs almost nothing and takes no time at all to attach.

Not sure why, but now It wants to work. 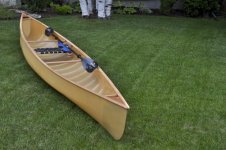 That trip report is hiding in the Ontario folder, 3 pages in. http://www.myccr.com/phpbbforum/viewtopic.php?f=108&t=40253

Most of the way down the first page you get a back view of the boat in question. I didn't feel like I should post a front view, not having the fellows permission to do so.

Yes, that is the canoe and the friend. Thanks for respecting the privacy thing. That was the canoe's maiden voyage. I must say I am surprised, although maybe I shouldn't be, and maybe it is because I always go in June or September and rarely see anyone. You got all of your facts right in the report. You either take notes or have a very good memory. I suppose it is a small world after all.